Why Dalit BJP MPs in UP Are Protesting Against Party Leadership

The Dalit MPs' dissent comes in the backdrop of nationwide Dalit consolidation against the Narendra Modi government.

Lucknow: More trouble for the Bharatiya Janata Party, which has been facing reports of Dalit anger recently, may be in order. At least four of the saffron party’s Dalit MPs from Uttar Pradesh have openly voiced their dissent against the way the party leadership has handled concerns and issues of Dalits in the state.

The Lok Sabha members – Savitri Bai Phule from Bahraich, Chhote Lal Kharwar from Robertsganj, Ashok Kumar Dohre from Etawah and Yashwant Singh from Nagina – have alleged that pertinent issues such as the dilution of the SC/ST Atrocities Act, the impression that the saffron party does not support the reservation policy and escalating police atrocities against Dalits have not been handled well by the party leadership. One of them also alleged that UP chief minister Adityanath did not treat them with respect when they tried to raise these issues with him.

The Dalit MPs’ dissent comes in the backdrop of nationwide Dalit consolidation against the Narendra Modi government, a reflection of which was the Bharat Bandh called by several Dalit groups on April 2.

Phule, who many say has been upset for quite some time now, took up the cudgels against the BJP and organised an independent rally in Lucknow on April 1. The colour of the event was not saffron but blue, with Bahujan Samaj Party founder Kanshi Ram’s portrait at the centre of the stage. During the event, Phule told reporters, “I am India’s MP and it doesn’t matter if I remain MP or not, but will not tolerate any changes to the constitution and reservation.” Though she did not take any names, the ire of speakers at the event was evidently against the Modi government.

The rally was called the Bhartiya Samvidhan and Aarakshan Bachao Maharally (Save Indian Constitution and Reservation rally). The event showed the cracks in the seemingly-invincible BJP. BJP insiders told The Wire that nobody in UP had imagined that a party MP, and that too a Dalit, would muster such courage just one year ahead of the 2019 general elections and organise a rally against the party. 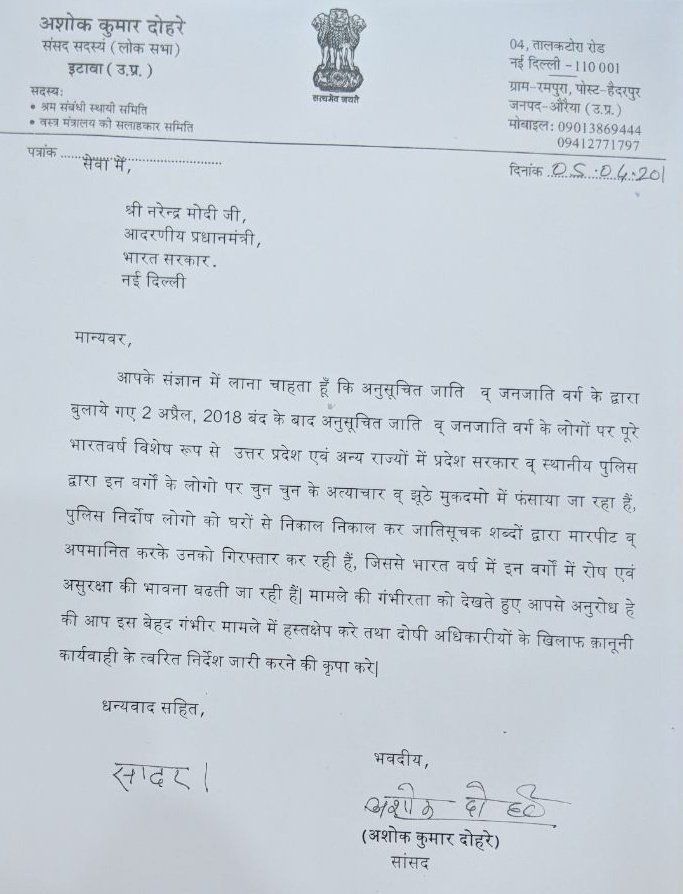 A day after her rally, the Bharat Bandh turned violent in UP even as the state government miscalculated its strength, and the protest resulted in large-scale violence and several deaths.

While BJP was finding it difficult to contain Phule’s anger, another BJP MP, Chhote Lal Kharwar from Robertsganj, raised his flag of protest. He alleged that he met Adityanath twice but he offered no help and instead insulted him (“Mukhyamantri se do baar mila, madad nahi mila, daant ke bhaga diya“). Kharwar claimed that he was being discriminated against, and that his brother was ousted from the post of block pramukh by local BJP leaders. He also said that he was attacked but the police did not register his complaint.

The opposition soon took up issue and made it a matter of Dalit self- respect, as the MP claimed he was scolded and shooed away by the chief minister.

Kharwar has put down his allegations and woes in a letter to Prime Minister Narendra Modi. In the letter, he has mentioned that he had to approach the National Commission for SC/ST for relief. The irony here is that Kharwar heads the state unit of BJP’s SC/ST Cell. When The Wire tried to get in touch with Kharwar, his aides said that he was in hospital visiting an ailing friend. 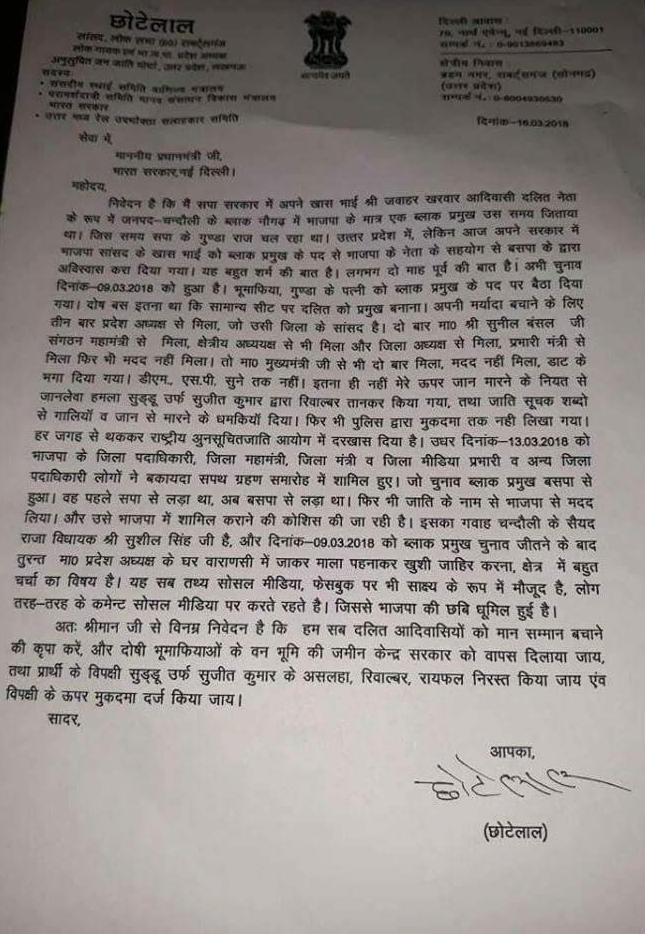 As the BJP was busy promoting its campaign for Dalits, and simultaneously adding “Ramji” to B.R. Ambedkar’s name in official records, another Dalit BJP MP, Ashok Dohre from Etawah, complained against the UP police, saying it was targeting Dalits. He alleged that the state police was using foul language against Dalits, and registering false cases against them in the wake of violence during the Bharat Bandh.

In his letter to Modi, Dohre wrote that Dalits were specifically picked up and framed in false cases. Dohre told The Wire, “I was in Delhi as the parliament was in session. I received several phones that Dalits are being targeted. This was happening everywhere including UP. So I met the prime minister and handed over a letter. He had a word with several state administration officials regarding the issue.” Dohre praised Modi, terming him as his leader.

Similarly, Yashwant Singh, a Jatav MP from Nagina in western UP, in his appeal to the prime minister said that ahead of the 2014 general elections, Modi had raised a lot of hope among Dalits as he had promised a government for the poor, underprivileged and Dalits. “…but even after four years, your government has not fulfilled even a single promise made to 30 crore Dalits,” he wrote. 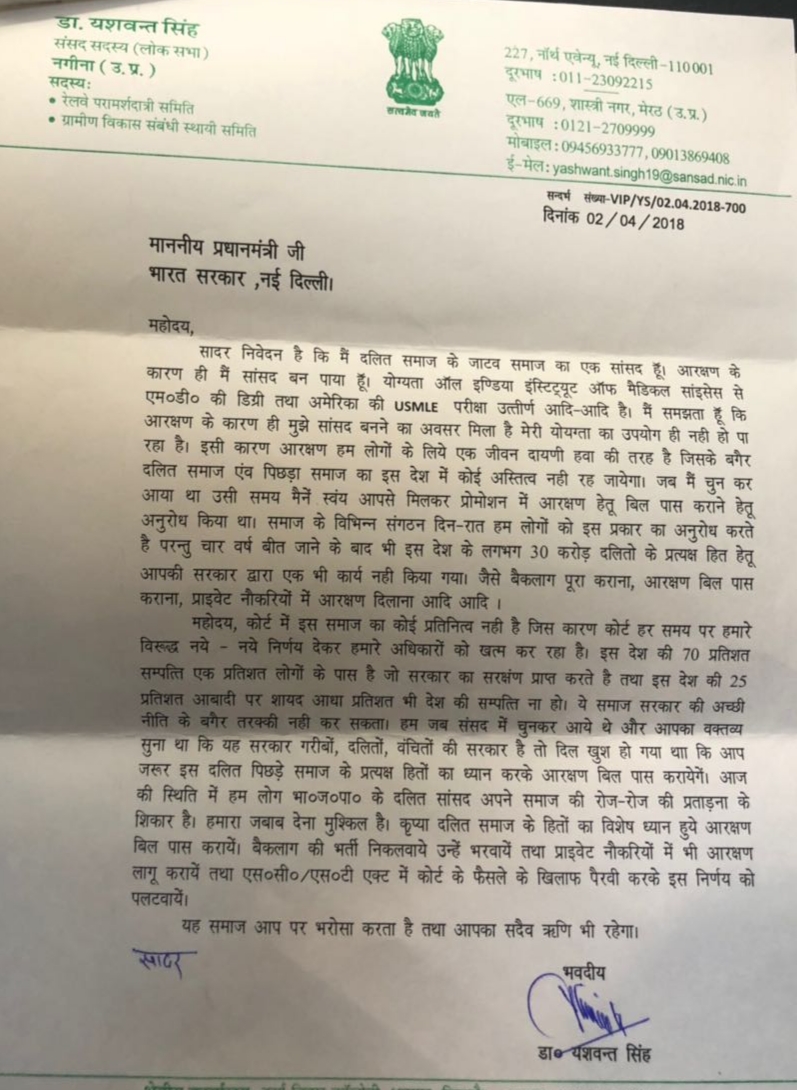 He said that the reservation policy in India is a lifeline for Dalits, but there is a sustained effort to take it away now. “We are not able to face our people,” he said, adding that the Modi government should immediately implement reservation in the private sector, fill government posts meant for SC/STs, think about reservation in promotions and intervene to get the recent Supreme Court order on the SC/ST act reversed.

With a year left before the next general election and the Samajwadi Party and Bahujan Samaj Party sealing an alliance, things are taking a turn for the worse for the BJP. Although the party managed to win an extra seat in the Rajya Sabha from the state by getting MLAs to cross-vote against the BSP, it has failed to contain anger within the Dalit community. It was a Dalit candidate from the BSP who lost the bitterly-fought Upper House polls. The BJP used all its tactics to keep the BSP out of parliament.

For the BJP, which celebrated its 39th foundation day on Friday and is in damage-control mode (Modi has invoked Ambedkar in most of his speeches since April 2), dissent within the party, especially coming from Dalit MPs, will come as yet another setback in UP, where it recently lost two crucial by-polls.

These developments have given the opposition an opportunity to launch a full-throttle attack against the Adityanath government. “There are many BJP MPs in line. Many more will come up and raise their voice. BJP is now exposed. Dalits are feeling cheated. The MPs now realise that they have to show their face to their voters and community,” Sunil Singh Sajan, SP spokesperson and member of legislative council, told The Wire.