'Every amenity reaches us late. Be it basic sanitation, water or health care.' 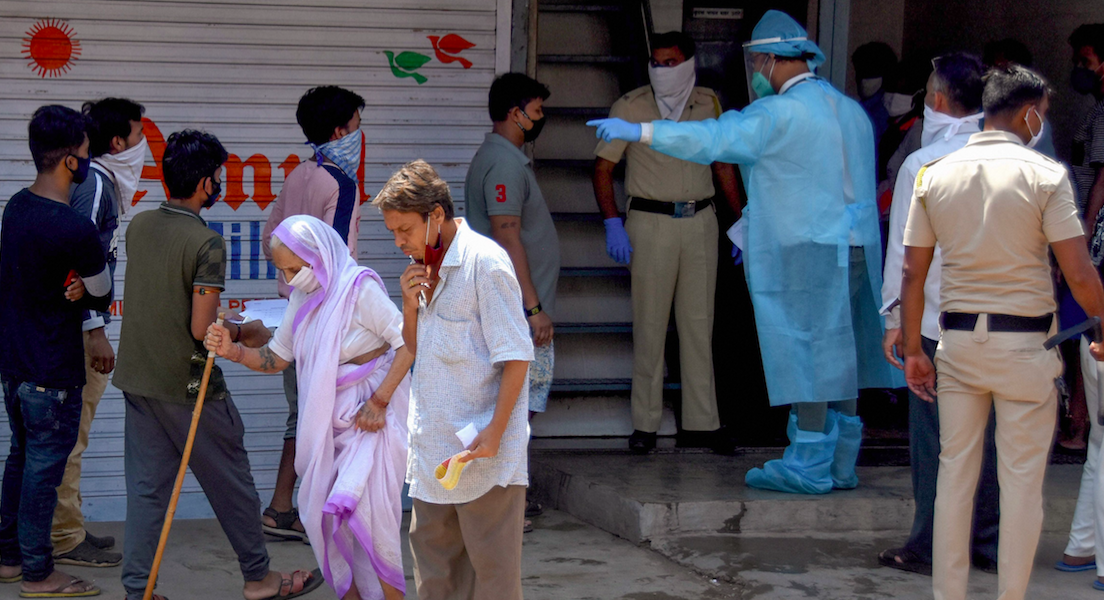 People stand in queue to visit a doctors clinic to get a medical certificate, during the ongoing COVID-19 nationwide lockdown, at Dharavi in Mumbai, Sunday, May 3, 2020. Photo: PTI

Mumbai: On April 9, 45-year-old Amit* developed mild fever and cough – which is exactly how it started for most COVID-19 patients living in the 600 acres that make up Asia’s largest slum, Dharavi.

Knowing fully well the fatal impact that the infection could have on him and his community, Amit had immediately approached the Brihanmumbai Municipal Corporation (BMC)-run Sion hospital and asked to be tested.

The hospital refused and without tests, he was told he was suffering from a “regular strand of viral infection”. He was asked to “rest at home”. On April 27, his condition worsened, and he was rushed to GT hospital. On April 29, he died.

Amit was tested for COVID- 19 infection a whopping 18 days after showing symptoms and he had tested positive just a day before his death.

Amit’s mother, wife and two children, who he shared living space with for nearly two weeks after he began to show signs of the infection haven’t been tested yet and the BMC has asked them to wait until they “show symptoms”. Amit’s daughter, in a video released soon after his death, has accused the municipal authorities of negligence.

His nephew, Atish*, an anti-caste activist and also a BMC staffer, who was forced to lift Amit’s body and transport it to the crematorium without any personal protection equipment (PPE) has not been tested either.

“I was around when my uncle passed away. The hospital staff asked two ward boys and me to lift the body and shift it to the crematorium. All three of us were compelled to do this without any protective gear. I have since isolated myself in my home in Nerul,” Atish shared with The Wire.

Atish, after waiting for the municipal authorities for many days, underwent tests and is awaiting a report now.

Atish says the neglect and the rot in the system stems from something deeper. “You won’t find the municipal authorities behaving this way with residents in a savarna, upper class, gated society, will you?” he asks.

The initial cases in India were almost exclusively of people who had travel history to countries that have a high number of cases.

But as days passed by, more and more people from slum settlements started testing positive. While controlling the spread has proved to be a nightmare for civic bodies, Atish says the state’s apathy, however, is more evident in handling Bahujan patients. “The virus doesn’t seem to be discriminating but our state does. I work with the civic body; I see it closely. There is a marked difference in the way they treat a patient from the slum and the way they handle someone from an upper caste space,” he alleges.

Dharavi continues to be one of the worst impacted areas in Mumbai. By the end of May 3, 590 persons have tested positive and 20 have died. At about 10 lakh population, Dharavi is one of the biggest slum/semi- slum clusters sheltering Dalit-Bahujan —interstate and intrastate — migrants. Similarly, slum clusters in parts of Worli, Kurla, and Mankhurd have also seen a large number of cases.

Sanjay Shinde, convener of NGO ‘Aapli Mumbai’ agrees with Atish’s observation. “The state response has been painfully slow in slum pockets. Even when the BMC finds a positive case, the BMC workers only screen people for symptoms. Unless a person falls seriously ill or the community starts agitating, tests don’t seem to be happening in many slums,” he says.

BMC officials, however, say they have been following the protocols and the guidelines laid down by the Indian Council of Medical Research (ICMR). “We have been testing a lot more than anywhere in the country. We have been closely monitoring direct and high-risk patients and around the seventh day (ICMR rules recommend tests anywhere between 5 to 14 days), we are organising camps,” said Dr. Daksha Shah, deputy executive health officer.

Shah says there has been a lot of frenzy and panic among people and responses aren’t always informed.

Twelve kilometres away from Dharavi, in Govandi’s Lumbini Park, in a Buddhist chawl named ‘Panchasheel’, 12 persons have tested positive for COVID-19. They got infected as they tried to help a female patient in the area reach the hospital. The woman died and many who had come in direct touch with her have tested positive.

The BMC claims to be conducting at least 4000-4500 tests every day in the city, but the process of getting tested was not easy for the residents of Panchasheel Chawl. Only after a series of video campaigns, slum-level agitations and media interventions did the BMC finally start testing in their area.

Quarantine is not the same for all classes in this city. Without access to clean, water how are they supposed to fight this pandemic? Worries continue as residents from #MEastWard struggle for basic amenities in #Mahul, a toxic hell @abuasimazmi @mybmcWardME @MantralayaRoom pic.twitter.com/ebN6NBNfvq

A young cultural and Dalit rights activist Sunita* had led the campaign. She questioned the authorities for openly discriminating against the Dalit community living in the settlement and not giving them adequate attention. Sunita, and five other members from her family have tested positive for COVID-19. 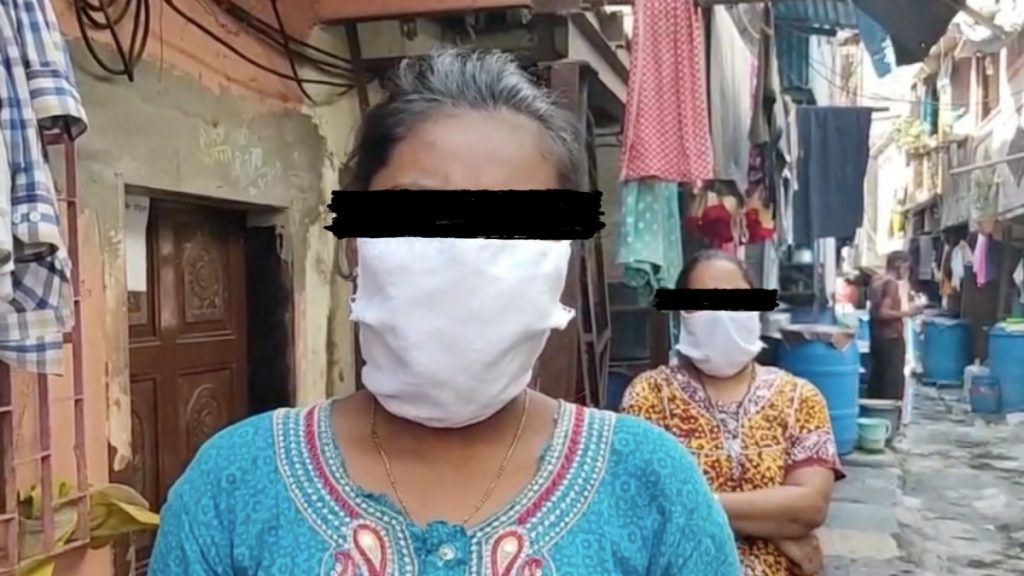 “I had no choice but to take to social media to get the state’s attention. It is not new for us. Every amenity reaches us late. Be it basic sanitation, water or health care. We know we will have to agitate if we have to survive,” she says.

On May 2, nearly 30 people from the locality, including Sunita, were moved to a quarantine centre in Videocon society at Mahul village near Chembur, which has been long declared “uninhabitable” by environmentalists and Indian courts because of several polluting industries present in the area. 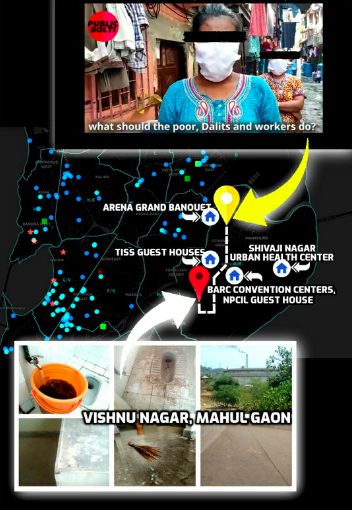 A diagram showing the quarantine centres between Sunita’s location and the one to which she was taken. Photo: Twitter/@@PublicBolti

Here too, Sunita along with other activists noted the terrible condition of the quarantine centre and alleged that only people from the slums were shunted to this particular quarantine centre.

“Only slum dwellers from Baiganwadi, Cheetah Camp, and other areas in Tilak Nagar have been moved to Mahul. You won’t see a single middle class or an upper middle-class person at this quarantine centre,” Sumit, a student rights and anti-caste activist said.

At the Mahul quarantine centre, over hundred people are lodged at present.

The facility, people say, is unfit for living, with lack of running water, filthy toilets and poor sanitation.

Between Govandi and Mahul, there are at least four other quarantine centres including the Tata Institute of Social Sciences.

“Here too, the BMC is segregating and discriminating,” Sumit, who has also tested positive, alleges.

In another case, a 30-year old man who works as a ward boy at one of the city’s premium hospitals tested positive for the virus on April 29.

He lived with his 17-member family in Wadala’s Korba Mithaghar area, a densely populated Bahujan settlement in the central suburb of Mumbai. While the hospital he works for has not extended any support, his family had to publicly narrate their plight on social media to get BMC to act on their case.

“But it’s already too late. Seven persons in my family have already tested positive now, including my old, ailing father and uncle. Until May 2, the ward-in-charge claimed there is a serious death of kits and that they are arranging for the kits but soon after I took to social media, kits were made available,” he said, further adding that the municipal corporation is playing with their lives.

“We had quarantined ourselves as soon as we found out about my brother’s report. But before that we were moving around, inter- mingling with people and those people must have mingled with so many more. BMC needs to prioritise our lives if it even wishes to stop the spread of this disease,” he added. All 17 have now been moved out, some have been shifted to a quarantine centre nearby and a few others to hospital.

Similarly, on May 4, around noon, 12 of those who have tested positive in Panchsheel Chawl were moved to a hospital in Shivaji Nagar.

Another 100-odd people, including older people and children, continue to be at the centre.

“We have never asked for five-star treatment. But the government should ensure human dignity, so their right to access healthcare doesn’t get compromised. Unfortunately, we have seen just that in the past month,” Sunita adds.

Note: Some names in the story have been changed to protect the identity of their holders.