Leaders like Mani Shankar Aiyar, Janardhan Dwivedi and Manish Tiwari are putting off an important section of voters: the OBCs. 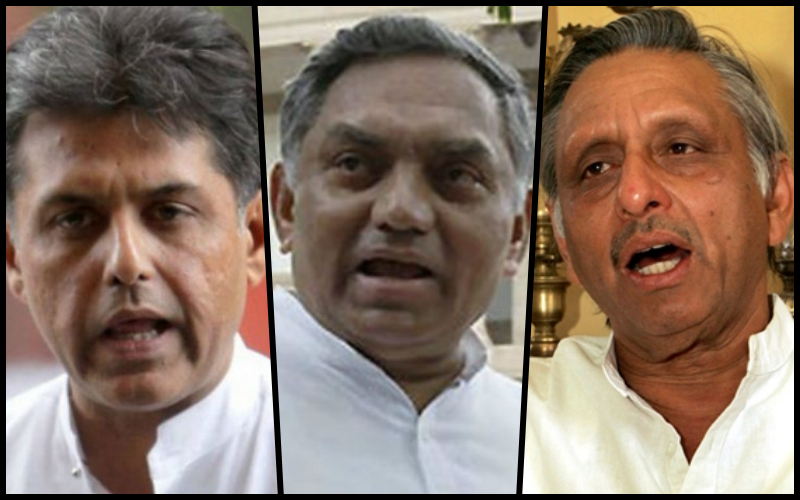 In 2014, just before the general elections, Mani Shankar Aiyar, a caste conservative of the Congress, made the Bharatiya Janata Party’s then prime ministerial candidate Narendra Modi a hero of OBC youth with his casteist jibe, inviting Modi “to sell tea at AICC meetings”.

This he did at a time when Modi was promoting himself as a ‘chaiwaala’ across the country. When Modi started telling the nation that he sold tea in his childhood and that his mother washed the dishes of other families, and OBC youth began getting attracted to him. The BJP’s political and social networks were willing to use this OBC attraction to come to power. Modi used Aiyar’s comment, and later Priyanka Gandhi’s comment, to his advantage. The casteist people within the BJP and Sangh parivar swallowed Modi’s caste language, as they realised it was the only way the OBC vote could be managed.

It is widely believed that north India is more casteist than south India. Modi knew that the caste conservatives in the Congress, like Aiyar, did not understand that. These were the likes of those who advised Rajiv Gandhi to take a stand against Mandal reservation. Such forces around him made him hate V.P. Singh, who stood by the OBCs and implemented the Mandal report. The BJP at the time was cleverer than the Congress: they diverted the Mandal question to the mandir (temple) issue without appearing to be casteist. But they were more casteist.

Yet another major Congress leader, Janardan Dwivedi, just before the 2014 elections, said that the whole reservation system should be reviewed. Manish Tiwari also took a similar stand on reservations. All these things did not bring Congress more upper caste votes but caused quite a number of OBCs, particularly the OBC youth, to go against the Congress.

Several BJP members speak against reservations, but they are not known as intellectuals who matter in the policy making of the party or the nation. Whereas Aiyar, Dwivedi and Tiwari are known as the intellectuals of the Congress, who sat in many policy-making bodies. The OBCs of the nation understand this. Somehow the Congress could not promote counter-intellectual voices from the OBCs within the party.

Occasionally, people like V. Hanumantha Rao countered them, but neither the party nor the media took them as seriously as the others. There is not a single OBC intellectual in the oldest party of India whose opinion is seen as important by the media and the nation. That is a tragedy.

Not that the BJP promoted any intellectual from that background. However, Modi is now their intellectual, leader, strategist and what not, and identifies himself as being from the OBC category.

Moreover, he knows how to handle the Aiyars or Chidambarams, using counter jibes like ‘Yes, I come from chaiwaala background, I come from a hard work background and not a Harvard background’. The OBC youth like this language because they have been humiliated by the upper castes – particularly Brahmin-Banias – for too long.

If Modi could not get votes, the Brahmanical forces in the BJP would have discarded him completely. Now they cannot; the party needs him.

Aiyar once again stopped a major change in the nation when he said “Ye aadmi bahut neech kisam ka aadmi hai” in the middle of the Gujarat elections, at a time when the OBCs and Dalits were swinging towards the Congress. Aiyar gave enough opportunity to Modi to stop that swing.

Another Brahmanical section of the Congress party was busy painting Rahul Gandhi as a Brahmin neta against an OBC neta. Some of them were putting posters with ‘Pandit’ added to Rahul’s name, giving the impression that he has now become a Brahmin of Allahabad origin. The OBCs may not dislike Rahul going to temples, as they – mostly in north India – do that too. But if he is projected as Brahmin of Allahabad, they will not vote for him.

In the backdrop of the Sonia Gandhi-Manmohan Singh regime being called ‘minority raj‘ by the BJP cadre, Modi’s Hindu-OBC raj certainly appealed to a small section – a section that was needed to win the elections. If the caste conservative forces within the Congress project Rahul as a Pandit, with a reference to Pandit Jawaharlal Nehru’s Brahmanical origins, it is unlikely that the OBCs like that. The OBC hunger for power and identity should not be underestimated.

The post-Mandal vote base of the Congress was/still is in non-Shudra upper castes, Dalit/Adivasis and minorities. The OBCs have remained away from it. For a long time, they did not trust the BJP; in fact, till Modi projected himself as an OBC and removed Brahmanical forces from his camp, they did not trust him either. Only when he sidelined L.K. Advani, Murli Manohar Joshi, Arun Shourie and Yashwant Sinha, who were known as anti-OBC reservationists, they started trusting him.

Now Modi has come out clearly saying that he is against reservation for castes like Patidars, Jats, Gujjars, Kapus and so on. The Congress has an opportunity to work out a new formula for reservations to accommodate them. But the English-educated caste conservatives in the Congress will certainly go against any reasonable solution to the problem.

The results of Gujarat elections show that Aiyar cost the Congress a sizeable OBC vote since Modi has used his remarks very well. But there is a bigger challenge before the Congress. If it runs a Modi-centred campaign, he will project it as an anti-OBC campaign. Though he has not done anything new for the OBCs, he will still use the OBC-Hindu asmita – and that will help him.

Another major problem the Congress has at hand is the need to work out a reservation formula to accommodate the Shudra upper layer, which has no significant place in Delhi’s administrative and diplomatic circles. Since Shudra feudalism has disappeared, their place in modern Bania capitalism and the Brahmin knowledge economy is minimal. They certainly need a new place in Indian caste-crony capitalism and globalised and liberalised private and public institutions. Otherwise, they will keep hanging onto Modi’s Hindu-OBC asmita politics and vote for him again in 2019.

Kancha Ilaiah Shepherd is a member of T-MASS, an organisation that works for social justice.