The Theresa May government, worried about upsetting powerful Hindu groups, is hesitating to go ahead with consultations on the caste discrimination issue.

British prime minister Teresa May at a temple during election campaigning. Credit: Reuters 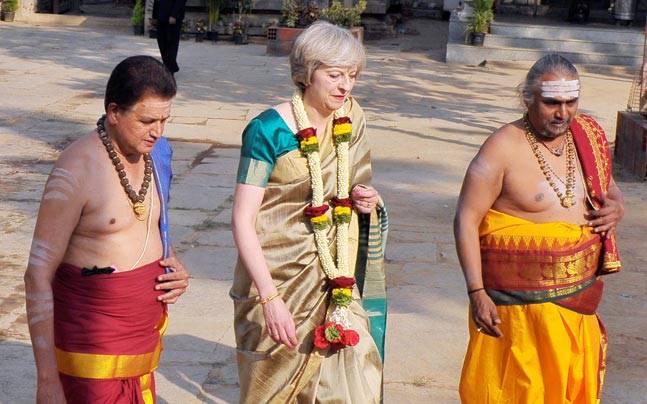 British prime minister Teresa May at a temple during election campaigning. Credit: Reuters

London: Caste is rearing its ugly head again, this time in an unlikely place – the United Kingdom. Under pressure from rights groups and sections of civil society, the Theresa May government has moved to take its first steps towards banning caste-based discrimination in the public sphere. It has called for public opinions on whether caste discrimination will be best tackled by a ban on it through a new law or not, a consultation which will end on September 18, after which the government will take a final call.

However, the backlash from Hindu organisations, several of them close to the Sangh parivar, has been swift. They are livid at the government’s move and have threatened to derail it with all their might. This has now made the May government’s resolve in banning caste-based discrimination wobbly – it doesn’t want to appear to be taking on these vocal groups.

In fact, from at one time promising to ban caste discrimination in 2013, the May government has made an about-turn already, by now inviting public opinion on whether such a ban is even required. The government’s reluctance in biting the bullet on caste discrimination is now being seen as the surest sign of the ascent of the Hindu Right in the UK, a rise propelled by the financial clout of its British Hindu supporters and the tacit support of the Hindu Swayamsevak Sangh, the overseas wing of the Rashtriya Swayamsevak Sangh, the far-right ideological parent of Modi’s BJP.

Currently, there are no laws in the UK to deal with cases of caste discrimination. While discrimination has largely been found in South Asian communities, especially in the British Indian – there is no legal provision to tackle it. As a result, victims have been forced to approach courts for justice, but with a mixed success rate.

A 2010 report commissioned by the British government laid bare the well-entrenched caste discrimination that exists amongst the Indian diaspora in the UK. The report highlighted many instances, from that of Indian-origin and former mayor of Coventry Ram Lakha alleging discrimination from the Indian community during his election because he belonged to the Chamar caste to a businessman seeing employees quit after he revealed that he belonged to the lower caste. In fact, the report details how certain sectors saw higher instances of such caste-based discrimination, especially education and the workplace.

However, this position has been opposed by right-wing groups like the Hindu Council UK, which seeks to represent the interests of British Hindus in policymaking. “There is no caste-discrimination amongst us Indians – there might be some taunting [of people who belong to the lower castes] but nothing else,” said Anil Bhanot, its director.

In fact, these groups have called the government’s move an ‘interference’ and have now launched an incendiary attack on the campaign to ban discrimination. Their wrath is visible even in their criticism – these organisations are on record calling the campaign for a ban a ‘Christian conspiracy’, one meant to bring disrepute to India.

May’s apparent hesitation may have something to do with the post-Brexit scenario, according to a member of a pro-caste legislation group, who did not want to be identified. “It realises that India will be a crucial trade partner after Britain’s exit from the European Union trade market and it doesn’t want to upset these Hindu organisations which, it knows, yield enormous clout with the Modi regime.” Amrit Wilson, from the South Asia Solidarity Group, a human rights group, admits that the Hindu Right was consolidating steadily in the UK. “The Hindu Right has been getting more and more entrenched in this country, even though there is also huge opposition to them here.”

Hindu organisations realise this and are not pulling any punches. Bhanot, from the Hindu Council, hints that the Modi regime won’t take too kindly to the anti-caste legislation. “The Indian High Commission has communicated to us its unhappiness at such a move and so has most of the Indian community because we believe this is an attempt to embarrass India.”

Recently, in a sign of their proximity to the Modi regime, the right-wing National Council of Hindu Temples, UK, got senior BJP leader Subramanian Swamy to release its report on why it opposes the caste-based legislation. In its report, it called the campaign for a ban on caste discrimination a ‘hate crime against Hindus.’

The rising influence of these groups is propelled by multiple factors – financial, political and electoral. These groups enjoy financial clout and patronage by the wealthy business owners among the Hindu community. A 2017 report by Grant Thornton India pointed to how there were over 800 Indian-owned businesses with a turnover of over £5 million. Their combined revenues touched over £47 million and they employed over 110,000 people.

Electorally, the 800,000 strong British Hindu community is a significant player and has traditionally favoured Labour, a pattern which now seems to be changing. Even during the recent elections, these organisations issued covert appeals to the community, asking them to keep in mind these caste consultations while voting. Wilson said that many areas also saw these groups issuing ultimatums to candidates, asking them to vouch for their opposition to the caste legislation in lieu of support from the Indian community.

In its appeal to the British Hindu community, the National Council of Hindu Temples stopped short of openly backing May but asked the community to decide between May, “who performed Abhishek with Britain’s Hindus” or Corbyn, who “snubbed Modiji’s parliamentary address and is determined to foist caste labels upon British Hindus.” The message was clear.

In addition, many believe that in a Brexit-scarred Britain, it has become critical that the UK government keep the community, with its entrepreneurial spirit and its influence with the Narendra Modi regime, in good spirits. “The rise of the Hindu Right is being entertained by this government, especially because of where this country finds itself – entering into an uncertain phase due to the impact that Brexit is likely to have,” said a rights campaigner who tracks government policymaking closely.

A cocktail of such acerbic criticism of the legislation, its proximity to the Indian government and its invoking of India’s self-respect and pride is making the May government dither on its own commitment to ban caste-based discrimination. In its consultation paper, the May government has asked whether such a law is even required to begin with. The paper asks, if, instead of creating a new legislation on caste, it should just leave to the courts to develop laws, as and when instances of caste-based discrimination reach the courts.

Such ambivalence and a refusal to bell the cat that caste discrimination in the UK has come to be has earned the May government severe flak from various quarters, including British politicians.

Graham Allen, former member of parliament, who stepped down after a 30-year-long run as an MP with the Labour Pparty, recently wrote an open letter to the equalities minister, calling the consultation the ‘most misleading and biased’ consultation he had seen in his career, saying that there was a clear intention to delay the legislation, “probably forever.”

Varma, from the Dalit Solidarity Network, agrees. “Almost everyone I have spoken to has found the nature and terminology of the consultation quite shocking with a clear bias to developing case law.”

According to Keith Porteous Wood, the executive director of the National Secular Society, the government’s reluctance is abundantly clear. “The government have never sought to meet victims of caste discrimination. They seem more intent on listening to and giving weight to those opposed to the legislation, which in some cases could be perilously similar to giving weight to the views of misogynists opposing sex equality discrimination.”

Little wonder then that rights activists are getting increasingly nervous about their hopes to get a law to tackle the menace of caste discrimination.

For now, the UK government has extended the deadline for these consultations to end from July 18 to September 18. However, with both camps vociferous about its stance on the issue, the fault lines in the Indian diaspora are only going to grow deeper.