How Caste Discrimination Impacts Child Development and Stunting in India

The child height gaps between caste groups is so wide that variation in the practice of untouchability does not affect the height of upper-caste children, but higher spread of untouchability is linked to lower heights of Dalit children. 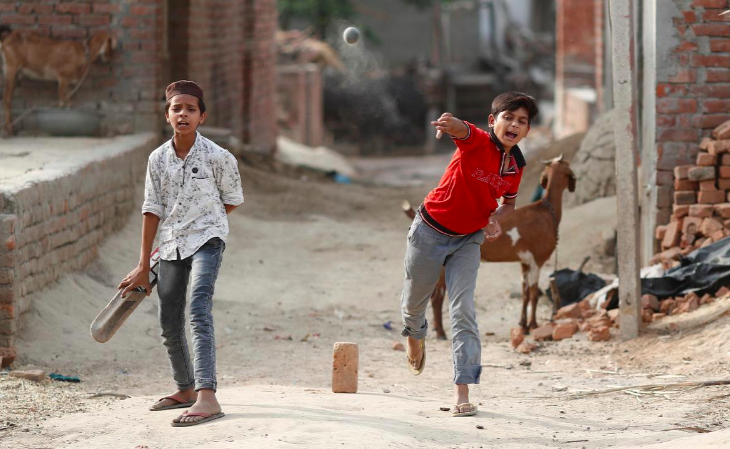 Note: This article is based on a data narrative written for the Centre for Economic Data and Analysis (CEDA). The original piece is modified to address some questions raised by readers after the CEDA piece was published.

India is home to nearly one-third of all stunted children in the world, i.e., children under five years whose height relative to their age is below the acceptable range of global variation. Stunting is defined as “impaired growth and development that children experience from poor nutrition, repeated infection and inadequate psychosocial stimulation”.

Why does this matter? Because early childhood indicators of poor health persist into teenage and often adulthood. Stunting is associated with adverse consequences in later life for morbidity and mortality, non-communicable diseases, learning capacity and productivity.

With one in four children worldwide classified as stunted, it is seen as a global health challenge.

This raises three key questions of immediate interest. One, what is the likelihood that a child stunted at a young age, say age one or five, can grow out of stunting by adolescence? In other words, to what extent is stunting persistent? Two, while stunting is an objective indicator of poor health, what are its other consequences? In particular, what are the implications for human capital and subjective well-being? Three, what are the set of factors associated with stunting? Is the likelihood of stunting simply a result of wealth and income or can other factors be identified, which are more amenable to policy interventions?

We focus on the third question in this piece. But before we turn to that, we need to place the stunting issue in an international context.

Child height is typically negatively correlated with poverty, as stunting is one of the manifestations of chronic malnutrition. Therefore, the fact that Indian children are shorter than their counterparts in Sub-Saharan Africa is counter-intuitive, as India is a richer country. This puzzle, called the “Indian Enigma”, has led to serious enquiry in the form of significant academic papers that have tried to solve this puzzle (Deaton, 2007).

The predominant explanations for this phenomenon are birth order and son preference (Jayachandran and Pande, 2017): first-born children are not shorter but the height gradient kicks in from the second child onwards, especially if the child is a girl; the high prevalence of open defecation, i.e. the disease environment (Spears, 2018); and genetic differences (Panagariya, 2013). Note that the evidence presented by Jayachandran and Pande as well as by Dean Spears raises a serious question mark against genetic explanation.

Our first look at the child height data revealed a picture that, we were surprised to find, had been overlooked in the literature (See Figure 1). 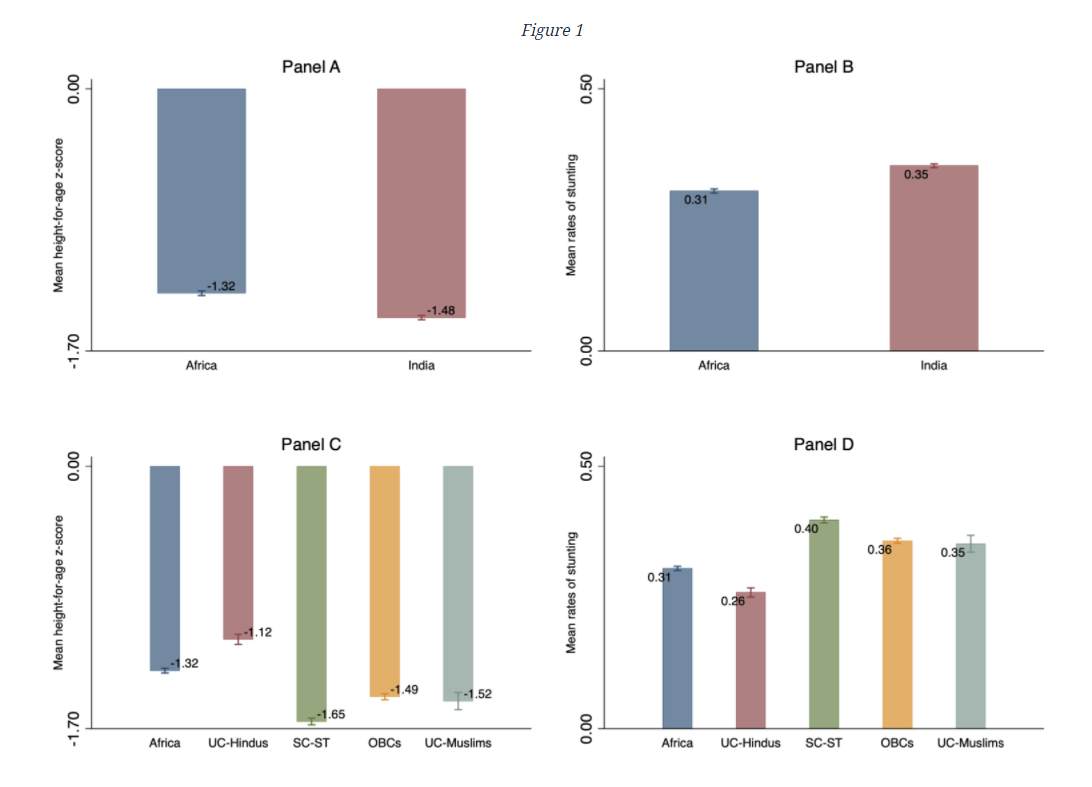 Figure 1 includes data from 30 countries in sub-Saharan Africa, which have a combined under-five population of 132 million and India with under-five population of 121 million. These data are from the latest round of the Demographic and Health Survey (DHS); with data for India from 2015-16 and for sub-Saharan Africa from the latest round later than 2010.

Panel A of Figure 1 plots the average height-for-age Z score *(HFA Z-score). Indian children have an HFA Z-score of -1.48, which is an additional 0.16 standard deviation units less than the sub-Saharan Africa average of -1.32. The rate of stunting is plotted more directly in Panel B: the proportion of children who are more than 2 standard deviations below the world reference median. This panel shows that childhood stunting is 13% higher in India than in sub-Saharan Africa (36 versus 31%). This part of the picture is well known and widely analysed by the literature referred to earlier.

* This is the number of standard deviations of the actual height of a child from the median height of the children of his/her age as determined from the World Health Organization child growth standards (WHO Multicentre Growth Reference Study Group, 2006).

The missing link: the role of social identity

The India-sub-Saharan Africa comparison, however, elides over the crucial inequalities that exist within Indian society. In Panel C and D of Figure 1, we plot the average HFA Z-score and rates of stunting for sub-Saharan Africa and the four major social groups in India: the upper-caste Hindus (UC-Hindus), Scheduled Castes and Tribes (SC-ST), Other Backward Classes (OBCs) and upper-caste Muslims (UC-Muslims, i.e. Muslims that don’t identify themselves as SC or OBC). The four-way classification accounts for the two key cleavages in Indian society: caste and religion.

The patterns shown in Figure 1 indicate that the question “why are Indian children shorter than African children” needs to be rephrased to “why are the gaps in child height between social groups within India so high?”

We address this in our latest paper. In this data narrative, we present some of the salient features of childhood stunting in India.

Variation in stunting across districts and social groups

When we examine the sub-national variation in incidence of stunting, we find both regional and social group variations. We present estimates from the National Family and Health Survey for 2015-16 (NFHS-4).

Table 1 shows the number and share of districts by social group by the incidence of stunting. These are also shown in Figure 2, which plots colour-coded heat maps showing the spatial distribution of the average proportion by district and social group, where the thin black lines depict the district boundaries and the thick black lines the state boundaries and the prevalence of stunting is increasing in the intensity of the colour. 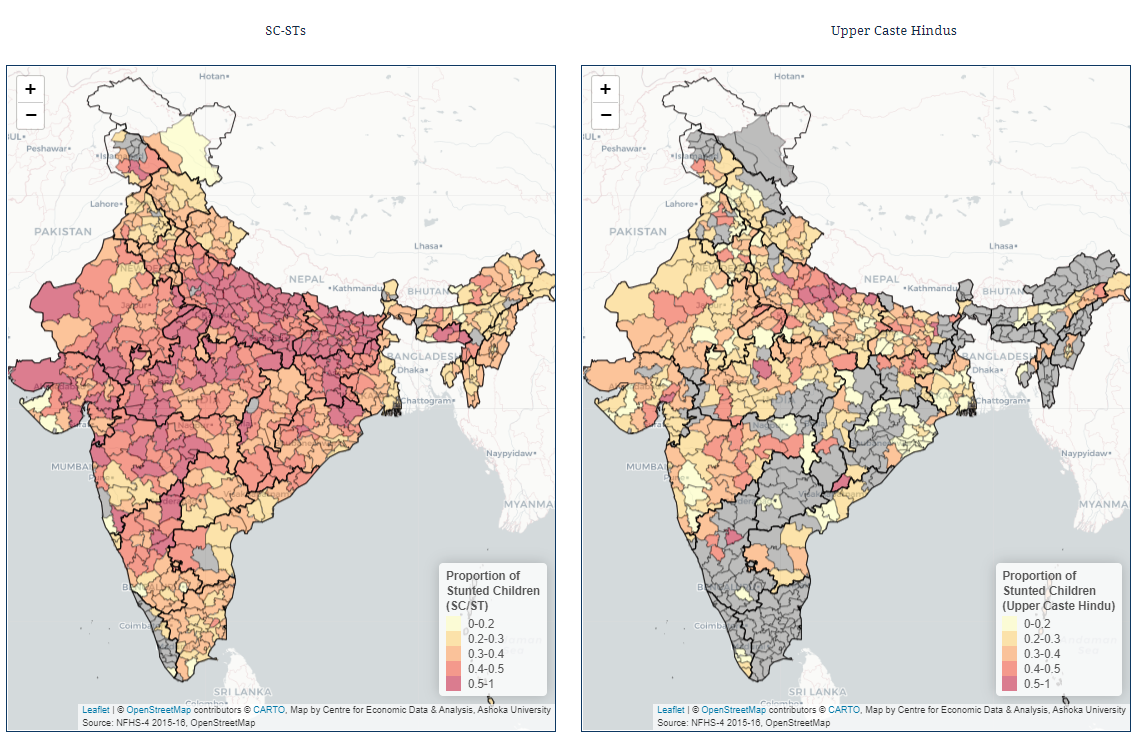 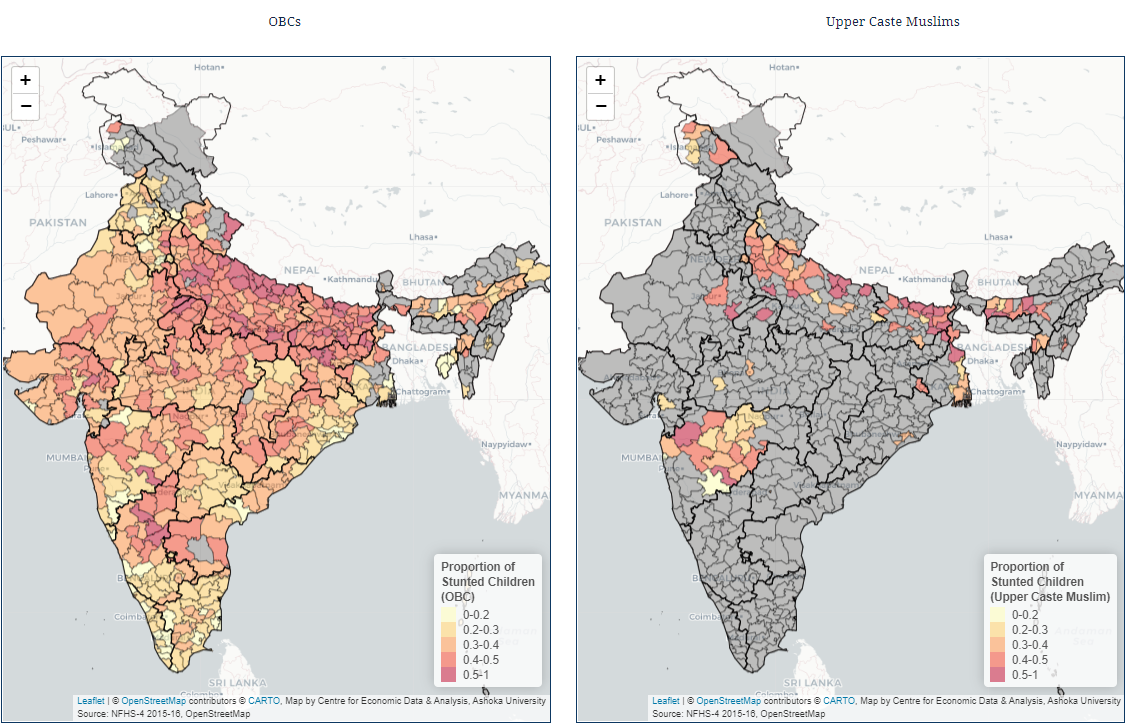 In terms of regional patterns, the Figure 2 shows a very clear pattern in the areas with the highest prevalence for SC-ST concentrated in the states of Bihar, Chhattisgarh, Jharkhand, Madhya Pradesh, Rajasthan and Uttar Pradesh, as can be seen by the northern and central plains being largely red in colour. More specifically, for the SC-ST children in the BIMARU region, in 195 or 84% of the districts, the prevalence of stunting is greater than 40%; and in 105 or 44.49% of the districts more than half the children are stunted.

The BIMARU region stands in stark contrast to the southern and northern regions; not only is the prevalence of such extreme levels of stunting lower across all caste groups but also the extent of differences across caste groups are much smaller. For the upper castes, in the BIMARU region, in only 38 (16) percent of the districts, the prevalence of stunting is greater than 40 (50) percent.

For the OBCs and upper-caste Muslims, in the BIMARU region, the prevalence of stunting in 61% and 71% of the districts, respectively, is greater than 40%.

What accounts for the gaps between social groups and regions?

Many readers asked if what we were characterising as caste gaps were simply differences in socio-economic attributes. If this were true, differences in circumstances should explain the child height gaps between caste groups.

In our research, we start by examining these factors first.

We identify five important categories of factors that affect child height, namely: (i) lack of access to sanitation, captured by two variables: no household access to toilet facility and household members defecating in a bush/field; and the exposure of a household to open defecation at the primary sampling unit level; (ii) the mother’s human capital, measured by two indicators: years of schooling and ability to read, measured by an actual test; (iii) mother’s anthropometric status as captured by the HFA Z-score, the weight-for-height (WFH)-Z score and age; (iv) asset differences as captured by the wealth index factor score; and (v) intra-household allocation and fertility decisions, proxied by birth order and sibling size.

Clearly there are large and significant differences in the environment that upper-caste and Dalit children grow up, with the circumstances being much more adverse for Dalit and Adivasi (SC-ST) children. Do these differences in socio-economic characteristics explain the child height gap between social groups?

Using Entropy Balancing, a methodology that enables us to compare like-with-like, we examine differences in stunting in “matched” samples of upper caste and Dalit children, i.e. children whose socio-economic characteristics are matched along major dimensions. We find that in our matched sample in BIMARU states, SC-ST and OBC children are likely to be shorter than upper-caste children. This suggests that the greater stunting among children of low-ranked castes is not only because of their relatively more disadvantaged circumstances. 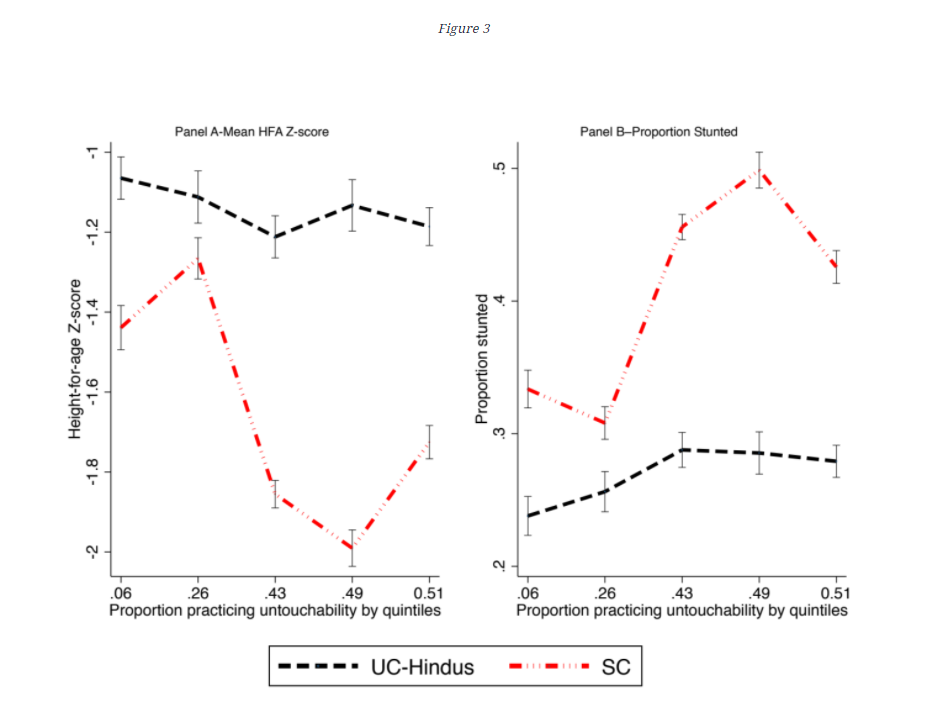 Figure 3 shows that Dalit children’s HFA Z-score sharply decreases in areas where the practice of untouchability is more prevalent. In contrast, there is a much weaker association between height/chronic malnutrition levels and the proportion of households reporting practicing untouchability, for upper-caste children.

We also explore the impact of the practice of untouchability on the whole pathway of child development. Our results show that the areas where households are more likely to engage in the practice of untouchability are the same areas as those where SC mothers and children are less likely to be able to access or use a whole range of antenatal and postnatal health inputs.

Our results on caste-as-a-missing-link show that the caste gaps in child height are not entirely a reflection of class or socioeconomic status (SES) differences. While caste groups differ on an extensive set of covariates that are determinants of child height, we show that sizable gaps remain even when comparing samples that are balanced on the same set of covariates.

The evidence shows that the illegal, but widespread, practice of untouchability is positively associated with height gaps between upper and lower-caste (Dalit) children. In particular, variation in the practice of untouchability does not affect the height of upper-caste children, but higher spread of untouchability-related practices is associated with lower heights of Dalit children. The results, moreover, suggest a role for discriminatory practices in affecting service delivery to pregnant and nursing mothers from stigmatised groups and consequently the health outcomes of lower-caste children.

Ashwini Deshpande is professor of Economics at Ashoka University. Rajesh Ramachandran is a post-doctoral researcher  at University of Heidelberg.