The brutal attack on pilgrims last year – the bicentennial of an iconic battle in Dalit history – did not stop lakhs of Ambedkarites from returning to commemorate the 201st anniversary. 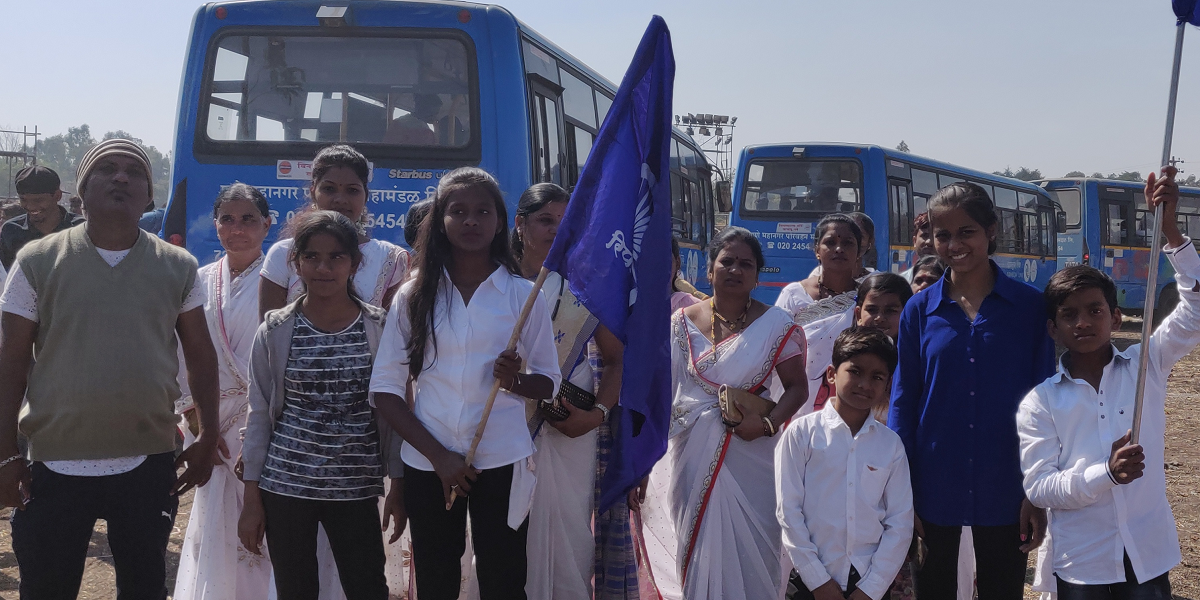 Many people traveled to Bhima Koregaon for the first time this year. Credit: Sukanya Shantha

Bhima Koregaon, Pune: Lata Raut and 23 other women, all in their 50s, travelled from Ner Pinglai village in Amravati to Bhima Koregaon, stepping out of their villages for the first time. “But the visit had to be made,” says 54-year-old Raut, a member of Ramabai Mahila Ghath, an all-women self-help group named after Dr B.R. Ambedkar’s wife Ramabai.

“Most of us have not travelled outside our district, at least without male counterparts. But this is a watershed moment for our Dalit community and we ensured our footfall gets registered too,” Raut explained. Temperatures dropped as low as 5 degree C and the women huddled together in the open space adjacent to the Vijay Stambh (victory pillar) compound.

On January 1, 2018, lakhs of Ambedkarites participated in the 200th commemorative event at the memorial pillar of Bhima Koregaon, 30 km north-east of Pune. Before they could reach the memorial spot, Hindutva goons – allegedly belonging to Manohar alias Sambhaji Bhide and Milind Ekbote’s organisation – had launched an attack on the visitors. Their vehicles were set on fire and stones were pelted at them. 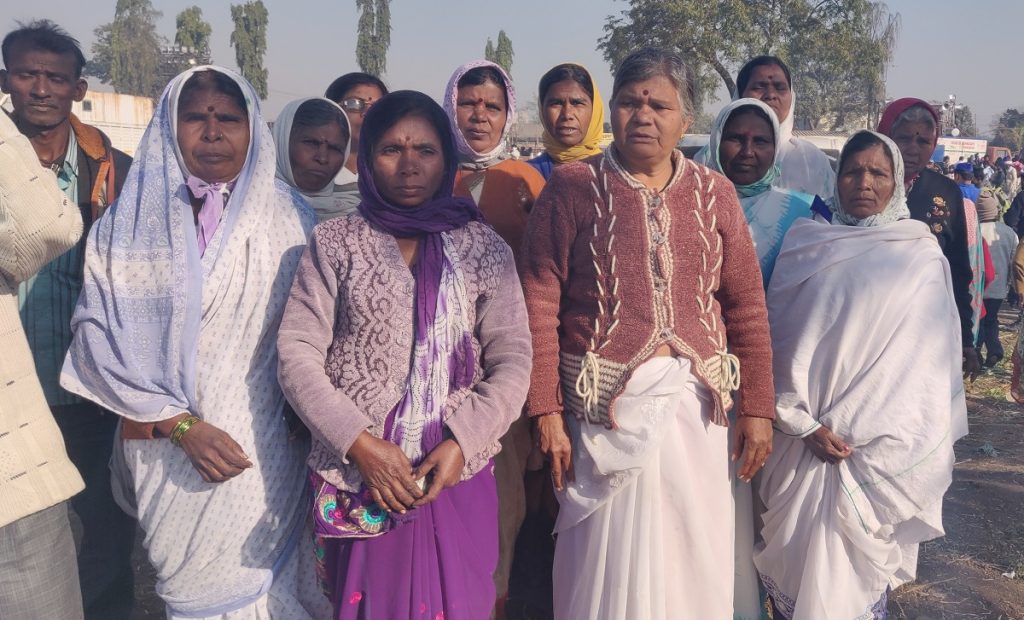 The attack had a lasting impact on the Bahujan community, and the state had indicated that lesser people would turn up to the stambh, this year.

But this year, as lakhs of people began to pour into Bhima Koregaon on January 1, the anniversary of a historic battle won by the British army – largely comprised of soldiers from the Dalit community – against the Peshwa regime ruled by the Brahmin king Baji Rao II in 1818, one thing became clear. The community is here to assert itself, more strongly than ever. Among the estimated 20 lakh visitors, several were visiting the stambh for the first time.

The Third Anglo-Maratha war, of which the Battle of Bhima Koregaon was a part, helped the British establish its reign in large parts of India, especially in the western region. For the Dalit community, however, this history is crucial to their struggle against untouchability.

This year, the security was beefed up for the first time. The area was cordoned off, metal detectors were set up on both sides of the road leading to the village. The heightened security also meant people had to walk eight kilometeres from both sides of the Pune-Ahmednagar highway to reach the stambh.

Vishwas Nangre-Patil, the inspector general of the Kolhapur Range, claimed the arrangements were made “to ensure no untoward incident occurred this year”.

Peaceful it was, but the anger simmered through slogans and Bhim geet (songs sung in praise of Ambedkar) heard through the day. Slogans also criticised the Narendra Modi government and demanded the arrests of Hindutva leaders Bhide and Ekbote. “Brahmanwaad ho barbaad, Modi sarkar ko maar giraao (down with Brahmanisn, defeat Modi- government),” highlighted the sentiments of those gathered at the memorial.

Last year, Bahujan pilgrims – mainly comprising of Dalits from across the country – were attacked. The police initially booked Bhide and Ekbote, along with hundreds of their followers. But later, the state went easy on the duo and introduced a new “Maoist angle”, arresting ten human rights activists and lawyers as the conspirators behind the violence.

After the violence, Bharipa Bahujan Mahasangh president Prakash Ambedkar (B.R. Ambedkar’s great- grandson) called for a state-wide bandh. Thousands of Bahujan youth were arrested, including minors. These cases are yet to be withdrawn by the state, even after several assurances.

A 27-year-old computer engineer from central Mumbai who was arrested last January under charges of rioting and unlawful assembly travelled once again to the Vijay Stambh. This time, he was accompanied by his wife and two-year-old daughter. He said the case cost him his job and steady income. But he is proud of making an important contribution to the anti-caste discourse.

“I was sacked from my job at an MNC soon after I was arrested,” he told The Wire. Currently, he is working as a consultant, earning half of what he made then. “I was standing in solidarity with others from my community, when it was required the most. It is a fight for dignity, which the savarnas will never understand. I paid the price, but I have no regrets,” he explains.

But in some cases, the police have not taken any action. For the Bhalerao’s of Bhima Koregoan, the case caused a lot of stress last year. They claim that since then, the police have only been supportive. Three brothers from the Bhalerao family were booked for “rioting”.

“Several Maratha men and other men belonging to the OBC communities were arrested for rioting. A counter case was filed on the men from Dalit community too. But the police have not pursued the case. They only expect us to maintain peace,” said Bhausaheb Bhalerao, one of the brothers.

Young men pose for a picture with the Victory Pillar in the backdrop.

In times of adversity, it is always the ordinary ones who fight back and emerge as leaders. At Vadhu Budruk, around 3.5 kilometres from Bhima Koregaon, the women of Gaikwad family fought back hundreds of Maratha men who had gathered to desecrate the tomb of Baba Govind Gopal Gaikwad. 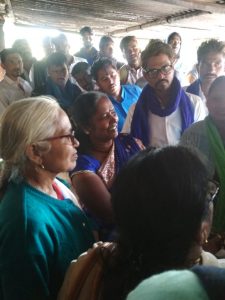 The story goes, in the 17th century, fearing a backlash from Mughal emperor Aurangzeb, none came forward to perform the final rites of King Sambhaji. Baba Govind Gopal Gaikwad had shown courage. His tomb is next to Sambhaji’s in Budruk.

Sushma Ohol and her mother Anjana Gaikwad were the two women who, on December 29, 2017, stopped the rioting men – all Marathas – from damaging the tomb. This year, as people gathered to pay their respects at the tomb, they also visited the Gaikwads to touch the women’s feet and click a selfie.

“Since that incident, the women in the family have been getting more limelight than the men,” says Anjana, chuckling, as she readies to take more pictures with the visitors. Ohol’s case is the first, and the only one, in which police have filed a chargesheet against Ekbote.

In Maharashtra, on Ambedkar’s birth (April 14) and death anniversary (December 6), lakhs of people gather at Deekshabhoomi in Nagpur and Chaityabhoomi in Mumbai respectively. The Bhima Koregaon gathering, until last year, was a relatively low-key event. Only a few hundred visited the victory pillar.

Also Read: Less Than 3% of All Faculty Members at IITs Are SC/ST

These congregations, over the years, have gone beyond being limited to the Dalit identity. Many from the OBC, Nomadic Tribes, backward caste Muslims and other oppressed identities have also begun participating in the celebration.

This year, under the banner of ‘Regional Christian Society’, a newly-floated organisation of Dalit Christians in the state also visited Bhima Koregaon. Holding a placard with the message “Prem, Daya, Shaanti (love, mercy and peace)”, the small group walked along with other visitors.

Members of the newly- floated ‘Regional Christian Society’ visited the victory pillar on January 1. Most members of the organization belong to the Dalit community and identify themselves as ‘Bahujan Christians’.

“We are all Bahujans who have converted from several erstwhile untouchable castes. Although Christians, we believe in the principles of Ambedkar. We wanted to visit the stambh this year to spread our message of peace and equality,” said the organisation’s founding member and president Prashant Kedari.

Some men carrying saffron “Jai Shivaji” flags were also spotted among the crowd. Along with blue flags, saffron flags were seen too at the event. ‘Bahujan unity’ was the underlying message of the gathering at Bhima Koregaon.

An organised troop of Ambedkarite soldiers dressed in crisp white shirts and khaki pants, men and women belonging to the Samta Sainik Dalit (SSD), an organisation formed by Ambedkar in 1927, aided the police in managing the crowd. Since its inception, SSD volunteers have helped handle and discipline crowds at every Ambedkarite congregation in an almost regimented army-style approach.

“Last year, around 400 volunteers were present. This year, over 2,000 volunteered,” said Anand Bhurje, a retired Major General. Most SSD volunteers are retired army officials. They dedicate their time to organising various community events and volunteering across the country. 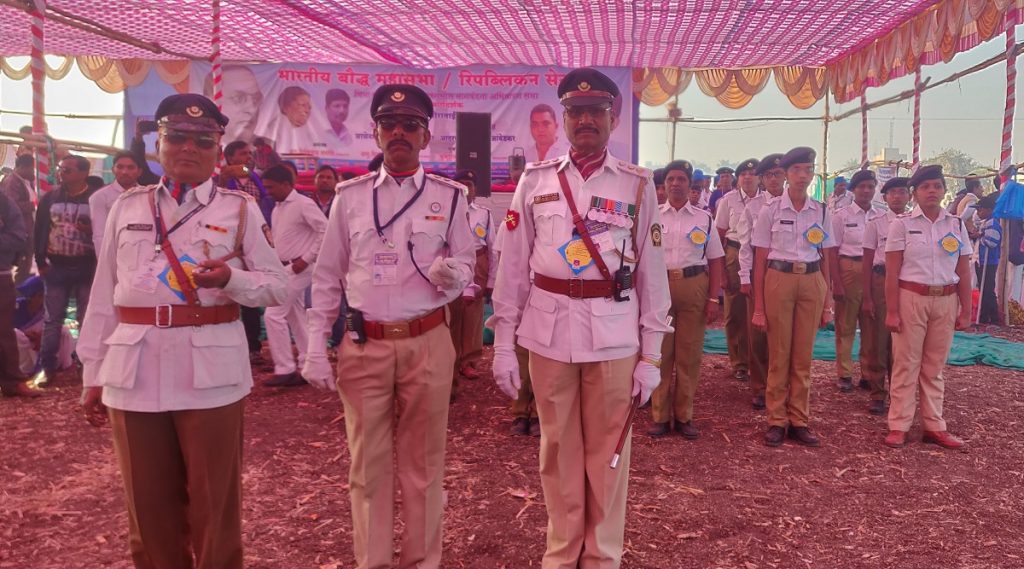 Volunteers of Samta Sainik Dal, an organization floated by B. R. Ambedkar, prepare for a parade at the Victory pillar.

Among other visitors were retired and pre-matured pensioners from the Mahar regiment – the original regiment which helped the British win the 1818 battle.  They turned up in large numbers.

“It is a great honour for us to be a part of such glorious history. This is our Shouryabhoomi (land of valour). We have been visiting the stambh for over a decade now,” said Dhiraj Munjewar, a Nagpur-resident who retired from the army in 2009.

Retired and pre-mature pensioners of the Mahar regiment, a regiment which was part of the battle of Bhima Koregaon, 1818, pay a visit to the Vijay Stambh.

Several prominent political leaders too made a beeline to the event. At 7 am, Prakash Ambedkar paid his respects. Later in the day, Bhim Army leader Chandrashekar Azad and RPI leader Ramdas Athawale also visited the memorial.