Bhima Koregaon and the Dalits' Never-Ending Search for a Nation

Over the past few days, Maharashtra has observed the pent-up rage of a community that is still struggling to establish its legitimate claim in India’s history, while fighting for their rights and dignity. The 200th anniversary of the Bhima Koregaon rally in Pune, attended by lakhs of Dalits on January 1, was attacked by several right wing outfits that led to the death of a youth and injured many others. Upper caste men and Hindutva outfits like the Akhil Bhartiya Brahmin Mahasabha, the Hindu Ekta Aghadi, Shiv Pratishthan and the Rashtriya Ekatmata Rashtra Abhiyan had been opposing this event as being “anti-national” and, as was expected, mobilised a planned attack on the same.

As a student of history, it is a crucial exercise to interpret the past to unravel contradictions inherent in it, and to understand the various symbolisms involved in the act of remembering the past. This is not just to get a better sense of the past, but also to draw the right lessons for the present and for the future. If, as a historian, one is biased towards the dominant common sense, one may end up interpreting the act of commemorating Bhima Koregaon by the Dalits as a blatant celebration of a foreign (British) victory. This notion would presuppose that the Dalits fighting on the side of the British were “anti-nationals” (just like those commemorating them), while the vanquished – the Peshwa – may be a presumed as a “national” hero. But anyone who is aware of history would know that in 1818, when the British fought the Peshwas in Koregaon in the banks of the Bhima river, there was no Indian nation that existed. Nor was there any pan-Indian notion of nationalism. There were only a plethora of principalities that were in a state of war with each other from time to time. The East India Company, for its own imperial trading interests, allied with some, fought with others, negotiated with some, and vanquished others.

What did exist, however, was entrenched Brahmanism or caste that segregated people by birth, discriminated against them, denied them resources and dignity. As per the casteist diktats of the Brahmin Peshwas, the Mahars, who were considered untouchables, were made to tie brooms at their waists to sweep the dust of their footprints, and pots at their necks to collect their own spit. The Dalits recount that the Peshwa Baji Rao II in fact did not even allow the Mahars to fight in his army. So when the 900-strong Mahar soldiers in the Company’s army defeated the 20,000 strong Peshwa forces, it was meant to enter into a tale of legends.

The victory memorial erected at Bhima Koregaon was just one among various such war memorials that the British had constructed across the subcontinent to immortalise or symbolise their own victories. Even the India Gate in Delhi, around which the Republic Day parade is held every year, is one amongst them. But in history, symbols are often given different meanings by people, depending on how they relate to it from their own subject position. This particular memorial at Koregaon, for instance, with the name of the Mahar martyrs etched on it (along with the Marathas, Muslims and Christian soldiers who fought alongside), assumed a different significance for the Dalits as they derived from it a sense of pride and self-respect that was denied to them by the Peshwas for centuries. About a 100 years later, this meaning was reinforced by none other than B.R. Ambedkar who, on January 1, 1927, visited the monument with Dalit veterans of the British army. 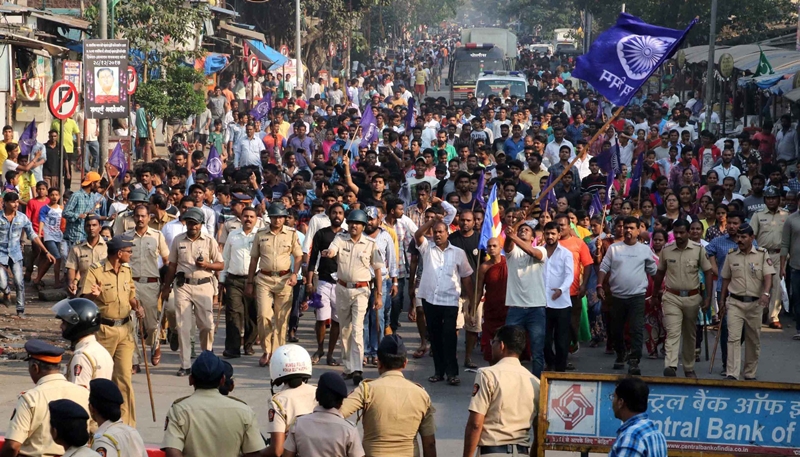 The British never attempted to vanquish Brahmanism. They rather ruled in collaboration and collusion with the Brahmanical ruling elite. And what disturbed Ambedkar the most was the fact that the dominant narrative of nationalism or the nascent idea of a nation that was emerging by the early decades of the 20th century was no different than the Peshwayi in terms of its disdain for – and discrimination of – the Dalits. The Congress, headed by Gandhi-Nehru-Patel, epitomised this upper caste expression of nationalism in which Dalits had no place, no voice, no rights and no dignity. The Hindu Mahasabha openly promoted the Manusmriti and glorified a revival of the chaturvarna legacy. When Ambedkar raised his voice on behalf of the Dalits, he was, in fact, the first to have been branded an anti-national, a traitor.

However, it never detracted him from his firm belief that no amount of political/legal freedom would mean more than a paper’s worth unless there were genuine efforts towards social transformation, towards annihilation of caste to start with. Till then the Dalits, he knew, would never have a nation.

So, Ambedkar’s visit to Bhima Koregaon in 1927 was an excercise of re-interpreting or reclaiming the war memorial for building his alternative vision of a nation wherein the Dalits would have a voice on equal footing. That is the real significance of Bhima Koregaon.

But 200 years since, and even after 75 years of Independence, Dalits still don’t have a homeland or a nation. This is the message that the Hindutva outfits wanted to convey under the patronage of the ruling Rashtriya Swayamsevak Sangh/BJP by brutally attacking the 200th anniversary rally of Bhima Koregaon in broad daylight. In protest, Dalit organisations called for a bandh. What Maharashtra has observed over the last two days is the pent-up rage of a community that is still struggling for its legitimate claim over the nation’s history, its resources and their own rights and dignity.

Two hundred years from now, if a student of history would attempt write about today’s happenings, and would be tempted to use the contemporary newspapers as sources for his/her study, what she/he would find is an overwhelming tale of “rampage”, “hooliganism”, “inconvenience”, “disruption of traffic”, “cancellation of film shootings” and “the plight of Mumbaikars” as a “city was brought to a halt” by “unruly elements”. This is how caste-bias reflects in the reporting of majority of the mainstream media today.

But the moment the anger of the Dalits against centuries of denial and humiliation express itself in the streets, all hell breaks loose and it is dubbed merely as “inconvenience” or “hooliganism”. The entire might of the state is brought upon them as has happened in the past in Ramabai colony or in the aftermath of the Khairlanji massacre when Dalits burst in anger against such atrocities.

Interestingly, the future historian will also find that instead of the right-wing culprits, it is the likes of Umar Khalid or Jignesh Mevani who stood in solidarity with the Dalits. Unless the historian has a knack for truth, he/she can easily be deceived by such casteist and saffron cacophony.

If we are to make the task of the future historian easier, if we are to build a better future for the oppressed millions of this country, for the Dalits and the Muslims, then it is imperative that we strengthen the struggle for annihilation of caste and the fight against Hindutva fascism. And it is towards that end that the Dalits of Maharashtra are marching today.

Anirban Bhattacharya has a Ph.d in History and is currently working as a senior researcher at the Centre for Equity Studiers, New Delhi. He is also a member of the Bhagat Singh Ambedkar Students Organisation.