For How Much Longer Can We Ignore Caste and Still Call Ourselves Progressive?

In India, ‘desi rap’ music is now recognised as an expression for the people who have faced various kinds of oppression.

The song 'Roots' has landed in controversy because of the line 'Untouchable with the Brahmin flow'. Credit: YouTube screengrab

How much can one overlook ignorance of history? For a while maybe, but when it becomes a repeated excuse to remain insensitive to society, it must be addressed. In India’s case, especially when it comes to the caste system, ignorance and denial is not just of the past, but also of the present. Many do not agree with the fact that the caste system and the atrocities related to it are still prevalent today; most chose to turn a blind eye to the fact that it does. Cultural memory is characterised by its distance from the everyday, but caste is a phenomenon that can be observed in the quotidian and thus is not a memory, but a cultural reality, and its denial turns into a choice.

Last week, Divine, a rapper raised in Mumbai, famous for his hip-hop outfit Gully Gang, released a new track, ‘Roots‘, featuring fellow rapper Raja Kumari. Since its release, the song has gained considerable popularity on social media. Divine hails from Mumbai and rose to fame for making music that deals with social issues, such as the struggle of growing up in a slum.

Raja Kumari, on the other hand, grew up in California, worlds away from India and its issues, into a privilege unlike her counterpart. She has previously been associated with the streets for her release ‘City Slums’, because unlike the other Indian-American musicians, it seemed like she was making an effort to address the issues. It was only when a journalist associated with a national daily present at the pre-release ‘listening party’ at Sony’s headquarters posted the lyrics, that Raja Kumari’s privilege came under scrutiny. In the song, she says,

“Move like the queen of Mumbai – Bye
You don’t want no drama Aunty ji come try
Untouchable with the Brahmin flow
From the motherland, what you reap you show”.

While it is hard to decipher what exactly she’s aiming for with the line ‘Untouchable with the Brahmin flow’, it seems to imply that she is ‘untouchable’ because of being a Brahmin. The word ‘untouchable’ has had a troubled past. It’s the inclusion of these two words in the same sentence, in this particular context, that raises uncomfortable questions. For the sake of wordplay, Raja Kumari touched upon a very sensitive issue. She has now (perhaps inadvertently) stirred a hornet’s nest. The song conveys her Brahmin-savarna pride, but also reveals her tone deafness and disregard for a history of oppression. 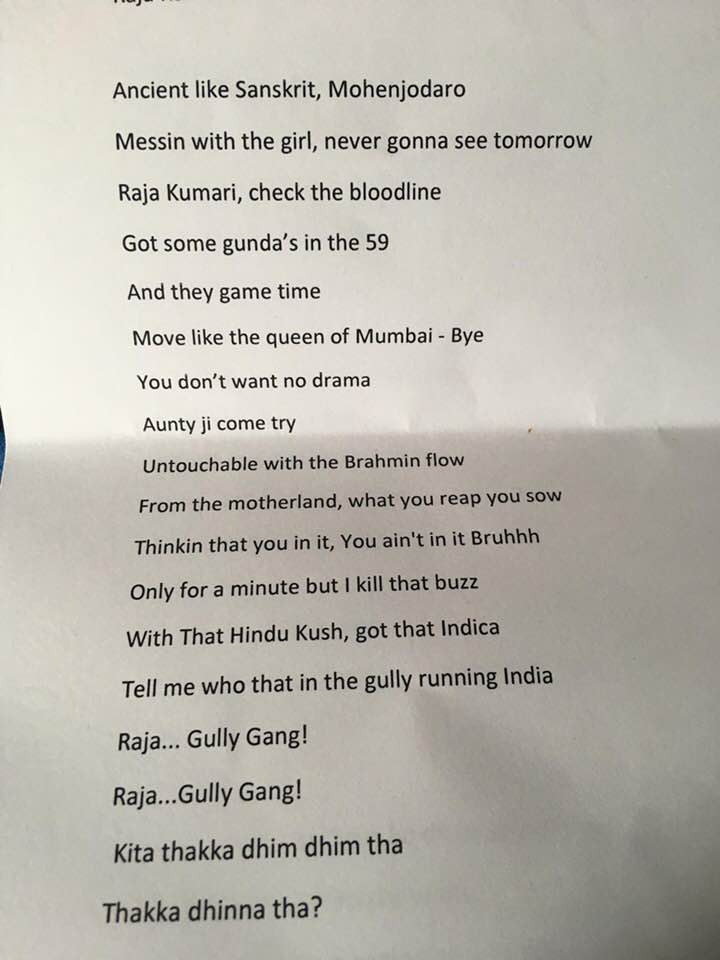 An image that shows the lyrics of the song. Credit: Author provided

In an interview with Firstpost, Raja Kumari has said,

I’ve noticed, walking around and talking to people in India, I’m a lot more Indian than they are. I studied Ancient Religious studies, I took comparative religious studies in college, I have a degree in Ancient Indian history. I studied Sanskrit, three classical dance styles and did my arangetrams in different styles. I’ve dedicated my life to study Indian culture.

Kumari’s intention might not have been malicious, or aiming to undermine years of struggle, but her choice of words is outright questionable and casteist. What’s worse, when the journalist who was present at the party questioned Shridhar Subramaniam, the managing director of Sony Music India, about the lyrics, he said to her that she didn’t “get the wordplay and wanted to look for politics in hip-hop, when it is supposed to be fun and entertaining.” After the party, the journalist tweeted:

(1/2) Had the most infuriating experience at Sony Music this afternoon. If you’re going to invite a journalist to a listening party for an unreleased track, and you want their honest opinion, don’t talk over them when they start to tell you what isn’t working for them.

We have not normalised the Holocaust. Even if one’s beliefs are deep-rooted in anti-Semitism, one thinks twice before bringing it up in a casual joke or a casual remark. So why have we, as a society, normalised the caste system? Its atrocities have continued for thousands of years. Jokes – deeply offensive and replete with casteist slurs like ‘choora’ and ‘chamar’ – are slunk around in day-to-day conversations, in observations, on social media. Why is there no acknowledgement or fear of saying what is socially and even legally unacceptable? It might go unnoticed under the shroud of anonymity that the internet provides, but when one has received elite education and has access to the internet, ignorance or denial of the caste system and the effect of these casteist slurs becomes unacceptable, especially when one is the managing director of one of the biggest music companies in India, or a rapper who raps for ‘the people, for the Babylon’.

Subramaniam is perhaps unaware of the fact that rap originated as a genre that was conscious of class and political struggles. From Ice Cube to Childish Gambino, rap has been the platform to address the issues of racism and discrimination. With artists like Kendrick Lamar, who recently won the Pulitzer Prize for music for ‘DAMN’ and has advocated equality and liberation for black people, rap has been at the forefront of dissent. Akala has been doing the same with his music in the UK.

In India, ‘desi rap’ is now recognised as an expression for the people who have faced various kinds of oppression. Artists like Divine and Prabh Deep have been ruling the charts for a while now. Along with the emergence of politically conscious, independent labels, desi rap has come started to become popular.

This isn’t the first casteist incident that has taken place in the music industry in the recent past. Almost a year ago, The Piano Man Jazz Club, a music performance venue in south Delhi came under fire for permitting a band named ‘Bhangijumping’ to perform. When a group of individuals pointed out the casteist slur ‘bhangi’ present in the band’s title, a word which is used to insult and undermine Dalits, the owner of the venue, Arjun Sagar Gupta, issued an ill-worded letter that said, “For those people who chose to call for boycott of our club for this, without talking to us, please don’t visit the club. We don’t want your small mindedness in our home”, and ended it with the line, “Let’s focus on the art, shall we?” The letter infuriated the public and when he felt the heat rising, Gupta issued a second statement accepting his ignorance – that his intention was not to shame or oppress anyone, and that he had never been “in a space of politics and casteism”, so he didn’t know how to react.

Both cases have different premises, but are essentially the same. They come from a place of ignorance. Perhaps the ignorance can be wiped out by an apology, perhaps it can be forgotten because of a self-deprecating letter, and maybe, just maybe, the culprits will become ‘woke’ after the incidents. Raja Kumari might apologise tomorrow and say that there were gaps in her understanding of caste; maybe she will even make an effort to acknowledge caste since she seems so interested in the Indian culture, of which caste is (unfortunately still) an integral part. But this is only a small part of a much bigger picture which involves people like Subramaniam, who don’t want to understand or acknowledge how problematic all of this is. Why else, then, would our fellow citizens google the caste of P.V. Sindhu and Hima Das?

In his acclaimed novel The English Patient, Michael Ondaatje writes about class:

It’s only the rich who can’t afford to be smart. They’re compromised. They got locked years ago into privilege. They have to protect their belongings. No one is meaner than the rich.

This is very similar to the people belonging to upper-castes in Indian society. The savarna mentality too locked itself into privilege a long time ago and for years, the savarnas have fought to protect their privilege, easily resolving the problem by either shutting their eyes, or by declaring war.

As a savarna with privilege, I do not represent the Dalits and do not intend to voice an opinion about something which I haven’t experienced. My only intention with this article is to recognise, as I did, the persistence of the caste system, the atrocities committed against the Dalits, and the history of violence that came with it. Similarly, the purpose of this article was not to pick on Raja Kumari, or the millions like her, but to focus on a larger, significant issue that has been nothing but detrimental for our society.

It is not the Brahmins that have to be destroyed to annihilate the caste system, but the Brahmanical mentality which exists in the minds of everyone – from Brahmins to Dalits. Caste, like religion, is resolute and has persisted for thousands of years. It is hard to get rid of something that has existed for so long and has shaped our modern-day society. But can we really call ourselves modern if we the caste-system still prevails?

James Baldwin writes in his book Nobody Knows My Name, “Any real change implies the breakup of the world as one has always known it, the loss of all that gave one an identity, the end of safety”, and that is exactly what has to be done to expunge the demonic caste system. Till caste superiority is prevalent and significance is attached to one’s surname, caste cannot be eradicated. For the complete annihilation of caste, it is important to first understand caste, to acknowledge caste and to acknowledge the degrees of violence. The acknowledgement in itself is momentous.