Everything that Ambedkar was firmly opposed to is being used to hypocritically subvert his message. 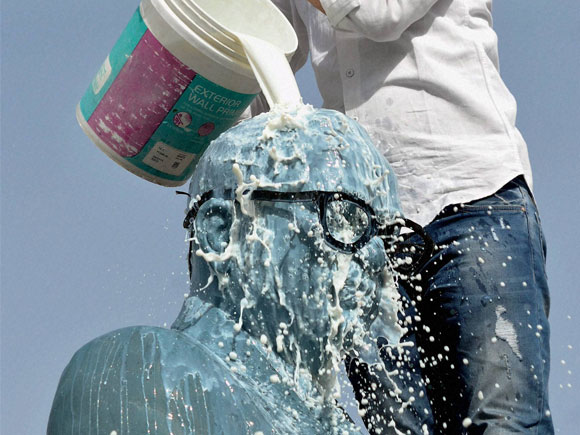 A BJYM member cleans a statue of Bhimrao Ambedkar with milk on the eve of his birth anniversary in Bikaner. Credit: PTI

Note: This article was originally published on April 14, 2017, and is being republished on the occasion of Ambedkar Jayanti.

On April 13 in Jaipur, a ‘bhakti sandhya’ (devotional evening) was organised in the name of Babasaheb Ambedkar. Two Union ministers were guests of honour at this event, which goes against the spirit of what Ambedkar stood for. Ambedkar, the radical rationalist, being subjected to the folly of devotion – can anything be more absurd than this?

Had better sense not prevailed at the last minute, the ‘SC Cell’ of the Congress party, Ambedkar’s lifelong antagonist, would have displayed its foolishness. In Bhilwada, about 126 kilo-litres of milk were going to be used to consecrate a statue of Ambedkar, and this invariably was to come with pandits chanting mantras. The urine and dung of the cow, along with milk and curd, are among the things used to purify the Untouchable Ambedkar in Bhilwada – this is exactly what the Brahmins in Mahad did to ‘purify’ the temple tank after Ambedkar and his 3,000 followers drank water from it in 1927. 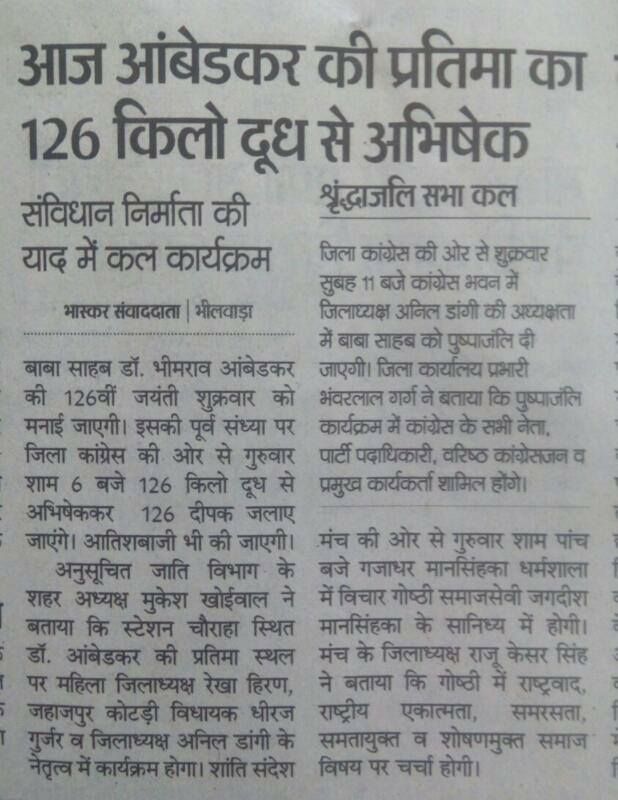 The third instance of such nonsense will happen in Raipur, by taking out a ‘51,000 kalash’ procession in his honour. The very high-caste women for whom Ambedkar gave up his ministerial post over the Hindu Code Bill will be asked to carry these ‘auspicious pots’ on their heads as every household contributes a coconut each to be offered along with its auspicious waters to Ambedkar’s statue. Flowers will be rained from a helicopter upon a man whose people are still not free to touch the pots of MNREGA, aanganwaadi and mid-day meals. A ‘kalash yatra’ in this man’s name, then, is extremely unfortunate and condemnable.

There are reports from another place of a devotional gathering (‘bhajan satsang’) on the eve of Ambedkar’s anniversary. One city will see the offerings of a ‘bhog’ of ladoos to the deity Ambedkar.

Mahakumbhs and community dinners are being organised among the castes that are known to be followers of Ambedkar. They are being invited with cards where the greetings ‘Om Ganeshay Namah’ and ‘Jai Bhim’ are juxtaposed – and these are thought by the so-called followers to be appropriate and acceptable. They participate without a murmur of protest.

You can see various rings on the fingers and amulets on the necks of self-proclaimed Ambedkarites; their wrists are tightly wrapped with ‘sacred’ threads in many colours. Big tilaks appear as the very pride of their foreheads. Croaking ‘Jai Bhim’ and ‘Jai Shri Ram’ together, they seem to be everywhere and are being called Ambedkarites. 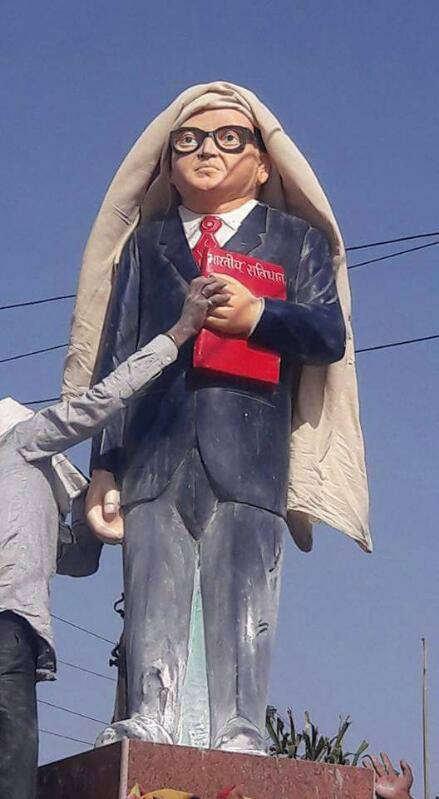 In Rajasthan, Ambedkar’s statues are being ‘donated’ thanks to anti-Dalit Baba Ramdev’s money. These statues are obnoxious upon first sight. Ambedkar has been given the face of a Marwari lala at one place, depicted with his arm hanging downwards at others and has also been constructed with his finger striking the pose evoking ‘sabka maalik ek’ – God is one.

Is this Babasaheb or Sai Baba? Don’t erect a statue if you don’t have the money or the sense to do it right. Moreover, these ugly statues of Babasaheb are being erected overnight on the filthiest of sites just to grab land.

Now that Ambedkar’s idols are being sponsored and erected by his very enemies, the day will soon come when temples will be built for him, pujas with clanging bells and cymbals conducted, and songs sung with utmost devotion. ‘Bhim chalisa’ has been composed already – and do keep intoning it.

A new era of slavery has begun.

We all know that Ambedkar was dead against Gauri, Ganpati, Ram-Krishna, Bramha, Vishnu, Mahesh, destiny as well as concepts of soul and God – his 22 vows at the time of conversion in 1956 make this clear. He was a sharp critic of cults of personalities and hero worship – he, in fact, discouraged his followers in his lifetime from celebrating his birthday. He spoke against the so-called mahatmas, calling out the fact that the untouchables had only been seen as treated as dust by them.

What we are doing today in Ambedkar’s name is most shameful. This will only carry the anti-caste caravan of Ambedkar and other great leaders back by a thousand years. This needs to stop.

I would ask Dalits to not blindly extol and worship Ambedkar’s images, not to marginalise his thoughts by making him a deity. Do not kill Ambedkar.

Vidya Bhsushan Rawat interviews Bhanwar Meghwanshi: ‘Days of Identity in Dalit Politics Are Over, We Need to Focus on Ideology’

If you want to remain a slave, please do. The Indian constitution allows you be a slave willfully. But do not defile Ambedkar.

The path you are walking will spell the end of democracy and the constitution. If discrimination and atrocities, the humiliation of our women and the removal of reservation comes afterwards, do not blame anyone. If the SC/ST Act is repealed, saying we are all Hindu, do not be surprised.

Keep breaking your heads among these ludicrous statues and this meaningless Ambedkarism. Keep weeping and send the next generation down the path of a thousand years of slavery. After all, nothing else is to be expected from slaves.

Whoever are Ambedkar’s true missionaries and understand the potential dangers of this conspiracy should strongly resist this deification and brahmanisation. They must come out and fight openly against this brazen manifestation of Manuwaad.

Ambedkarism has no place for devotion.

Bhanwar Meghwanshi is an independent journalist and social worker.

Translated from Hindi by Arjun Banerjee, an intern at Navayana.

This first appeared as a Facebook post on 13 April and was originally published on Navayana in an updated form.

The article was edited to note that the Bhilwada programme of the Congress ‘SC Cell’ was called off soon after it was announced.