An Eyewitness Account of Ambedkar's Political Trials in Converting to Buddhism

In conversation with Sadanand Fulzele about his association with B.R. Ambedkar, his involvement in the Deekshabhumi, the state of the Republican Party of India and more.

Note: This article was originally published on May 17, 2017, and is being republished on the occasion of Ambedkar Jayanti.

It is astonishing that not much is known about the man who was a prominent figure in Babasaheb Ambedkar’s historical return to the roots of Buddhism along with nearly half a million people at the Deekshabhumi ground in Nagpur on October 14, 1956. Interestingly, Sadanand Fulzele was not an ordinary man, in any sense, during that period. He was the deputy mayor of Nagpur municipal corporation. Fulzele was elected on a scheduled caste federation ticket in 1952, winning by just one vote. Having dedicated his life to Ambedkar’s mission for life, I asked him to describe his association with Ambedkar and his involvement in the Deekshabhumi function.

“When I was deputy mayor that time the states got reorganised. Nagpur got merged in Bombay, that is, Maharashtra. We people, a deputation of corporation leaders, went to Delhi to meet Govind Ballabh Pant to demand Nagpur as the capital of Maharashtra. In Delhi, I stayed with our member of parliament Tahir Ali Saheb. That time Babasaheb had written about deeksha on October 14 to Mewa Ram Kawade and [Waman Ram] Godbole to come and meet him. Babasaheb asked them whether arrangements could be made for the deeksha. They said, yes it will be done as our own person was deputy mayor in the corporation. They told him that I was in Delhi. Then he asked me to come over. Then I went to meet Babasaheb along with senior person in All India Radio at his residence 26 Alipur Road in the evening. We sat there near the gate. After some time Babasaheb came with the help of Nanakchand Rattu and sat in front of us on the reclining chair. He said, Mewa Ram Kawade and Godbole came and we have now fixed on October 14. Will you arrange the programme. I said yes. And that was the time Babasaheb put the responsibility of the programme on me.

After returning from there, I, Waman Ram Godbole, Kawade and others started looking for a suitable place where deeksha ceremony could be organised and we found this place suitable as there was a big slope and even if the rains come the water would easily flow out. So, finally the selection of Deekshabhumi was done. Babasaheb’s programme was also fixed. Now, the correspondence and other details were to be done and hence the entire responsibility of the programme fell on my shoulders.’’

It was a huge celebration, Fulzele recalls. Photographs of the function decorate his drawing room in Nagpur, each event reverberating his mind. “First Babasaheb took deeksha through Chandramani ji. He was so overwhelmed that he did not raise his head. Then Chandramani ji gave him panchsheel. Then he got up and said now I have become Buddhist. All those who want to have deeksha should stand up. Then Babasaheb gave them trisharan and panchsheel, and later gave them 22 bows. The people were there for two days. Babasaheb spoke for nearly two hours. Later in the night Babasaheb departed for Chandrapur.’’

“Was there any opposition to the dhammadeeksha,” I asked.

“What would they have done? Many people felt that Babasaheb should not take dhammadeeksha and newspapers reported such stories, but Babasaheb responded to all the queries.’’

The Deekshabhumi went on for two days, without any dip in the number of attendees.

Fulzele is not only a witness to Ambedkar’s historical legacy but was also part of the Republican Party of India (RPI). He believes that if Ambedkar had lived for a few more years, perhaps the situation would have been different. Unfortunately, Ambedkar passed away in December 1956, two months after the Deekshabhumi event, and things that should have happened never did.

Fulzele believes that the fight for power was the real reason why the RPI disintegrated. “It was for power. In 1957, RPI was established. Avade Babu wanted to become the secretary. Dadasaheb [B.K. Gaikwad] wanted B.D. Khobaragade. But Avade Babu did not know it and, hence, the next year he, B.C. Kamble and others formed a different party.”

Some have alleged that Ambedkar did not want to hold the dhammadeeksha ceremony because politically, it would have been detrimental for the party. The charge was levelled by Bhau Lokhande, in a conversation with this author. “No, it is not true,” said Fulzele, adding that some people who wanted to contest in the elections suggested the party not hold the conversion event. But according to Fulzele, Ambedkar’s decision was “absolutely correct”.

After Ambedkar’s Mahaparinirvan, Fulzele devoted his time and energy to strengthening the RPI. He served as party president in Nagpur, later becoming Maharashtra secretary and eventually the all-India secretary. Today, Ambedkar has become such a powerful figure that even those who disagree with his beliefs are chanting ‘Jai Bhim’. In fact, many Ambedkarites have joined the Sangh parivar. “There is nothing in the party [RPI] today. It is almost finished. [Ramdas] Athawale is there, but he has also gone with the BJP. Now people do not fear the BJP and people have started going to BJP,” Fulzele said.

His helplessness and exasperation with the political front was evident when he said: “What can be done. There is nothing now. Babasaheb wanted that the RPI to be made up of people from different communities and not be exclusive to SCs. Unfortunately it did not succeed after Babasaheb’s passing away.”

Fulzele said he is happy that the movement is spreading across the country, especially UP. He witnessed the huge gathering of nearly 10,000 people, predominantly those belonging to OBC communities, taking dhammadeeksha on December 25 last year under the spiritual guidance of Bhadant Nagarjun Surai Sasai. “There were [people from] different communities and not one particular community,” he said.

Detractors of Ambedkar have There were rumours about Babasaheb was not from the OBC community. How did the effort to annihilate caste transformed into political caste arithmetic? “Jaati [caste] never goes. It is in our mind. Merely laws can’t eradicate it. Unless there is a change in heart in our mind, jaati can’t go. We will have to work doubly hard.”

Can the dhammadeeksha remove it? “Yes, with dhamma, jaati would be able to eradicate it,” Fulzele said.

On being asked what challenges lie ahead, Fulzele said, “People are fighting. Some are joining others. There are changes. Situations are different. UP has the powerful Bahujan Samaj Party today.”

But how is that the RPI, which was once a strong political force in UP, no longer has a cadre or a prominent leader in the state? 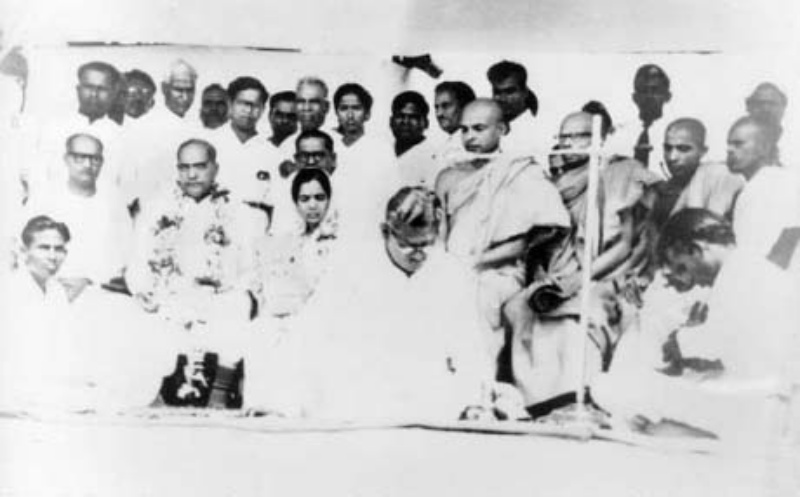 Ambedkar with Savita Ambedkar at the ceremony at Nagpur on October 14, 1956. Courtesy: Navayan

“There is an RPI presence in UP. Maruya sahib was MP. When [H.N.] Bahuguna was chief minister of UP, he gave allurement, power to others and they joined the Congress. The entire RPI got decimated. This was the best way of cooption and purchasing leadership through power. Hence, when Kanshi Ram went with Babasaheb’s elephant [as the BSP party symbol] then people supported him. Nobody would have gone to Kanshi Ram if not for our failure,” he said.

Fulzele acknowledged the hard work done by Kanshi Ram, though he suggested that the BAMSCEF was not initially meant to be a political party and hence they parted when the BSP was formed. “First and foremost, Kanshi Ram was a government servant. He worked very hard and then made BAMSCEF with the help of government servants. Mostly his friends from Nagpur supported him. BAMSCEF leaders were not happy when they formed political party. But he got support in UP and Punjab,” said Fulzele.

What about in other states, particularly Maharashtra where the Dalit Bahujan don’t have their own parties? Is it good to go with communal parties?

“What to do? Athawale’s group is powerful but he is with the BJP. Prakash Ambedkar has a group but he has no follower. Right now Athawale, has got the people’s support.”

He said that the Dalits were not accepting those parties because their own parties have failed them. “Babasaheb wanted an inclusive party and not an exclusively scheduled castes outfit but his dream was shattered after his sudden death. The Buddhist movement is helping socially and culturally but not politically. The cultural movement will bring more changes than the political party,” Fulzele said.

One of the things I always wondered about is why many Amdekarites think Savita Ambedkar, Ambedkar’s wife, was responsible for his death. This charge has been levelled despite many saying that she devoted her life to her husband, and later the cause. Fulzele had no straight answer for me, saying that though he himself does not blame her directly, “The people of Maharashtra had many misgivings about her, and think that she gave Babasaheb a slow poison. Once, Athawale tried to bring her to the dais at a party event, but the people did not accept her.” Fulzele added that he thinks it’s unfortunate that politicians entered this particular discussion. For some reason, in the eyes of people, those who took an extreme position on Savita’s role were seen as more legitimate, while those wanting to take a more balanced view were seen to be betraying the cause, he said.

Fulzele is nearly 90 years old, but continues to dedicate his time and energy to strengthen the Ambedkarite Buddhist movement. In fact, he hopes to develop Deekshabhumi as a historical attraction for people interested in the movement. Fulzele doesn’t write, but one hopes that he would for there is much to learn from someone so closely associated with the movement, witnessing its greatest events.

Vidya Bhushan Rawat is a political analyst and human rights activist based in Delhi. He tweets at @freetohumanity