Ahmednagar police accused of not acting upon Savita Gaikwad and her daughter’s complaints against Rahul Sable for nearly three years.

Vadzire, Ahmednagar: Twenty- year old Asmita Gaikwad sits listlessly around a stack of legal documents that has piled up in her cramped one-room house in Vadzire village, 55 kilometres from Ahmednagar district, over the past three years. These papers, which she has doggedly collected over the course of several complaints made to the police and the state government, stand testimony to the torture that she and her family had endured while fighting the sexual advances and casteism in the hands of a 27-year-old Maratha man, Rahul Sable.

Ahmednagar, categorised as an “atrocity prone district”, is once again in the grip of another shocking crime.

On February 17, Sable, after harassing Asmita for years, had reached her doorstep and asked for her. Her mother, 36-year-old Savita Gaikwad, stood by the door and prevented Sable’s entry into the house. Angered by her resistance, Sable pumped four rounds of bullet into Savita. She died almost instantly. “He held a gun to my mother’s head and asked, you will do anything for your daughter, right? Now die for her,” says Asmita. A bullet had perforated the left side of Savita’s temple and exited from her right cheek. Two other bullets were lodged in her shoulder and one in her palm.

Savita’s cold-blooded murder is the latest of the many atrocities that Sable has inflicted on the Gaikwad family over the past three years. Each time, the police had failed to act. In some instances, according to the Gaikwads, the police even supported and encouraged the accused.

Savita lay in a pool of blood and the horror of the crime was such that no one from the neighbourhood came to help the family. Asmita and her uncle, Savita’s elder brother Santosh, picked up the body and took her to the hospital outside the village, where Savita was declared dead on admission. Sable escaped from the crime scene and has since been absconding.

Also Read: What Lies Beneath the Alarming Rise in Violence Against Dalits?

Asmita’s ordeal first started in 2017, when she was only 17, still a minor. Sable, who lived in the Randhe village, approximately six kilometres from Vadzire, would follow her every day. Fully aware that Asmita’s family would not be able to fight the might of a caste Hindu man, Sable’s harassment escalated. “He would block my path when I was outside and threaten me with dire consequences if I did not marry him,” Asmita says, repeating what she has been telling the police and the magistrate over the past few weeks.

Although poor, Asmita says she and her mother were determined to fight Sable. After a few months of harassment, in 2018, Asmita had filed her first complaint with the Parner police under several sections of the Scheduled Castes and Scheduled Tribes (Prevention of Atrocities) Act and the Indian Penal Code. “The police, after dodging us, were finally forced to register an FIR.” Sable was even sent to jail for a week.

The bail conditions, among other things, had prevented Sable from approaching Asmita. But after his release, Sable only became more audacious. “He started to contact me on my phone, land at my doorstep and even sent his friends to shadow me everywhere.”

Sable, Asmita says, would barge into her college and forcibly sit next to her in class. Students and even teachers were reluctant to intervene and help her. “He would also drive into the company (she worked at a mineral water bottling company nearby to support her education) and harass me,” she says.

“He married me at gunpoint”

On February 11, 2019, while Asmita was on her way to work, Sable had blocked her way, forced her to get into a car and drove her 85 kilometres away to Alandi in Pune district. On February 12, Asmita says, he held her at gunpoint and forcibly married her.

After the marriage, Sable had taken Asmita to his home in Randhe village, where he lived with his mother and father. “Rahul would beat me every day and his mother too tortured me. They both abused me and called me names for belonging to a lower caste. I put up with all this hoping to be rescued from the house someday,” she says. Her younger sister tells The Wire that the family had on several occasions tried to meet Asmita but were turned away each time.

After living at the house for nearly four months, one evening when Sable was not home, Asmita managed to escape. “I had been planning it for days. Finally, when his mother was asleep, I ran away,” she says. Asmita took a bus to Mumbai and went to the house a relative in Navi Mumbai, where she stayed for a few months.

Accused Rahul Sable’s house in Rande village has been locked ever since the incident. His parents have fled the house fearing for their lives. Photo: Sukanya Shantha/The Wire

Unlike the general perception of the Maratha community’s economic status, Sable’s family survived on limited means and possessed only about one acre of land. These limited resources, however, Asmita says, didn’t prevent Sable from gaining clout with the police. “He would move around with the policemen at Parner police station and would also boast about his close contacts with them,” she claims.

Each of these allegations has been mentioned in the complaints Asmita has repeatedly made to the police. Asmita says she knew she could not escape him but did not want to give in. “Each time he threatened me or my mother, we would head to the Parner police station. The police looked at us as a nuisance and would turn us away. When we didn’t budge, they took down our complaint but converted them into a non-cognizable offence,” Asmita says. She has named two policemen – police inspector Pawar and constable Vinod Rohidas Borge – in the statement recorded before a magistrate under section 164 of CrPC. She accuses the duo of colluding with the accused.

“Only if the police had acted promptly, my mother would have perhaps been alive. They killed my mother,” says Asmita, as she bitterly recalls the police’s inaction, and their ill-behaviour towards her and her mother.

Despite several complaints against Pawar and Borge, the Parner police have only transferred them to another police station but have not initiated any action against them. Deputy superintendent of police Ajit Patil, who is investigating the murder, told The Wire that the role of the two policemen is being investigated too.

Savita, who was married off at a very young age (Asmita says her mother would not have been more than 13 at the time of her marriage), had been separated from her husband for over 15 years. Savita and her two daughters had moved to Vadzire around the same time. They have since been living in the Dalit basti, situated outside the village limits. Of the village’s more than 200 houses, just 15 belong to the Scheduled Caste community. The other households are either Marathas or other backward classes. 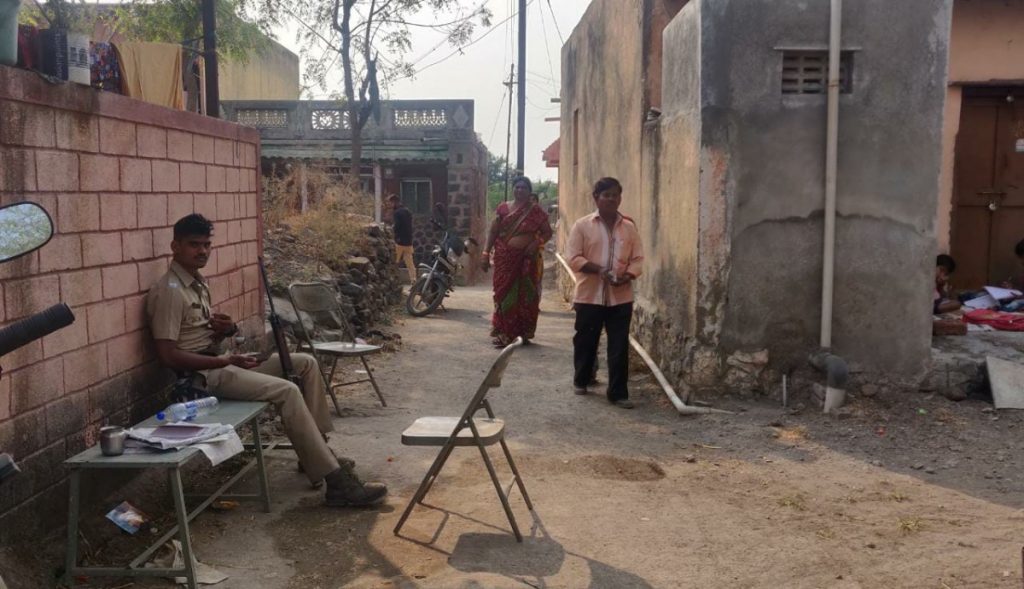 After the killing, Sable had escaped from the crime scene. Investigating officer Patil told The Wire that Sable had switched his phone hours before the crime and has remained untraceable. “Sable ran a mobile shop and he was smart to not leave any trail behind,” Patil said.

The police have, so far, arrested his close aide Suresh Mapari, who was present with Sable at the time of the murder. Other friends of his, like Sanket Supekar and Pawan Dighe, have been questioned and released since the police “didn’t find any concrete evidence against them”.

In 2016, 1,750 cases of atrocities against the Scheduled Castes were registered in Maharashtra. This rose to 1,974 in 2018, along with 8,280 cases pending trial from the previous years. The conviction rate, however, has been abysmally low in the state, even worse than states such as Bihar, Madhya Pradesh, Rajasthan and Uttar Pradesh, where caste atrocities have always been high. Of the total cases disposed of in Maharashtra in 2018, only 78 led to a conviction. In as many as 826 cases, the state failed to prove the case, leading to acquittal.

(Asmita Gaikwad’s identity has been revealed in the report upon her request.)