What the Data Tells Us About 'Sabka Saath, Sabka Vikas'

The Modi government’s failure on crucial development fronts such as farmer incomes and job creation may hold the key in understanding the rapid shift in narrative from human development to nationalism.

India's Prime Minister Narendra Modi reacts as he speaks to members of the Australian-Indian community during a reception at the Allphones Arena located at Sydney Olympic Park in western Sydney November 17, 2014. REUTERS/Rick Stevens 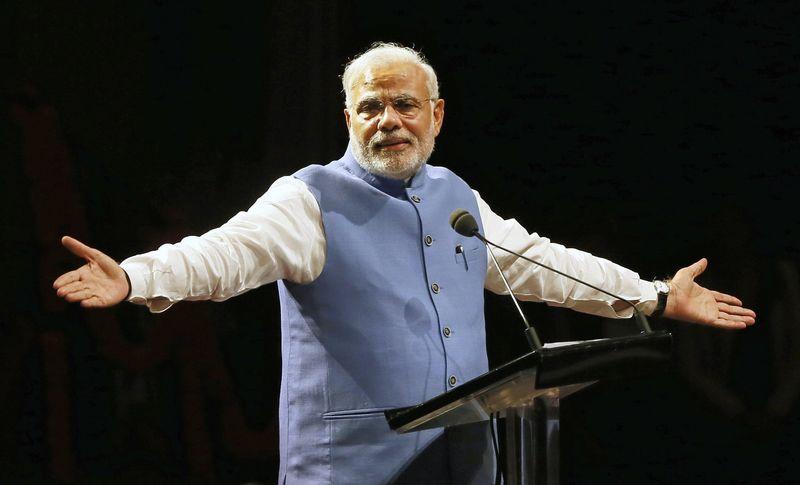 Public memory in India is amnesic. Still, it is difficult to forget that Narendra Modi rode to power in 2014 on the plank of promoting development, aptly captured by ‘Sabka Saath Sabka Vikas’. This is not a novel idea in itself as others too have tried to win over voters adopting similar strategies – succeeding sometimes (‘Garibi Hatao’) and failing on other occasions (‘India Shining’). Three years down the line, it’s time to take stock of the deliverables.

To justify ‘Sabka Vikas’, Modi promised doubling of farm income by 2022, as the sector is home to 47% of our workforce. However, growth in agricultural GDP in the three years after Modi assumed power was 1.7% which is less than half of the sector’s growth in the last three years of UPA-II at 3.6%. This is largely due to two consecutive droughts years in 2014 and 2015 – therefore, the prime minister can be hardly blamed for this.

However, the PM’s policy response to this mounting agricultural crisis is intriguing. His policies mainly took the form of sharing crop insurance premium and directing BJP-ruled state governments (example, UP) to waive agricultural loans. However, benefits of both policies can only be reaped by those who own land and therefore bypasses the most vulnerable sections in the sector namely, agricultural labourers – who are the first to slip into poverty in the face of vanishing livelihoods.

On the other hand, surest way to provide relief to agricultural labourers (for inclusive growth) in drought years is to generate adequate non-farm employment in the rural sector by pumping in money to the Mahatma Gandhi National Rural Employment Guarantee scheme. As Figure 1 above suggests, the government actually reduced allocation to MGNREGA (as percent of GDP) during 2014 and 2015 compared to the immediate past years. It is only in 2016 (Revised Estimates) that the allocation to the scheme has been restored.

This explains the ridiculous rise in MGNREGA wages by Re 1 in many states (Assam, Bihar, Jharkhand, UP and Uttarakhand) and the lowest ever average wage increase in the history of the scheme at 2.7% approved by the Centre in 2017-18.

The next big promise was on job creation and various schemes – ‘Make in India’, ‘Skilling India’, ‘Stand-Up India’ – were launched towards that end. Let us see if these yield result. Unfortunately, employment data in India covering all sectors are infrequent and appear only once in five years.

However, government started conducting quarterly employment surveys (QES) from 2008 to track employment in eight selected sectors – which it considered as ‘labour-intensive and export-oriented’. In absence of regular economy-wide surveys, to get a picture of non-farm employment creation (more likely to be in labour-intensive sectors) and ability to cater world market (for the success of ‘Make in India’) – these sectors may be considered as fair representatives.

Figure-2 above shows that while the rate of job creation in the two year period 2011-12 and 2012-13 was 740 thousands, it contracted sharply by 64% in the period 2014-15 and (April-December) 2016 to only 270 thousands. In fact, if the latter period is compared with the two year period 2009-10 and 2010-11 registering 1799 thousands fresh jobs – then there is a remarkable 84% drop in job creation. One can argue little further as scope of the survey changed after December 2015. Instead of covering six select manufacturing sectors with two services sectors up to December 2015; from April 2016, the data presented in figure 2 pertains to whole of manufacturing sector along with two services sectors. Thus, although there is a problem with strict comparability, but since employment creation in the total manufacturing sector (instead of six select manufacturing activities, which is a sub-set of the total) is considered – the conclusion of falling job creation is strengthened. Therefore, evidence suggests that the problem of ‘joblessness’ compounded after 2014, if we go by the QES (government economists may claim, as indeed they have, that QES does not reflect reality as bulk of the jobs were actually created in the informal sector with many reporting themselves as self-employed – but it must be remembered that in absence of hard data such claims are baseless and no more than mere speculations).

Further, Prime Minister’s dream of transforming India as the ‘skills capital of the world’ –generating adequate jobs in the process – seems to have run out of steam. As a recent government report titled, ‘Rationalization and optimization of the functioning of the sector skill councils’ notes: in terms of imparting skills in 2015-16 only ‘58% of the total physical targets were achieved by MSDE [Ministry of Skill Development and Entrepreneurship] while all other Ministries combined together could do only 42%’. With greater concern the report noted ‘that there is huge shortage of qualified trainers’ and recommended reorientation of the program to ‘concentrate on quality of training and focus on twin objectives, to meet industry skill needs and employment to youth [rather than] … chase numbers’. This observation assumes importance, in light of the report’s findings on the effectiveness of the skill program in enhancing employability of the youth, noting that ‘in 2014-15, a total of 873 students were placed in various trades against an enrolment of 4, 47,350 (0.19%) [students]’. This remains a grave concern as other reports suggest that less than 12% of those trained under Skill India program got jobs. It appears then that the promise of massive job creation was largely belied.

Other standard indicators that reflect government’s priority to encourage development for all is its resource allocation on health and education (each featuring in Human Development Index). This is because education remains the best route for upward social mobility in a society like ours. However, cost of pursing higher education in India has become increasingly unaffordable, thanks to the rapid growth of private universities (presently accounting for around 33% of all universities). In fact, the recent fee hike in IITs has made it almost impossible for the poor to study there. Similarly, with very high out of pocket health expenditure in India easily wiping out life-time savings of even middle class individuals – government expenditure in these two areas becomes crucial. This is more so when resource distribution in the economy is highly unequal – as a recent Credit Suisse report shows that the share of wealth held by top 1% (10%) richest Indians increased from 53% (76.3%) in 2015 to 58.4 % (80.7%) in 2016.

However, figure 1 shows government’s spending on education as proportion to GDP has been consistently less after 2014 and for health there is insignificant change with marginal increase in 2016 (although this is budget estimate, not actual spending). These findings seriously put to question government’s willingness to promote development.

Modi government’s failure in crucial development fronts may hold the key in understanding the shift of narrative from human development to cow protectionism (killing Pehlu Khan in Alwar for saving cows), falsely inventing national pride (making people stand compulsorily to national anthem and beating disabled person for inability to comply), moral policing (anti-Romeo squads in UP), mythical glorification of scientific/cultural past (performance of plastic surgery on lord-Ganesha), among others.

For, in all these cases we do not have standard indicators yet to assess outcomes and more importantly, how these positively contribute to human progress (in fact each of them are significant barriers to human freedom). All we are left with then is the good faith of the ‘Vikas Purush’ and that is not a healthy sign for democracy.