The GST Regime is Damaging, Not Helping, India's Crafts Sector

Already struggling to survive and compete with cheaper machine-made goods, the added burden of GST compliance will decimate self-employed artisans. 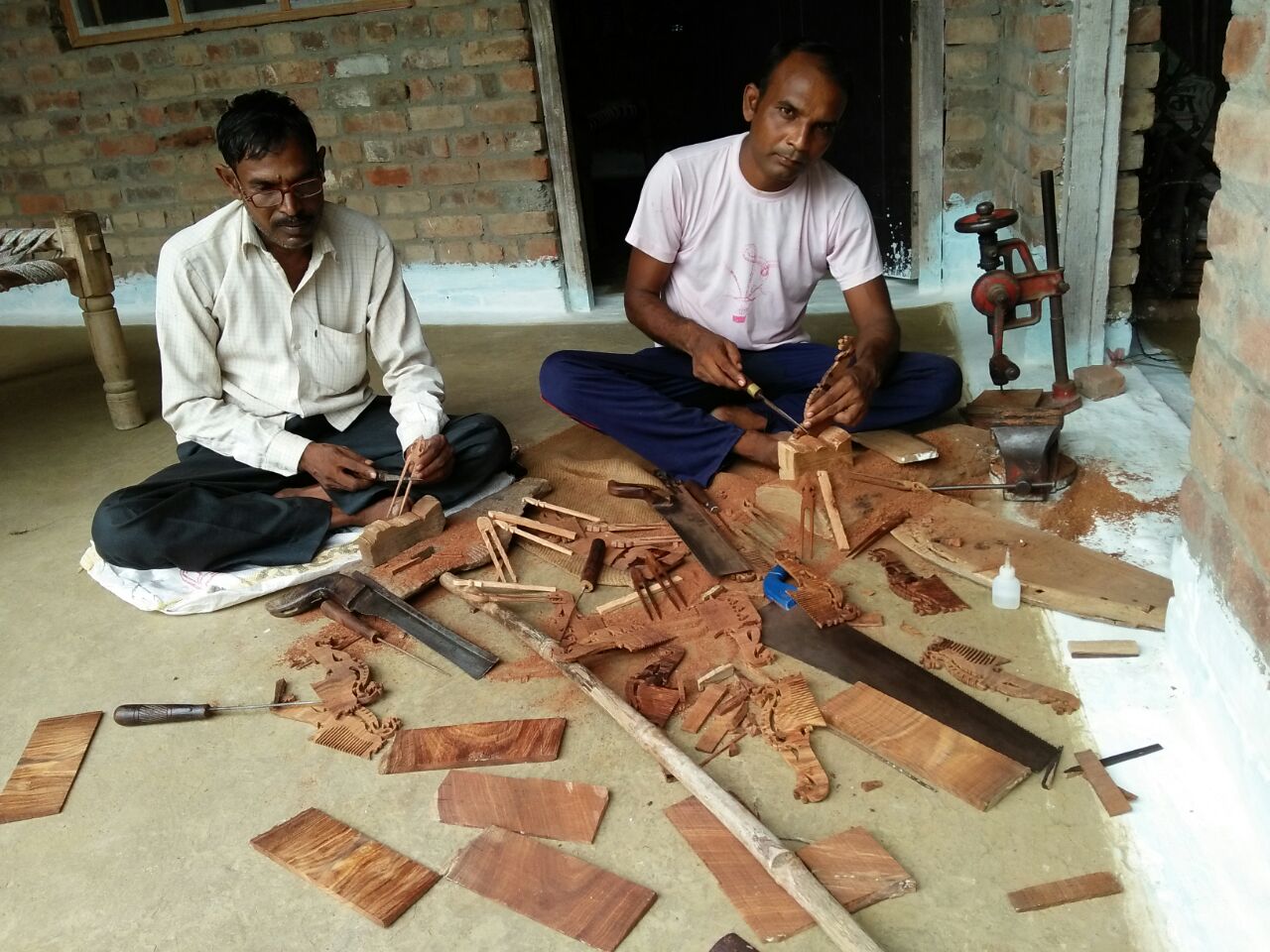 The cost of GST non-compliance is doubled when the formal economy refuses to buy from the local crafts industry. Credit: Meeta Mastani

The transition to the Goods and Services Tax (GST) regime was sold as a reform that would transform Indian industry for the better. Two months later, the plight of craftspeople across India tells a different story.

Yograj lives and works in Kaziwala village in the district Bijnor of Uttar Pradesh. He makes small hand-made wooden items like juda pins which sell for about Rs 25 each. I live in Delhi and work with rural and semi-urban artisans like Yograj, providing them with design and marketing support. I connect them to urban markets directly, and also sell via a network of retail spaces I am a part of. His average bill with me each time is for about Rs 8,000. Over the year, his total billing with me is about Rs 50,000. His total annual turnover is Rs 1,80,000. He is part of a group of nine people. They are also training six young men in their kind of wood working skills. They work in their own homes and most of their ‘profits’ are their own wages.

The new GST regime has made criminals of people like him and me. Artisans who sell across state lines with a turnover under Rs 20 lakhs [2 million] are exempt from filing under GST only if they have a PAN card and send packages through an e-waybill. Yograj has no PAN card and there is no courier in his village that can provide an e-waybill. He usually brings his wares physically with him, and takes the money immediately as he can’t afford to wait for payment. My accountant has asked me to stop working with all artisans who do not have a GST number since it is illegal without all the requirements.

Yograj is just about literate and takes fifteen minutes to make a bill with two items in it. His total wages/profits are about Rs 10,000 a month. With six children, he is at the bottom end of the 78% of the Indian population that earns under Rs 5,000 rupees per head per month. What is he supposed to do according to the GST law? There is no way, either financially or practically, that he can hire an accountant to file the complicated three-times-a-month online returns. It’s not as if his village has electricity at all times in the day either. Compliance within the new GST tax is impossible for most craftspeople. Yograj’s story is repeated in craft after craft, from block printing to weaving to hand-made paper and many others.

Bhurabhai from Dhamadka, Kutch, who was a village sarpanch, says that almost all printing in Dhamadka is on hold since GST started. Big organisations that sell their hand-printed fabric are no longer buying from printers who do not have a GST number. For a printer to file for GST means that, other than the financial burden of paying an accountant to file for them, they also need to physically go three days in a month to the accountant in a city nearby and waste half a day each time at the very least. Craft in India is gasping to survive and compete with cheaper machine-made goods. With this added burden of GST, we can be sure that most self-employed artisans will be unable to survive in this sector.

India’s total working age population is 480 million of which only 7%, or about 33.6 million, is in the organised sector. Of this 7%, two-thirds are employed by the government. A whopping 446 million people, or 93% of adult workers, are in the unincorporated, unorganised sector. A little over half of these are self-employed. Many are semi-literate or illiterate. The craft sector employs about 11 million people of which 43 lakhs are in the handloom sector. This 11 million is almost as large a number as those who work in the organized private sector. It is also the second largest employer in the country after agriculture. We are talking about the lives and livelihoods of an enormous number of people, most of whom barely make ends meet.

The tagline for GST is ‘One Country, One Tax, One Market’. Ironically, it is none of the above. Tax rates differ across sectors and artisans cannot travel or sell freely across the country. Artisans whose annual turnover is less than Rs 20 lakh and who go to craft melas, including government funded fairs, need free transit without fear of harassment at state borders. Right now, they must take a temporary GST number for each exhibition. Hand-made textiles and craft are, after all, the original ‘Make In India’. What is the point of creating new programmes like ‘Make In India’ and ‘Skill India’ if we unpatriotically and cruelly destroy what already exists? The world has come to us for these skills of ours since centuries, and we are still known for them. It will be a travesty if our own government manages to kill these skills by not seeing either the talent or the huge employment they generate as special and worth supporting. Since Independence, these goods have not been taxed because their production employs millions of Indians living on slender margins. Are we claiming that this already fragile, fragmented sector is now capable of filing these kinds of complicated taxes? Are we hoping to wish these people away?

The crafts sector is one of the most sustainable and green parts of the economy. It uses virtually no fossil fuels. Artisans working in the sector have little access to infrastructure compared to urban India but they manage to support themselves. Instead of reducing their options of self-employment in rural India we need to increase them. If they lose their livelihoods, they will reluctantly become part of the great exodus from rural India into small town and metropolitan India, with consequences ultimately devastating not merely for them (for there are no jobs in organised industry anymore, even as per government data), but also for the rest of us. People are not just numbers. When they are pushed to the wall in patently unfair ways, we will all have to pay the social and political price.

After understanding the implications of GST, individuals and organisations like Graam Seva Sanstha and others, have already started a tax-denial Satyagraha movement to make hand-made products GST-free. As people working in this sector we ask for a removal of all GST on hand-made crafts of all kinds. There is already a system of government issued identity cards for craftspeople which can be drawn upon for identification of artisans. Let us not move back towards colonial times.