If the Textile Industry Is to Recover From the Lockdown, It Needs Quick Government Help

The economic shocks that follow the COVID-19 pandemic come at a time when the sector is already struggling from the aftereffects of demonetisation and other declining economic indicators. 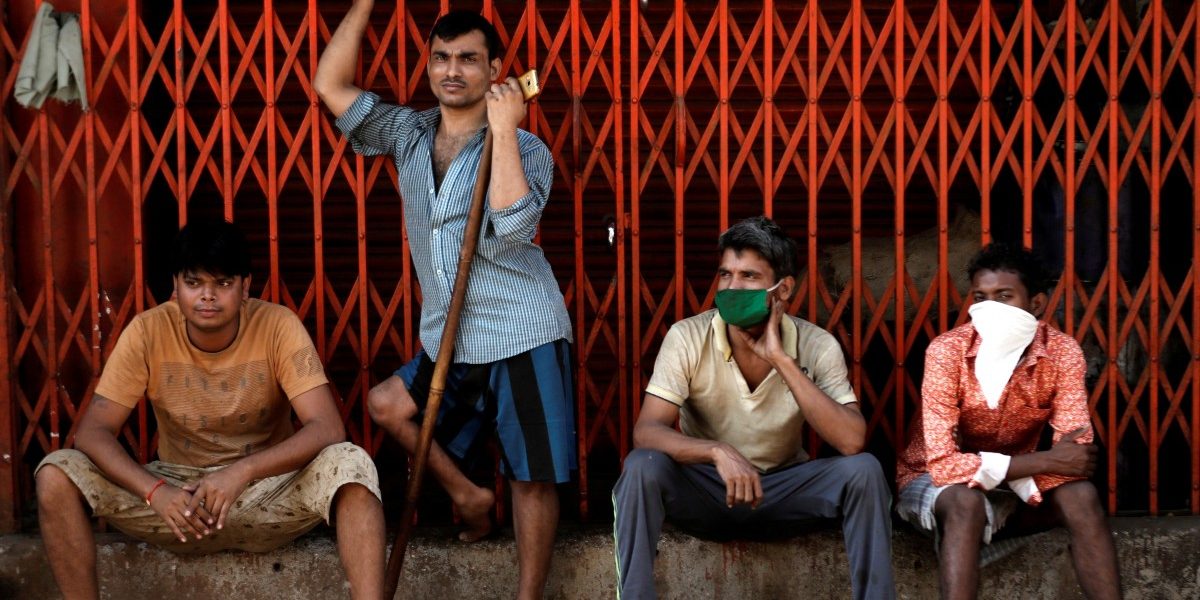 Migrant workers, who work in textile looms, are seen outside a loom after it was shut due to the 21-day nationwide lockdown to slow the spread of the coronavirus disease, in Bhiwandi on the outskirts of Mumbai, India, April 1, 2020. Photo: Reuters/Francis Mascarenhas

India’s textile and apparel industry is in a crisis and needs fixing. Widely regarded as the second-highest employment generator after agriculture, the sector employs around 45 million workers directly and another 60 million indirectly across the country.

The economic shocks that follow the COVID-19 pandemic come at a time when the sector was already struggling from the aftereffects of demonetisation and other declining economic indicators. While there is no denying the need to arrest the spread of the virus by any means possible, including a full or partial lockdown, the need to manage its economic aftermath is just as urgent.

Across the globe, there is near unanimity on the fact that the global economy is already in a deep and prolonged recession of the kind not witnessed since the Great Depression.

Data emerging from most corners of the globe do not hold out any positives for an Indian economy that was already in the midst of a slowdown. Sample this – the US-based retail giant Macy’s has announced that it would furlough most of its 1,30,000 employees while others such as British luxury giant Burberry have forecast a staggering 70%-80% drop in sales. The UK-based retailer Primark has announced a cancellation of all new orders and Inditex (the owner of popular brand Zara) has already written off some $336 million worth of inventory.

Many global buyers are expected to file for bankruptcy or go into liquidation, which would leave textile manufacturers including those in India with crippling levels of bad debt.

Around the world, governments have announced record financial aid packages worth trillions of dollars for their industrial sectors. In the wake of this unprecedented crisis, it is important for policymakers to recognise and plan for well-targeted, industry-specific measures to address these issues.

It is certain that closing stores and factories across the country for a period of three weeks will cost India’s textile and apparel industry dearly. The export sector is already besieged with cancelled orders and a drying up of future orders for the next four to six months. Domestic consumption was probably the last oasis, but with the shutdown of all forms of commerce, stakeholders are left with few options.

Also Read: COVID-19: With No Food or Government Aid, Loom Workers in Bhiwandi Fear the Worst

In urban centres across the country, apparel retailers and garment factories employ millions of semi-skilled and unskilled workers. Without export orders and a restarting of the economy, many will be either forced to shut shop entirely or inflict stringent cost-cutting measures, including layoffs. For those employed here, the option to work from home is largely impractical. In some of the most backward districts of the country, the handloom sector – which employs a significant and often forgotten labour force – will also be forced to drastically reduce output, or cut wages to compensate for the decline in retail sales across the country. Add to that the fact that the sector is driven by consumer sentiment and discretionary spending, both of which are at an all-time low.

Given the current scenario, many Indian industry players have shelved expansion plans indefinitely and have in some extreme instances even been asking customers for contributions to their salary fund. Evidence of the stress in the industry is apparent when most players have started announcing pay cuts to middle and senior management and scaling back of production capacities.

So what can policymakers do at this time? What measures can be instituted for immediate relief, and which ideas will help the sector get back on its feet in the coming months? 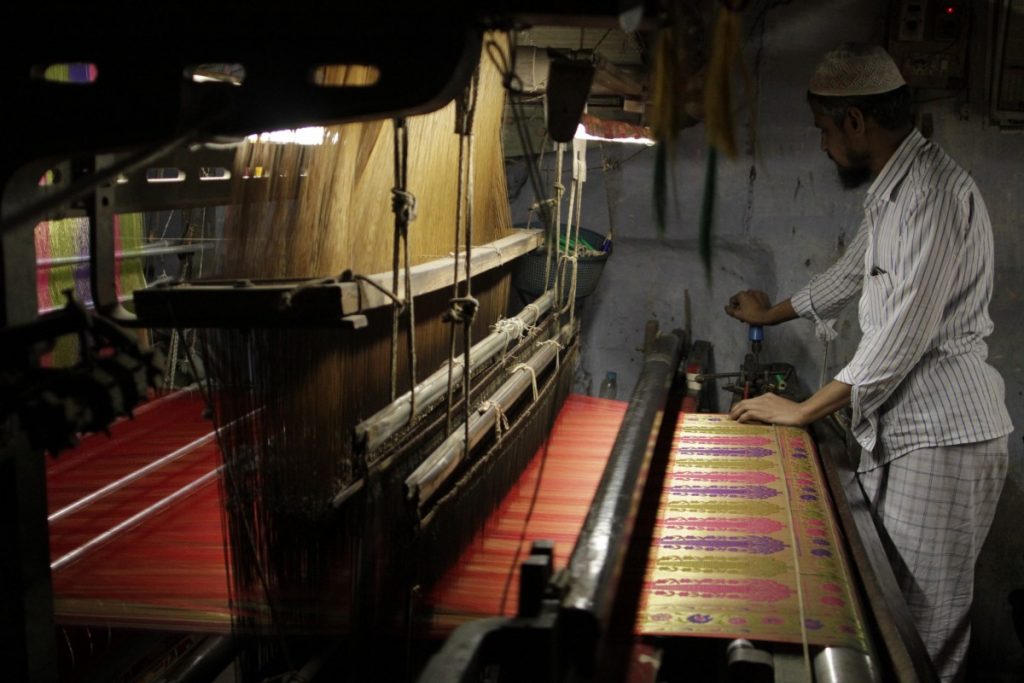 An expensive Banarasi sari being woven at a power loom.

Here are a few suggestions which if swiftly acted upon can avert a potentially explosive situation.

Wage Support: In a bid to contain the adverse economic fallout of COVID-19, this is by far one of the most direct means of reaching government assistance to those who need it the most. Governments around the world have favoured this approach. The UK, to cite just one example has promised to pay its workers up to 80% of their wages to avoid mass layoffs.

While it may be impractical for the government to fund the wage bills of every sector, the textile industry is most in need of such relief. Providing direct wage support of anywhere between Rs 5000-Rs 7000 per worker for even one month (assuming the lockdown is lifted by mid-April) will ensure that the most pressing problem – layoffs and unemployment – is at least partially staved off. It is necessary to ensure that any aid reaches the intended beneficiaries and therefore I would advocate disbursement only through DBT methods directly to employees. Of course, naysayers may argue that such measures will only positively impact the formal sections of the textile workforce, but it will serve those employed in organised apparel and textile units that account for a large percentage of the registered workforce.

GST Refund: The swiftest way to reach the maximum number of stakeholders is to refund GST payments made in part or full for the past six months. This will cover almost the entire gamut of industry stakeholders, right from the handloom weavers in the remote parts of the country to the shopkeepers and traders in the now deserted high streets. It would also be possible to do this on a sector-specific basis since GST refund rates can be decided based on the HSN codes used by registered dealers on their invoices, and will also strengthen the government’s push for greater compliance.

Special Package of Incentives for the Export sector: The export sector is likely to be the worst hit, and will surely lose further market share to competition from other countries, most notably China (which is already recovering from the impact of the virus). The sector will need an immediate package of incentives such as Extra Duty Drawback on exports made in the previous Financial Year (since exports are likely to be slow in coming months), and obviously, a continuation of the same to this Financial Year.

Interest Subvention: While the RBI has already announced a rate cut this can be further augmented by an interest subvention scheme of 1-2 percentage points to be disbursed by the Ministry of Textiles on all Term loans availed by the sector as has been done in the past under the Technology Upgradation Fund Scheme (TUFS).

Reduced GST: Once the lockdown is lifted, the government can provide a reduced GST rate on all textile articles to kick-start demand until the industry recovers sufficiently just as they had done for the auto industry in the recent past.

All of the above may be partially financed by an anti-dumping duty on Chinese textile imports for the next 12 months. It will be no one’s case in the foreseeable future to argue against this measure. And while it may serve as a token measure at best, it will definitely find resonance amongst many in the comity of nations.

While this government has traditionally frowned upon sector-specific relief measures, it is worthwhile noting that textile industries around the world—including those in more developed economies such as China, Belgium, and Italy—are among the most heavily subsidised in their respective countries as they are important sources of employment

This is equally if not more true in India, where this sector has employed millions of ordinary Indians since Independence. The prime minister himself represents a constituency that is one of India’s leading textile hubs – Benaras (Varanasi) – where thousands of skilled and unskilled workers depend on the textile sector for their livelihoods.

While I fully understand that all of these measures may also be addressed by fiscal and monetary stimulus by the government and RBI, the textile and apparel industry requires special attention given its role as the second-largest employer of human capital in the country.

K. Radharaman is a textile designer, fashion retail business owner, and founder of The House of Angadi.