It also characterised recent decisions taken by CBI, ED and income tax department as "attempts to intimidate and paralyse" the news organisation. 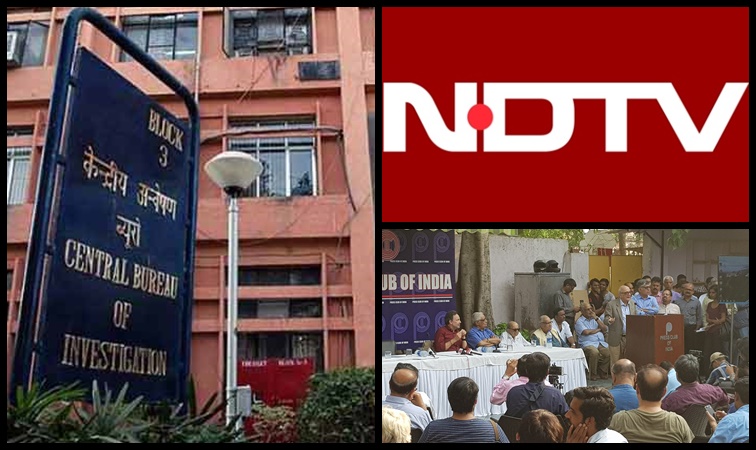 New Delhi: Broadcast channel NDTV has called a tax demand notice of Rs 429 crores from the income tax department (IT department) “blatantly unlawful” and characterised it as part of a larger attempt by various government organisations to “intimidate and paralyse” the news organisation.

In a statement issued on Friday, the TV channel – which was subject to a series of CBI raids last month over the issue of allegedly causing a loss of Rs 48 crore to ICICI bank – stated that it was currently facing “new attacks from the CBI and enforcement directorate”.

“In short, there is a concerted and orchestrated three-pronged attack on NDTV by the CBI, enforcement directorate and income tax department,” the statement said.

Over the last five years, the income tax department has launched investigations into NDTV over tax liabilities, in the range of Rs 450 to 500 crore. Last week, the Income Tax Appellate Tribunal (ITAT) upheld the IT department’s tax demand on a $150-million investment by a US television network in NDTV in 2008. At the time NDTV said that the ITAT’s order had “numerous inconsistencies and contradictions”.

This week, NDTV received a demand of Rs 429 crores from the IT department, a letter that allegedly stated that the broadcast channel had to pay the amount “immediately now”.

“A demand for immediate payment without any notice period is unheard of and smacks of sinister motives by the IT Department. NDTV will not take such arbitrary and illegal action lying down and will take appropriate action in the matter,” the company said in its statement.

According to the statement put out by NDTV, the income tax department’s letter is blatantly unlawful for four reasons:

1) The IT department has not even completed the assessment of NDTV as directed by the Income Tax Appellate Tribunal (ITAT).

3) It is unknown in law to make this sort of “partial tax demand” without completing the entire tax assessment.

4) Income Tax law only recognises one assessment order – and the IT Department must complete the assessment including the four new factors raised by the ITAT.

In addition to this, NDTV states that it still has 120 days to appeal the ITAT order, and that the tax department has acted before it could do so.

The news organisation believes that the IT department’s urgency “reflects instructions to punish NDTV” and that is a “warning to the media at large of the consequences of balancer journalism”.

According to the broadcast channel, both the CBI and Enforcement Directorate (ED) have also stepped up pressure over the last week.

“In an undisguised fishing expedition, the CBI has sent NDTV a letter demanding documents from NDTV and its subsidiaries for an unspecified period – this despite NDTV having supplied more than 500 pages of documents only two weeks ago. Strangely, the CBI does not acknowledge the receipt of these documents,” NDTV said in a statement.

The ED, on Thursday, informed the Bombay High Court that it had started investigating NDTV for violations under the Prevention of Money Laundering Act. Over the past five years, the ED has launched investigations into these allegations.

NDTV, however, maintains that it has not been informed of such charges.

“The ED has already spent a good part of the year summoning NDTV management and questioning them repeatedly, without informing the company of what it has done wrong. The government is making clear the implications of fearless journalism. Despite the illegal and massive pressure, NDTV will not allow its coverage to be affected by these shameful tactics.”