In its latest quarterly results, which saw a Rs 409 crore loss, the independent auditor has raised doubts over the Anil Ambani-led firm's ability to continue as a "going concern". 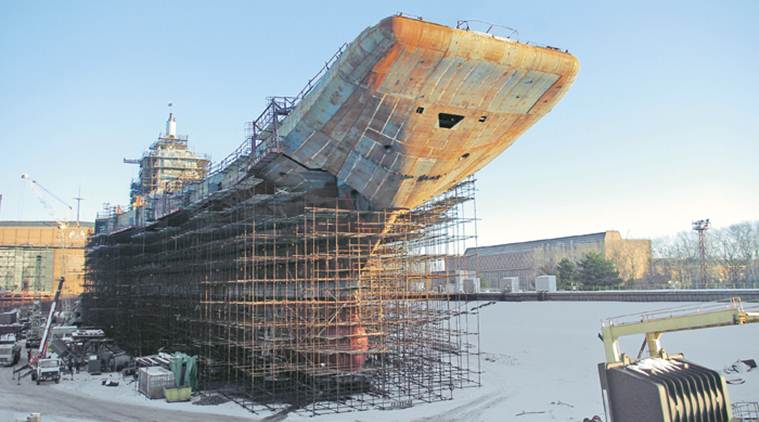 New Delhi: Shares of Reliance Naval and Engineering (RNE) slumped by over 12% in afternoon trading on Tuesday after the company’s independent auditors questioned the Anil Ambani-led firm’s ability to “continue as a going concern”.

What is hammering the stock, however, is the sobering assessment of the company’s future put forth by the firm’s independent auditors (Pathak H.D. and Associates).

In an added statement to the company’s accounts, the auditor paints a bleak picture of RNE’s financial picture: “… the holding company [Reliance Naval Engineering] has been incurring cash losses, its net worth has been substantially eroded as on 31st March 2018, loans have been called back by secured lenders, current liabilities are substantially higher than current assets…”

It also acknowledges that applications have been made to the National Company Law Tribunal under the Insolvency Bankruptcy Code and “winding up petitions have been filed before Hon’ble Gujarat High Court for recovery of their dues by a few operating creditors”.

“These conditions indicate the existence of a material uncertainty that may cast significant doubt on the holding company’s ability to continue as a going concern,” the report notes.

“The appropriateness of assumption of going concern, recognition of DTA and evaluation of recoverable value of its noncurrent assets is critically dependent upon the approval of Holding Company’s resolution plan by the secured lenders, the Holding Company’s ability to raise requisite finance and generate cash flows in future to meet its obligations and to earn profits in future.”

The company itself however emphasies that it has approached its lenders for an “appropriate resolution plan with the objective to make the operations of the company viable and sustainable”.

In particular, it blames a “downtrend in the shipbuilding globally” and takes a gentle stab at the Make-in-India push in India’s defence sector, noting that the process of awarding government contracts  “has been deferred in respect of many large orders for a variety of reasons”.

All of these factors put together, the company says, have resulted in “temporary financial constraints on the company, losses in the operations, erosion of net worth and calling back of loans by secured lenders”.

“The company is participating in several business opportunities both in and outside India. We are hopeful to get business in the coming years,” the company said as part of its quarterly results notification.

It’s unclear whether Reliance Naval Engineering ‘s (RNE) Rs 8,950 crore loans have been classified as non-performing assets (NPAs) yet, in a potential development that would force lenders to step up provisioning and prepare a resolution plan.

If RNE loans are finally declared NPAs, SBI and IDBI will be hit hard as they have the largest exposures to the defence equipment manufacturer, according to a report authored by independent analyst Hemindra Hazari and published on SmartKarma last week.

However, private lenders HDFC and YES Bank, whose exposures to RNE are otherwise not significant, too could be left red-faced as they have been cagey about their NPAs.

In September 2017, it was reported that RNE’s loans have already been tagged as Special Mention Account (SME)- 2, which means interest and loan repayment are pending for over 60 days. The company, however has so far managed to keep its its loan accounts from becoming an NPA so far, which only happens when repayment has been kept pending for more than 90 days.

When The Wire contacted the company for a statement regarding its loans and NPA situation, it pointed us to a stock exchange notification it had made in early March 2018.

On March 1, 2018, Reliance noted that the loans account had been either irregular or sub-standard even before it acquired the company (Pipavav Defence and Offshore Engineering, later renamed to Reliance Naval Engineering) in January 2016.

However, with the central bank’s new and stricter NPA guidelines, it stated the “said loans will be either classified as irregular or sub-standard as the case may be”.

According to people with knowledge of the matter, RNE failed to service its interest for the October-December 2017 quarter. Following that, it tried to negotiate a restructuring of loans with lenders.

Sources say lenders have tried to restructure RNE’s debts but have struggled to reach an agreement amongst themselves. Now, the delay in dues payment has likely increased to 90 days, making it difficult for the borrower and lenders to keep loans from becoming classified as NPAs.

In RNE’s annual report for 2016-17, auditors had highlighted that payment of interest and principal aggregating to 1,950 crore was overdue on the company.

Auditors also red-flagged company’s default on repayment of a Rs 7.33 crore taken from Yes Bank. RNE’s financial performance has worsened in 2017-18, with revenue tanking and interest burden jumping. That has resulted in mounting losses for the company.

“In the quarter ended March 31, 2018, the Indian banking and financial institutional industry is likely to add Rs 90-100 bn as NPA from this single account (RNE),” Hazari has written in the recent update.

RNE’s debt woes stretch back to how it got into the defence industry – through the acquisition of debt-laden Pipavav Defence in 2015-16.

Anil Ambani’s Reliance Infrastructure essentially scooped up the firm in a fire sale, as the shipyard’s founder-chairman Nikhil Gandhi was under pressure over the firm’s Rs 7,000 crore debt.

In 2016, Reliance Infrastructure announced the acquisition of a controlling stake in Pipavav Defence for up to Rs 2,082.3 crore. The purchase agreement at the time saw Reliance buying an 18% stake from the promoter group led by Gandhi (for roughly Rs 820 crore, which at the time was a 17% discount to the prevailing share price). This gave it effective management control.After this, according to the terms of the agreement, Reliance would make an open offer for an additional 26% stake for a total of Rs 1,263 crore.

“The company was in CDR (corporate debt restructuring) when it was acquired by Reliance Infra (in January 2016). Post takeover, Reliance Infra has initiated steps for exit from CDR and a new debt financing package. Upon implementation of the said new financing package, the account will become regular,” the firm has noted in the past, when asked about its debt burden.

Towards the end of 2017, the name of the company was changed to Reliance Naval and Engineering.

In March this year, The Wire had reported how, in a curious series of developments, Reliance Infrastructure issued a Rs 5,000 crore arbitration notice against the founders of Pipavav Defence.

The notice – which named Nikhil Gandhi, Bhavesh Gandhi and their companies SKIL Infrastructure, Grevek Investments and SKIL Shipyard holdings – said that it was entitled to claims for Rs 5,440.38 crore for “breach of warranties under the purchase agreement” between Reliance Infra and the “founder promoters”.

According to legal sources with knowledge of the arbitration process, Reliance discovered what it believes are serious breaches in representations made by the founder promoters, revolving around the state of affairs and governance standards of the company.

YES Bank, which has lent Rs 485 crore to the RNE, has been evading questions relating to impact of the defence equipment manufacturer’s growing difficulty to repay loans on its asset quality.

“For Yes Bank, the impact of the recent RBI guidelines on our Restructured Book as well as on exposures to entities with systemic exposures above Rs 1 bn (Rs 100 crore) is minimal and it doesn’t alter the Bank’s outlook on its credit / asset quality parameters,” the bank management said in reply to a query during a recent Q&A session with investors.

“The slippage of RNE to NPA for Yes Bank may marginally move the needle on the bank’s overall credit costs, but nevertheless the size of the exposure is significant enough to forewarn analysts – a single account constitutes 16% of the bank’s 3QFY2018 gross NPAs of Rs 29.74 bn,” Hazari has written in this note.

Although HDFC’s exposure (Rs 175 crore loan) to RNE is quite small compared to the size of its asset size, it, nevertheless, highlights once again the neglected research subject of HDFC’s corporate exposure, the independent analyst has said.

Pointing out that in the first quarter of 2017-18, HDFC  had taken a hit on its exposure to Essar Steel, Hazari says, “It remains to be seen whether HDFC, like most banks, will classify the account as NPA when it declares its fourth quarter results.”

Hazari has sounded a note of caution, saying “HDFC’s corporate asset quality has come under some strain, first with Essar Steel and now to a lesser extent with RNE. It is important for analysts to closely examine HDFC’s corporate exposures because when two cockroaches have crawled out, there may be more in the nooks and crannies of this august home.”