While increasing marginally, the share of philanthropic contribution by domestic companies and foreign sources decreased in the overall pie in FY'20 in comparison to FY'19.

New Delhi: The share of philanthropic contribution by domestic companies declined from 29% in FY’19 to 28% in FY’20 in the overall pie, according to the 11th edition of the India Philanthropy Report 2021.

The share of foreign funding, which has seen an increased scrutiny by the central government, has also declined from 31% in FY’19 to 25% in FY’20.

The report, collated by Bain and Co. in collaboration with Dasra, was published on March 15. The share of individual philanthropists increased by 42% from Rs 21,000 crore in FY19 to Rs 30,000 crore in FY20. Family philanthropy accounted for almost two-thirds of the increase in funding since FY19. (The wealth of billionaires in India grew by 35% between April and July 2020, according to the Billionaires Insights 2020 report published by UBS and PwC.)

However, despite such an increase, the social sector remains underserved, the report highlighted, mentioning India’s poor ranking (117th) on the Sustainable Development Report. It estimates the annual demand for social sector funding at 21.2 lakh crore by 2025. 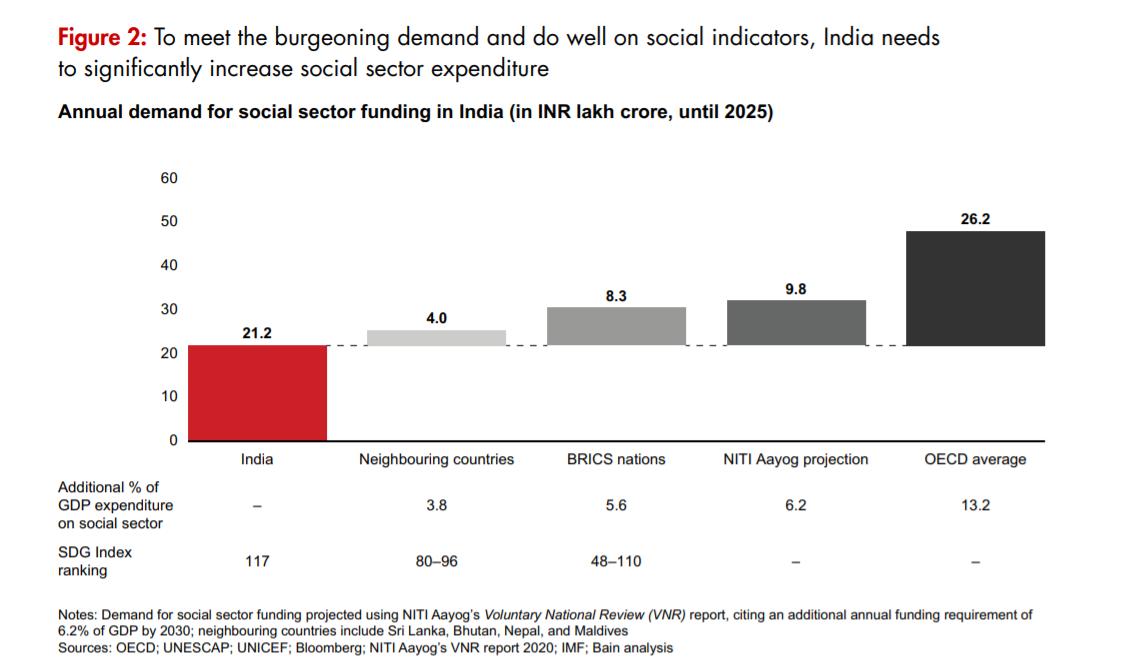 The report added, “The profitability of listed companies declined by 62% in the months immediately following India’s initial Covid-19-induced lockdowns. Therefore, the corpus available for CSR, which grew by 17% from 2014 to 2019, is expected to decline by 5% in 2021.”

It also highlighted that the corporate social responsibility (CSR) corpus has shifted away from traditional non-profits and sectors to Prime Minister’s Citizen Assistance and Relief in Emergency Situations (PM CARES) and other COVID-19 relief initiatives.

Dasra conducted a study on 125 nongovernmental organisations which found out that one in two NGOs have their income base restricted to 60%. With such challenges, including reduced foreign funding due to stringent Foreign Contribution Regulation Act (FCRA) rules, NGOs struggle to remain secure.

International non-profit contributions had already declined by nearly 30% over the past five years, on account of changes in regulations under the Foreign Contribution Act (FCRA) of 2010. The 2020 amendment discourages soliciting foreign contributions and collaborations, provides for stricter penal provisions against NGOs, and detrimentally affects organisations working on non-programmatic work, such as advocacy and capacity building.

The report quoted advance estimates by the Ministry of Statistics and Programme Implementation (MoSPI), suggesting that Indians are likely to see a decline of 5.4% in their per capita income (from Rs 1.32 lakh to Rs 1.27 lakh) in FY21. This decline will cascade into their charitable giving.

While education- and health-focused funding receive a significantly higher share of domestic philanthropic funding, contribution to gender equality indicators lag behind. The report reveals that the personal experiences of wealthy donors are a key factor in this bias. 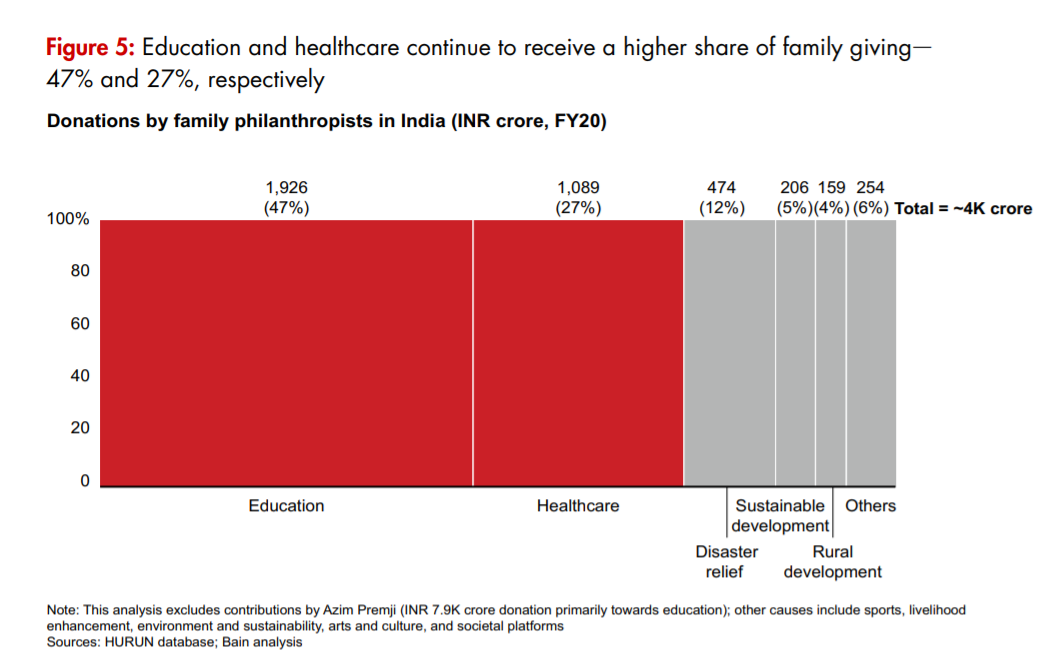 Explaining the possible factors behind such unevenness, the authors of the report told The Wire in an emailed statement: “Family philanthropy having biases is not really a problem by itself. The drivers are individual preferences, especially as such philanthropy is quite often, very personal to the family or the donor. As we see in the report, health and education have a huge preference amongst family funders relative to other causes. The good thing about family philanthropy is that – given the personal nature of giving, the flexibility which donors provide the non-profit is quite considerable.”

The authors further said, “As an example during the pandemic, family funded non-profits had greater ability to repurpose their money, both in terms of causes and also how they spent it than others. This flexibility can be used to broaden the base of causes, which is relatively hard to do with other classes of donors.”

When it comes to disparity in resource distribution, most wealthy families are based in metro cities like Mumbai, Delhi and Bengaluru, accounting for 77% of ultra-high-net-worth individual (UHNI) wealth. They contribute to nearly 85% of total actual donations, leaving a greater need in “aspirational districts”.

Interestingly, despite earning a small share of wealth, technology companies contribute the most towards philanthropy. 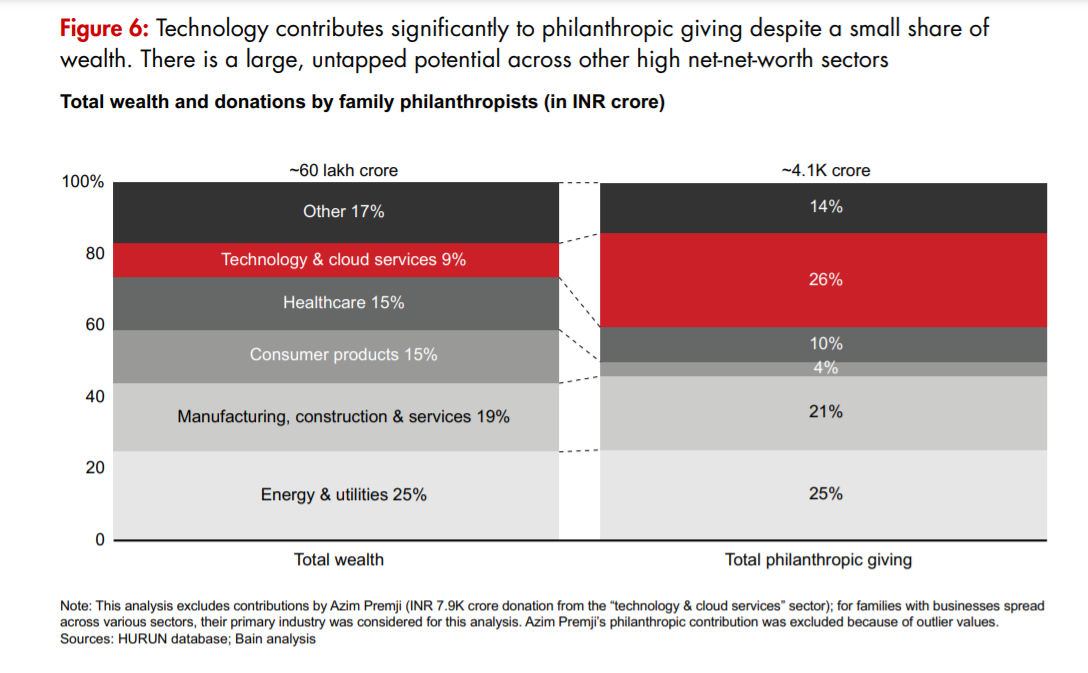 Indian philanthropists donate a smaller portion of their wealth relative to countries such as the US, creating substantial room for growth.
“This difference is in part a result of the tax advantages that philanthropy confers to donors in the context of estate and inheritance taxes in other countries. India does not offer such benefits,” the report explains. 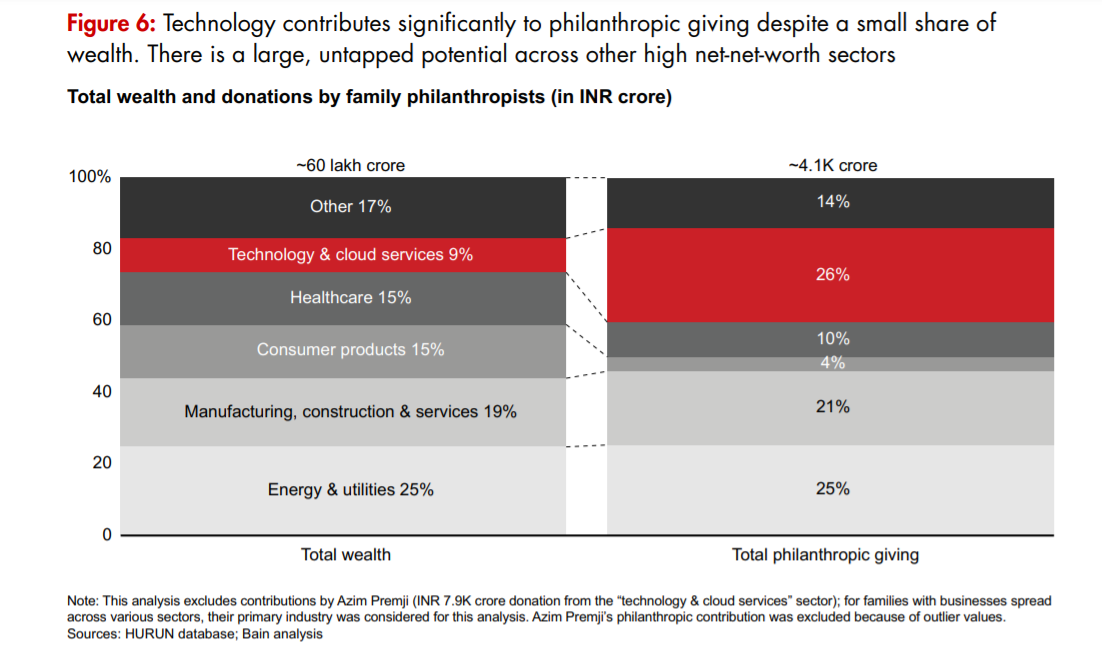 The report adds that if the ultra-high-net-worth families start giving in line with their global peers (2% to 3% of their wealth), family philanthropy could generate an additional annual investible corpus of Rs 60,000 to 100,000 crore for the non-profit sector.pih