At the source of the problem was the rather prolonged monsoon which only began its withdrawal on October 9. 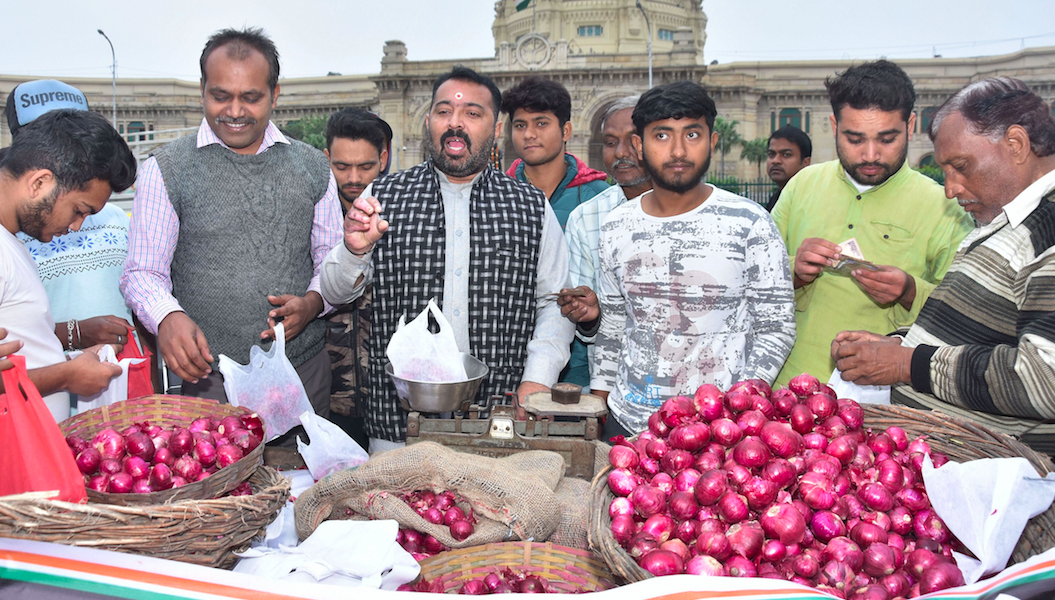 Congress workers sell onions in front of the Vidhan Sabha during a protest against the government for failing to control the soaring prices of onions, in Lucknow, on November 29. Photo: PTI

New Delhi: The price of onions has soared enough for it to become a commodity which has caught the fancy of thieves.

On Wednesday night, a group allegedly stole 250 kilograms of onions from outside a shop in Surat. The total value of the loot, based on the prevailing retail price in Sura, is around Rs 25,000.

Rising onion prices have proven to be a headache for the government since September when the problem first began to rear its head as retail prices started touching Rs 70 a kilogram.

At the source of the problem was the rather prolonged monsoon which only began its withdrawal on October 9 as opposed to its usual withdrawal date of September 1, according to the India Meteorological Department. This was the most delayed withdrawal of the Indian monsoon, ever.

For the onion crop, this was bad news as the major onion producing states of Maharashtra and Karnataka continued to receive rain when the crop was to be harvested in October and even in early November.

Maharashtra, which produces around 38% of India’s onion produce, received 1.5 times its average rainfall in the harvest period between October 1 and November 6.

Karnataka produces around 12% of our onion crop and it received 65% more rainfall than its average in the same period.

Due to the unseasonal rain, fields were flooded and the crop could not be harvested at peak time, leading to widespread crop damage.

So, about 50% of India’s onion produce was severely affected by unseasonal rain caused by the delayed withdrawal of the monsoon.

In both Maharashtra and Karnataka, it is estimated that a third of the kharif crop area has been damaged. Estimates also say that as much as 100% of the onion crop was damaged in certain areas of Maharashtra.

Primarily, a decline in supply of the bulb in the kharif season is the cause of soaring onion prices across the country. The rates have now touched around Rs 100 a kilogram in some of the major cities.

Why was the monsoon withdrawal delayed?

Elena Surovyatkina is a senior scientist at the Potsdam Institute for Climate Impact Research in Germany. Her expertise lies in theoretical physics and in theory of critical phenomena.

Surovyatkina had forecast on August 9 that the Indian monsoon will begin its withdrawal from Central India between October 14 and 24.

Both the onset and withdrawal of monsoon are caused by differences in land and sea temperatures. The onset happens when in the summer, land warms faster than the sea, driving moisture-laden winds from the Arabian Sea and the Bay of Bengal onto the Indian subcontinent.

She analyses temperature data for the Vidarbha region in Central India and in North Pakistan and Afghanistan, which is the outer boundary of the monsoon.

According to her, the critical temperature for monsoon to begin its withdrawal is 27°C in these two regions. But, Surovyatkina told The Wire that even in the last week of September the daily average temperature in North Pakistan was 31.5°C.

“It is unusually high, typically for the beginning of September. This is why monsoon has not begun yet to withdraw from the North-Western boundary of India,” she had told The Wire on September 29.

Temperatures in North Pakistan and Afghanistan are key for monsoon withdrawal to begin as these regions form the outer boundary of the Indian monsoon.

On October 14, Surovyatkina’s forecast was proven right as the monsoon only began its withdrawal from central India on that date.

“The end of the season has shifted due to very high temperature on the periphery of monsoon in Pakistan and Afghanistan. It takes longer time when the whole continent cools down to the temperature of monsoon withdrawal,” Surovyatkina said.

In a 2016 paper, Surovyatikna and her colleagues noted that of the 13 monsoons between 2003 and 2015, withdrawal was delayed in nine.

“The withdrawal date of the monsoon has certainly shifted and the shift has happened because temperatures in North Pakistan and Afghanistan have been higher than usual,” she said.

When this correspondent asked Surovyatikna if she would attribute these higher temperatures to climate change, she said, “You can take the example of Kuwait and Saudi Arabia which recorded their highest temperature on earth reaching 52.2°C in the shadows and 63°C under direct sunlight.”

“In the Indian context, temperature in the Vidarbha in Central India reached 47.8°C. It is the highest temperature in existing records in this place. If temperatures will be that high then extreme weather events like we saw due to the delayed monsoon withdrawal this time will continue. The more the gradient between ocean and land temperatures, there will be more precipitation over land,” she told The Wire.