In L’Affaire Nirav Modi, Echoes of Jatin Mehta’s Winsome Diamonds Where a Dead-End Is Looming

The ball in the Jatin Mehta case is now in the CBI and Enforcement Directorate’s court. They will need help from the UAE government, but are unlikely to get it.

Hyderabad: Over the last week, India’s investigative agencies have never looked better. They have rushed en masse to the offices and glittery showrooms of diamond czar Nirav Modi across the country in search of answers. If one goes by figures leaked to the media,  these agencies have already recovered almost half the money Modi owes to the banks.

The Nirav Modi scam has also given to revisit the history of banking scams in India – everything from Vijay Mallya to the Harshad Mehta scandal.

Curiously, there has been less attention focused on the case of diamond merchant Jatin Mehta.

Mehta, who is the main person associated with Winsome Diamonds and other group companies, is likely the second largest defaulter (nearly Rs 7,000 crore) after Mallya in India Inc’s corporate history. Modi and his uncle have now replaced him.

Modi and Mehta have more in common than one might think. They are both Palanpur merchants from Gujarat, both diamond merchants that walked the same path of precarious funding to reach their ultimate destination as defaulters.

Both of them raised massive loans through letters of credit from public sector banks before making a quick exit from the country. Strangely, in both cases, Punjab National Bank has also been left red-faced, holding the tragically short end of the stick.

Mehta used seven companies including Winsome Diamonds and Jewelry Limited, a listed firm, to raise Rs 4,687 crore. The Standard Chartered Bank-led consortium, consisting of 14 banks, had provided these loans in tranches from 2009 to 2012. All these credit facilities were provided based on overseas orders that the companies had got from UAE companies. Just before the devolvement of the loans, Mehta left the country.

In a remarkably similar process, Modi too raised huge loans through letters of understanding (LoUs). Unlike Mehta, however, Modi appears to have received all the loans in an illegal manner with the help of corrupt bank staff. Latest media reports indicate that Modi, his brother, uncle and wife have all left the country.

While Mehta’s allegedly criminal activities are largely based around the UAE, Modi targeted a single bank branch to perpetrate his fraud.

Both diamantaires are linked, by marriage, to some of India’s most wealthiest and influential business families. Mehta is a close relative of the Adani family – his son Suraj, is married to Krupa, Gautam Adani’s niece. Modi’s brother (Neeshal), on the other hand, is married to the niece (Isheta) of Reliance’s Mukesh Ambani.

The Nirav Modi affair offers an opportunity to revisit Mehta’s case, where nothing much has done after a number of FIRs were filed by the Central Bureau Investigation in 2017 based on a complaint from three banks.

Mind you, the FIRs were late. The loans were defaulted on in 2013, and by 2014 there were whispers and allegations of criminal conspiracy. However, since the FIR there have been no overseas investigations, no arrests – not even the filing of a chargesheet.

Barring the interrogation of a few bank employees linked to the case, investigative agencies have done precious little to recover public money. In August 2016, the Enforcement Directorate (ED) leaked to the media that it was contemplating asking Interpol to issue a red corner notice to Mehta. Till date, that has not been issued.

The banks themselves have continued to remain mute spectators, even though one of them specifically alleged in their complaint that there was a criminal conspiracy in the case. 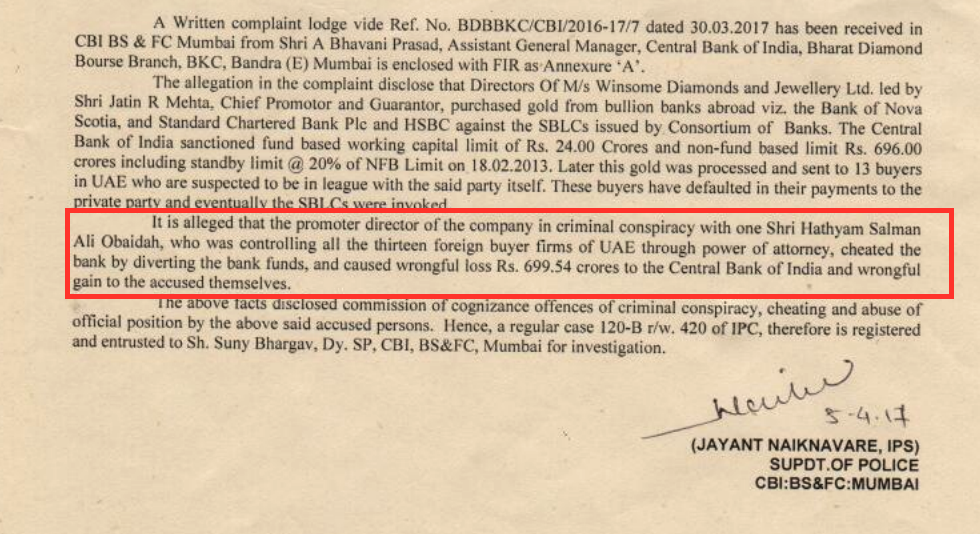 Screenshot of one of the FIRs filed at the CBI’s branch office in Mumbai in April 2017.

ED officials are currently waiting for a response to the Letters Rogatory (LR) that they had sent to the overseas countries related to this case.

How the Mehta case unfolded was simple: Winsome imported gold on the back of standby letters of credit given by Indian banks in favour of international bullion banks which supplied the gold. Winsome then used that gold to make jewellery that was exported to 13 clients in Dubai. The general idea was that Winsome would pay back the banks once they received payments from the Dubai clients. Winsome and Forever, however, have alleged that the buyers could never pay up due to losses suffered in alleged over-the-counter derivative bets.

The banks and CBI believe that all of Winsome’s 13 UAE-based buyers were allegedly in connivance with Mehta and that they siphoned off the funds.

“(Promoter) Jatin Mehta and his employee directors of Winsome Diamonds and Forever Precious Diamonds and Jewellery in criminal conspiracy with one Haytham Salman Ali Abu Obaidah, diverted the funds to United Arab Emirates (UAE) and did not repay the outstanding of Rs.1658.08 crore to PNB (Punjab National Bank).”

The primary defence of Winsome Diamonds is that it has won a case in a Sharjah court against the UAE entities. In a filing to the Indian stock exchanges in 2016, they argued that the a Sharjah court had ruled in their favour and ordered some of the buyers to pay up $27 million.

“All transactions are examined by the experts. Court had ordered the UAE companies to pay back the dues with 5 percent interest,” the company said, quoting the translated judgment copy. It also rejected the allegations that the money was laundered through fictitious firms.

However, the court order submitted by the company throws up other interesting facts. The Sharjah Federal Court of First Instance’s order points out that it appointed a “account expert” to look at the documents submitted by Winsome Diamonds.

A screenshot of Sharjah Federal court of First Instance’s judgment delivered on  July 13, 2015.

A careful reading of the order shows that there was no official investigation by UAE authorities – instead an “account expert was delegated” (essentially a panel of lawyers and accountants) to probe the charges.

All the 13 defendant companies, allegedly controlled by Haytham Ali Salman Abu Obidah, rejected the ‘account expert’s’ report, saying that the original books were not examined by the expert. All companies filed an appeal against the first instance court’s order.

Meanwhile, it is learnt that Indian authorities received a report from Sharjah Federal Court. According to media accounts, the report gave a strange twist in this case. The report says:

“Investigations of the books of Al Haytham, a Jordanian national who has been buying gold and diamond jewellery from Winsome and Forever confirm that the defaults were due to a commercial situation for getting overexposed to the credit risk of a few buyers.”

In other words, it gave a clean chit to both the parties from the Indian perspective. Mehta’s dealings with the UAE companies were genuine and Al Haytham Ali was bankrupt due to derivative trading. In a nutshell, the Sharjah court’s report suggests there is no conspiracy or money laundering in this case and has also indirectly hinted that Haytham can’t pay back his dues as he lost everything in derivative trading.

In mid-2017, the appellate court upheld the Sharjah court’s verdict. The 13 Dubai entities have now challenged the appellate court’s order in the UAE’s  Supreme Court. The ball is now, therefore, in the CBI and ED’s court. It needs help from the UAE government, but is unlikely to get it in light of the court judgements.

This raises a further question: to what extent should Indian investigative agencies depend on the judgements of foreign courts? For instance, in the AgustaWestland case, even though an Italian appeals court cleared Guiseppe Orsi and Bruno Spagnolini of bribery charges, The Times of India quoted a CBI officer as saying:

“But this judgement (Italian appeals court) will not at all affect our investigations because our laws are different and our probe is completely independent,” the officer said.

The stand of UAE is also confusing. Instead of entrusting the case to investigative agencies, why did the UAE authorities opt for a memo based on the notes from lawyers and accountants?

If the CBI wants to pursue the case further, will the government allow it? Will UAE cooperate? Mehta, at present, is a citizen of St Kitts and Nevis in the Caribbean Islands and India does not have an extradition treaty with the island nation.

When The Wire last reported on Winsome Diamonds, the company emphasised that any allegations of money being siphoned off are “absolutely false and have no basis” and is “evident from the fact that in the banks’ case itself filed at DRT, Ahmedabad…”

The second development from Israel is also equally worrying. While the Indian media has not carried out much investigation, a Tel Aviv-based media house examined the issue quite thoroughly.

Diamond Intelligence Briefs (DIB), a magazine dedicated to the Diamond industry, is a bible for the industry traders. Chaim Even-Zohar, the erstwhile editor and publisher, had personally travelled to many countries and talked to Mehta before filing his stories.

In 2016, DIB carried an explosive story about Mehta’s alleged money laundering which was reported on by The Hindu’s Josy Joseph. Even-Zohar visited Dubai (our officials are yet visit to that country) and personally verified the financial strength of UAE companies which defaulted. He also talked to Winsome’s former finance director Ramesh Parikh.

“It had discovered round tripping and white smuggling of goods were being carried out. In essence simply the underlying invoices were processed in the Winsome office in Mumbai, but no shipment of goods were made,” Even-Zohar wrote.

Even-Zohar also reported that at least three of Mehta’s UAE-based suppliers were listed on the block global insurance policy of Su Raj Diamonds (later called Winsome) and then were taken off the block insurance policy shortly before they defaulted on the amount owed to Winsome/Forever. These revelations allegedly point towards the conclusion that the UAE companies were set up with the express purpose of diverting money taken from the banks.

The report also revealed that most of these UAE companies were allegedly one-room fronts that did not have the required staff or facilities to store diamonds and jewellery.

His investigation appeared in June 2016 in DIB, after which Winsome Diamonds threatened him with court cases.

Surprisingly, in its November 7, 2017 issue, DIB stated that it was misled into doing the story by one of the company’s directors. The issue also accused certain “vested interests” and the director of drawing DIB into “overall fraudulent and corporate rivalry schemes in mind boggling scenarios”.

Later that month, Even-Zohar not only resigned as editor and publisher of DIB but also sold the holding company to an Asian publishing house.

Where does this leave India and the the nearly Rs 7,000 crore in public money? A UAE court has given Winsome a clean chit and it appears that DIB sold out after issuing an embarrassing denial.

The next step, clearly, is with the CBI and ED. As the Nirav Modi scandal rages on, it will be interesting to see how it plays out.