While the Rs 55,000 crore earmarked for this year is technically the highest since the scheme's inception, it's the same when taking into account the supplementary allocations infused last year and the scheme's pending liabilities. 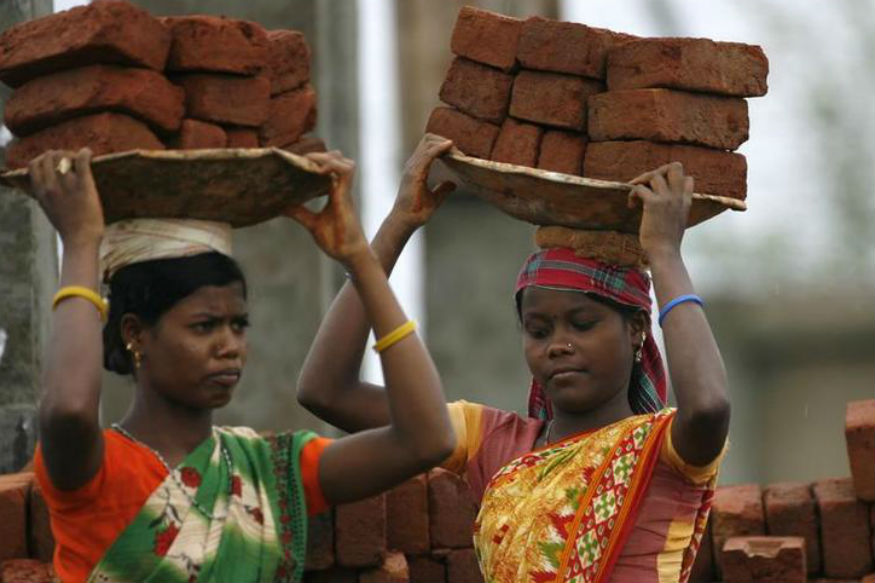 Women at women on an MGNREGS project. Photo: Reuters/Files

New Delhi: Perhaps for the first time since the launch of the Indian government’s largest rural job assurance scheme – the Mahatma Gandhi National Rural Employment Guarantee Scheme (MGNREGA) – the Budget speech of a Union finance minister didn’t mention the annual outlay the Centre has set aside for it.

Even by finance minister Arun Jaitley’s record, it is a first.

Last year, Jaitley claimed in his Budget speech that the Rs 48,000 crore he had assigned for the job guarantee scheme was a new “record”. It turned out to be just 1% more from that of the previous year, if you take into account the two supplementary allocations made during the year, taking the total amount to Rs 47,500. So effectively, in 2017-2018, he raised it only by Rs 500 crore.

The year before that, in the 2015-16 Budget speech too, Jaitley claimed it to be the highest ever. He told the Lok Sabha, “If the total amount (of Rs 38,000 crore) is spent, it will be the highest budget spend on MGNREGA.”

This year though – even if he skipped mentioning the budgetary allocation made by his government to MNREGA in his speech – a look at the annexures shows that this time, Jaitely has technically indeed made the highest-ever allocation to the demand-driven scheme based on the right to work.

However, a close look at the numbers point out the reason why Jaitley might have skipped mentioning about the MGNREGA outlay. Though Rs 48,000 crore was announced under GBS in 2016-17, this past January, it had to allocate Rs 7,000 crore of “Extra Budgetary Resources (EBR)” or supplementary allocation. This adds up to Rs 55,000 crore – establishing the point that the annual outlay is currently, after all, the same as the last year’s.

Nikhil Dey of the NREGA Sangharsh Morcha, a country-wide coalition of organisations and individuals, pointed out: “This may be technically the highest but if you total the amount allocated in the last financial year, it is nearly the same. In fact, the amount of Rs 7,000 crore released a few days ago is not enough to meet the already pending liability of Rs 11, 646 crore in wages to the workers. So we are anyway starting the new financial year with a deficit. Clearly then, this sum announced at the Budget today will not make up for the whole year. It will not be able to provide jobs to people on demand, which is a clearly violation of the Act.”

On December 6, NREGA Sangharsh Morcha submitted a pre-budget memorandum to the finance minister pointing out that the funds that have been allocated to the programme “are grossly inefficient, which leads to decreasing employment, delays in wages, and repeated violation of the law.” It pointed out that the Budget speeches have failed to mention that it has been running continuously in deficit and, therefore, the pending liabilities should first be cleared.

A press note released by the Morcha prior to the Budget stated that there should be an annual allocation in the range of Rs 80,000 crore to be able to minimally function as per its legal provisions. After the Budget was released, the group said in a statement that the inadequate budget for the MNGREGA, just like last year, is likely to lead to a number of problems: delays in wage payments, non-payment of minimum wages, low scale of work, etc.

Also read: Budget 2018: In An Election Year, it Doesn’t Pay to Be Seen as Too Business Friendly

A study conducted by Rajendran Narayanan from the Azim Premji University in Bangalore in collaboration with two independent researchers in December corroborated the need for more budgetary allocations for MGNREGA by pointing out that 80% of the funds allocated to the scheme had been utilised in just four months, leaving merely 20% for the rest of the year.

As many as eight states declared themselves drought hit in 2017. Add to it the estimates in media reports about demonetisation triggering some 4,00,000 job losses in the informal sector. Activists like Dey feel that with much strain on the rural economy now, there is all the more need for the government to be able to provide jobs to people through schemes like MGNREGA.

“However, I would also like to point out that this government, unlike before, is getting to recognise that the scheme is necessary for rural India and, therefore, it can’t completely marginalise it,” Dey added.