What Explains the Success of Damani's D-Mart, India's Walmart in the Making?

Radhakishan Damani's retail chain gives its customers less, makes more than its rivals and just had a spectacular trading debut. 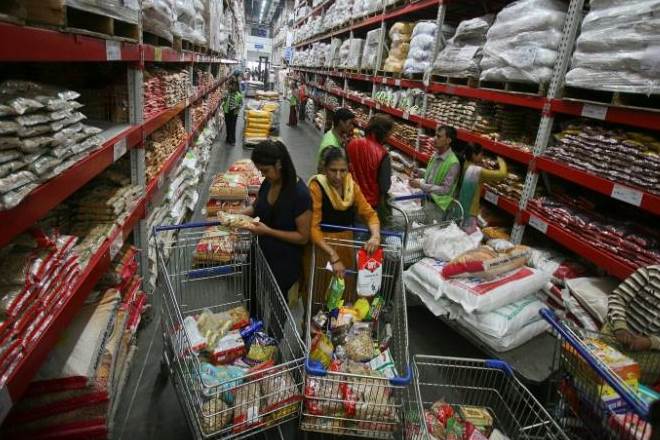 D-Mart had a spectacular debut on the Bombay Stock Exchange on Tuesday. Credit: Reuters

New Delhi: As surprising as it may sound, India’s most profitable supermarket isn’t backed by Ambani, Birla, Biyani or Goenka.

India’s Walmart in the making, as a number of analysts have called it, is Avenue Supermarkets Ltd, the parent company behind a chain of supermarkets and hypermarkets called D-Mart.

On Tuesday (March 21), D-Mart, owned by notoriously media-shy investor Radhakishan Damani, cleaned up spectacularly on Dalal Street, with its shares more than doubling in value after its initial public offering (IPO). The company’s shares were sold at Rs 299 apiece at the IPO and surged as much as 106% after listing at 604.4 on the Bombay Stock Exchange on Tuesday, making it not only the first retailer to list in a decade, but also perhaps the best IPO listing in recent Indian corporate history.

Its current market cap stands at a cool Rs 39,400 crore – which is higher than the combined market capitalisation of both Future Retail and Aditya Birla Fashion.

The math behind its business model is attractive to be sure, especially when compared to corporate rivals that attract a lot more publicity. For fiscal 2016, Kishore Biyani’s Future Retail put up a profit of Rs 14.55 crore on annual revenue of Rs 6,845 crore while RPG-owned Spencer’s Retail posted a Rs 168 crore loss on revenue of Rs 1881.31 crore.

In the same period, D-mart bagged profits of Rs 320 crore on the back of Rs 8,600 crore in revenue. Even though Reliance Retail, a far larger retailer that dabbles in everything from electronics to jewellery, posted similar profit in the 2016 fiscal (Rs 306 crore), it did so by bringing in revenue of Rs 18,399 crore – more than double D-mart’s revenue.

To be fair, Damani’s D-Mart is extremely cautious, some would say borderline paranoid, in the way it operates and the way it expands.

It’s strategy is markedly different from nearly every other Indian retailer. While other companies have expanded quickly into multiple segments with differentiated retail chains, D-Mart’s sales mix is largely limited to food and groceries. Categories like high-end electronics, jewellery and watches – which companies like Reliance have forayed into and which make up as much as 25% of Indian consumer spending – is something the company stays far away from.

The company also avoids the potentially lucrative but usually troublesome practice of creating private labels or brands, something retailers like Future Retail and Trent are currently doing in India. Damani thrives on low margins and, to a certain extent, D-mart is built around this philosophy. Industry executives at rival companies call it the “three-step business model”, very similar to that of Walmart.

“Start with low-cost products that consumers need on a daily basis and that you can sell for slightly below MRP. This allows you to rack up a great inventory turnover ratio. Then use that quick inventory turnover to negotiate better prices with wholesalers which in turn allows you to support your low prices,” a top retail executive, who declined to be identified, told The Wire.

Anything that doesn’t fall into this meticulous process is abandoned. Private labels and top-end products bring in higher margins but saddle companies with inevitably higher inventory turnover. Offering multiple brands of the same product also leads to similar outcomes, which is why the assortment of products and variety of brands that one finds at a D-Mart store is often limited when compared to Reliance Fresh or Big Bazaar.

Damani likes his stores to be more like a well-tuned assembly chain: where products are converted into sales as fast as possible. Because of this, it’s able to avoid the high-stakes, perennial discount game that other retailers often get trapped in. Customers who walk into a D-Mart store understand that they are getting a no-frills approach but also know that most food items and groceries on offer will be 6% to 12% cheaper than what they will find at other stores. In some cases, certain products will be 10% below MRP.

However, the company operates differently in other ways as well.

While competitors head to India’s rapidly-growing malls because that’s where consumer spending is highest, D-Mart hasn’t and doesn’t ever plan on opening a store in a mall.

As other retailers are experimenting with a wide range of formats and geographic locations, D-Mart sticks to what it knows best. It uses one of two formats of stores whose size is calculated based on location and shopper density.

The company is also extremely reluctant to expand geographically. Until 2014, it had stores only in four Indian states. Over the last three years, it has expanded into five more states but is still conspicuously absent in the NCR region and other high consumer spending states like Tamil Nadu. Analysts point out that it follows a principle of opening 75% of its new stories in existing states or markets and plans on staying true to this in the coming years.

This strategy pays off for the company. In its 15 years of operations, it has never closed, moved or shut down a store.

Much of the company’s focus, as well as comparisons to Walmart, stems from Damani’s decision to follow a store-ownership model. The company has spent over Rs 23 billion on acquiring land and buildings but either owns most of its stores or has them on a 30-year long-term lease. This is, in part, what has forced it to rack up debt of a little over Rs 1000 crore; a certain amount of its IPO proceeds have been allocated towards repaying this debt.

However, its ownership model crucially allows it to save on rental costs. A recent ‘Yes Securities’ analyst note points out that D-Mart’s rental costs are only 0.2% of total sales compared to 8% for Biyani’s Future Retail.

It may appear strange that while buzz is so strong around India’s e-commerce industry and companies like Flipkart and Snapdeal, the best-performing IPO in recent corporate history is a brick-and-mortar supermarket.

And yet, D-Mart’s stringent focus on profitability offers lessons to both physical and online retailers, both of which have stumbled in the last few years. After burning through billions in venture capital funding and thousands of layoffs, India’s e-commerce industry is finally growing up and shifting towards a focus on profitability. On similar lines, traditional brick-and-mortar retailers, which have burnt their hands in expanding too quickly and experimenting too rapidly, are slowly taking a reality check.

All this means that D-Mart’s future, while bright, is not without risk. The company’s success so far stems from its blinkered approach towards product categories and geographic location.

As D-Mart chief Neville Noronha put it last year, the company succeeds because it does “small things repeatedly and consistently”. Can it keep doing this, especially when its revenue growth in fiscal 2015 and 2016 was lower than the annual revenue growth seen in the preceding two years? As the company moves forward, its biggest competition will not only be keeping true to its business model but also staving off the threat posed by rivals that are slowly maturing and looking to take a bigger share of the retail pie.