The auditor's report raises concerning questions over its balance sheet and there is evidence to show its core business was effectively transferred to a separate but connected company before the insolvency process started.

New Delhi: Are the Narendra Modi government’s attempts at cleaning up India’s bad loans crisis – specifically the new bankruptcy law for the resolution of unpaid bank loans by companies – being gamed by promoters who might be using these new mechanisms to escape their repayment obligations?

Consider the case of Educomp Solutions (ESL), which was once a promising player in the private education space.

The Wire has examined documented evidence that shows how ESL started the effective transfer of its core business to other companies having strong links with the original promoter before taking the original corporate entity to bankruptcy court.

The flagship entity went to the National Company Law Tribunal (NCLT) for insolvency in May 2017. Only two companies finally submitted bids. Both bidders are old business partners of the original promoter. This, industry sources say, gives rise to suspicion that it may have been necessary to have friends buy out the auctioned entity because a genuine buyer could later discover balance sheet numbers that don’t represent real assets on the ground.

The above inference is clearly borne out by the statutory auditor’s report for ESL, which The Wire has accessed. Surprisingly, despite the statutory auditor (Haribhakti & Co. LLP) raising concerns over the balance sheet numbers, the NCLT auction proceedings appear to be going on as if nothing is out of the ordinary.

This broadly appears to be the story of Educomp, which over a decade ago was heralded as the poster boy for how private companies could make money in school education.

As the NCLT proceedings reach the final stage, the banks are staring at a loss of more than 87% of their total Rs 3,000 crore debt. The selected bidder, Ebix Inc, has quoted less than Rs 400 crore for ESL. The auditor’s report questions the role of company management and the banks.

The auditor’s report clearly states that the company’s financial statements are not true and correct. It doesn’t give a “true and fair view in conformity with the accounting principles generally accepted in India including the Indian accounting system, as of state of affairs (financial position) of the company as at March 31, 2017, its loss, its cash flows and changes in equity for the year ended on that date”.

Haribhakti & Co. LLP is the auditor. The report also red-flags a number of other concerns:

1) While evaluating impairment of investments of Rs 1,400 crore in ESL’s four subsidiaries, the management was of the view that ‘no provision of impairment is considered necessary.”

“However, in the absence of appropriate audit evidence …we are unable to comment upon appropriateness of carrying amount of these investments and possible impact of the same on loss for the year ended march 31, 2017 and investments,” the report notes

2) ESL has not recorded any provision against long outstanding trade receivables amounting to Rs 708 crore from ESSPL (Edu Smart Services Pvt Ltd, a subsidiary of ESL). It has not considered the diminution in value of its investments in ESSPL amounting to Rs 51 crore.

“Considering the fact that ESSPL has been incurring losses resulting in erosion of its net worth and initiation of insolvency proceedings against it (subsequent to March 31, 2017) we are unable to comment on recoverability of the said trade receivables, investment and amount recoverable,” it notes.

3) The report also points out that the ESL management says that receivables amounting Rs 314 crore are good and recoverable. However, “we are unable to comment on the recoverability of outstanding trade receivables”.

4) The report states that the management maintained bank accounts of the company that were not disclosed in the financial statement.

There are 21 such points mentioned by the auditor in report on financial statements that confirm to ‘adverse audit opinion’.

Between December 2015, when the Insolvency and Bankruptcy Code (IBC) was introduced in parliament and May 2017, when ESL filed for insolvency, it effectively shifted its ‘smart class business’ to another firm – Smart Class Educational Services Pvt Ltd (SESPL).

Divya Lal, a former COO of Educomp and a close confidante of Educomp’s promoter and chairman Shantanu Prakash, was made a director and shareholder in SEPSL. She was in ESL till July 2016.

The modus operandi was simple. Contracts of a large number of schools that were ‘smart class’ clients of Educomp were renewed under SEPSL either in part or full. Some of the schools were given incentives to sign contracts with SEPSL, according to a former employee of ESL who declined to be identified.

The Wire is in possession of an email dated October 26, 2016, from Rakesh Dhaiya, a senior vice president of ESL, to a director of a reputed Kolkata-based school. The subject of the letter is “Renewal of Smartclass Program…”

Interestingly, the Linkedin profile of Dhaiya shows that he was shifted to SEPSL in November, 2016 as a senior vice president.

In a letter dated March 20, 2017, which The Wire has accessed, an official of a Delhi-based school writes to the national head of SEPSL: “Mrs Usha, the resource person is always ready to aid teachers and make them familiar with the various Educomp modules and their uses. We are happy using the interactive white boards and the tools associated with it.”

In another letter to the national head of SEPSL, the principal of a Ranchi-based school writes, “That is why we are using Smart Class since 2010 and also renewed till 2021.”

It is to be noted that SEPSL was registered only in December 2014.

The Wire is in possession of 17 such letters that show the association between ESL and SEPSL, and point towards the former winding down its business and the latter gaining; an effective transfer of business from ESL to SEPSL.

Other important links between the two companies include:

1) The two companies operate from the same office. The Wire is in possession of a rent agreement between Educomp and SEPSL. Educomp has been given office space in Educomp Towers in Gurgaon on lease to SEPSL.

2) The Facebook page of Shantanu Prakash, Educomp’s promoter and chairman, shows him giving awards to school principals at SEPSL functions. On one of the pages, he writes that SEPSL is a proud partner of Educomp. When The Wire sent him questions on Friday, the posts were all removed and deleted.

3) In interviews with trade publications, Shantanu Prakash has been quoted as saying that he is a proud ‘chief mentor’ of SEPSL.

4) The annual returns of SESPL for FY’ 2016 contains an attached PDF document showing the names and percentage holding of shareholders. This document is signed by Divya Lal and prominently carries the logo of ESL. 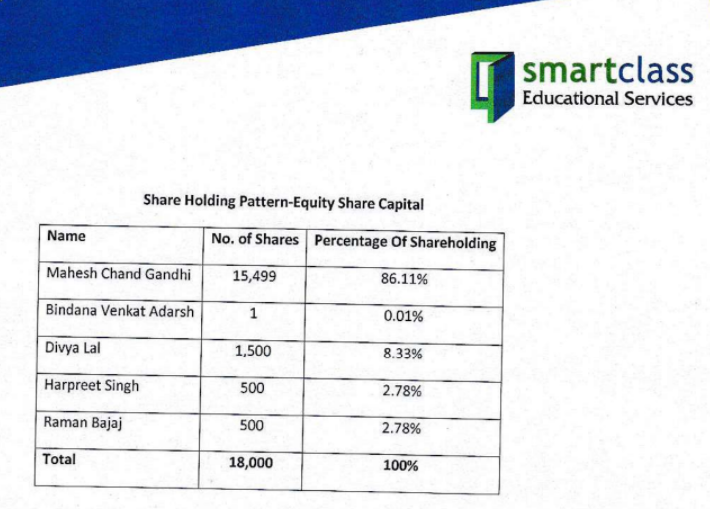 SESPl’s filings to the registrar of companies. Top right: Smart Class Educational Services along with the logo of ESL.

In a written reply to questions sent by The Wire, Lal said, “To the best of my knowledge SESPL does not use any Educomp logo in its ROC filing.”

“He (Shantanu Prakash) has no association with SESPL,” said Lal. She also said that SESPL is a licensee of Educomp’s digital content.

“You may please check with SESPL the rationale for using Educomp logo, in the event they are using it. I have no connection whatsoever with SESPL,” said Shantanu Prakash, original promoter of ESL.

Selling its entire equity in VMCL to KBESPL

In July, 2016, ESL entered into a share purchase agreement (SPA) for selling off its entire 67% equity in its only lucrative subsidiary, Vidya Mandir Classes Ltd (VMCL), to K B Educational Services Pvt. Ltd (KBESPL). The Wire is in possession of the SPA.

As per the SPA, the transaction was to be completed in two tranches. One, 25% of ESL shareholding was transferred immediately for Rs 16 crore. Two, KBESPL has call option to purchase the rest by March 31, 2019 for Rs 74 crore. A  “call option” simply means that KBESPL has the right but is not under any obligation to buy the remaining stake.

However, ESL booked it as a complete sale and removed it from the list of its subsidiaries. In its audited balance sheet though, VMCL still shows itself as a subsidiary of ESL.

There are many strange coincidences that raise questions over whether KBESPL and SEPSL were established to take control of Educomp’s businesses and assets:

2) Both have their registered offices in Mahipalpur Extension, Delhi.

Both of them have links and business relationships with ESL. Boundary Holdings is founded by Rajat Khare, who has served as an non-executive independent director at ESL.

“The purpose of the joint venture is to bid for education related government tenders wherein Ebix Software and Educomp complement their operating expertise and target large tenders, with Ebix Software India Limited also acting as the funding partner,” said Educomp Solutions in a release to Bombay Stock Exchange in July 2016.

On March 18, The Economic Times reported that Ebix Inc was the likely winner, having quoted a price of less than Rs 400 crore. This means that the banks would take a haircut of about 90%.

How was money drained out?

It is to be noted that these banks also gave loans to its subsidiary companies that have also gone to NCLT. The total exposure of banks in ESL is about Rs 3,000 crore. There is more exposure in group companies.

As per the company’s annual report for the year ended March 31, 2017, ESL had investments of Rs 1,700 crore in subsidiary companies. The top five are given below:

Between 2013 and 2017, the company created a provision to write off Rs 1,000 crore from its receivables and investments.

The banks were generous in their loan disbursement with other entities of Educomp group as well. For instance, Educomp Infrastructure and School Management Limited (‘EISML’) was granted a loan of more than Rs. 800 crores over the years even though it could not even touch total revenue figure of Rs 100 crores since inception.

A year-wise summary of revenue and borrowings of EISML is:

In response to The Wire’s queries, the official spokesperson of Axis Bank said, “As a matter of policy, Axis Bank does not comment on client-specific details. However, for good order, you may like to take up this matter with lead bank of the consortium.”

IDBI Bank, UBI, and SBI did not respond to questions sent by The Wire. SBI is the lead banker.

“The combination of internal and external factors required recalibration of the business plans of the company.  In this regard, it is pertinent to note that since the company was admitted to CDR process in 2013 , the management made several attempts to revive the company such as initially submitting a plan with 1200 crores of sustainable debt, a second plan and a TEV by PwC was conducted in 2016 which pegged the sustainable debt as 700 crores, however none of these plans were approved which finally led to the insolvency petition in May 2017.”

“Please also note that the company has been under CDR since 2013…to the best of my knowledge the actual principal amount is close to half of the current debt figure.”