For Two Years, Whistleblower Has Pursued MNC on PF Misappropriation, To No Avail

Abhishek Mishra was HR head of MW, a European company with interests in the infrastructure sector when he he noticed numerous irregularities. Officially, the Provident Fund authorities are investigating. But at a snail's pace. Abhishek Mishra, HR manager and whistleblower, hounded out of the German company he worked for when he complained about possible provident fund irregularities. Credit: Special Arrangement.

New Delhi: If the Nirav Modi scam is a reminder of the high price a country that ignores whistleblowers ends up paying, the fate of Abhishek Mishra suggests the Modi government has yet to fully learn its lessons.

Mishra is the former human resources head of MW High Tech Projects, a Hyderabad-based engineering and construction firm that is owned by the European company Stumpf Ag.

In 2016, he blew the whistle on the company’s attempt to misappropriate Provident Fund contributions, Employees State Insurance (ESI), the Building and Other Construction Workers (BOCW) Cess, proper wages and other compliance norms running into almost thousand crores of rupees.

Like most whistleblowers, he has had to face the punishing consequences that often follow – including being hounded out of his job and encountering difficulties in finding new employment.

What worries him the most, however, is that the evidence he gathered and presented to the authorities on the company’s alleged misdeeds – ranging from embezzlement of social security funds to tax evasion to violations of the Minimum Wages Act to the alleged underreporting of accidental deaths of workers at a company construction site – has still not led to any concrete action by the government.

“I have intimated the PMO about this three times already,” Mishra, who parted company with MW at the end of 2016, told The Wire. “Yet nobody seems to be willing to do anything.”

The company is, however, currently facing a probe by the Employees Provident Fund Organisation (EPFO) for its alleged misappropriation of employees’ PF contributions amounting to over Rs 500 crore.

“There are a lot of negative entries and there is no adequate narration. Supporting vouchers were also not enclosed,” the EPFO committee noted after hearing the representatives of the company management in connection with the ongoing inquiry in a recent meeting.

However, the PF office has repeatedly postponed taking action without clearly stating the reasons for the delay, leading Mishra and other former employees to fear the worst.

Mishra has currently filed documents at both the labour court and high court in Hyderabad accusing a number of senior executives of the company of being party to the statutory violations he says the company is guilty of, including  Dilip Nemchand Gada, CFO for India, Anil Chanana, Managing Director for India, Alexander Moray, Legal Counsel, Frank Lorenzetto – CEO and Benjamin Nomine – HR Head of MW International.

The details of the under-reporting of deaths and other alleged crimes have also been shared with MW group’s global management team.

Mishra says that when he confronted Lorenzetto in August 2016 about the extent of the company’s violations on the social security front and the death of workers at company work sites, he was told, “All you Indians are for sale. Name your price.” The Wire emailed Lorenzetto asking for his version of the conversation with Mishra but has received no reply.

So far, the EPFO has issued a public notice inviting affected workers to come forward and testify before it, but it is not clear what additional information it needs in order to take a final view on the company’s case.

1) “ The commission of enquiry was not informed about whereabouts of the vouchers and other related records. However officials of the company stated that they shall file the relevant records directly with the provident fund office before the end of the day”

Mishra, who joined the group in March 2016 as HR head, left the company after he refused to be party to what he said was illegal conduct. In particular, he says he refused to sign any document related to the PF issue. He has accused the company of resorting to bribery as a means of getting around its PF obligations. After resigning, he wrote to Nripendra Mishra, principal secretary to the prime minister, about the company’s activities that he says warrant urgent investigation and action.

Abhishek Mishra says the first inkling he got that all was not well within the company was when he was asked as HR head to take action against two employees whom MW had decided to make scapegoats of in a bribery case that had come to light at a government department. “The concern I raised was that if it was our contention that employees had paid a bribe, they had done so on behalf of the company and that it was our duty to report the matter to the concerned authorities,” Mishra told The Wire. “I also wanted management to investigate on whose instruction the bribe was paid. Who arranged bribe? Who were decision makers for paying bribes?”

Mishra alleges that MW High Tech Projects has evaded payment of taxes, dodged construction welfare cess, had not obtained proper labor license, and contributions from workers on account of ESI.

He alleges that the company’s mishandling of ESI funds perhaps amounts to almost as much as the PF evasion that is already being probed.

“The company ( MW High Tech Projects) did not file its balance sheets for several years to keep scope of change in accounts in case they are caught. Since I exposed this in this court, the company has filed balance sheets for all these years,” says the letter he sent to the PMO.

According to the whistleblower, former employees alerted him to misdeeds going far beyond the financial realm.

For example, several workers allegedly died when a building being constructed by the company for the Michelin manufacturing unit at SIPCOT Thervoy Kandigai industrial park near Chennai collapsed in 2014. Mishra alleges that the company reported just one death to the authorities, ensuring that the remaining bodies were disposed of.

“This was the last thing on which I objected and wanted to inform the authorities but I was severely threatened. After that, I left the company,” his letter said.

After this accident, the company’s managing director at the time “went underground” for 2-3 months, he alleges, though some executives were questioned by the police. The company shifted office from Chennai to Hyderabad after the mishap.

The whistleblower also has a video clip which supports his allegation that the company management did not report all deaths to the police and other concerned authorities. This meeting which was recorded was held at New Delhi.

The Wire could not independently verify the authenticity of this video, which Mishra says he has submitted to the appropriate investigative authorities.

In the video, the conversation goes as follows:

Executive:  “If somebody had killed anybody what you are alleging it, they killed it and we are trying to fix it.”

Executive: Which government authority? Should I put a loud speaker and start yelling at it? If people ask we are going to do that, we are following our own procedures.

In June 2017, the company sought a meeting with Mishra to “settle the disputes” with him, offering to send its executives to Delhi since Mishra had expressed apprehensions about his safety in Hyderabad. 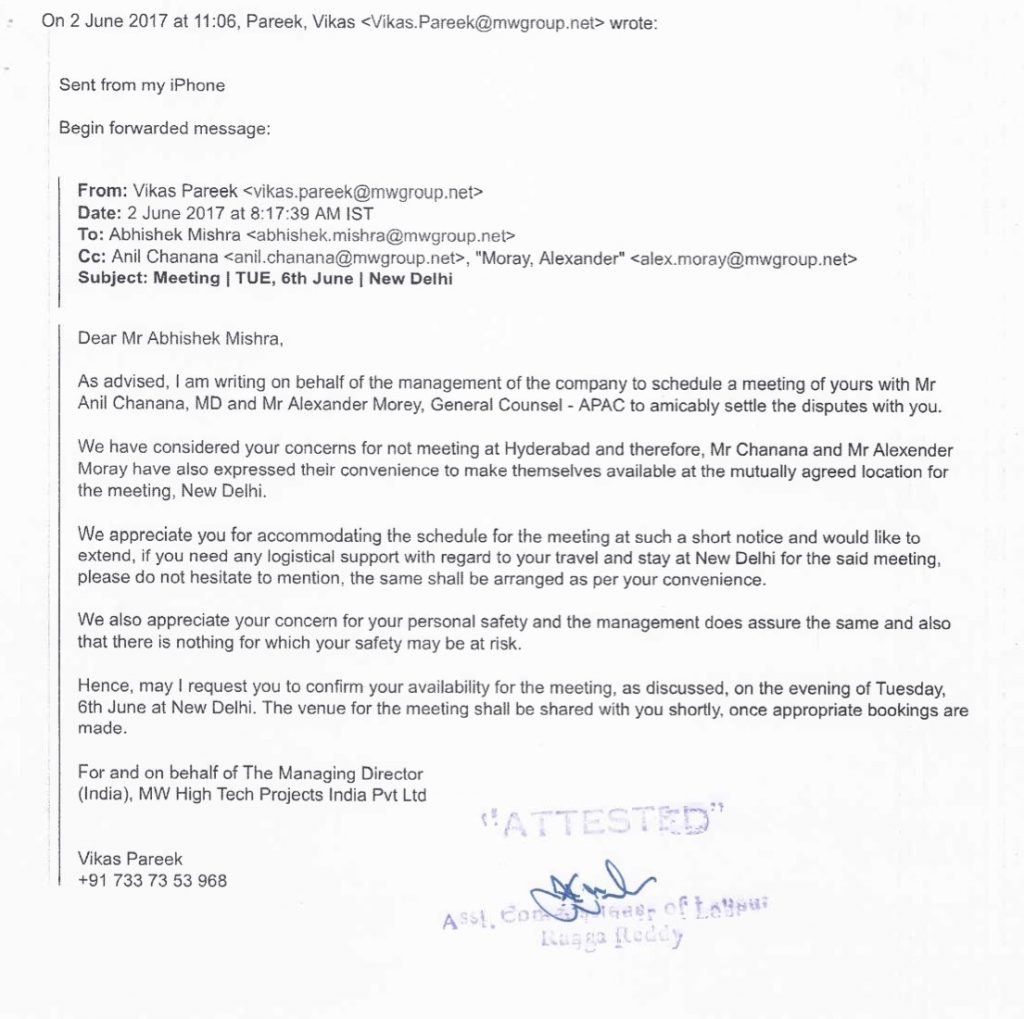 However, Mishra replied that there was nothing that needed settlement with him, rather the company needed to make a clean breast of all its alleged irregularities and illegalities with the authorities and courts. “You are mentioning in your email about settling disputes with me. I will suggest here an easy option for MW … Please immediately go and inform all the concerned authorities about all the misappropriations conducted by the MW group…”, he wrote. 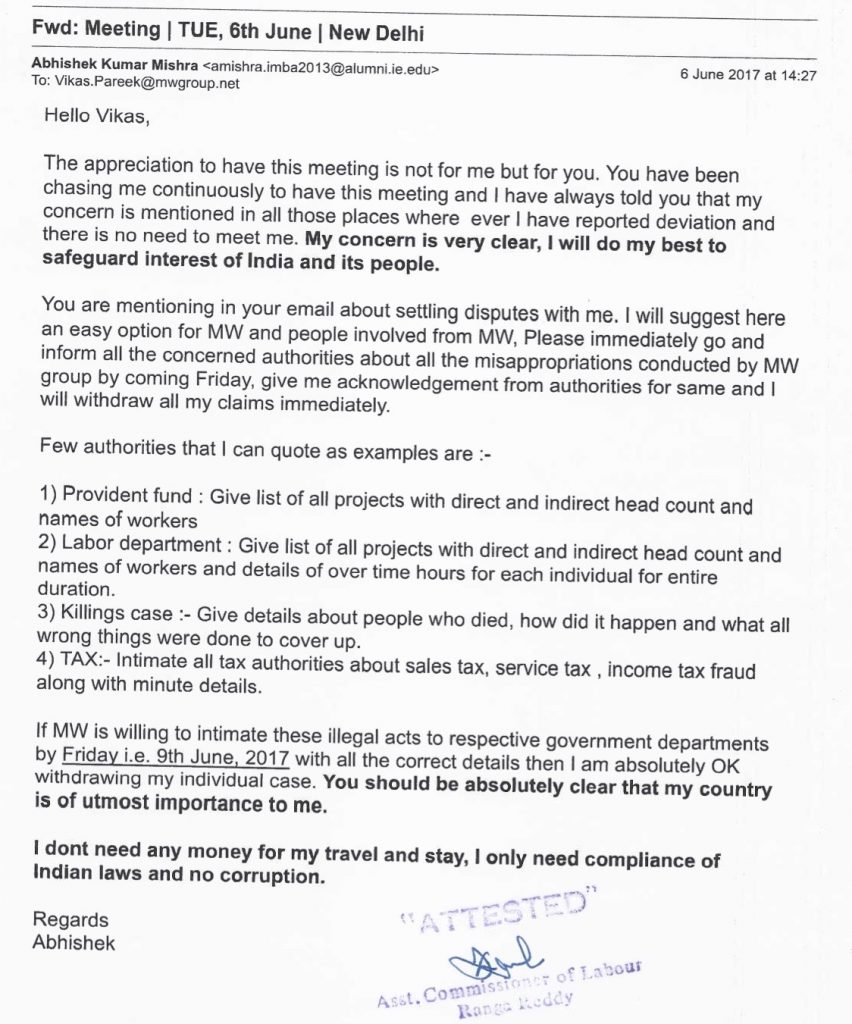 Abhishek Mishra’s reply to MW Tech’s offer to meet and “settle” his issues.

The Wire sent a questionnaire asking about the whistleblower’s allegations to MW High Tech and its parent company. This story will be updated if and when a response is received.