All companies for whom the investment limit is already applicable will have to bring their FDI exposure to the 26% level within a year’s time.

New Delhi: The Narendra Modi government on Friday evening released a set of clarifications that shed more light on its decision last year to impose a foreign direct investment (FDI) cap of 26% for digital media companies that upload or stream news and current affairs.

According to the clarification, the FDI cap will not only apply to news agencies – which gather, write and distribute news to digital media entities – but also aggregators, which collate content from various sources.

The government has said that the investment limit, which will be done through the government route –i.e. with government approval on a case-by-case basis – will apply to “Indian entities” that are “registered or located in India”.

All companies for whom this is already applicable will have to bring their FDI exposure to the 26% level within a year’s time.

The government also has said that the companies will have to adhere to a number of conditions that focus around ensuring operational control of the digital media company is squarely in the hands of Indian citizens.

According to the Department for Promotion of Industry and Internal Trade (DPIIT) clarification, all digital media companies which have 26% FDI will have to ensure that:

1) The majority of board directors are Indian citizens.

2) The CEO is an Indian citizen.

3) Any foreign personnel to be deployed by the investee entity – in any capacity, whether permanent employment or as a consultant – will be first required to obtain “security clearance” from the government. This clearance can be denied or withdrawn for “any reason whatsoever” – after which the services of the foreign employee must be terminated.

The process for seeking security clearance has not yet been specified, but these rules are similar to existing regulations on foreign investment in broadcast carriage services.

The move to “permit” up to 26% FDI under the “government route” for digital media companies that upload or stream news and current affairs was first announced back in August 2019.

At the time, it sparked surprise because it was a departure from existing policy. Until then, only Indian print media and news broadcast television companies had FDI caps – of 26% and 49% respectively. There had been no restrictions on foreign investors or entities running digital media ventures aimed at Indian consumers.

Watch: Why Is Modi Govt Afraid of Digital Media?

The DPIIT’s press note also sparked confusion amongst industry analysts and policy experts – mainly because it wasn’t clear whether this would apply to intermediaries like Facebook and Twitter, how existing companies that had more than 26% FDI would have to comply, and whether foreign news publications like Reuters or the New York Times would be covered under this regulation.

The clarifications released on Friday evening continue to raise a few questions.

It says the FDI cap of 26% applies to news aggregators – which it defines as any entity that collates content from various sources (including user-generated links) in one place. This definition, particularly the emphasis on ‘user-generated links’, would appear to apply to Facebook and Twitter, which have registered Indian entities that are presumably wholly owned by their American parent companies. 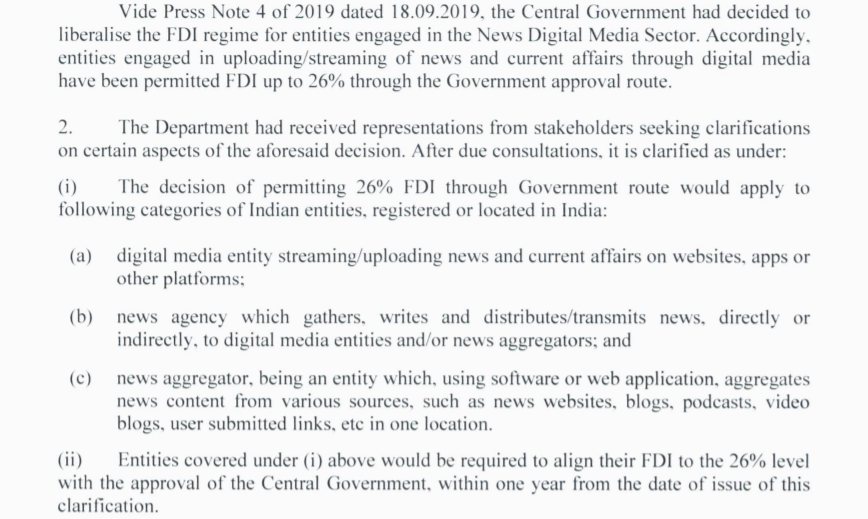 A screenshot from the DPIIT clarification released on Friday evening. A screenshot from the DPIIT clarification released on Friday evening.

After a stick, the carrot

A separate government press release issued on Friday evening by the information and broadcasting ministry said that digital media companies – presumably those that do apply for and receive FDI approval – will also be able to avail of certain benefits.

This includes PIB (press information bureau) accreditation for its journalists and also eligibility for digital advertisements through the Bureau of Outreach and Communication.

So far, of course, the government has not been giving PIB accreditation to digital media companies which are wholly Indian owned and do not have FDI, such as the The Wire.

As for the formation of self-regulating bodies, the government does not have the power to prevent any group of companies in India from forming an association so it is not clear what “benefits” the ministry is offering by saying digital media companies with FDI can also do so.