Fact Check: If Indira Had Carried Out Demonetisation, Would Modi Have Needed To?

Modi blamed the former prime minister, saying that if she had done what needed to be done, “the nation wouldn’t have been in this situation today”. How true is this? The Wire breaks it down. 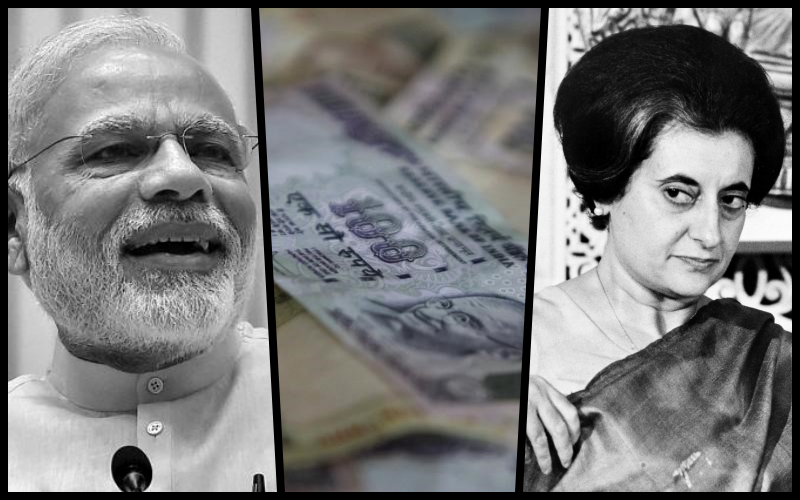 New Delhi: As the one-year anniversary of the Narendra Modi government’s controversial decision to demonetise high-value currency notes approaches, the prime minister has fallen back once again on a rather political justification.

At a poll rally in Himachal Pradesh, Modi defended demonetisation, saying that if former prime minister and Congress leader Indira Gandhi had carried out the note ban back in the 1970s, it would not have been necessary in 2016.

“Had she done note ban when needed, I would not have had to carry out this big task. For the Congress, it is never ‘dal se bada desh‘ (country bigger than party). For them only their party’s interest comes first,” he was reported as saying.

This isn’t the first time Modi justified demonetisation by using Indira’s hesitance to act on the Justice Wanchoo committee’s recommendations on black money despite former finance minister Y.B. Chavan’s backing of the report.

In December 2016, a month after demonetisation, at the BP’s winter parliamentary meeting, Modi blamed the former prime minister, saying that if she had done what needed to be done, “the nation wouldn’t have been in this situation today”.

How true is this? The Wire breaks it down.

Firstly, did Indira shy away carrying out demonetisation? This part appears to be true – the Wanchoo committee’s recommendations in the early 1970s included demonetisation as one of the measures to rein in black money. One account of Indira’s views on the subject comes from former bureaucrat Madhav Godbole’s book titled Unfinished Innings: Recollections and Reflections of a Civil Servant. In one chapter, Godbole recounts a meeting between Indira and Chavan, where the former prime minister turns down the former finance minister’s recommendation. However, as others have pointed out, Indira’s refusal should, in part at least, be seen in the context of India’s economic situation at the time, the 1971 Bangladesh war and the fact that the publicity given to the recommendations may have “resulted in black money operators getting rid of high-value currency notes.”

It’s the second part of Modi’s statement – that if Indira Gandhi had done what needed to be done, then the NDA government would not have needed to carry out demonetisation in 2016 – that doesn’t hold up.

It ignores the fact that just a few years later (on January 14, 1978), Morarji Desai and his finance minister H.M. Patel bit the demonetisation bullet by invalidating Rs 1,000, 5,000 and 10,000 notes. By the time Indira Gandhi returned to power in 1980 and till her assassination in 1984, the highest currency note in circulation was Rs 100.

Modi’s Himachal claim also ignores the fact that a National Institute of Public Finance and Policy-conducted study in the mid-1980s concluded that the 1978 demonetisation exercise (and an earlier one conducted in 1946) was largely a failure. This study, an excerpt of it shown below, has been cited in the past by economist Bibek Debroy (current chairperson of the Prime Minister’s Economic Advisory Council).

“…there are other good reasons to doubt the efficacy of this measure in combating black income generation. First, the measure is limited to inflicting penalties on those who hold their black wealth in the form of cash … There is every reason to believe that cash is not an important form for holding black wealth…Second, even for holders of cash, there exist avenues for converting high denomination notes into lower valued ones, at a discount, through intermediaries. Third, and perhaps most importantly, the measure does not address the underlying causes of black income generation. Hence, subsequent generation of such incomes can continue unabated…” – NIPFP study.

The failure of both demonetisation attempts appears in part because the presence of high-value currency notes was not a huge problem at the time: NIPFP also notes that in the 1946 demonetisation exercise, “about Rs 9 crore of high denomination notes, out of a stock of Rs 144 crore in circulation, were presented for conversion”. In 1978, the “value of unconverted high denomination notes was Rs 20 crore out of a circulation of Rs 145 crore.”

Therefore it’s not clear that if Indira had opted for demonetisation in 1971 she would have been any more successful.

On top of this, as The Wire has noted in the past, because the goals of the 1978 demonetisation exercise were not met and because of the declining purchasing power of the Indian rupee, the government (of Rajiv Gandhi) introduced Rs 500 notes in 1987. In 2001, the Vajpayee government re-introduced the Rs 1,000 note.

In fact, in a Lok Sabha debate in 1998, former finance minister Yashwant Sinha argued that if the 1978 demonetisation had any effect on black money generation, then the “black money circulation and quantum of black money in this country would not have gone up between 1978 and 1998.”

In conclusion, Modi is incorrect when he states that if Indira Gandhi had carried out the note ban “when needed”, he would not have had to “carry out this big task”.

Why? Firstly, because it was carried out either way a few years later in 1978 and was not a success.

Secondly, because the decision to introduce and re-introduce the Rs 500 and Rs 1,000 note (this one done during Vajpayee’s tenure) was taken by successive governments. It is the growth of these two notes that fuelled one of the Modi government’s pet peeves – increasing currency in circulation and the consequent cash-to-GDP ratio – which is what sparked the apparent need for demonetisation.