Did Demonetisation Bring About a Digital Transaction Revolution?

While it may have boosted certain modes of digital transactions, these are still just a drop in the bucket when compared to ground realities and the larger sea of retail payments. 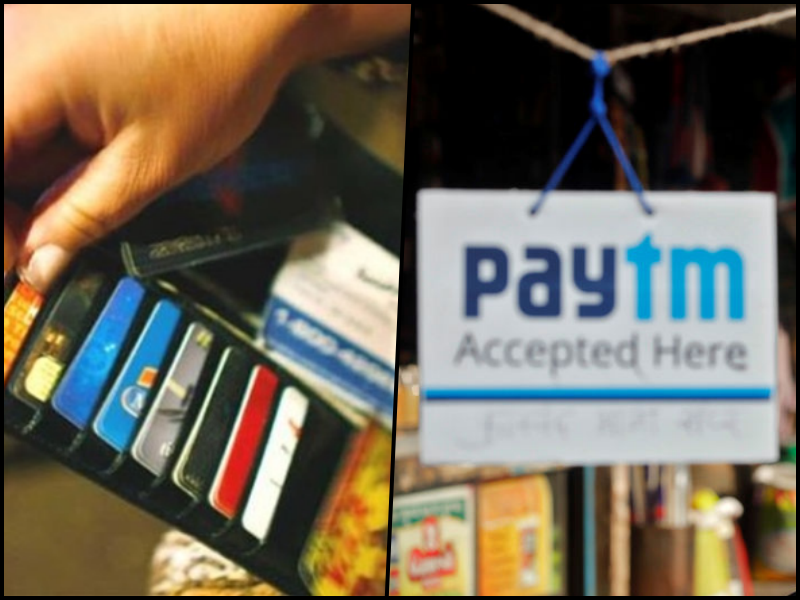 Looking at growth of certain digital transactions in a vacuum presents a misleading picture Credit: Reuters

Latest RBI data on reserve money shows that as on June 16, 2017,  currency in circulation (CIC) reached a figure of Rs 15.287 lakh crores. But this is still short (by 15%) of the CIC of Rs 17.977 lakh crores available on circulation as on November 4, 2016, the week prior to the announcement of demonetisation.

Although Prime Minister Narendra Modi asked for 50 days to restore the normalcy, even after seven months of demonetisation, currency shortage still remains unresolved. On social media, people still complain about empty ATMs and cash crunch in several parts of the country, though most mainstream media publications are not paying any attention to this.

Within a couple of weeks after the demonetisation, the narrative of the goals of the demonetisation dramatically shifted from the black money and fake currency to the virtues of digital economy. Consequent to this, India witnessed a publicity blitzkrieg that promoted digital transactions. Digi dhan melas and lucky dips were organised to encourage people to embrace the digital economy. We heard tall claims from the top ministers and bureaucrats that the digital transactions made a giant leap and that the present currency in circulation is more than enough to meet the demands of transactions needed by the nation.

Niti Aayog CEO Amitabh Kant made a very ambitious announcement that ATMs, credit and debit cards and POS machines will be redundant by 2020. He claimed that “they will all become redundant in India, and India will make this jump because every Indian will be doing his transaction just by using his thumb in thirty seconds”. Prime Minister, in his mann ki baat  address on March 26, 2017, exhorted people to embrace digital transactions so that the full year target could be reached in half the time.

The latest NPCI data shows that the Unified Payment Interface (UPI) transactions made a giant leapfrog from just 1,03,060 transactions in October, 2016 to 91,67,277 transactions in May 2017, recording a stupendous 89 times growth. Value-wise, UPI recorded a growth of Rs 0.49 billion to Rs 27.65 billion, more than 56 times growth during the same period.

See the graph below to see the phenomenal growth achieved by the UPI transactions, prepared based on NPCI data.

Modi, at a digi dhan mela at Talkatora Stadium in New Delhi on December 30, 2016, introduced BHIM (Bharat Interface for Money), which is a mobile app developed by NPCI, based on the UPI interface. BHIM too recorded growth in transactions from 17,17,696 transactions in January, 2017 to 39,75,750 transactions in May, 2017, which is almost 2.3 times growth. Amount-wise, BHIM recorded a growth from Rs 3.56 billion to Rs 13.07 billion during the same period.

The growth of UPI as well as BHIM (which is of course a subset of UPI) may create an impression that we made a giant leap in terms of digital transactions. But it is important to place this data next to ground realities.

At the same time, USSD transactions recorded in the month of May, 2017 was Rs 0.32 billion from 0.19 million transactions. Since this is minuscule, when compared even with UPI, no detailed comparisons are not made.

The transactions made under UPI can be revisited for further comparison, after undertaking a detailed analysis of the digital transactions happening under various heads. These categories are being used by RBI to take stock of the digital adoptions in the economy.

SIFMIs consists of almost 90% of the amount of cashless transactions while retail payments consist rest of the 10% of the cashless as per annual report of 2015-16. The number of transactions under SIFMIs are only 101.4 million, which is just 1.5% of all cashless transactions volume of 7046.6 million. “Table IX.1, Payment Systems Indicator – Annual Turnover” is reproduced from the RBI Annual Report for 2015-16 here. 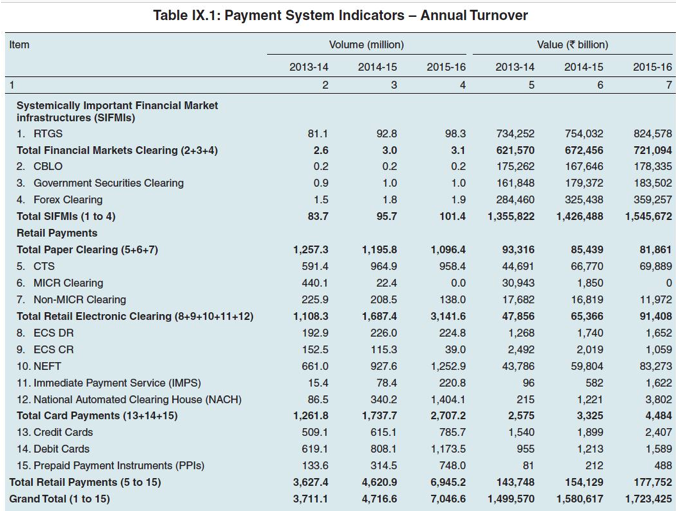 Based on the same yardsticks, which are being used by RBI, a detailed comparison of various components of the cashless transactions for last six years are done here. Our present area of interest is not the big ticket transactions (SIFMIs), but the big volume transactions fall under the ‘retail payments’, which is broadly divided into three major groups: ‘Paper Clearing’, ‘Retail Electronic Clearing’ and ‘Card Payments’.

This phenomenal change is due to a steady shift in the consumer behaviour as people adapt to digital transactions such as  NEFT, IMPS, NACH.

Also understand that BHIM is a subset of UPI, which is a subset of IMPS, coming under retail electronic clearing. Then ‘card payments’ consist of credit cards, debit cards and prepaid payment instruments (PPIs). Mobile wallets such as Paytm, MobiKwik, Oxigen and so on cme  under the head of PPIs. 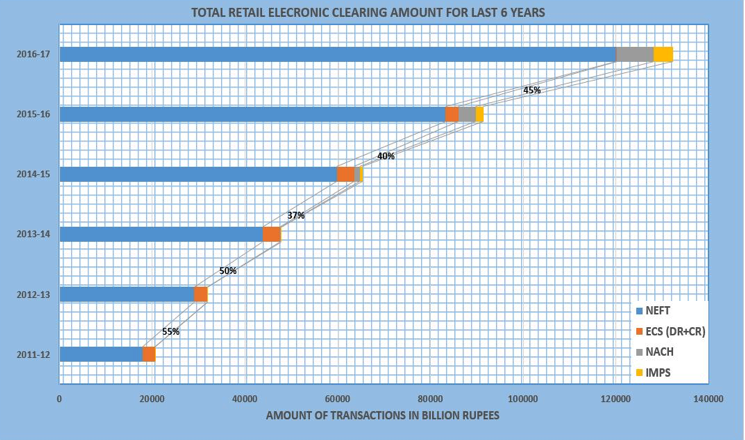 Consider how retail electronic clearing (NEFT, ECS, IMPS & NACH) has performed over the last six years. We can see from the above graph that between financial years 2011-12 & 2012-13, retail electronic clearing saw a substantial jump of 55%, while between FY 2015-16 & 2016-17, the same recorded only 45%. Although low base effect comes in, this clearly shows that the demonetisation was not able to push retail electronic payments to record-highs. It also failed to achieve the year-to-year jump seen during FY’ 2011-12 to 2013-14.

Card payments consists of credit cards, debit cards and PPIs. This is the one sector which seen a remarkable year-to-year growth of 65% during the last financial year. This growth is basically driven by a substantial jump in the debit card POS usage which shows a growth of 107%. Of course, demonetisation forced people to use their debit cards extensively for personal consumption expenses. But, we should remember that the total amount of Rs 7421 billion under the card payments is just over 5% of total retail payments of Rs 1,39,611 billion.

Finally, let us examine the larger picture. The chart below is largely self-explanatory, which shows that when we look at the overall scenario, we can see that the demonetisation, or chocking of India’s physical currency supply, has not able to create any big leap in the digital transactions. The biggest year to year growth in overall retail digital transaction was recorded between 2011-12 to 2012-13 (53%) and between 2012-13 to 2013-14 (49%), while the last financial year witnessed only a growth of 46% from the previous financial year despite currency crunch and a digital push.

This graph also shows that digital transactions are welcomed and embraced by many people as a choice of convenience for the last several years as technology has become an easy choice of payment for e-commerce as well as retail.

It is also interesting to analyse the total volume of transactions in retail payment sector too at this context, especially in the backdrop of the finance minister’s statement in his budget speech this year that, “A mission will be set up with a target of 2500 crore digital transactions for 2017-18 through UPI, USSD, Aadhaar Pay, IMPS and Debit Cards.”

The minister is setting an ambitious target on personal finance expenditure here, which is a subset of retail payment sector transactions. Last financial year, IMPS and card payments totally recorded 470.38 crore transactions while total retail sector digital transactions touched a figure of 964.69 crores. Now, let us see how the transaction volume changed over the years. Here, it is interesting to note that the transaction volume recorded its best year-to-year growth between 2014-15 to 2015-16 and not during the demonetisation period.

It is also interesting to look at data on cash withdrawals from ATMs to see whether any behavioural changes in the usage of cash is happened. Cash withdrawals, which dried up in November 2016 at Rs 850 billion, have seen a substantial jump in March 2017 to Rs 2,262 billion and to Rs 2,171 billion in April 2017. This should be compared with the pre-demonetisation months September 2016 & October 2016 where we witnessed withdrawals of Rs 2,223 billion & Rs 2,551 billion respectively. Though there is an overall cash crunch of around 20% in the economy, considering the year-to-year cash growth, people are merrily back to the use of cash as in the pre-demonetisation era.

Last financial year, we withdrew Rs 23,631 billion (Rs 23.631 lakh crores) cash from ATMs alone and the total retail digital transaction amount was Rs 139.611 lakh crores. Various studies by fintech MNCs put these figures at 25-30% of total transactions while the rest of the transactions are still happening using the cash at the retail and rural economy level. Please don’t confuse these figures with currency in circulation (CIC) figure of Rs 15.3 lakh crores, because this volume of cash is used multiple times for an umpteen number of transactions.

So even after the phenomenal growth, UPI at Rs 22.41 billion in April 2017 is a tiny fraction of IMPS transactions amounting to Rs 562 billion (just 4%). This is while IMPS itself is just 3% of total retail digital transaction. Similarly the growth of Paytm and other wallets, which are having total share of the miniscule PPI component, comes at just 1% of total retail electronic transactions. Both debit card and credit card usage are still around 4% of the retail pie.

James Wilson is a member of the Mullaperiyar Special Cell. He tweets @jamewils.