Uttar Pradesh recorded over Rs 100 crore sale on the first day since shops were reopened. In Delhi, most were happy to pay much less than black market rates. 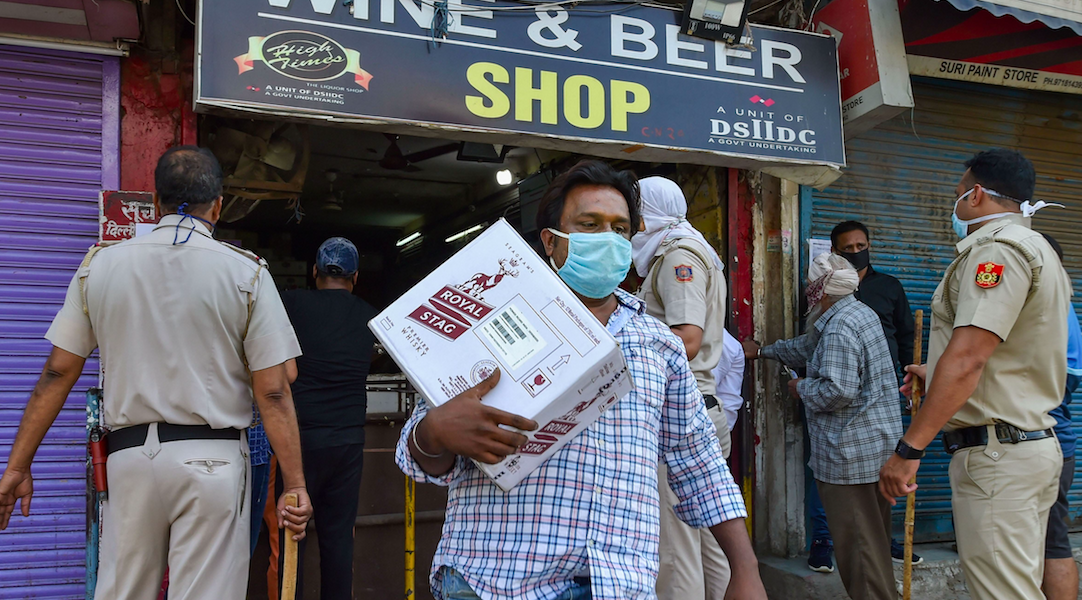 Police keep a watch as people buy liquor from a wine shop at Shiv Puri, amid ongoing COVID-19 lockdown in east Delhi, Tuesday, May 5, 2020. Wine shops in New Delhi are now open after authorities permitted the sale of liquor with certain restrictions. Photo: PTI

The Wire Staff
Business
Government
05/May/2020

New Delhi: The queues of people outside liquor shops in Ghaziabad and Noida in Uttar Pradesh, both of which share borders with Delhi, were especially long on Tuesday. The reason was primarily Delhi’s imposition of a 70% ‘special corona fee’ on liquor.

While it is not yet certain if the price differential would has led to cross-border smuggling, there has been a spurt in the volume of purchases made by people in these UP cities. In fact, to curb stocking of liquor by individuals and its subsequent passage into the grey market, the UP government on Tuesday afternoon restricted liquor sale to just one 750 ml bottle, or two halves (375 ml each), or three quarters (180 ml each) per person.

The queues for liquor extended to over a kilometre in many places. With very little else to do during the lockdown, many preferred to wait their turn in the queues.

UP records over Rs 100 crore sale on first day

The result has been a spurt in sales and revenue for the state government. On the first day itself, UP is, according to government officials, learnt to have grossed over Rs 100 crore in revenue from liquor sales.

However, estimates provided by sellers’ associations pegged the number much higher.

As Kanhaiya Lal of Lucknow Liquor Sellers’ Association, said, this was so because the percentage of sale of Indian Made Foreign Liquor and beer was higher than country liquor since much of the customer base who used to buy the latter has moved away or no longer has the money to make such purchases. “The sale would have been higher in villages, but there too, money may have been a constraint,” he said.

At many places in Noida and Ghaziabad, people spoke about how they wanted to stock up as the price of liquor has jumped in the black market due to the closure of the vends. Incidentally, the district authorities had last week spoken about conducting audits of the vends as they believed that some employees may have been involved in illegally taking out stock and selling them at high rates.

But with liquor shops reopening, it may now never be known if such illegal trade was indeed taking place.

Uttar Pradesh usually sells Rs 70-80 crore worth of liquor per day on average.

In Delhi, the imposition of the 70% corona cess by the Arvind Kejriwal-led Aam Aadmi Party government had no impact whatsoever on liquor sales and as on Tuesday, long queues were seen outside the 150 government liquor shops that have been allowed to start the sales.

People in several areas said they were shelling out up to four times the MRP on the bottles earlier and so did not mind spending extra on the cess for making their purchase.

While in most places the police and volunteers ensured that social distancing was maintained as people queued up outside the liquor shops, in many places, sale was stopped for some time when people violated the guidelines.

For Delhi too liquor sale has provided much needed revenue. While the city usually makes collections to the tune of Rs 3500 crore per month, in April this year the collections were less than a tenth of that, at around Rs 300 crores due to the lockdown.

Due to the stop of liquor sales alone, Delhi had lost around Rs 645 crore over the past month and a half. Overall, alcohol sales account for around 14% of the total revenue of the state.

This is the reason why looking at the long queues outside liquor shops, the government decided to impose a 70% cess. The city had set a revenue target of Rs 6279 crore from liquor sale for 2020-21. However, since the sale hours are restricted from 9 am to 6.30 pm and only 150 of the total 864 licensed shops would be involved in the sales, the officials are not expecting a huge revenue jump over what was budgeted.

Meanwhile, sale of liquor in Haryana, which surrounds Delhi on three sides, and which has the lowest excise duty on liquor in the entire region, is yet to begin.