The hotel industry has given a clarion call to the state government for life support to tide over this existential crisis. 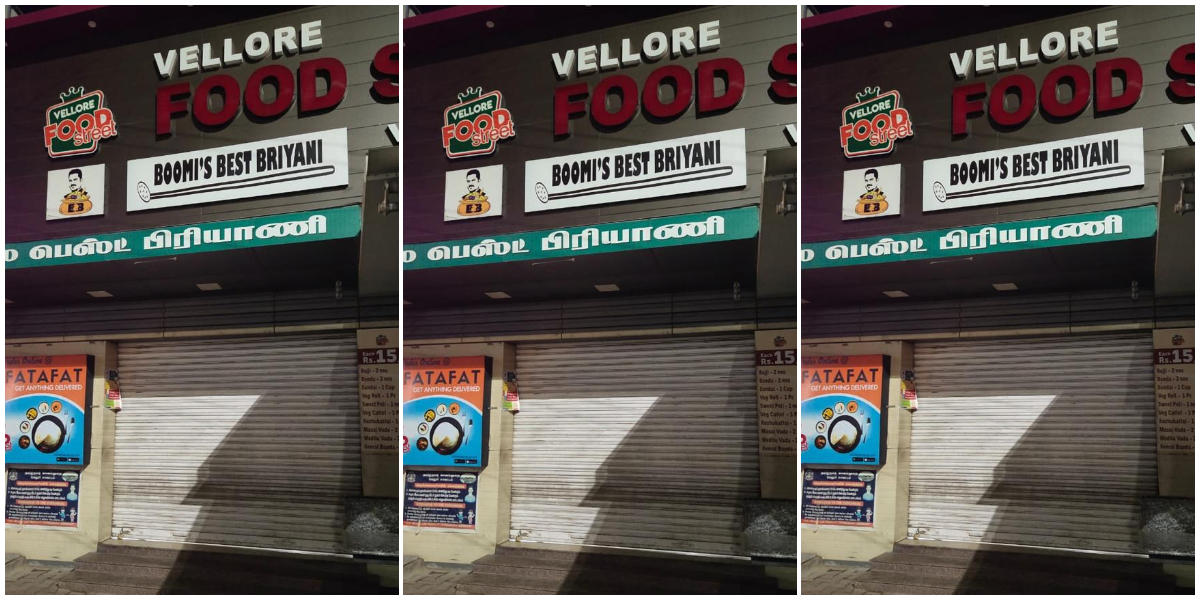 A hotel in Vellore that has closed down. Photo courtesy: P. Bhoominathan

Chennai: The second wave of COVID-19 has forced a tsunami of permanent closure of restaurants and hotels in Tamil Nadu, sinking under the burden of mortgage payments, dwindling footfalls, mounting restrictions and anticipation of a third wave. The hotel industry has given a clarion call to the state government for life support to tide over this existential crisis.

Rajkumar had weathered multiple literal storms during his 30+ years in the restaurant business. Through Cyclones Ockhi and Vardah, other business setbacks and crises, his restaurant has survived. He joined the hotel industry as a Class X student in Madurantakam town of Tamil Nadu, before moving to Chennai in 2003 and opening Hotel Aryabhavan at the Perungalathur bus stand. By 2020, he was the owner of another food outlet, Ganapathy Mess, as well.

When COVID-19 hit, it had an unprecedented impact, with the restaurateur having to shut down both the eateries. With a bank loan of Rs 10 lakh hovering over him, he sold his jewellery, put his car on sale and exhausted all savings. “We had just begun to recover from the first wave when the second hit us. I don’t know any other source of livelihood. The hotel business had been my way of life. I have never felt this helpless,” he said.

The majority of software professionals, construction workers, call taxi drivers in Perungalathur, a major public transport and IT hub, have left for their native places or are out of business. Regular customers of restaurants like Rajkumar’s, their unemployment or absence has had a domino effect on the hotels.

M. Venkadasubbu, president of the Tamil Nadu Hotels and Restaurants Association, predicts a glum future for the industry. Around 2,000 hotels have shut down forever, many others are on the brink of closure and at least 50,000 workers have been rendered jobless, he says.

The biggest grievance of hoteliers is that the state government had allowed textile showrooms and jewellery shops to reopen but hotels haven’t been given the nod for dine-ins as yet. “We cannot run restaurants on just parcel services, which account for just 10-15% of our business revenue. From this, online delivery partners like Swiggy and Zomato take a 20% cut of that income. There is no gain, only expenditure from our end. If other industries are opening up, dining services must be too. The blanket ban on this hardest-hit industry will make the situation worse,” he said.

The hotel industry came to a screeching halt with the announcement of the lockdown last year, but with the glimmer of hope that the economy will open up soon. A year later, many restaurant owners have depleted all their options to get by.

K.L. Kumar, president of the Madurai District Hotels Association said that around 1,000 small and medium hotels are currently up for resale across Madurai, Theni, Dindigul, Tirunelveli and Ramanathapuram.

“We kept trying to reinvent through the pandemic by introducing novel dishes like ‘face mask’ parottas to create awareness about safety protocols. But all we saw were more mandates and curfews imposed on us over time. We are ready to reopen with all norms in place to ensure safety, hygiene, social distancing, sanitisation and controlled entries,” said Kumar, who is also the owner of the chain of Temple City restaurants in Madurai. M. Santhosh, a real estate agent at MS group of companies in Hosur, pointed out that most hotels that are being sold are at the extreme ends of the budget spectrum: small hotels and five-star restaurants. They have been weighed down by lack of financial support and huge maintenance costs respectively. Eateries on the outskirts of the city and highways had to close down too, as the number of customers dropped due to curbs on transport. Food joints in shopping malls have closed down due to the high rents they pay, he added.

Even well-established restaurant chains like Adyar Ananda Bhavan had to shut five of their outlets. “The big chains have incurred losses in crores. The hotel industry has been under threat for over 18 months and will get back on track only when the public’s buying power is restored, with no silver lining in sight anytime soon,” said K.T. Srinivasa Raja, managing director of the Adyar Ananda Bhavan.

M. Ravi, president of the Chennai Hotels Association and the chairman of Namma Veedu Vasantha Bhavan group of hotels had folded two of his branches on a temporary basis. “With restaurant businesses sealed, an entire supply chain of dairy and farm produce slipped into limbo, leading to staggering amounts of food wastage. Around 10 lakh persons are directly or indirectly employed by the hotel industry, which includes hotel workers, farmers, those involved in poultry and fisheries, milk vendors, among others. Every other day, I get calls from anxious workers in Bihar waiting to come back. If I don’t call them back to work soon, they will turn to construction work or some other source of livelihood. We will lose highly trained and skilled labour,” he said.

Vellore based P. Boominathan, who ran four restaurants, has closed down all except his first venture, Kanna Saiva Unavagam. This outlet is also doing only 10% of its usual business, through delivery services.

When he had opened the fourth venture, Sai Sabari restaurant on the Chennai-Bengaluru highway in 2018, he had roped in Nepali workers and hotel management graduates from Rajasthan to dish out North Indian cuisine. The restaurateur has been fighting tooth and nail to hold on to his workforce by providing them accommodation and minimal payment through the pandemic, though there hasn’t been much work.

“Most of the labourers are either stuck in their hometowns or hanging around their workplace doing odd jobs and waiting to get reemployed. I have to pay the bank for a loan that I took and I don’t know how much longer I can do this. My restaurants have been shut for almost 16 months, except between November-January,” he said.

A plummeting industry calls for help

Even though COVID-19 norms were relaxed, many establishments had to be shut as operational costs, payment of salaries, bank interests and other expenses could not be met.

Earlier this month, the Reserve Bank of India had instructed banks to lend to contact-intensive sectors such as hotels, restaurants, among others by opening a Rs 15,000 crore liquidity window for the lenders. Borrowers with loans up to Rs 50 crore were eligible for loan restructuring, wherein they could delay payments without being classified as defaulters.

“Though the government had announced restructuring of loans, the burden of financial calamity continues to loom. India can learn from countries like the UK, which had included the hotel industry as part of their economic recovery programme,” said Ravi.

On June 19, the Chennai Hotels Association had approached the state government seeking consideration for EB charges to be paid in instalments instead of penalties for delayed payments, waiver of shop rent, GST penalties, trade license fee, sewerage and water charges, property tax, among other tariffs.

Sundar Singaram, director (operations) of South India Hotels and Restaurants Association, said that hotels in the southern zone were on a downward slide even before COVID-19 battered them, with an occupancy rate at 50%.

“A five-star hotel’s average room rate was down to Rs 4,500 per night in Chennai. Around 65% of expenditure in such hotels has to be incurred irrespective of occupancy rate, as their infrastructure is capitally intensive, which translates to high maintenance costs by default. Industries and corporate companies offer a solid base of occupancy and unless that picks up, hotels cannot have large pricing powers,” he said.

For the next few years, the hospitality industry faces a challenging time, he adds. “The business saw some respite during October-February, with marriage functions that took place with strict curtailments. Yet, the usual share of press meets, award functions and other such corporate events went off the window. Hotels were turned into COVID-19 wards and the industry offered its infrastructure and support staff at half the cost. Many big hotels have been put on auction by banks after the second wave, though there are no takers. Unless the government steps in to get the industry back on its feet, there will be increased loan delinquency, permanent closures and no place for tourists and others when they return from the pandemic,” Singaram said. 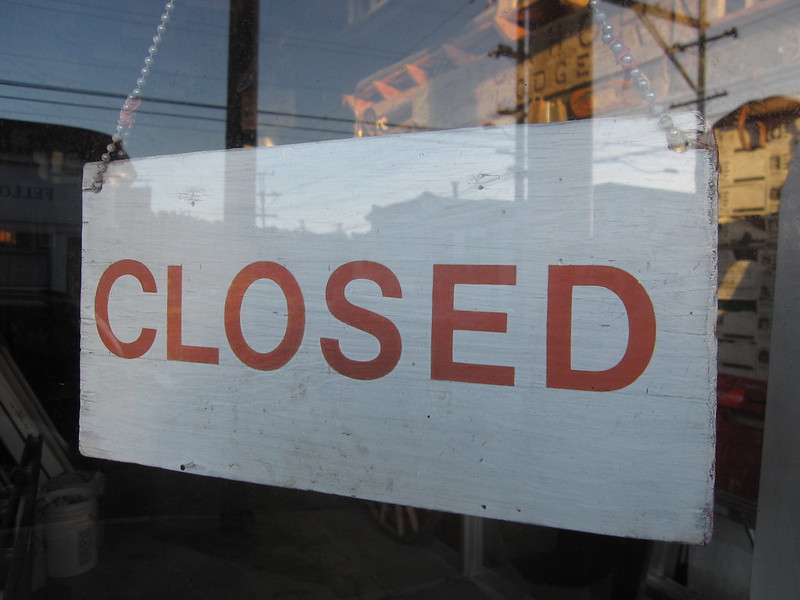 Insiders say government aid is necessary for the hospitality industry to get back on its feet. Photo: throgers/Flickr CC BY NC ND 2.0

Even as COVID-19 left a trail of destruction, global fast-food chains had the financial power to stay afloat as they were well capitalised. According to Ashutosh Bihani, the CEO of Dindigul Thalapakkatti, brands like KFC operated at 95% of their pre-COVID-19 capacity, primarily because of decisive factors like brand, cuisine and the suitability quotient for delivery requirements. The profile of a bulk of their customers – the young and working – also did not experience losses on a scale that other sections did.

Dindigul Thalapakatti, which has an older customer base, operated at 60% of its pre-COVID-19 numbers. “Even though indoor dining was shuttered, online orders did surge through the pandemic. The sector will slowly recover with the ebbing of the second wave, easing of restrictions and resurgent demands,” hopes Ashutosh.

Nalini Ravichandran is an independent journalist who has worked with the New Indian Express and Mail Today.