What Will Be the Spillover Effects of the Coronavirus on India Inc?

While there are significant supply chain concerns across sectors in the short-term, others see this as yet another distant opportunity to take some business away from China. A worker with sanitizing equipment crosses the road in front of a hospital in Yichang city of Hubei, the province hit hardest by the novel coronavirus outbreak, China February 12, 2020. Picture taken February 12, 2020. Photo: China Daily via Reuters

Chennai: Even as the business community across the globe is keeping its fingers crossed on the eventual impact of the coronavirus in China, a view is fast gaining ground that New Delhi has to be nimble-footed in not only blunting the virus’s effect on the country but also leveraging it to India’s advantage.

A sense of apprehension is quite palpable as industry leaders have spoken out about possible disruption to the broader supply chain.

In the last few days, major players in India’s pharma and mobile phones industries have noted how if the shutdown continues, local production and supply of everything from handsets to a few generic drugs may come to a halt.

“The bigger issue is that the supply chain constraint is also likely to hit India. It will take at least 2-3 months for the supply chain to get back to the normal mode and hence, there will be some amount of disruption in the global supply chain till that time,” said the head of an auto component major in Chennai, who did not want to be named.

“China is an integral part of the global supply chain, including for the automotive sector. The more advanced the technology, the more likely that those parts are being made in China. A lot of the players, including those in the passenger vehicles segment, are affected in the current scenario. While the Chinese government has said that factories can start functioning, the issue relates to third-party logistics services where the truck transporters typically use drivers who are migrants and the question is whether they will be allowed back immediately. A lot of the ports are fully blocked,” he continued.

Given the issues relating to China, of late there has been a focus on de-risking, including in the automotive and hi-tech industries. Some of the businesses in the mobile phone space have already gone to Vietnam. “India has to pitch with the large MNCs who have factories in China to get a part of their businesses to India,” he added.

Also read: Coronavirus Disrupted the Release of a Chinese Movie. Here’s How the Studio Responded.

Auto industry sources also pointed out that China has not been as cost competitive as in the past.

“For quite some time, global companies have been looking at options to build supply chain capabilities in India as an alternative to China. There is generally a move to look at de-risking. The fact that global companies are looking at non- Chinese options is an opportunity for India,” an auto industry source said.

“The other option that the global companies are looking at is creating a manufacturing hub in India by recreating what they did in China in the past and using India as a manufacturing export base,” said a ranking official of an auto component company.

“India is in a good position to take advantage of this, though the Chinese scale is huge. But there are some segments which are supply chain-based to create some kind of manufacturing hub. The government should look at job creation by expanding industries (even if MNCs create those jobs) within India. Trade-related competition from other countries should be viewed from the point of creating enough employment in the country. That is when India will grow faster,” the official said. 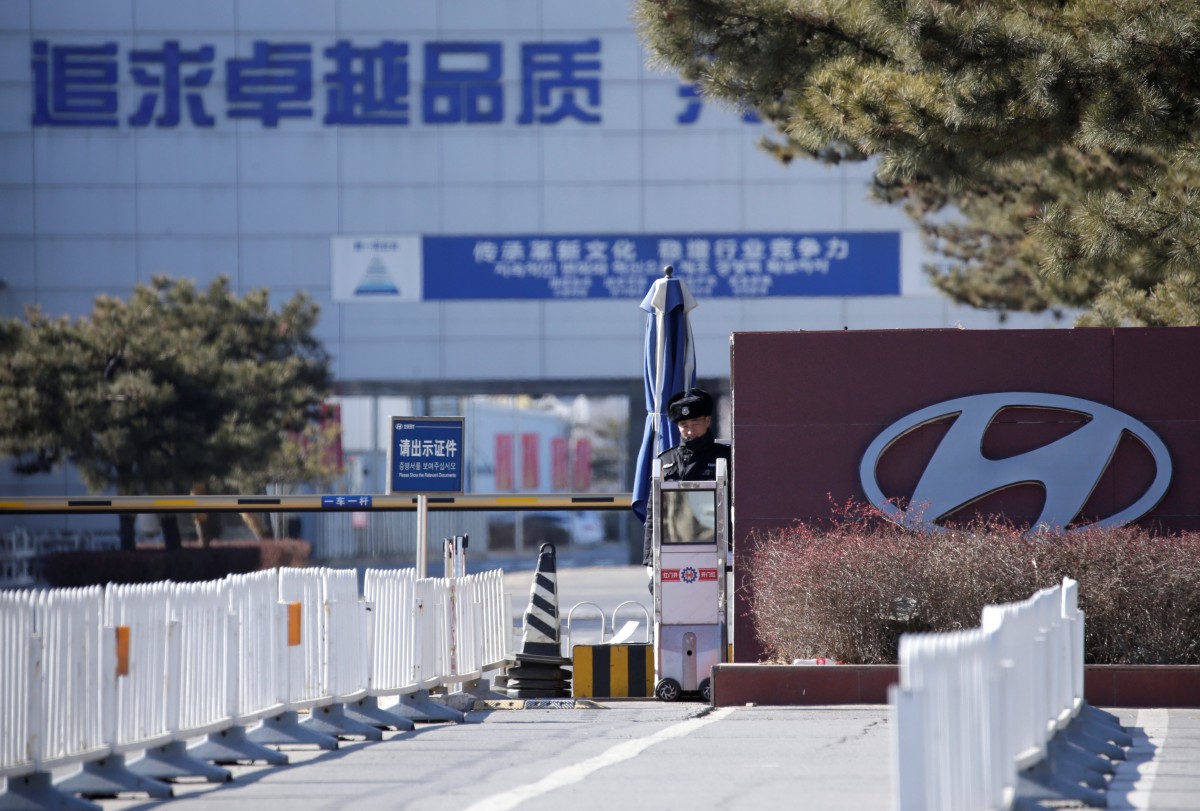 A security guard is seen at the main entrance of a plant of Hyundai Motor Co on the outskirts of Beijing, China January 25, 2019. Photo: Reuters/Jason Lee/Files

According to Pramodh Sharma, chairman of the Fifth Avenue Group, a sourcing management firm based out of Hong Kong, “The issue of coronavirus is one with serious global ramifications. Across the world businesses are being affected. China is the factory of the world, there are few businesses which do not get material from China either fully manufactured or as specialised parts’.’

He reckoned that “this can be a serious opportunity for India as the world can be made to see us as a serious alternative. Countries and business houses which were China-centric are now forced to look at risk mitigation and viable alternatives in the medium and long term,” he added.

There is a rider though. For India to use this opportunity, New Delhi will have to hasten infrastructure development.

There is a certain consensus that India never utilised opportunities that came in its way. This is indeed true even on the trade war between China and the US. “It is up to not just entrepreneurs but also the government to be proactive and move forward decisively . If that happens, then India has a giant opportunity which can truly spur our growth,” Sharma said.

With the right demographic, language advantage and the creativity, India has the ability to convert the present crisis into an opportunity.

Also read: Coronavirus: How Health and Politics Have Always Been Inextricably Linked in China

“In the long-term, India can certainly leverage this to its advantage in terms of getting to move more businesses to our country, provided we learn our lesson and invest in creating capacities to lap up such opportunities from such fall-outs, though one wishes such fall-outs happen not for reasons of viral scare,” said Srinivas Acharya, managing director of Sundaram Home Finance.

“Those Indian firms with plants in China have certainly suffered, but the impact may not be very high because of the ongoing slump here. As for those with plants in India, I wonder if we can fill in the capacity void created in China. We always knew that for one reason or the other, there could be flight of manufacturing bases from China, but we do not seem to have prepared ourselves for such an eventuality to capitalise on it. The resultant opportunities are being lapped up by other Southeast Asian countries,” he added.

All the same, the consensus view is that the onus is squarely on the government to seize the opportunity. The world is not simply waiting to get into India. There are plenty of others who are just readying the red carpet. It is high time the authorities realised this.