Another Budget, Another Year of Ignoring Binding Laws on Rights

The Budget has been a far too secretive and hidden exercise. Social sector expenditure and allocations related to policy announcements should be matters of open ongoing debate. 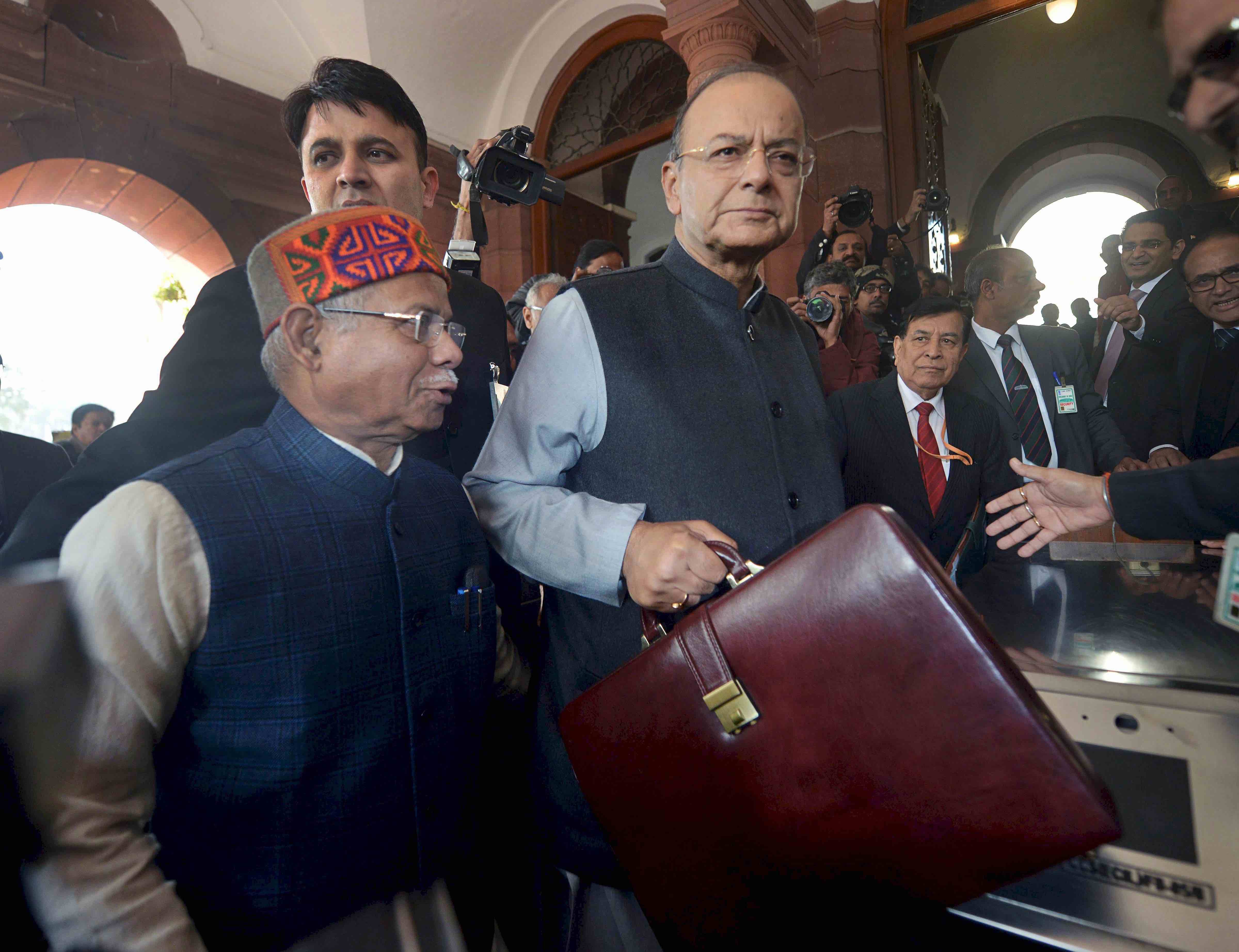 On December 20, 2017, a group of 60 eminent economists sent an open letter to the finance minister stating: “We are writing to draw your attention to two urgent priorities for the forthcoming budget.”

The first was to increase the central government’s social security pension amount under the National Social Assistance Programme (NSAP) from the ridiculously low Rs 200 per month to at least Rs 500 per month. This fell far short of the demand of half of minimum wages that civil society groups had been making, but seemed to be an extremely modest, obvious and minimal concern to address.

The other plea was to make sure that the maternity benefits as per the National Food Security Act (NFSA) norms should be immediately implemented. The deficient funding of Rs 2,700 crore in 2017-18, that the letter said was “barely a third of what was required, should be immediately raised to at least Rs 8,000 crore to give every eligible mother an entitlement of Rs 6,000 per child”. They ended their letter saying,  “We hope that these recommendations are useful.” The Budget shows that this government clearly found no use for the suggestions.

Not responding positively to this open plea from a cross-section of economists is an indication of many things at the same time. That the elderly poor and pregnant mothers are not a priority for this government is obvious on the face of it. However, there is more.

The 2018-19 Budget contains many announcements that demonstrate how the government is ignoring binding legal requirements, not consulting people and organisations in arriving at allocations based on the ground realities and is simply not willing to listen to or take into account suggestions from experts and affected people in the social sector.

This can have disastrous consequences, for the allocation as well as its potential effectiveness.

All rights-based legislations are facing a mounting challenge in claiming adequate resources, which should have been binding on the Budget, given that budgetary allocations must meet statutory provisions. The Mahatma Gandhi National Rural Employment Guarantee Act (MGNREGA), for instance, is a demand-driven law that should not be constrained by Budget allocations. For the last two years, under the watchful and disapproving eye of the Supreme Court, the Union government has starved the scheme of funds, knowing fully well that this leads to the violation of a law in terms of providing work on demand, providing wages on time and in paying compensation. Even wages are being depressed to fix an MGNREGA wage below the “minimum wage”, in a blatantly unconstitutional bid to save money.

This year also, the budget of Rs 55,000 crore for MGNREGA is the same as last year’s revised estimate. It has not taken into account inflation, pending liabilities that have already crossed Rs 5,000 crore this year and the liabilities of penalties to be paid for delayed payment of wages – overdue now for many years. The primary sufferers are some of the poorest and most vulnerable workers of rural India. The NFSA is being violated, as pointed out in the economists’ letter. The so-called “savings” from Aadhaar-based exclusion are not even being reallocated to add new beneficiaries (to maintain the numbers required under the law), but being used to reduce grain allocations.

The Right to Education Act is being reduced to an announcement of what should be, without the resources to carry out its legal mandate. Activists and educationists have persistently quoted the Kothari Commission recommendations for over 50 years to try and get allocations of 6% of GDP for the education sector. They might as well have been talking to a wall. The Union Budget allocates an amount equivalent to 0.45% of GDP this year. 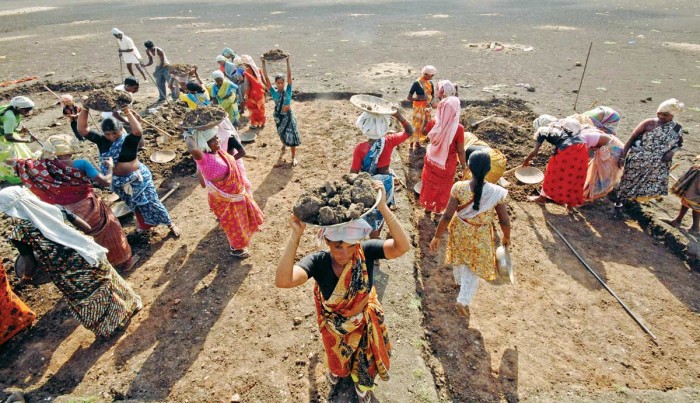 This year, too, the budget of Rs 55,000 crore for MGNREGA is the same as last year’s revised estimate. Credit: Reuters/Krishnendu Halder/Files

The health sector has been similarly neglected. The grand new health announcement comes with no allocation of resources. In any case, the nature of the announcement shows that the government has neither paid heed to the voices of health sector activists, nor learnt from experience that existing insurance schemes have so far had the impact of denying citizens quality healthcare and failed to reduce out-of-pocket expenditure. The consensus demand from all those who work in the public health sector – to strengthen the public health system – is not even made an issue of debate and deliberation. The government has decided to put its money and its faith in insurance companies and private hands.

Numerous petitions and suggestions from farmers’ groups have also been sidelined in this supposedly “farmer-centric budget”.  A crop insurance scheme from last year, which has given insurance companies at least one-third of the money in profits, has been allocated another Rs 4,000 crore. The announcement of 50% over input costs while calculating the minimum support price for all crops has not followed the recommendations of the M.S. Swaminathan Commission’s report in comprehensively calculating input costs (called C2), but followed a partial calculation of the base (A2) that leaves out input costs such as lease cost of land and minimum wages to family labour. Small and marginal farmers, and landless agriculturists have been almost completely ignored by the Budget.

Ignoring the input of common people is not unique to this government. Pre-budget consultations have become a routine where labour groups, farmers’ groups and social sector experts spend long hours preparing representations, which are politely accepted – only to be filed if not thrown away. There is no response from the finance ministry. The corporate sector receives very different treatment, and consultations with chambers of commerce and industry are serious discussions and negotiations. It is as if budgets are primarily about big business houses and their priorities.

The Budget has been a far too secretive and hidden exercise. While there might be certain matters of fiscal policy that need to be kept confidential till the Budget is announced, social sector expenditure and allocations related to policy announcements should be matters of open ongoing debate. In fact, the Budget should follow the pre-legislative consultative process, ignored by the government, mandated by the Ministry of Law in 2014, for all laws and subordinate legislation. The Budget should be considered an integral part of all legislation, as it determines the efficacy of most legislative measures. Building a pre-budget consultative policy for budgets would help in numerous ways: it would allow for people to give their suggestions and inputs, help the executive get feedback and ideas from a cross section of people, and enable them and the legislature to make more informed choices.

Also read: Why MSP at 1.5 Times Cost Is Another Empty Promise for Farmers

The need for better and deeper discussions around all aspects of the Budget was felt from the time of the constituent assembly. R.K. Sidhva, a parliamentarian, said to B.R. Ambedkar, “If in the new People’s Parliament of ours, we are not allowed full time for discussion of the budget, then. I submit in all humility, that it will be a mockery of democracy.”

It is time we introduced participation, transparency and true consultation in the budgetary process. In fact, the whole cycle of participatory budgeting and people’s auditing need to be introduced in an institutionalised and practical manner. If we do so, we will get authentic information and feedback from affected people and communities, and through their participation strengthen democratic processes. This exclusive, secretive, arbitrary process, with only lip service paid to consultation, has to be brought to an end. The right to information brought ordinary citizens into the domain of audits, articulating their role through the slogan “Humaara paisa, humaara hisaab (Our money, our accounts)”. It is not just the people’s right to check the accounts of expenditure that the slogan points to, but also of accountability related to every aspect of the planning and use of people’s money. After all, every single rupee in the Budget belongs to all of us.

The final irony of this year’s Budget was the ease with which the finance minister put in place a system for indexing the salaries and emoluments of parliamentarians to protect them from inflation and a system by which real revisions could be made every five years. This was a longstanding, unmet demand of the social sector. But social security pensioners will continue with their Rs 200 per month pension fixed in 2006. Maternity benefits have actually taken a cut, in both real and nominal terms. Similarly, inflation will also reduce entitlements for a range of other vulnerable groups in real terms. But in India’s budgeting exercise, some people are more equal than others. It is time we began to truly democratise the budgeting exercise.