Why 'You Cannot Build Democracy With a Gun'

Vijay Prashad's The Death of the Nation and the Future of the Arab Revolution provides a helpful interpretation of the processes that have led to the current state of the Arab world, but hazards little about the future prospects for the region. 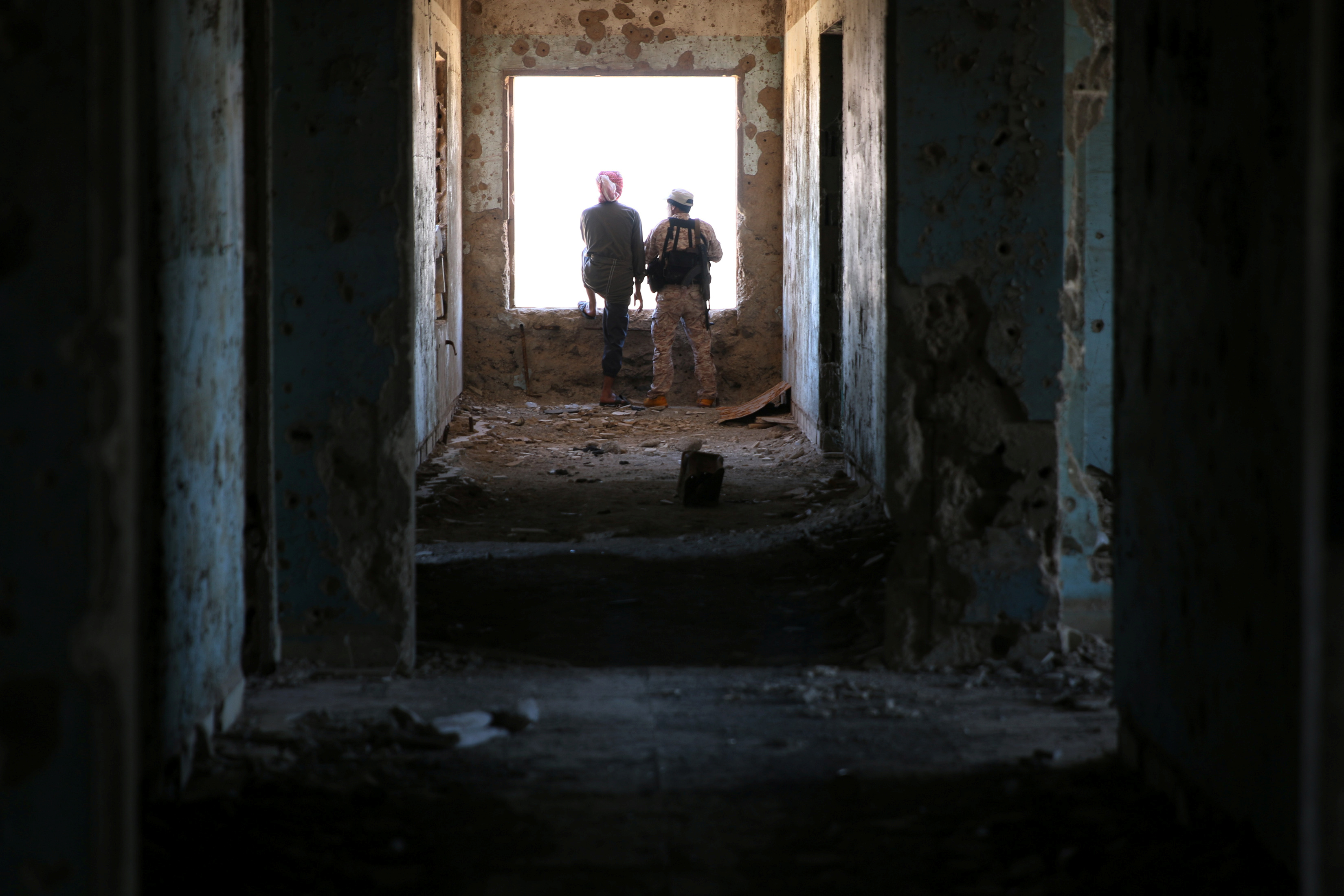 Residents of a Damascus suburb pick up the pieces after an airstrike. Credit: Bassam Khabieh, Reuters/Files

Vijay Prashad’s The Death of a Nation and the Future of the Arab Revolution tries to detect sparks of hope in the morass of the 21st century Arab world. Despite the author’s inclination to spot ideological markers that augur new beginnings and his conviction that the Arab Revolution “remains alive and well in the hearts of the Arab masses”, there is little to relieve the spectre of unremitting chaos in those unfortunate countries.

In the past fifteen years, four Arab nations – Iraq, Libya, Syria and Yemen – have been laid to waste as a consequence of theories of regime-change and humanitarian intervention, and a fifth –  Egypt – has relapsed to military rule belying the dreams spawned in Tahrir Square in that distant 2011 spring. Prashad, a professor of history and a veteran journalist, meticulously dissects the demise of Arab nationalism, de-mystifying the politics while humanising the tragedy.  The blame for the interminable tragedy, he places squarely on Western powers espousing neo-liberal ideas supported by misplaced policies of the Bretton Woods institutions. Vijay Prashad, The Death of a Nation and the Future of the Arab Revolution, Leftword, 2016

The spearheads of the Arab Spring, Tunisia and Egypt experienced, in Prashad’s eyes, bourgeois revolutions, where unpopular leaders were deposed through mass political action. “The tentacles of elite power remained intact,” however, and both countries today are not significantly different from what they were five years ago. While in Egypt a Western-backed military coup removed the elected Muslim Brotherhood government that had replaced Hosni Mubarak, Tunisia’s elected government was spared that fate by an organised working class whose presence in the streets precluded the sort of crackdown that took place in Egypt. The West allowed the old guard, in a pliable new form, to return in Egypt and Tunisia; but stopped at nothing short of complete destruction of the old Arab nationalists of Iraq, Libya and Syria, even while the Arab monarchies were granted freedom to pursue their own repressive agendas.

Prashad asserts that however real the Sunni-Shia divide is, it does not drive the political turmoil in the region. That narrative is authored by the geo-political rivalry between Iran and Saudi Arabia, spurred by the machinations of the West and Israel. There was no inherent antipathy between the sultans of Arabia and the king of Iran. It was the Iranian Revolution of 1979 that posed issues which the Saudi monarchy saw as an existential challenge to itself and as an insidious influence on its neighbourhood. The fact that a Muslim king had been replaced by an Islamic form of republicanism, with the introduction of an elected parliament and the establishment of modern institutions which even allowed women to participate. Early on, the US had decided that its own preservation lay in protecting the Arab monarchs and their oil wealth. For its own interests, the US government deepened the sectarian divide by fanning Saudi fears about Iran.

“Anti-Iran morphed rapidly into anti-Shia rhetoric and practice,” notes Prashad. “It is how Saudi proxies have operated in Syria and in Iraq and why Saudi Arabia began its endless war in Yemen.”

Wahabism would have been unthinkable in the diverse and secular Iraq that existed before the US invasion in 2003. The occupation forces dug into fissures between the Shia and Sunni sects to smother any chance of reconstruction of Iraqi nationalism. The US occupation provided oxygen to al-Qaeda and its ilk, who the locals began to refer to as “the Saudis of Iraq”. Nothing in the soil of Iraq, says Prashad, suggested incipient sectarian brutality; under US sponsorship it developed and bloomed fully. The global war on terror declared by the US and its allies “did not erase the terrorists; it manufactured them”. ISIS dates its origin to the anti-US insurgency in Iraq. The danger of sectarian wars, he points out “is that they have no endgame. They will not end with a utopian outcome. They can end only where life becomes evil.”

Prashad adds that in similar fashion “the West – and Israel – have been content to see Syria bleed and weaken. No outcome is desirable to them.” Since the Syrian government was incapable of fulfilling people’s aspirations, Arab money intervened – backed by the adventurism of Western powers – to play out their own respective agendas. From a political dispute, the Syrian stand-off plunged into a confounding war among a number of proxy armies from neighbouring countries, the al-Qaeda, ISIS, the Kurds and Assad’s forces, with overt and covert gimmicks of Russia, France and the US further poisoning the quagmire.

The Death of the Nation maintains that the lessons from Iraq were not learned: they were repeated in Libya and again, calamitously, in Syria and Yemen. Was there an alternative to regime-change that might have saved these countries from devastation and chaos? If the West and its allies had not chased total victory, could a negotiated settlement have been fashioned to forestall the resultant catastrophe? Bear in mind that bodies like the African Union had offered to mediate; and Saddam Hussein, on his capture, begged to negotiate; while [Muammar] Gaddafi, before he was lynched, pleaded that he be allowed to surrender. The Arab Revolutions were the outcome of the inter-play of three forces, contends Prashad. First, ‘political Islam’ which had originated as an Islamic component of the anti-colonial struggle. Exemplified in the Muslim Brotherhood, this was also a modernising influence and therefore, distinct from Wahabism. While it remained largely in the shadows, political Islam incubated in mosques everywhere, touching the lives of large numbers and developing a mass base and strong cadre. Second, the “youth bulge” in the Arab demographic presented a phalanx of under-employed, educated young people frustrated at the lack of economic and social opportunity and at the stultifying political atmosphere. The third strand – and in Prashad’s view the most significant – comprised of the organised working class and migrant residents of urban slums, who came together on everyday issues to demonstrate and strike, and to provide the spark for insurrection.

These forces combined to spur large sections of the population to rise against dispensations representing the security state on the one hand and neo-liberal policies on the other,  triggering a revolution against economic deprivation and political suffocation. Prashad views the Arab Revolution as a “civilisational” uprising, but he does not offer anything more than anecdotal basis to support his wishful assertion that the memory of the popular upsurge “makes an irreversible slip backward impossible”.

On his extensive travels, Prashad comes upon a cross-section of individuals dreaming of revitalised Arab nationalism “as a cord that binds people across the widened sectarian divides”: Iraqi women’s activist Yanar Mohammed challenges the Americans: “You cannot build democracy with a gun”; journalist and theatre person Hadi al-Mahdi laments: “I am sick of seeing our mothers beg in the streets”; a young al-Nusra militant in Lebanon confides: “If I had a job, I would not do jihad”; Omar Abdulaziz Hallaj, “a wise and distinguished architect from Aleppo” works quietly with others like him to build trust to bridge the sectarian divide and buttress Syrian diversity.

Looking at visuals of the apocalyptic devastation in Aleppo and other parts of the region, one despairs for Hallaj and other voices of reconciliation.  The Death of the Nation provides a helpful interpretation of the processes that have led to the present state of the Arab world but – unsurprisingly, for Prashad is no soothsayer – it hazards little about the future prospects for the region.

Govindan Nair is a civil servant who has retired to his books and seaside home after more than three decades in Uttar Pradesh, Delhi and overseas.