In this weekend's 'Verse Affairs', a look at a volume of poetry which crafts expression to accommodate its soaring ambitions. About halfway through Priya Sarukkai Chabria’s new anthology of poems, Calling Over Water (Poetrywala, Mumbai), we encounter three women — a saint (Joan of Arc), a concubine (Oharu), and a wife (Jijai, who was married to medieval saint Tukaram).

But the poet does not present them directly; they come to us through the medium of cinema.

We don’t see Joan but Renée Jeanne Falconetti, as the medieval French saint from the 1928 classic, The Passion of Joan of Arc.

Similarly, Oharu and Gauri are made alive on the page through descriptions of the actresses who played them on screen — Kinuyo Tanaka in The Life of Oharu (1952) and Gauri in Sant Tukaram (1936). 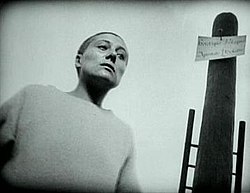 Renée Jeanne Falconetti as Joan of Arc in ‘The Passion of Joan of Arc’.

This cryptic poem, combing words and images, is shorter than many others in this collection — but lovers of poetry will immediately recognise the stamp of the poet in it.

Sarukkai Chabria is the author of two previous collections of poetry (Not Springtime Yet and Dialogue and Other Poems) as well as several collections of short fiction, non-fiction, and novels, including Clone (2018), a work of speculative fiction.

Her cross-genre explorations are not unknown and her interest in spiritual aspects of poetry is evidenced by her famous translation of the poetry of Andal, the eight-century Bhakti poet.

In “Prayer as Three Camera Movements” — the poem referenced in the previous paragraph — Sarukkai Chabria fuses together her interest in Bhakti and cinema. The camera movements, described painstakingly by her, is a sort of replication for the experience of darshana — to see or be seen by the deity — so essential to the Bhakti tradition as well as the western concept of passion.

The visual aspect is central to the experience of Sarukkai Chabria’s poetry. Take for instance, “Spring in Beijing’s Business District”: 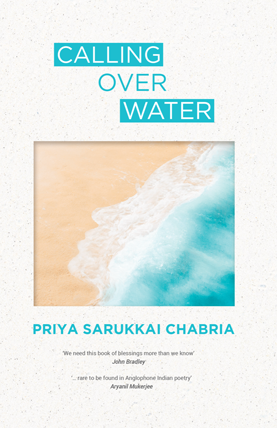 of power and anonymity.

endowed with the ageless

stand bare but for buds

in pink and white. Nothing moves.

The reader is pitchforked into a high-definition picture — one can see the glass in the sun, the spotless road, the trees and their flowers.

What one doesn’t get is smell. It is like watching a pungent dish being cooked on a smart TV.

Nature is not a source of comfort or escape but reinforces the distance — both physical and emotional — of this urban landscape at the heart of global economics and politics from a more primordial setting.

This book is, in many ways, a testimony to Sarukkai Chabria’s travels, near and far. There are two suites of poems about China, and more about central and south Asia, Europe, as well as different parts of India. Yet, my favourite of the lot is “Mountain Notebook: Drive to Prashar Temple”, which begins:

The higher one climbs

one and then another

The 50-odd poems in the book are carefully bookended by memories. If the travel to a mountain temple in Mandi, Himachal Pradesh, is one sort of memory, others such as — a telephone ringing — can also open up a vortex.

Also read: The Poet in the Republic

There is an archival instinct in some of the poems Sarukkai Chabria dedicates to her parents. The sense of bereavement, of loss, is made lush like a southern monsoon. In some poems, such as “Memory”, recollections intertwine:

Are empty chrysalises homes of memories that have fled? Do you
collect these? Whose memories
are you retaining? Yours or
someone else’s? Will anyone
retain memory of you?

In other poems, the art of writing poetry is indistinguishable from the act of excavating and preserving. “On Writing Poetry: Excavations & Predictions” is a compilation of quotations about poetry from ancient temples of Ellora and the tomb of Tutankhamen, to lost languages, medieval saints, and Agha Shahid Ali, and even an imagined future. Human memory or history is shot through with the thread of poetry. Sarukkai Chabria imagines an elevated position for herself in this tradition.

In Paradise Lost, John Milton seeks the blessing of the Muses because he intends his poem to be epic:

Invoke thy aid to my advent’rous Song,

That with no middle flight intends to soar

Things unattempted yet in Prose or Rhyme

With elaborate references, experiments with form, and dauntless exploration of emotions, Sarukkai Chabria displays her poetic ambition. For her the muses are, of course, saints — the ones of legend like Joan or Jijai or Andal, or real ones such as Falconetti or Gauri.