Unravelling the Encoded Cultural Messages of a Much Loved Entertainer 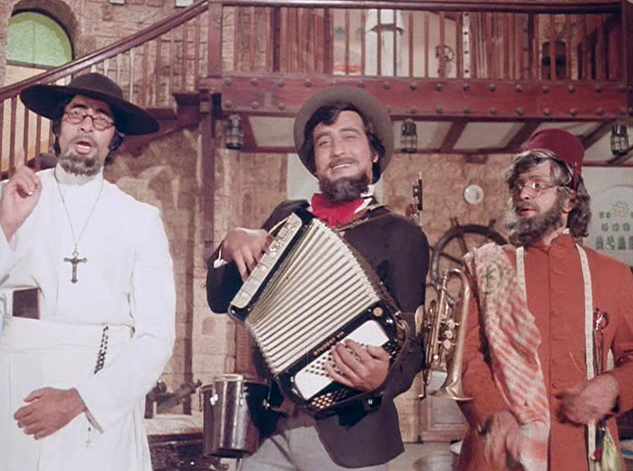 A still from that most masala of films, Amar Akbar Anthony

In the United States, the end of 2015 brought a new sort of season’s greeting. Alongside the cheerful Merry Christmases and Happy New Years, we noticed our Facebook feeds filling up with messages like this:

“Stood six hours in line to see the new Star Wars. Totally worth it!”

The three of us are Americans and cinephiles. We were kids in 1977. And we saw the first Star Wars movie when it first came out, just like every other member of our generation. But it’s a different film made in the same year that has an enduring claim on us. Our film preserves a sunny 1970s spirit, but it’s fresh with relevance to the present. It’s a cultural touchstone on the order of Star Wars, but while it’s also had its imitators over the years—including semi-remakes in several languages—it remains a proud franchise of one. It’s the movie that everyone in India saw in 1977. It has no equal, and it needs no sequel.

We have lost our hearts to Amar Akbar Anthony.

And we’ve just finished a book about it. When Indian friends discover that we’ve written an academic study of Manmohan Desai’s campy classic—the story of three brothers separated in childhood and their eventual triumphant reunion—they invariably express their love for the film. Then they reminisce about the first time they saw it, and laugh with incredulity that anyone—never mind three authors—would take it seriously as an object of study.

Amar Akbar Anthony is an extremely funny movie, and so at one level the response is appropriate. But yes, we are serious, and so is Harvard University Press. We have mined archival materials, translated source texts from Hindi, Urdu, and Sanskrit, and pored over every second of the film’s three-hour runtime more times than we can count to produce a scholarly work about one of the zaniest movies ever made.

One reason we were drawn to Amar Akbar Anthony is that its message of unity in diversity resonates personally. We are specialists in the study of Indian religions, and we first met as PhD students in India, engaged in very different research projects. The long conversations that grew out of our shared enthusiasm for the film showed us the complementarity of our approaches. Rather than Hindu, Muslim, and Christian, one of us is a philologist by training, one a historian, and one an ethnographer. Working through the three brothers’ story has helped us discover that nevertheless—as Amar declares during the movie’s climax—“Ham three-in-one hain!”

Another reason has to do with a challenge each of us sensed in the movie, a challenge encountered emotionally as well as professionally. To put it plainly, it was so over the top! The picture seemed anarchic, almost recklessly out of control, and yet there was no denying its appeal. Many of its images and lines stayed with us—although for every moment we found compelling, there was another that seemed baffling, but kept nagging at our academically trained minds. Would this manic mess of a movie ever come to make sense? Could we learn to laugh and cry in sync with its intended audience?

Much like the three brothers of the title, we often disagree, but we have nevertheless come together on some conclusions. The first conclusion is that—for all its absurd touches, its plots within plots, its freewheeling flouting of realism—Amar Akbar Anthony does indeed make sense. The second conclusion is that to understand it properly, a viewer of the film has to work through layers of symbolism, and this requires a certain depth of knowledge about Indian traditions—religious, literary, and cinematic.

Here’s an example. One way to read the movie is as a symbolic telling of the national story. While the three heroes profess different religions, they are the sons of a woman named Bharati—Mother India!—and they only get started on the way to mutual recognition when they come together in sacrifice to her (recall the famous blood transfusion scene). As a national allegory, the film is full of political implications. But—and this is a key point—its complex blend of comedy, irony, and pathos means there’s a lot of interpretive wiggle room, so viewers choose for themselves which parts to take seriously and which to laugh off. Everyone in India, it seems, loves Amar Akbar Anthony and knows the film is “about” national integration, at some level. But does that necessarily make it a secularist document, in the context of today’s politics? In fact, we argue that it’s perfectly possible to cite it in support of a “soft” Hindutva agenda.

Where we disagree is this: Who is the true hero of the movie? Is it Amar, Akbar, or Anthony? Each one of us has a different contender, and consequently we’ve structured our book around three chapters (in a kind of sibling rivalry), making each brother’s case in turn. (In a fourth chapter, the three offer competing perspectives on their mother, and then give Maa herself the final say.) Our book, like the film itself, contains internal contradictions; it is a work of multiple arguments. But there’s a firm premise throughout: Which character you recognise as the movie’s hero depends on which layer of symbolism you view it through.

Let’s return for a moment to Star Wars and its franchise. Symbolism is the secret of its success, or so conventional wisdom has it. Strip away the star cruisers and special effects, and the original film follows a basic quest narrative: hero emerges from unlikely origins, undergoes trials and transformations, and so on. In creating the story, George Lucas was guided by the theories of Joseph Campbell, who studied mythologies from around the globe and reduced them to a core formula. He called it the Hero’s Journey. Campbell thought it transcended cultural differences; in combination, its symbols mobilised a sort of archetypal “deep meaning” to achieve a truly universal appeal.

Present-day academics don’t tend to think much of Campbell’s ideas, but ever since Star Wars broke box-office records in 1977, Hollywood script gurus have embraced them. And indeed, while reviews of The Force Awakens have generally been full of praise, many critics have noted that the new film’s narrative is so close to that of the old that it’s a virtual retread. In fact, it’s been said that between Episode Seven and the other six entries, there’s not one that strays very far from the path of the Hero’s Journey. Recently Walt Disney Corporation, the series’ new owner, announced that it will extend production beyond the long-planned total of nine episodes. The scenario this evokes seems to belong to a more dystopian school of science fiction: An imperial dynasty of blockbusters reaching into the future, each one flashier and more loudly hyped than the last, each a rerun of the same old story.

To be sure, Bollywood is no stranger to the charge that it, too, repeatedly peddles the same story. Manmohan Desai, for example, released three other films along with Amar Akbar Anthony in 1977, and they all featured the same “lost and found” theme, and shared many of the same actors and plot points. But what we see in the masala genre of the 1970s—of which our favourite movie is the supreme example—is an effort to fit as many different kinds of stories as possible within the format of a single film. Far from serving up a one-size-fits-all hero, Desai’s opus gives us three for the price of one. And as a truly pluralist film for a pluralist society, it gives us at least three mythologies to go with them.

Is the Hindu police officer the hero? The defining theme of the story may well be Amar’s struggle, as the strong arm of the law, to uphold dharma in a city of chaos. But to see things in this way you need to recognise certain ideas the film borrows from the Ramayana (what’s A-M-A-R backwards?) and have some sense of scriptural teachings about dharma and brahmacharya. Remember the character’s strangely passionless connection with his girlfriend, and his hang-up about his gun, which he keeps buried in the ground for most of the movie? In our reading, Brahmanical teachings about self-restraint in matters of sex and violence hold the key to both puzzles.

Or is the hero Akbar, the tailor’s son who makes it big as a qawwal? He’s a lover, not a fighter; he resolves the story’s conflicts not with his fists, but with songs. To understand what he’s doing, it helps to have some familiarity with Sufi teachings about the world of appearances, and the clear insight claimed by poets in the Urdu tradition—the gift that enables them to see through the veil of illusion. It also helps to have watched several of the old-fashioned “Muslim socials” that Amar Akbar Anthony makes fun of.

Or is it Anthony, the tough guy with a heart of gold? It’s the conclusion many fans jump to, but some knowledge of religious symbolism helps clarify even this position—as does an appreciation of modern Indian history. It shouldn’t be missed, for example, that the character chooses the Christian festival of Easter as the moment for his rebirth. But is it merely a personal rebirth? Why is he dressed in the formal rig of an English gentleman? Tracing his singsong gibberish—“a sophisticated rhetorician intoxicated with . . . his own verbosity”—back to a speech by Benjamin Disraeli, the Victorian prime minister and arch-imperialist, helps us make the case that when Anthony Gonsalves hatches himself out of an egg, he’s asserting modern India’s assimilation of—and mastery over—its colonial past.

And don’t even get us started on how the blind mother figure is encoded as a Hindu goddess. Or on the diversity of symbols packed into the Sai Baba miracle scene. Or the heroes’ girlfriends . . . or the villains!

To build a career on the study of a culture not your own by birth is to pledge yourself to a powerful and mysterious attraction. For each of us, at points in our studies, Hindi cinema has stood in for the fascinating but frustratingly elusive character of Indian culture as a whole. And in this regard, Amar Akbar Anthony has seemed to us the Hindi film par excellence. To have reached the point where we truly “get” Amar Akbar Anthony—that, we hope, would be to have gotten something special about India itself.