What 'Too Many Men, Too Few Women' Can Lead To

A new book edited by Ravinder Kaur examines the consequences of gender imbalance in India and China. 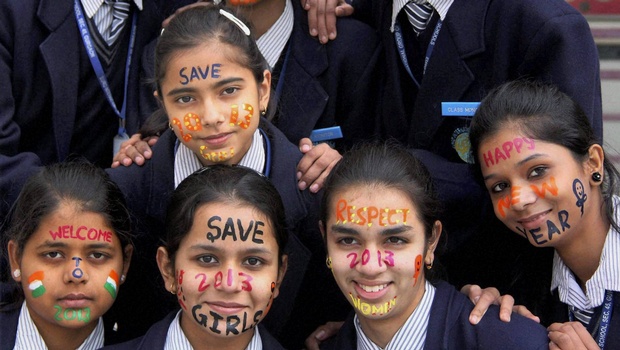 School girls welcoming the new year 2013 with a message 'save girls' in Gurgaon. Credit: PTI/Files

Too Many Men, Too Few Women, the title of the book edited by Ravinder Kaur is a punch in the mouth. The problems associated by gender imbalances in India and China have never been properly understood. Whether due to China’s One Child policy, or the misogyny (often coyly referred to as “son preference”) displayed in much of Indian society, we are at a difficult inflection point. In the introduction, Kaur refers to calculations that indicate that during the period 2020-80 about 32 million men in China will be “surplus”, in India that number is 40 million. To give a comparison, the total number of soldiers deployed by all the militaries in the world is about 65 million. This is equivalent to these “surplus” men, who may never marry, never have a “normal life”.

Unsurprisingly there is great fear of what violence this may unleash. Kaur introduces us to how this conversation is unfolding.

The discussion on the ‘dangers’ of surplus men was set off by two political scientists, Valerie Hudson and Andrea M. den Boer, in an alarmist paper, ‘A Surplus of Men, A Deficit of Peace: Security and Sex Ratios in Asia’s Largest States’, published in 2002 in the journal, International Security. They later expanded the paper into a book, Bare Branches: Security Implications of Asia’s Surplus Male Population (2004). The paper and the book raised the question of the effects of extreme gender discrimination on national and international security, arguing that ‘High sex ratio societies simply have a different security calculus’ (Hudson and den Boer 2002: 37). They ask, ‘What are the likely domestic, regional, and perhaps even international repercussions if their growth [of young unattached men] is left unchecked? (Hudson and den Boer 2004: 229). Devoting considerable space to documenting links across history between surplus males and rebellions, rise in crime and general social disorder, they make two specific predictions about China and India. They predict that China is likely to use its surplus males to ‘suppress violence at home and export it abroad through colonisation and war’, while India, as an ethnically heterogeneous society, may find itself engaged in higher levels of inter-community strife and conflict within the subcontinent (ibid.: 202). Emphasising that their predictions cannot be precise, they maintain that significant numbers of unmarried men could have an ‘unmistakable aggravating and amplifying effect’ on general law and order (Hudson and den Boer 2002: 37). They urged the Indian and Chinese governments to pursue policies that take note of the possible consequences of the gender imbalance, while alerting other governments to include this unique new factor in their thinking on security. Ravinder Kaur (ed.), Too Many Men, Too Few Women: Social Consequences of Gender Imbalance in India and China, Orient Blackswan, 2016

While such predictions may seem far-fetched with little evidence on the ground, the authors’ main proposition — that an excess of males is in general disruptive of society and may put women at greater danger — has found some support in a few academic studies. Thus, Edlund et al. (2007) hypothesise that increasingly, male sex ratios have contributed to the rise in criminality in China, doubling crime over two decades. Based on annual province-level data for the period 1988–2004, they find that a 1% t increase in the sex ratio raised violent and property crime rates by 3.8%, and suggest that ‘the sex imbalance may account for up to one-sixth of the overall rise in crime’. Based on data from China’s Law Yearbook for 2001, they state that ‘90% of all arrestees in 2000 were men; and the overwhelming majority (70%) of perpetrators of violent and property crimes in China were between 16 and 25 years old’ (2007: 1–2). Zhang (2010) links the rising incidence of rape and sexual harassment in China to the scarcity of women. Hesketh et al. (2011), however, argue that as yet, there is little evidence for the hypothesis that low-status, unmarried males will band together to become a threat to social order on a wide scale in China. Their research shows that while such men do indeed have low self-esteem and are inclined to depression, there is no evidence that they are prone to aggression or violence.

Yet many scholars in both India and China assert that there is a likely link between the increasingly masculine sex ratio and the growing incidence of violence of all sorts, especially against women. Zhang states that in China, there is a rising incidence of rape and sexual harassment, and that the scarcity of women is unlikely to enhance their position in society (2010: 38). She argues that due to the increased risk of gender-based violence against women, the rising demand for sex work, and the development of trafficking networks, women will be at greater risk. Discussing the shortage of brides, she says, ‘Bare branches [unmarried men] in rich provinces can buy brides or sexual services from women from poorer provinces such as Yunnan and Guangxi’ (ibid.: 19– 20). Chowdhry (2011: 246), writing about the unmarried men in Haryana, an Indian state with a longstanding skewed sex ratio, says ‘The unemployed and single men of Haryana provide the raw material for all agitations in the state.’ She further states that ‘certain villages in Haryana have become so notorious for crime that people do not wish to give their daughters in marriage to those villages’ (ibid.). Like others, she also notes that the conjoining of two socially disapproved statuses—unmarried and unemployed — can have severe effects on society, with unmarried men being seen not as an asset, but as a threat (ibid.: 247).

In their chapter in this volume, Bose et al. examine whether domestic violence and control over women is higher in areas with a gender imbalance. They argue that although the ‘dyadic power’ of women is expected to be higher when they are in shorter supply, Indian women in districts with high sex ratios experience more physical abuse and a higher degree of control than those in areas with better sex ratios. Their research could be further extended to explore a repeated ethnographic finding — that men in such areas exercise greater surveillance over their wives and display a higher degree of suspicion if wives venture out to work. In some high sex ratio Indian states like Uttar Pradesh, subjecting the woman to constant childbearing is used as a mode of exercising control over her. It is obvious that control over women’s fertility becomes further intensified when she is expected to produce sons and not daughters. Ahlawat’s chapter in this volume makes the point that cross-region brides in the Indian state of Haryana, who are brought from far-off states consequent to the local bride shortage, are subjected to greater domestic violence as they lack natal family support structures, which act as a shield for local brides.

In India, there have been early discussions of the possible links between violence and adverse sex ratios. In a much noted paper, Oldenburg (1992) argues that sex ratios tend to be more masculine in areas that are more violence-prone, and where muscle power is needed to protect and acquire property. Thus, murder rates tend to be higher in the high sex ratio districts of Uttar Pradesh. Examining further the relationship between crime, gender and society, Dreze and Khera (2000) find that murder rates are indeed higher in districts with low female-male ratios, and conclude that patriarchal, male-dominated societies are likely to be more violent.

Other than this shared fear of violence, the other area of strong interaction is that of the pressures of marriage in both India and China. In Lisa Eklund’s article on ‘Marriage Squeezes’, we find a description of pressures to be married very like those in India:

Among the young adults interviewed in this study, marriage is a central element in life. Almost all express that they will, or have already, entered marriage. The interviews generated several interesting insights with regard to the understanding of the marriage squeeze. First, among those who are bisexual and homosexual, both women and men think they will adapt to the heteronormative institution of marriage and marry someone of the opposite sex one day, suggesting that heterosexual marriage is indeed hegemonic, even among young adults. This may partly be explained by the fact that being married to someone of the opposite sex is the only way to have a child in China (Eklund 2013). Second, there was no indication that the surplus of men would reconfigure marriage for men in terms of easing the pressure to get married. One informant, Dawei, who is not heterosexual and therefore not interested in getting married (given that same-sex marriage is not legal), explains why staying unmarried is acceptable for him, but not for his parents:

We have been saying like ‘There are three ways to be unfilial; not passing on the next generation is the worse’. It means there are three ways in which you can treat your parents very badly, and the worse is that you don’t have children. I’m not worried about not having children; I just think if you don’t get married you won’t have children (…) This old saying is not that strict to my family because my parents are very open-minded. I think they would be very sad if I don’t get married but they will go through it, finally I think they will understand. What they feel is not about if I don’t get married so I don’t have children, it’s about not getting married. Not getting married is weird, it’s not normal.

Third, as the quote above reveals, the inter-generational contract is very important for norm-setting on marriage. Fourth, despite the fact that men greatly outnumber women, there is also a female marriage squeeze. Caohua, a woman in her early twenties, explains that she does not feel she has a wide range of potential partners to choose from, even though the sex ratio in her age cohort is 112. Rather, she expresses concern that she will end up as a ‘leftover woman’, as she is not certain she can find the one who is appropriate for her. According to her, leftover women end up single because they do not find the appropriate man and do not want to pick ‘the second choice’. When asked if she can accept a life without marriage, Caohua says:

I can accept, but my mother will be anxious if I don’t marry when I am about 30 years old. She will introduce someone to me. That’s what she was doing to my sister now because my sister has graduated, and they want my sister to date with some man now and prepare for her marriage. (…) My pressure is from my mother. She will force me to marry. Because in my hometown they think it’s abnormal to be alone all your life.

As evident from the quotes from both Dawei and Caohua, parents’ expectations are important in creating the pressure to marry, and marriage earns social recognition from both the wider community and the family. Deviating from the marriage norm is therefore considered abnormal. Finally, from the point of view of some young adults themselves, there exists a sentiment that marriage is not something for them, but that eventually they have to get married because ‘that is what you do’.

‘Too Many Men, Too Few Women: Social Consequences of Gender Imbalance in India and China’, edited by Ravinder Kaur, Orient Blackswan, pg 340.