On its 50th anniversary, Kishwar Naheed's 'Lab-e-Goya' still holds true as an autobiography of a whole generation.

The most beautiful and meaningful creation of nature is woman.

Perhaps this is why the theme of most of the world’s poetry is the self of the woman. Ishtar of the valley of the Tigris and Euphrates, Naheed and Shireen of Iran, Leila of Najd, Isis and Cleopatra of Egypt, Sita and Draupadi of the valley of the Ganges and Yamuna, Helen of Greece, Beatrice of Italy, Heer of Punjab and Sohni and Sassi of Sindh; therefore countless fictitious and historic women whose songs have been sung by poets.

But when the woman whom we know as a verse personified from head to foot herself emerges in the form of a poet, the traditional harmony of our emotions gets disturbed. This too is applicable to the present in that here the name of a female poet was called out in a mushaira, and there the lens of glasses began to be wiped and the knot of a tie arranged.

We have till now not accepted a woman as a human; she is still a gender.

Female poets are rarely to be found in Urdu literature because poetry was considered an occupation of men indeed just a century ago. That is why the poet had said,

But old values have changed now. Now despite the jests of hazrat Akbar Allahabadi, women are studying English and are engaged shoulder-to-shoulder with men in various fields.

And in the field of literature now, they are indeed in abundance; it is a secondary matter that the attitude of the knowers of poetry towards them is still affectionate or amorous. While reviewing the poetry of female poets, they could not ignore their feminine personality. Whether it is me, you or Mir, nobody is absolved from this outrage. 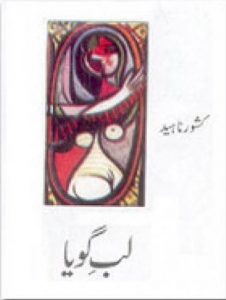 Lab-e-Goya (Speaking Lips), published 50 years ago this year by Kishwar Naheed, who turned 79 on June 18 last week, contains great material for those literary detectives who are fond of the assimilation of the self or who meet the creation of the artist in pursuit of compiling his autobiography.

A lot is being written these days about the understanding of the new generation. This understanding has become a global issue. The authorities are in far-reaching fears. The ministers of knowledge and intellect are concerned and the grandees of faith and nation are angry but all strategies have come to nought. The anger and alienation of the new generation appears daily in a new form.

Actually, the thing is that the yeast of the understanding of the new generation has been fermented by industrial civilisation. Which impious wretch can deny the rewards and blessings of this civilisation? But this civilisation is intentionally abstaining from fulfilling the needs of the spirit of the age in the West. But this avoidance is further increasing the internal contradictions. The actions of the new generations are a reaction to this very contradiction.

Also read: ‘Kishwar Naheed Must Live’: In Defence of the Urdu Poet

In the bazaar of slave trade, everything is being bought and sold and all values are weighed in the scales of rupee ana-paii. Whether it is the relation of husband wife or parents, brother and sister or neighbours and people of the same profession, everyone relies on money. If friends are made, it is done with a view to personal benefit; marital relations are established for the sake of personal gain; if relationships are sought, it is with the thought of personal profit; if guests are treated with hospitality, it is for personal motive. Even welfare and reformist works are done for personal name and fame.

In short, everywhere there is a state of selfishness. No one is a companion and sympathiser to anybody. People are friendly but are becoming alienated from each other from within.

And how much bigger a city is, the stamp of alienation is deeper on it. The inhabitant of cities like Karachi and Lahore feels solitary even in a crowd of millions. This solitude is becoming his fate. The teahouses and restaurants are full but those who patronise them have no personal relation even with the waiters and cooks there, what to talk about the Khasis working in the tea-gardens.

There is an abundance of articles for sales, but for customers, the salesmen who work there are just salesmen, not humans. We travel in taxis, cars, rickshaws and airplanes day and night but are even unaware of the nation, race, region of the person who takes us to the desired destination. We now buy readymade clothes from shops and have them washed in laundries. Therefore our familiarity with the tailor and the dhobi is also coming to an end. When we go to the cinema, we consider it to be against etiquette to even talk to the person sitting by our side.

In short, our relations with other humans are decreasing at the same rate with which the speed of the convenience of manufacture is increasing.

However much the glass and jug maybe filled, the tavern is empty

My solitude within, the duality of my self
Is licking me like termites, these unicolored selves

This air of the perception of solitude is prevalent over the whole of Lab-e-Goya. Kishwar Naheed works in an office; meets friends and relatives; spends time with her husband and children. Apparently she should not at all be feeling the perception of loneliness, but what is the cure for her solitary spirit?

Kishwar Naheed sometimes expresses this solitude purely from the tongue of a woman:

Sometimes she symbolises the scene of night as solitude to say:

And sometimes she mentions the relations of love, which have increased the intensity of solitude even further:

But solitude is still possible despite proximity. If two personalities do not harmonise or begin to imagine dominance over each other as love indeed, then too their proximity can become distance and solitude,

But the poet is not heartbroken. Her solitary evenings are lit up by the lamps of memories and fragrant flowers of love:

‘That man is color, fragrance light for me
After whom nothing seems good for me’

‘When I remembered it was indeed in the ruined path
That I found flowers, red wine, silver’

Kishwar Naheed repeatedly mentions the duality of the self. Though the hypocrisy, deceit and pretence of the whole society is absent from her circle of thought; but Kishwar Naheed has very skillfully presented the various ways in which a woman has to put the curtain of overt over the covert in her social and private life in this society.

In this society, where all the moral values are devised by men, a woman is forced to proceed according to the wishes of man. She has to tolerate every pleasure and displeasure of man, in fact drink this chalice of poison with laughter. Kishwar Naheed has studied this duality from the view of a woman and how well has she done it,

And this is the limit,

‘In the eyes of laughing faces bloodshot with memories
All faces are a canopy of longing, the wedding’s monochrome vagaries’

Kishwar Naheed’s inner passion is not the reform of Sufism and neither is it some mental condition. It is rather an honest attraction which acknowledges wholesome and affectionate love.

In its code of conduct, surrender is the very essence of faith. The state of her absorption is such that she cannot see anything else in the world except her love:

‘I am seen from wherever I want in every direction
From every mirror-maker I want this deposition
From every horizon of the door I want this colour
From every pathway, for your shadow I clamour
For the sake of the joyfulness of sorrow, companies are great
Is there someone whose heart and soul I can sate
I will change the frenzy of fidelities
But I want to love him with my own incredulities’

Note: All the translations from the Urdu are the writer’s own.

Raza Naeem is a Pakistani social scientist, book critic and award-winning translator and dramatic reader currently based in Lahore, where he is also the President of the Progressive Writers Association. He has written on, and translated the selected work of Ismat Chughtai, Fahmida Riaz, Zehra Nigah and Razia Sajjad Zaheer. He can be reached at: razanaeem@hotmail.com