The Poet with the Smallest Suitcase in the World

Let Nida Fazli be remembered for the demand he makes, perhaps even more after his death, that this cannot be a nation of tongues severed in the name of religion. 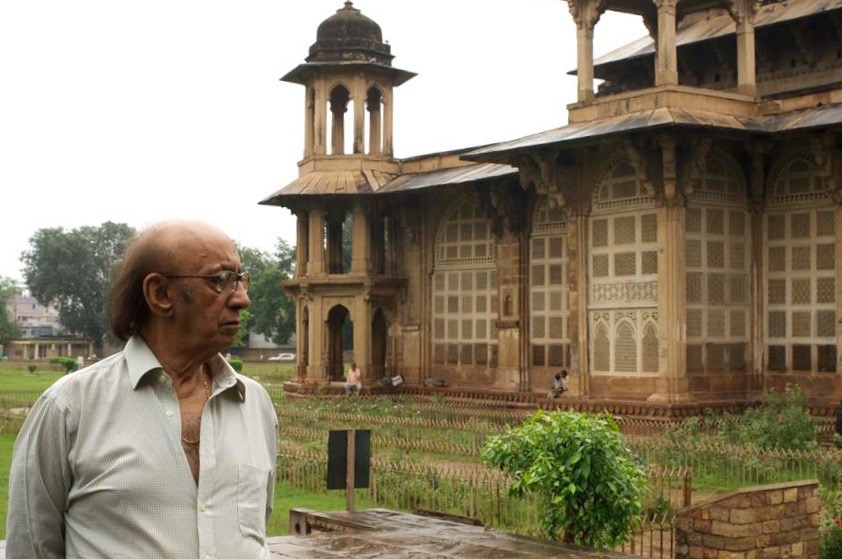 One evening in 2004, I got a request that still resonates as a dream. A few friends were part of a new tea joint coming up in Nehru Place and had invited the urdu poet Nida Fazli to inaugurate it. They asked me to spend the evening with him in the hotel the evening before the inaugural day. As we went to pick him up, I was already trying to remember the songs from his pen that life was made of in school and college. I remembered for instance, Lata Mangeshkar’s ‘Tere Liye Palkon Ki Jhalar Bunu’, set to music as if on water, in the most dulcet manner by RD Burman. I think Pandit Shiv Kumar Sharma, who often accompanied RD, played the santoor for the song. I remembered ‘Kabhi Palkon Pe Aasoon Hai’, another song from the same film, Harjaee, which Kishore Kumar sang with a measured elegance, as if balancing pain with grace. I remembered his famous ghazal, ‘Kabhi Kisiko Mukammal Jahan Nahi Milta’, set to music by the maestro, Khayyam, and sung by Bhupinder, whose voice had a unique mix of urban angst and old world charm, quite right for the song. Fazli spoke memorably of the loss of fraternity in the modern world of fragmented individuals, where the second line of the couplet goes: ‘Zuban mili hai magar humzuban nahi milta’ (You are gifted a tongue, but find none who shares it).

We reached Delhi airport to receive him right on time as his flight had just landed. As we waited, I noticed a friend bringing out a placard with his name written in bold letters. I was aghast. I immediately requested him to take it away, assuring him I could recognise him. It was not simply about having seen him live on television or his photographs in magazines. Intimacy is born of memory, and that alone is proof of how much a person matters to us.

Nida Fazli’s face was etched in my mind, his clean baldness, that childlike glint in his eyes, a face that bore his name, his poetry, and his gentle presence in the world. He finally emerged from the crowd of people walking past, and the first thing that struck me was the suitcase he held in his hand. He was coming from Bombay, alone. But the suitcase he was carrying was smaller than the smallest suitcase I had seen. It was the suitcase of a child that could hold only the barest of things. Was he among those poets with a heavy heart who travelled light? Or was he simply the poet whose needs were simple and small enough to fit into that tiny rectangular object? He did not look embarrassed about what he was carrying. The world around him looked more embarrassing, tugging along their heavy luggage, clearly filled with huge appetites and needs. Nida Fazli had no need for things. He had enough to carry in his heart. As we travelled to the hotel, he spoke softly and with good humour. Soon the others left us at the hotel and he and I toasted with his favourite brand of whisky, Chivas Regal. We started talking about poetry. I tried to impress him by mentioning his songs I knew by heart. He gently asked me, “But have you read my poetry? Not just the ones I wrote for films.” I shook my head, caught on the wrong foot. I requested him to recite a few of his poems from the book he was carrying. I recited a short love poem by Faiz, of how the city was full of the fragrance carried by the dawn’s air, wafting from the beloved’s bedroom. He asked me if I wrote poetry. Almost shyly I said, yes, I do. I recited a small poem on stillness, and he smiled, saying I could convey a lot using few words. I knew that compliment would linger forever. Then I shared with him my quarrel with poems that were written as if only for oneself or for people lost in their private worlds. Poems which did not tackle the lack he wrote about, of people without a fraternity, drifting away aimlessly into the pettiness of daily life and its immediate needs. Wasn’t poetry supposed to bridge the gaps of alienated lives?

Fazli nodded. He said, poets have forgotten the common man, who is everyman, all men and women, who are looking for respite. Poetry cannot only be about one person’s troubles, but speaks for what we are suffering together. I could relate it with his poetry, through the songs he wrote. Soon our conversation was interrupted by a few friends visiting him. They called him “Nida bhai” and I found it endearing and addressed him the same way after they departed. He suddenly mentioned something that bothered him: How poets like Kaifi Azmi and Ali Sardar Jafri, who belonged to the Progressive Writers’ Movement, ignored him, and perhaps did not think much of him. He insisted, “But I write for the simple person, who is in everyone, who exists across classes.” I nodded. I too did not believe in strict political directives on literature. Sartre’s idea of “commitment” was rejected in Europe long back. We had no reason to differentiate literature according to ideological demands. It was necessary to broaden the meaning of progressive literature and be generous.

Hearing of his death on Monday, I was reminded of the simple presence of the man and his disarming smile, a smile that did not lose ties with his childhood with all those years he carried with him, and which spoke through his eyes. Hearing of his death, with a slight lump in the throat, I recollected the famous line in one of his most heartwarming songs, ‘Tu Is Tarah Se Meri Zindagi Mein Shamil Hai’, put to music by the rare woman music director, Usha Khanna.

In the song goes the line, ‘Kai Dino Se Shikayat Nahi Zamane Se’, (Since a long time, there is no grievance against the world…). It is impossible for us to say that any longer. We live that grievance every day, and perhaps he lived it too. With Nida Fazli, not only a world but an era comes to an end. We can’t address the world with Nida bhai’s simplicity any longer. A Kashmiri who grew up in Gwalior, he did not accompany his family to Pakistan during partition. In one of his ghazals, Nida Fazli writes, ‘Girja mein, mandiron mein, azanon mein bat gaya / hote hi subhe aadmi khanon mein bat gaya’. For him, temples and mosques had no use if they contributed to a divided society. His simple idea of ‘man’ was similar to Kabir’s: A wayfarer whose spiritual duty is seeking out his fellow men instead of the divided places of worship.

Let Nida Fazli be remembered for the demand he makes, perhaps even more after his death, that this cannot be a nation of tongues severed in the name of religion.

Manash ‘Firaq’ Bhattacharjee is a poet, writer and political science scholar. His first collection of poetry, Ghalib’s Tomb and Other Poems (2013), was published by The London Magazine. He is currently Adjunct Professor in the School of Culture and Creative Expressions at Ambedkar University, New Delhi.