The Colossal Indian Contribution to A War That Wasn't Its Own 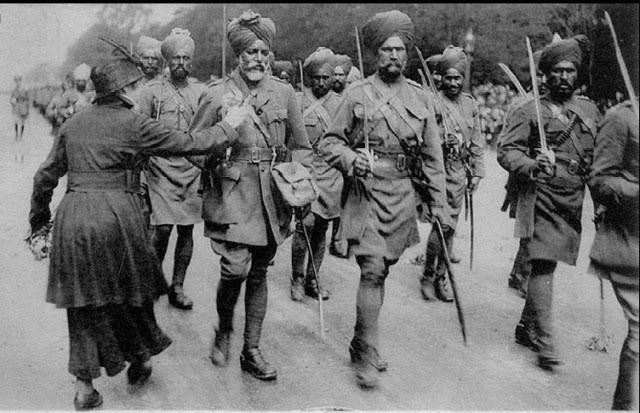 Sikh soldiers marching in Europe during the Great War (photo supplied by publishers.)

But for the colossal and almost forgotten  Indian contribution, World War I (1914-18) could have ended differently with all kinds of  dastardly  implications for the trajectory of the 20th century. The centenary of that long and bloody  ‘Great’ war has rekindled  considerable interest into various facets of those  tragic years and many books have been published over the last year adding to the considerable body of scholarship and recall that exists  on the subject.

The dominant historical narratives of World War I have been Euro-centric in the main and the colonial orientation is more than evident in the victorious  reconstruction by British historians and  authors over the last 100 years.  The Indian contribution, often  strait-jacketed as that of the subaltern  ‘native’ has received relatively less critical attention and this gap has been admirably redressed by  Shrabani Basu in her book on Indian soldiers on the Western front.

Deployed like canon-fodder, the significance of the Indian soldier is lucidly framed in the introduction where Basu notes that less than four weeks after landing in Marseilles, France in the autumn of 1914, “Indian troops were thrown into the First Battle of Ypres against the world’s best-equipped army (Germany). They went into the trenches still in their cotton khakis, soon to face one of the harshest winters they had ever seen.”

Europe was a  totally alien world to these simple soldiers, and trench warfare – that also saw the use of chemical agents (gas warfare) – was well outside their rudimentary military training.  Yet, as the author notes: “They fought with honour for their regiment…..over eight thousand lost their lives on the Western front, blown apart by shell fire, buried alive in soggy collapsing trenches or choked by gas. Nearly five thousand were never found.”

The Indian sacrifice was all the more poignant for they were fighting a war for the King of another country – a war whose principal interlocutors, complexity and causes they barely comprehended – and that sacrifice made a critical difference. Writing about the induction of Indian troops in Belgium in October 1914 to the  first victory over German troops in March 1915, Basu points out that “The Indians arrived in the nick of time, when the British troops were exhausted in the first weeks of warfare. The armies from Canada, Australia and New Zealand were still on their way. It fell on the Indian Corps to hold the position (line). The Germans would have reached the ports, were it not for them.”

Almost one and a half million Indians (combatants and non-combatants) crossed the dreaded ‘kala paani’ (ocean) and went to the frontline in Europe and other theatres; the imperial records of the time also noted that a total of 172,815 animals that included horses, mules and camels were part of this Indian contribution.  When the war ended in November 1918, nearly 10% of the Indians were either killed, missing  or grievously wounded. The numbers are staggering – 72,000 killed and a little under 80,000 wounded. In 13 pithy chapters, the book weaves a compelling picture of the many incidents that connect British India to the Great War, beginning with the shelling of Madras by the German cruiser SMS Emden on the night of  September 22/23, 1914 and ends  with the Jallianwala Bagh massacre of  April 13, 1919.  The inadvertent reference to the Emden, as a “cruise ship”, however, ought to have  spotted by a beady-eyed  editor.

Among the men who perished in the trenches was the English war poet Wilfred Owen who was killed in November 1918 in France.  He had inscribed in his notebook the words of Rabindranath Tagore : “ When I go from hence, let this be my parting-word, that what I have seen is unsurpassable.”

It is some parts of this ‘unsurpassable’ experience that Basu evocatively recreates in deft strokes as she dwells on a few central characters and weaves the personal with the larger backdrop of  major historical events. On the Indian side there are six soldiers whose gallantry on the battle-field is the stuff of legend ; two intrepid airmen; three maharajas; a high official of the British Empire and finally a  humble cleaner – Sukha. The British cast includes some of the generals who commanded and managed the Indian Corps, two viceroys, members of the war office, the cabinet and  the management of the innovative Indian Soldier’s Fund.

The reader is introduced to a young 13-year-old child bride, Satoori in the Garhwal Himalayas who in 1914  anxiously witnessed her 22 year old husband – Gabar Singh Negi of the Garhwal Regiment – being recalled from leave to board the ship that would take him to France. It was the last time she would see Negi for he died in March 1915 in a  fierce battle near  the village of Neuve Chapelle and was awarded the Victoria Cross posthumously.

Basu has diligently trawled through the  available  records in UK and India and the personal letters from the Indian troops to their families that were retained by the military censor at the time and which are a treasure-trove of the Indian soldier’s view of the Great War. Missives from the Indian princes to the viceroy in India offer one perspective, while some refer to the challenges of language in France and their admiration for the manner in which the hospitals in Brighton were providing medical care.

The courage of the poorly clad, ill-equipped Indian soldier who persevered against all odds was also acknowledged by the enemy and the observation of a German soldier is instructive. Writing in a German newspaper, he noted, “Today for the first time we had to fight against the Indians and the devil knows these brown rascals are not to be underrated. At first we spoke with contempt of them. Today we look on them in a different light…..truly these brown enemies are not to be despised.”

The officer-men bond which transcends nationality is best epitomised in the vignette of Field Marshal  Frederick Sleigh Roberts, a former C-in-C of the Indian Army who set up the Comfort Fund for Indian soldiers in London. Having made an earnest plea for donations, the sprightly 82-year-old decided to go to France to ‘see my Indian soldiers.’ True to the spirit of a caring commander who placed his personal interest last, the Field Marshal refused to wear a greatcoat since his Indian soldiers did not have such warm clothing, but with fatal consequences. Lord Roberts died  of pneumonia on November 14, 1914.

Remembered in war and occasionally revered – but soon forgotten and often treated with indifference by state and society – the unqualified sacrifice of the soldier is in contrast to the cynical manipulation of the dominant political imperative. A few months after the stupendous Indian contribution  to the Great War and the elusive hope of greater autonomy akin to dominion status, the British colonial administration unleashed the Jallianwala Bagh  massacre in Amritsar and the infamous ‘Crawling Order’ was imposed on the ‘natives’ from 19 to 25 April 1919.

To further punish the Indian citizenry in the Punjab, the Royal Air Force (RAF) carried our aerial bombing of villages – dropping bombs indiscriminately – in what must be an ignoble ‘first’ by way of the use of air power against non-combatants.

Basu filters this episode through the eyes of  Hardit Singh Malik,  who along with Indra Lal Roy was one of the legendary airmen of the War. “Malik who had so proudly flown his Sopwith Camel aircraft over Belgium and France, risking his life for the allies, watched in horror as his colleagues from the RAF pounded his homeland with bombs killing innocent civilians.”

Sensitively written, Basu an accomplished  journalist-turned-author who earned her spurs with her earlier book Spy Princess: The Life of Noor Inayat Khan has filled a major gap in the literature on World War I. One hopes that she will  turn her empathetic eye to the human texture of the Indian contribution in yet another war –  World  War II.