The Brahman in the Mughal Court

Rajeev Kinra’s Writing Self, Writing Empire is a window into the life and writings of Chandar Bhan Brahman, a skilled Farsi poet and a munshi who served in the Mughal court under emperors Jahangir, Shah Jahan and Aurangzeb. 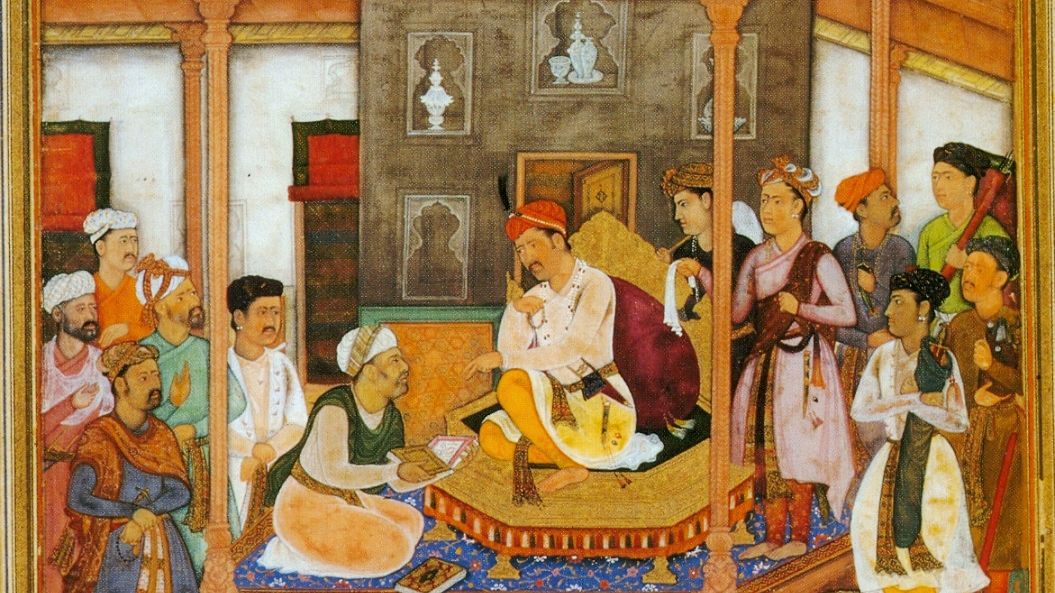 There is a fascinating story hidden in a small section of Rajeev Kinra’s book on Chandar Bhan Brahman – a munshi who served in the Mughal court from the 1630s to the 1660s. The story is about the time princess Jahanara, Shah Jahan’s eldest child, sustained severe burn injuries after an accident in the Agra fort. The disconsolate emperor looked in every direction for help to ensure the recovery of, arguably, his favourite child.

In his eloquent and flowery prose, Chandar Bhan details Shah Jahan’s concern, his vigil over his convalescing daughter and the efforts the court took to ensure the best medical care for her. Those who arrived at the fort included not just unani medical men, but also hakims, alchemists, herbalists and other practitioners of native medicine. A call had gone out across a wide region to secure the best possible help.

Kinra uses this story as an entry point to show that an awareness of medical science and other knowledge existed in the Mughal court and to highlight the prestige the Mughal court had and the talent it attracted from other places. The story also shows Shah Jahan as a very human figure – a father first then an emperor. The narrative also accentuates Chandar Bhan’s own role as a trusted official who was privy to the emperor’s emotions and feelings.

Most conventional texts of history relating to the Mughal period have focused on military achievements, while the more esoteric ones have stressed the literal and creative efflorescence of this period. There is also the stereotyped demarcation, from the liberal Akbar to the orthodoxy that slowly set in – according to such histories – before piety and puritanism finally became, in Aurangzeb’s time, enshrined as state policy. However, nothing could be farther from reality and this is among the many presumptions Kinra’s book on Chandra Bhan seeks to dismantle as it looks at the cultural world of this time. Kinra focusses primarily on the memoir-and-advice book (Chahār Chaman) and a collection of letters ‘Munsha’āt-i Brahman’ of Chandar Bhan.

These writings by a Hindu munshi, who was a skilled Farsi (Kinra uses Persian throughout) poet and prose stylist, afford us an ambitious, many-sided look at the guiding principles of Mughal officialdom, which, in turn, mirrored the empire’s ethos.

When Chandar Bhan writes about those who made up the bureaucracy and about the skills and talents required to succeed in such a meritocracy – for the empire was undoubtedly one – he also tells us about the literary sensibility and the mystical civility that prevailed guided by what Akbar put into practice first – sulh-i-kul. This is an Arabic phrase drawn from Sufi principles, which translates as “peace for all”. In practice, it was the extension of goodwill and civility towards others, including not just those in one’s immediate environs, but also one’s opponents, other ruling families, practitioners of other faiths, superiors and subordinates.

It was a principle arrived at with difficulty and argument – as any study of Abul Fazl’s Akbarnamah and those by his rival Badayuni will reveal. But it sustained the reign of emperors who would follow – Jahangir, Shah Jahan and Aurangzeb – all of whom Chandar Bhan served in various capacities.

Many worlds of a munshi

Kinra’s attention to Chandra Bhan’s life and work is slightly different from those who have worked on similar officials and their texts. In The Making of a Munshi, Muzaffar Alam and Sanjay Subrahmanyam allude to Chandra Bhan’s and the letter (also cited by Kinra) he wrote to his son mentioning the qualities and attributes required of a good munshi. They also refer to another munshi who served in Aurangzeb’s time, Nek Rai, and his Tazkirat-i-Safar, an autobiography of sorts.

The word safar in the title of Rai’s book refers to the world of travel that was part of an official’s life. They moved not just with their superiors but also in search of better opportunities, in much the same way as artists and other men of literary talent did. For instance, Birbal, who travelled to join Akbar’s court, and the artists who travelled often between the courts of the Deccan sultans and the Mughals, all followed this pattern of travel.

Chandar Bhan, who used his caste name as a takhallus – something Kinra suggests was a deliberate act – was born towards the end of Akbar’s reign. The need for that identification was a sign that Chandra Bhan was secure in both worlds – a “sacred thread wearing” man from the learned castes who also counted among his mentors the Mughal officials who happened to be Muslim and were deeply spiritual. Most were like Chandar Bhan himself, affected and influenced by this Indo-Persian ethos of seeking harmony and showing a “mystical civility” toward all.

Chandar Bhan was particularly drawn to Sufi thought. He calls himself both a “faqir” and “broken-hearted” – this latter term referring to a tone of mystical longing and detachment. These sentiments bred incorruptibility and devotion to work which, as the munshi stressed, were just as important as knowing the rubrics of accountancy, the art of writing petitions and other aspects of the government life.

Equally vital was a keen sense of poetry, for lyric, verse and rhythm made their presence felt – as some of Chandar Bhan’s letters and petitions show – in almost every aspect of official life whether it was in official correspondence, edicts and in addressing the emperor.

This is how he wrote to another official Ikhlas Khan:

(I’ve had no news of my dear friend today;

Yesterday’s promise is gone, and I am empty inside today)

Chandar Bhan, the diarist and raconteur

Chandra Bhan was born in Lahore and, like his father, trained to serve in the government. He learnt Farsi, since that was the language of official use, and calligraphy – one aspect taught to him by masters who happened to be shudras. He then went on to work in the revenue department where he served proudly, as he mentions in Chahar-Chaman, wazirs such as Afzal Khan Shirazi and Sa‘d Allah Khan.

He also has high praise for ministers such as Todar Mal (Akbar’s revenue minister) and Raja Raghunath, who worked in the early years of Aurangzeb’s rule. For a while, following Afzul Khan’s recommendation, he also served as Shah Jahan’s personal diarist – an account that appears in the second section of the Chahar Chaman. As the emperor’s diarist Chandar Bhan had an intimate knowledge of the royal personage’s movements, and by detailing these, he implicitly emphasises the respect and trust he enjoyed. Shah Jahan’s day began early with a sumptuous breakfast, with fruits drawn from every known corner of the world followed by the jharoka darshan, when the emperor made a public appearance at an open window that looked out over the open ground bordering the river, whether in Delhi, Agra or Lahore. This was followed by the darbar where official matters were conducted, and discussions with advisors continued in the private chambers.

In another section, Chandar Bhan details the geographical spread of the empire and enumerates the charms of some regions. In revelations that might come as a surprise to any modern-day reader and visitor to Delhi, he describes the city’s weather as healthy, and how in summer arrangements were made to secure ice from the Himalayas.

Delhi was a city finer than Cairo, Herat and Isfahan. The other place that is highly praised is Kashmir. For all the arduousness of the journey to Kashmir, Chandar Bhan considered it the “equivalent of paradise”.

Shah Jahan and after

Chandar Bhan’s works shed little light on what transpired during the struggle of succession between Shah Jahan’s four sons (1657-1658). But the absence of historical detail here can be read, as Kinra argues, as a sign that it was business as usual.

Aurangzeb continued with the old policies for a long time. Raja Raghunath served in the finance department and Chandar Bhan, despite being, especially in later accounts, wrongly identified as Dara Shikoh’s protégé, continued to enjoy the emperor’s trust. With his son Tej Bhan he served as one of Taj Mahal’s main caretakers. At the time of Shah Jahan’s ceremonial burial in the mausoleum, the munshi gives a careful account of the sums spent, not just on the feast but also in the alms and charities given to people from diverse sects, the clerics, the Sufis and the other mendicants.

There have been attempts by later writers to label Chandar Bhan as the “first” Urdu writer – a mistake, Kinra asserts, deriving from a lone Urdu ghazal attributed to Chandar Bhan. His strength in Farsi, though, is undisputed. His prose style was so exemplary that one section of his Chahar Chaman was used in The Persian Moonshe, translated by the late 18th century orientalist Francis Gladwin and used in Farsi classes by the East India Company in Calcutta.

Notwithstanding what became of his story and his works – and Kinra brings about a commendable restoration – Chandar Bhan appears a man secure in the worlds he straddled. Not hiding his identity, and yet using the words of another language – one he learnt to perfection – to talk playfully of his own self.

(It is incumbent upon us to serve the idol, Brahman;

How can any image that resides in the heart be erased?)

(A liberated man ensnared by the abandonment of desire

In today’s world of sharp and divisive identity politics, Chandar Bhan’s poetry, thoughtfulness and ease of straddling multiple worlds is a balm to the soul.

Anu Kumar is a graduate of Vermont College of Fine Arts’ MFA programme in writing. Her most recent book is  Emperor Chandragupta (Hachette India).