A Cassandra in Trumpland: Sarah Kendzior's Pithy Commentary on Privilege

Kendzior's collected essays, 'The View From Flyover Country', condemns a system so blind to its own faults that it punishes people as “failures” for playing in a game that is rigged against them. 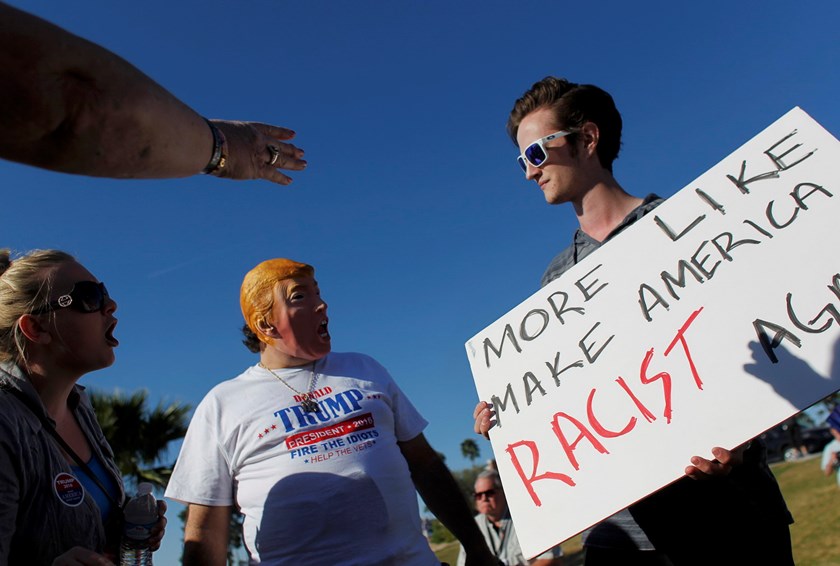 Please put everything aside and try and get hold of Sarah Kendzior’s collected essays, The View From Flyover Country. I have rarely come across writing that is as urgent and as beautifully expressed. I came across Kendzior on Twitter, as the Ferguson protests and the Black Lives Matter organisations took off. At some point between those protests and the Trump campaign, Kendzior made the point that while we talk of the decline of Middle America, the loss of jobs disproportionately harms women and minorities – thus privileging the resentments of the “white working class” was only a sophisticated form of racism, privileging white distress over those who are affected worse. This is the type of insight that is missing from the big mainstream newspapers and as publications such as the LA Times, rush to normalise the horrible lot that Trump drags with him into the White House, the need for clarity and a moral stand has never been more important.

Kendzior’s work has two distinctive qualities that make it stand out. The first is that she is writing from, and about, St Louis, Missouri – a city that was once a cultural hub, but has seen part of the slow decline witnessed in other manufacturing cities of the US. The second is that she is a scholar of the Central Asian republics, with a doctorate in anthropology from Washington University in St Louis. To say that this is an unusual combination would be a radical understatement. Too often scholars of undemocratic regimes leave their horror for the way that humans are treated at their borders, unable or unwilling to see the conditions that the less privileged among their fellow citizens face. Because both journalism and academia are elite professions in themselves – a point that Kendzior makes repeatedly, and with particular force – this distance from local reality is exaggerated even further. The ability to see both allows Kendzior to make some very interesting comparisons, such as in a recent essay on some striking similarities between Trump’s style and that of Central Asian autocrats. The essays in this book – available only as a seemingly self-published collection on Kindle – are from Kendzior’s time writing for Al Jazeera on Middle America from 2012, and can be found on the site. As such the collection suffers from one of the principal problems of this genre: repetition of similar points and statistics. Nevertheless, it is a testimony to both the writing and the urgency of the questions voiced, that those repetitions are minor irritants in a larger body of powerful work.

The purpose of the book is – quite bluntly – to help support her work, something she makes no bones about. Reading just the opening essay is enough to make you understand why such work should be supported:

The overarching themes of Kendzior’s essays are race, gender, an unending jobs crisis, and a “pay to play” culture in which credentials are only available to those that can buy them, excluding the middle and lower class from the public life. At heart of the writing, is a concern for justice and a condemnation of a system so blind to its own ingrained faults that it punishes people as “failures” for playing in a game that is rigged against them. The sentences are short and pithy.

On gentrification, something that residents of Delhi’s Hauz Khas Village should know well, she writes:

“The problems that existed in the neighbourhood – poverty, lack of opportunity, struggling populations denied city services – did not go away. They were simply priced out to a new location.”

On the striking similarity of economic outcomes in both democratic and non-democratic states:

“In authoritarian states ruled by tyrants, in democracies allegedly ruled by law, we find the same result: hard-working people let down by the systems which are supposed to support them. When the most you can ask from your society is that it will spare you, you have no society of which to speak.”

On a media completely detached from what it is reporting on: There is a clear, frank beauty to Kendzior’s writing that makes it immensely appealing, but maybe more importantly, is how relatable her examples are. The structural inequalities of class and caste in India could be very easily described in such terms. This makes you ask the obvious question – why has this type of writing not emerged earlier? Why is it that the New York Times, the Wall Street Journal, or policy think tanks, feature poverty, lack of rule of law, and lack of opportunity in the US in starkly different terms than they portray these issues in developing countries?

The answer to this is the treasure that is at the centre of what Kendzior documents. Comparing the education and jobs available to Drew Gilpin Faust, the president of Harvard University (also Harvard’s first woman president) and opportunities today, Kendzior shows what has changed. At the time of Faust’s graduation in 1968, the average college charged $2,545 for a four-year course, and many public colleges were free. Today they charge an average of $53,040 per year, more than the median American household earns. In 1968 a paying government job was easily available for Faust – today that same government job is only accessible to those who have done (usually unpaid) internships, spending months living in the most expensive cities in America. The credentials necessary for jobs in government, public policy and the media – the elite institutions that shape the country – are now beyond the reach of any but the rich and for the rich their poor are “failures”, and the poor of other countries, merely exotic failures of badly governed countries.

Sadly enough, those in the same professions in countries like India are also hampered by the same problems. Just as in the US, your credentials from expensive, elite institutions in the most expensive cities in the world matter. And even if you manage to get them, the poor cannot afford unpaid internships, pro bono work, or even the irregularity of jobs. In his essay on the lack of Dalits in the media, Ajaz Ashraf pointed out this exact same thing. The US system matters because, in one way or another, it shapes the world – just witness the strikingly high number of Indian, Chinese and Pakistani policy commentators who have a US degree.

Kendzior’s essays resonate with me powerfully on a personal level. I did a graduate degree in international relations in the US after doing one from India because I wanted to know how the US made foreign policy. The graduate school cost upward of $50,000 a year, including room and board. My parents sold part of their farmland – their only source of income in retirement – and I received some scholarships and assistantships. I did a series of internships in upstate New York and Washington DC, most of them unpaid. In the end, I had a debt of about $20,000. I then spent years working in policy and journalism jobs with an average salary of about INR 30,000 a month – at that time, about $600, or $7,200 a year. Seven years ago my father was killed when coming back from the farm on his scooter, run over by a truck. I still had not paid off my debt.

Today, my income tax return puts my annual income in the top 1% of Indians. It cost my father’s life and my mother’s health and half my adult life spent in unmanageable debt. This cannot be the price we ask people to pay for a seat at the policy table. The moral calculus at the heart of the US model of development is broken. It has been broken for some time, which is what makes Kendzior’s writing so truly important because it documents where the problem lies, by somebody who lives there.

Read her. It is important.