Review: Self-Aware, but Not Sentimental, Conversations With the Unglamorous Wild

The title, My Husband and Other Animals 2, first registered as too similar to Gerard Durrell’s My Family and Other Animals (1956), and then as something cloyingly conjugal. But understanding that this book is far from any sort of mawkishness is crucial to appreciating it.

It’s straight-faced and straight-talking, and demolishes tropes of heroism awarded to conservationists, in a break from the way they’re often showcased. It presents an often funny but deeply felt take on the wonder and worry in Indian conservation. Romulus Whitaker, the titular husband and reptile conservationist, appears in many chapters as a muse rather than a messiah. The author Janaki Lenin clearly adores him, but this is more about her than him.

Wildlife writing in India, represented by authors such as M.K. Ranjitsinh, A.J.T. Johnsingh, Kenneth Anderson and Jim Corbett has focused chiefly on native wildlife in forests and wildernesses. In Lenin’s telling, there is no obvious ‘endangered species’ list the author goes through, and nor does it address all of India. Instead, the animals – which include both wild and domestic, both exotic and native – are ones the author has encountered and, more meaningfully, has taken the time to observe.

So you have pet emus, millipedes, leopards, oystercatcher birds, king cobras, crocodiles and chippiparai dogs. In an easy narrative style, Lenin seeks to answer a single question: Why do animals behave the way they do, and what is our relationship with them?

Also read: A Forest Is a Story, and Two New Books Narrate It Through the Perfect Eyes

An intense curiosity pervades the pages. Lenin asks questions about animals the way other people might about human beings. For example, why did the emus eat a particularly stinking millipede? Because they wanted to. Why do lemurs rub centipede juice on their bodies? To ward mosquitoes off. Why didn’t a particular king cobra bite her, even though Lenin was unwittingly in its presence for nine hours?

Many of the reptiles that show up are dangerous, and generally considered uncharismatic. The Government of Gujarat, for instance example, is ‘freeing’ lakes near the Statue of Unity of almost 500 mugger crocodiles so tourist sea-planes can land there. In other places, crocodiles are at the centre of an intensifying human-wildlife conflict. 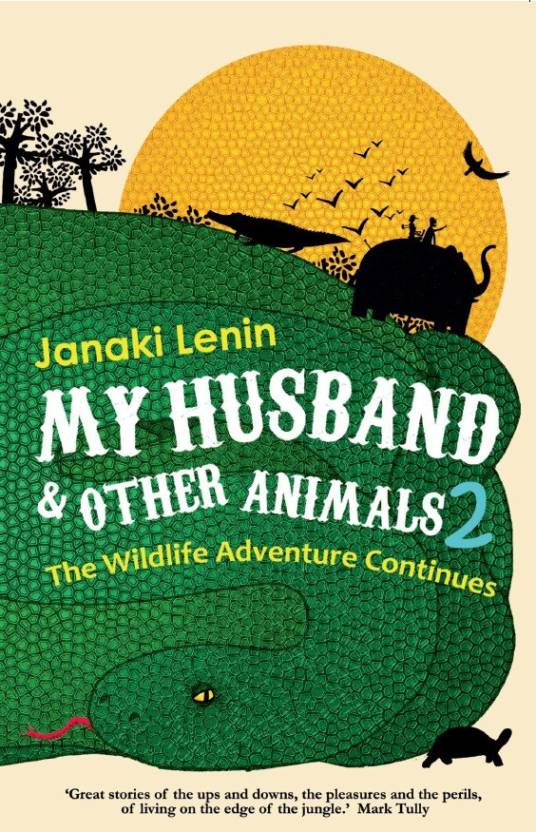 My Husband and Other Animals 2: The Wildlife Adventures Continue
Janaki Lenin
Westland Books, 2018

Sympathy for these animals is rare. Lenin’s gaze is unblinking: she accepts the animals for what they are, pointing out things that stood out to her. Like the tender gender-benders that crocodilians are good fathers. It seems a mugger at the Madras Crocodile Bank Trust (MCBT) would carry his hatchlings to the water, and shield them from birds and other predators.

A recent and unusual event in Bawa Mohtara village, Chattisgarh, where villagers mourned the death of a 130-year old crocodile, reminded me of a crocodile from the book’s pages. The MCBT’s first crocodile, which had been rescued from a zoo, died when a tunnel he was digging collapsed. Lenin writes about him: “The croc that survived spirit-crushing solitude for 15 years with equanimity, and a governor’s threat too, sired hundreds of babies in his decade-long career as a crocodilian stud.”

The book rises above observation and repartee because it doesn’t shy away from difficult topics in conservation… as much as in life.

Lenin writes in one place about how crocodiles are fed at the mausoleum of Khan Jahan Ali, a 15th century Sufi saint, in Bangladesh. The MCBT offered crocodiles to the shrine, which turned them down because it said the crocs were “heathen”. Whitaker then argued they would be blessed if the crocs drank the shrine’s water. MCBT also spotted a saltwater crocodile among the crocs already being fed and advised it be removed. But the shrine refused, thanks to a mix of superstitious beliefs and devotion. It ended up mauling people and was beaten to death.

Lenin writes, “I couldn’t help thinking: the road to this conservation hell is paved with our good intentions.”

She tries to understand human behaviour through animal behaviour, exploring why the males rape and or why homosexuality might have evolved. This could seem forced to some readers; I didn’t always buy into the associations. However, this is a new kind of writing in the wildlife and nature canon for India.

Perhaps the most important aspect of the book is the strong and unapologetic woman at its centre, who transformed from a city girl into a wildlife-lover. The bittersweet qualities of a hermetic life aren’t glossed over. Lenin takes the time, like a slow bildungsroman, to lay out her chequered journey. At the heart of it, this is a woman’s story – a woman in her own right, a woman following unglamorous animals. A woman growing deeply into what she followed. In my favourite chapter, ‘Marriages are made on earth’, she writes:

Rom was a single-minded reptile freak who loved the wild and the company of wild animals more than people. I was a city girl. I had never been in a forest or seen a wild animal before I met Rom. I chafed when trading colourful handloom saris for drab, jungle attire. I left behind armfuls of silver bangles, as they made too much noise in the forest. Beads could get caught in the undergrowth, so off they came. I confined my feet in shoes, a reminder of a hated school life. I didn’t look like me anymore.

These are moments of pure joy and pure confusion in other chapters.

“While I enjoyed living at the Croc Bank, I also remember aching to get away… we only had other staff for company. We were in each other’s homes and lives much more than is healthy. Even the best friendships can dissolve in such a fishbowl.” The kind of space the forest presented didn’t make things easier. She writes:

To an outsider, I must have seemed like a demure bride, following her husband with her head bent down. I was hypnotised by the ground that was seething with brown worms.. Leeches. More than their dietary preference for warm blood, I was terrified of contact—of their cold, slimy bodies attached to mine. The thought made me feel icky.

There aren’t many autobiographies or memoirs of women, particularly of women close to nature. There’s the sweeping Born Free by Joy Adamson (1960) and the intensely literary H is For Hawk by Helen Macdonald (2014), but little else.

Lenin’s book turns its gaze both outwards to nature and inwards to her own self. She knows her weaknesses and she owns them. If not for the creatures, read the book for just that rarity: a frequently funny, self-deprecating woman who isn’t afraid to be flawed, to be ‘unfeminine’ with minimum fuss, and who prefers self-awareness to sentimentality.