What worries me most is that if Bharat Karnad is right, we can only expect more of the same – or worse – should Modi return to power in 2019. That would further postpone or derail India’s transformation into a strong, prosperous and modern country.

If Bharat Karnad didn’t exist we would have to invent him. He is the one person who consistently and intellectually challenges every government on strategic issues, who says what needs to be said. He is the enfant terrible of the Indian strategic community, who respects no authority and calls it as he sees it. Not everyone sees it his way, but no one can doubt either his commitment to India becoming a great power in the classical sense or the scholarship he brings to this task.

His latest book, Staggering Forward: Narendra Modi and India’s Global Ambition, is no exception to the pattern he has established in the past. The book challenges one’s assumptions and forces one to think. The book is a critique of Prime Minister Narendra Modi’s foreign and security policies, and of Modi himself. The author finds them wanting against the criteria of India fulfilling its destiny and becoming a great power. It is hard to argue with his marshalling of facts that show that the past five years were years of lost opportunity – of India missing the bus; of roads and reforms promised, but not taken.

I will not summarise the book, but will try to describe what I agree and disagree with in three respects: the Modi government’s performance; the situation India faces today; and Karnad’s prescriptions.

On how the Modi government has fared over the past few years, Karnad’s analysis is focused on a detailed psychological profiling of Modi himself, which left me far more worried than I was when I started reading the book.

Karnad is frank about how he was a Modi supporter in 2013-14, and how he expected that his rhetoric of reform would be translated into action once elected. Instead, he saw a “small stakes game abroad” .

They say that a pessimist is a disillusioned romantic, or simply an optimist with experience. Karnad is both. He is pessimistic about the means and the people, but has faith in India and its destiny. 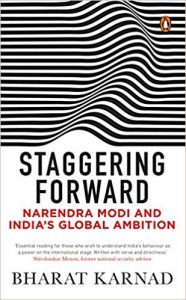 What worried me most is that if Karnad is right in his profiling, we can only expect more of the same – or worse – should Modi return to power after the next parliamentary elections. Judging by the performance of his government over the last four years, that would be a considerable setback for India and would further postpone or derail India’s transformation into a strong, prosperous and modern country.

The internal divisiveness of the last four years affects both our security and our ability to run a successful foreign policy in the neighbourhood. How can India be a great power when it is socially divided at home, Karnad asks. He also describes the Modi government’s complicity in India’s strategic shrinking influence in South Asia and the Indian Ocean region.

Karnad describes the Modi government, in which only Modi counts, as “bowing to the powerful and bullying the weak”. He sees Modi as reflexively deferential to the US and China. The net result of this deference to power has been the neglect of old friends like Russia and Iran.

More so, the Modi government’s sporadic and unskilled dealings with our neighbours has resulted in a deterioration in our relationships and security in our immediate periphery – be it in Nepal, the Maldives, Sri Lanka, Myanmar, Bangladesh and Bhutan, or in south-east Asia, where we have alienated friends. The lack of a coherent foreign trade and economic policy – as seen in the Regional Comprehensive Economic Partnership – has left us out of the reckoning in the larger region that affects us directly.

The situation at hand

I agree with Karnad that there is no coherent vision driving the frenzied visiting and eventing that we have witnessed for some time. The fundamental problem, to my mind, is that the situation around us and the world over has changed drastically over the past few years with the coming to power of new authoritarians, or “alpha-males” as Karnad rightly labels them, in China, the US, Russia, Japan, Turkey and India.

In the absence of a vision or conceptual clarity on the situation we face, the government, and instinctively the bureaucracy, continue to do what they have always done, relying on precedent and habit. But to do the same thing in a different situation and to expect the same results – which is what the present government has done – is another version of Einstein’s definition of lunacy.

We are in a situation where we cannot rely on any other power – not the US, not China, or anyone else to secure us or to promote our prosperity. True strategic autonomy is our way forward. No established power likes to see potential competitors rising, and there is therefore a limit to what we can expect from other powers.

Under Donald Trump’s presidency, the US is pulling back strategically, unwilling to underwrite an international order or provide security, and on-shoring production. China, on the other hand, is moving into the vacuum and defining her core interests in an ever expanding manner. But when Karnad extends Samuel P. Huntington’s hypothesis to argue that the great fault line in the world today is between the Islamic and the non-Islamic world, I disagree.

I agree with Karnad that there is no coherent vision driving the frenzied visiting and eventing that we have witnessed for some time.

Where I do agree with Karnad is when he speaks about how Pakistan is a strategic distraction, and how India’s real strategic focus should be on China. Restoring the strategic unity of the subcontinent as a geopolitical actor requires an accommodation with/or a neutralisation of Pakistan, and Karnad makes suggestions for how we should do so – a few in terms of military and nuclear postures.

There are a few issues in Karnad’s detailed prescriptions that he may want to address when it comes to a revised edition. The first is his very positive assessment of last year’s Doklam face-off, where India appears to have followed an older playbook, and where the outcomes now appear more mixed.

Another instance, which might need more explanation, is his understanding that Pakistan’s nuclear first-use threat against India is meaningless and empty. But he then goes on to suggest that India do the same and threaten first-use against China. Karnad does draw a distinction in what kind of use he has in mind, but it would be useful if he had explained why one threat is meaningful and the other is not.

Karnad also wrote of how India should re-test thermonuclear weapons and to somehow compensate for conventional military inferiority vis-à-vis China. These are moot and can be questioned. He assumes that our nuclear weapons are for war-fighting and that what we do not know in public does not exist within the government. I am also not sure where he got the idea that the India-US civil nuclear deal somehow included a commitment by us to cap our missile ranges at 5,500 km. This is the first I have heard of this.

Karnad seems more impressed by China than I am, assumes that it has got its way and seems to think that its dominance is inevitable unless resisted. In other places, he sees China failing to impose its “Tianxia” system, even in the South China Sea and Central Asia.

But whatever China’s trajectory is, he is right that it is India’s major strategic preoccupation. In his prescriptions for India’s China policy, he focuses largely on military responses to what is actually a Chinese challenge that is political, economic, military, and ideational too. Unlike others, who are so transfixed by the rise of China that they run to the US for comfort, Karnad rightly reminds us of our leverage in our relationship with China and that true strategic autonomy is our best way forward.

I do not see a resumption of nuclear testing by India as changing the Chinese calculus or behaviour. To my mind, the multi-faceted challenge from China requires an Indian response across the entire spectrum of power – from economics to politics to military to ideas, with both internal and external balancing, by strengthening ourselves and working with those who share our interests and concerns.

He suggests modifications to BRICS and the ‘Quad’ by removing China from the former and adding ASEAN to the latter, creating a ‘BRIS’ and a ‘Mod Quad’, as ways of improving our hand in dealing with China. I am not sure that formalising and announcing such plans are practical diplomacy. But Karnad is absolutely right that we must first come to terms with and pacify our own home in the subcontinent and the Indian Ocean region. It is when measured against these criteria that the Modi government’s policies have failed the nation.

Karnad is persuasive on the nature of military reforms and the changes in the mindset of the armed forces that he thinks are necessary if India is to drag her World War II-ready armed forces into the 21st century. He writes on the effects of technology on warfare in our context, and has extensive suggestions – many sensible and implementable – on defence production and procurement in India. He also makes a strong case for a string of Indian bases in the Indian Ocean region. I will not comment on the military options against Pakistan and China that he also describes in some detail.

What we have seen recently is the weakening of our defences that the deterioration in civil-military relations, the politicisation of the Indian army, its use in domestic politics, and the absence of necessary military and defence reforms have brought about.

I disagree with his characterisation of all policy since Jawaharlal Nehru as a failure. Deterrence has held and the peace necessary for India’s transformation has been kept, unlike the four debilitating wars we fought in the first 25 years of the republic. That might seem like a small achievement, but we have not only aimed to end poverty and improved the lives of more human beings in any country except China in the last 30 years, but also, by other measures of comprehensive national power, have improved our position in the world against most countries (again with the exception of China).

Where Karnad is right is that our strategic position in the world has deteriorated in the recent past, and much of this is because the situation around us is changing and will continue to change with rapidity, without an Indian response to the changes. This flux actually opens up opportunities for us as India. That is where we are failing ourselves, missing opportunities. His book is a useful reminder of what we could be, and a prod to consider what the next government should do.