The writer, most noted for 'Meatless Days', would always identify herself as Pakistani – “never American-Pakistani”. 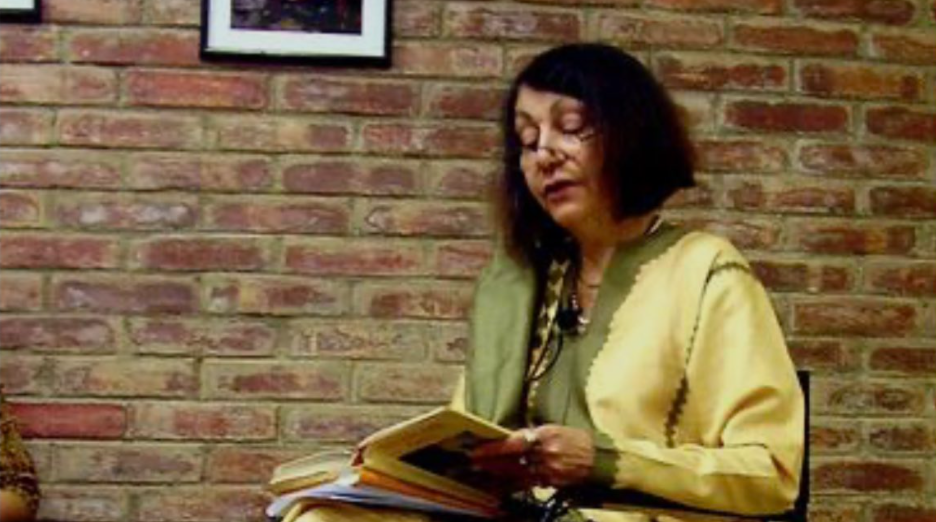 “Aur bataiye” – tell me more – a polite invitation to keep talking. I could hear her voice, naturally husky, perhaps made deeper with years of cigarette smoking and perhaps more recently with pain and other medications.

She would always send her love to Pakistan whenever I called before flying out from Boston, where we both had ended up around 10 years ago. She was staying there after retiring as professor emeritus of English from Yale University. I had transplanted myself from my home city Karachi where I was editing Aman Ki Asha, hope for peace – between India and Pakistan.

“Dream on!” I hear Sara say. And yet, she agrees, it’s important to keep on keeping on. She was hundred percent supportive of this, and the push for a regional approach – the South Asia Peace Action Network, or Sapan, the more recent endeavour, launched last year with a wonderful group of inter-generational, cross-border peace-mongers.

Sara’s name is on Sapan’s founding charter, calling on South Asian nations to institute soft borders and visa-free South Asia, to allow freedom of trade and travel to each other’s citizens, ensure human rights and dignity for all their citizens and to cooperate in all areas including public health, culture and legal reform, education and environment.

Her roots to the region remained strong, despite all the years away. If asked, she would identify herself as Pakistani – “never American-Pakistani”.

When I’d call Sara after returning from Pakistan, she’d be eager to know what I did, where I went, whom I met. On my return in February 2020 – before COVID-19 – I flew back from Islamabad, having recently visited Lahore where Sara grew up and where I lived for a little over a decade in the 1990s. She was 23 when she left the city in 1976. I was just a little older when I moved there from Karachi in 1988.

Sara spent most of her adult life in America but made frequent visits to Pakistan, until health issues prevented her travel back. Her last visit may have been at the Second Karachi Literature Festival in 2011, guesses her sister Tillat, younger by five years.

There’s a recording of the event online – a more filled-out Sara than the gaunt one I know reads from her chapter on older sister Ifat from her iconic book Meatless Days.

Walking across the Charles River bridge on a cold February afternoon, I called Sara. With COVID rampant, meetings were impossible. Over the landline – she had stopped using her cell phone – I sent her the fragrance of the Lahore spring and nargis flowers.

In September 2020, Sara sold her Boston apartment and transplanted the contents to Bellingham, a suburb of Seattle. She made it a point to call before leaving. There’s a finality about the goodbye. Who knows when we’ll meet again.

It’s a big move but she could now be near Tillat in Vancouver, Canada, an hour-and-a-half drive away. They were excited about being so close to each other. Tillat could visit Sara in Boston only a couple of times a year.

There’s no way of knowing when the pandemic will end or for how long will it drag on. Soon after the move, the borders closed again. Sara and Tillat were so near and yet so far.

Since the border reopened last summer, Tillat could be with Sara every week for several days. Comfortingly, she and other family members were by Sara’s side when she took her last breath at home on March 20. She was 68.

It was Asma Jahangir’s passing in Lahore that brought me close to Sara Suleri in Boston.

Sara, says Tillat, “actively sought the company of Pakistani women”. The observation echoes the first line of Meatless Days: “Leaving Pakistan was, of course, tantamount to giving up the company of women.”

It was at our mutual friend Dr Sughra Raza’s apartment in Boston by the Charles River that Sara and I had met in passing some years earlier. Sara lived upstairs in the same building.

Since her husband Austin Goodyear’s death in 2005, Sara had been talking about moving to be near friends after retiring from Yale. She was visiting Sughra in Boston when Sughra mentioned that an apartment on the floor above was for sale.

“I’ve bought it,” Sara announced when Sughra came back home from work that evening.

They had developed a close friendship since their first meeting in Cincinnati in 1991 at the home of Dr Azra Raza, Sughra’s older sister, an oncologist and writer who hosted an Urdu Mehfil series at home. She had introduced Meatless Days to all her siblings.

“Someone has said about two writers meeting, that they looked at each other and in the reflection of their eyes saw their own identity,” Sara would say later.

The effervescent Sara they knew was different from the tall, ghostly, quiet, somewhat intimidating presence I first encountered at Sughra’s place. Later I would be privileged to discover for myself the “warm, sensitive and brilliant woman, delightful person and genuine friend”, as historian Ayesha Jalal described her in an email from Lahore.

For now, I’m too embarrassed to tell Sara I never finished reading Meatless Days. The cover features the photo of a beautiful woman, elegantly dressed in a gharara, a tika on her forehead. She’s looking down at a little girl holding her hand. Sara’s older sister, Ifat, was run over by a car.

The horror of that tragedy transcends time. It’s at the heart of Meatless Days Sara’s elegant, personal-political memoir, first published in 1989, that I finally read a few years ago. She presented me with a copy of the recently published edition, painstakingly signing it with her left hand, her writing hand immobilised by a fracture. Later, a botched surgery damaged a nerve. She hoped she’d soon be able to write again, but that never happened.

She signed another copy for our journalist friend Raza Rumi, who visited Boston for the Asma Jahangir memorial we’d organised. Unlike flighty me, he read Meatless Days at the age of 19. He re-read it several times for its “literary magnificence as well its resonance for dislocated Pakistanis”, he said. “Her wit, one-liners and totally unique way of looking at the world never stopped amusing and inspiring me.”

After Asma’s sudden departure on February 11, 2018, it seemed everyone wanted to come together to mourn and celebrate her. Raza connected me with some young Pakistani lawyers at Harvard who wanted to pay tribute to Asma. More friends joined us.

Also read: ‘Thinking With Ghalib’: A Book for a Time When Multi-Religious Thought Is Under Attack

Unexpectedly, Sara reached out to me. She wanted to participate. Given her generally ill health, I was apprehensive. Could she do it, would she be able to address a large gathering?

Asma’s memorial took place on Saturday, February 17, 2018, at Weiner auditorium, Harvard Kennedy School. Sara arrived as the hall filled up. She was in a wheelchair, attendant in tow. She sat quietly listening to the other speakers – Amartya Sen, Ayesha Jalal and other luminaries. Then she stood up and walked slowly to the podium.

So sad to hear that #SaraSuleri passed on last night, at age 68. Here she is speaking at the rememberance for Asma Jahangir we organised at HKS in 2018. Loved her brilliant memoir "Meatless Days" – great insights into #ZiaDarkYears #Lahore pic.twitter.com/pghy6WGJ6o

Despite her frailty, she held the audience riveted with anecdotes drawn from her long association with Asma in Lahore. There were poignant pauses and audience laughter. She spoke of Asma’s sincerity, courage and authenticity – traits that applied equally to Sara herself.

“I was a bit airy fairy, and Asma would tell me to put my feet on the ground – I am walking on the ground. And that is exactly what I needed.” The laughter was fitting, given how much fun Asma was. That too is something they had in common.

A couple of years later, she hosted a mehfil at her Boston apartment to discuss the book she co-authored with Dr Azra Raza, aiming to introduce a generation to the joys of Ghalib. For a year-and-a-half, they worked on the project together, they were “joined at the hip”.

A tribute to Ghalib: 21 Ghazals Reinterpreted (Penguin-Viking 2009) is the second title, after the first one went out of print. “I preferred the first one, Epistemologies of Elegance, because it was mine,” said Sara, drawing laughter.

Azra said the two people who have impressed her the most in her life are women, Sara Suleri and another writer Qurratulain Hyder in India, both with much in common. She tried her best to get them to meet but Sara didn’t get the visa.

Beena Sarwar is a journalist, artist and filmmaker currently based in Boston. She tweets @beenasarwar. This is a Sapan News Service syndicated feature.