It is a long overdue book that has come at an important period in Delhi’s development.

Ranjit Sabikhi, the author of the book, A Sense of Space, The Crisis of Urban Design in India, belongs to that generation of architects and urban designers who have witnessed the transformation of the Indian city from the years immediately after Independence to the mega metropolis that we now inhabit. In New Delhi, his city of residence for the last six decades, Sabikhi has, through both the written word and the built work, drawn from and commented on, the complexity of India’s historical and contemporary urban agglomerations.

While the duality of being both a consumer and producer of architectural and urban space would qualify him as an insightful commentator on the development of Indian cities, his book too both aligns itself with monographs that are often published on the works of architects and distinguishes itself from them in both its content and structure.

At the outset, A Sense of Space, The Crisis of Urban Design in India is a book about key issues of urban design and development as they relate to Delhi. Key ideas in the book are illustrated through examples drawn from both historical structures in the sub-continent and from the architects’ own portfolio of projects. 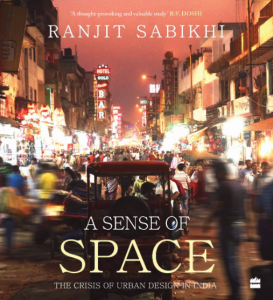 ‘A Sense of Space, The Crisis of Urban Design in India’ by Ranjit Sabikhi.

Bracketed by an introduction and a conclusion, that set the pace and lay the groundwork for his arguments, it ends by means of making definitive recommendations and comment. The text is otherwise structured around the six themes of land, space in the Indian context, explorations in urban design, Delhi’s changing profile, Delhi’s specific issues and urban crisis.

The book begins by looking at the past as a means of informing the practice of the present. On reminiscing about the “loss of local culture in favour of a uniform set of values”, Sabikhi draws our attention to the loss of cultural diversity as witnessed in the land and the eco systems that it supports in favour of providing “equal opportunity and services to all.”

As an example, Sabikhi rightly points to the important relationship that a building establishes with both the physical and social culture of a place before introducing us to two projects undertaken by his firm i.e. The Oberoi Wildflower Hall at Mashobra (1996) and the Taj Bengal in Kolkata (1985).

The two chapters, Space in the Indian Context and Explorations in Urban Design were a delight to read. Lucid text was supported by photographs and drawings of projects as diverse as the Yamuna Apartments Housing Scheme in New Delhi (1973) and the Mughal Sheraton Hotel in Agra (1974), both from the architects own portfolio. These buildings were juxtaposed with examples ranging from historical structures and projects such as the Surya Kund at the Sun Temple, the Modhera Complex, Datia and Amber Forts, the Meenakshi Temple in Madurai to relatively more contemporaneous projects like colonial New Delhi and post colonial Chandigarh. The text in these chapters illustrates not only the principles of urban design and planning but also  their adaptation for a country that in the years immediately following Independence in 1947 had very limited financial resources. Sabikhi importantly also establishes the much contested binary of western versus eastern ideas of urban design, the homogenising effects of industrialisation and the new found reality that architecture has become a response to the rhythms of the real estate market that are at the best of times only “somewhat guided by developmental controls”.

Changing a human habitat into an economic construct

Pertinently, the author laments the supplantation of the spaces between buildings, which are often centres of greater human activity than the buildings themselves, with indifferent infrastructural grids such as networks of transportation. By conceiving of cities as a series of overlayed infrastructural grids we witness the city transforming itself from essentially a human habitat to an economic construct which draws our attention to one of the greatest conundrums facing the contemporary Indian city – the relationship between the city as a product of formal planning devices and the “informal” systems of habitation that fill the lacuna within them, and by extension, without explicitly saying so, asking the question whose city do we design for?

The polarity of formality and informality on the one hand, and the conundrum whether the city is primarily a habitat or an economic construct on the other, has come to define the dominant paradigm that is informing a developing attitude towards not only our modern architectural heritage, but also an attitude towards the country’s historical cities and its city centres. Should we look at the “defining buildings” of the near past as cultural assets, punctuation marks in a historical script or as purely economic assets?

In his book, Sabikhi regrettably steers clear of commenting on other large urban design projects such as the redevelopment of the central vista precinct in New Delhi, the Sabarmati River front redevelopment project in Ahmedabad or the Kashi Vishwanath Temple precinct redevelopment in Varanasi. For an audience with a developing interest and understanding of both architecture and urban design, Sabikhi’s comment and critique of these and other similar projects across the country would have broadened the scope of the text to more accurately reflect its title, A Sense of Space, the Crisis of Urban Design in India.

The subsequent two chapters, Delhi’s Changing Profile and Delhi’s Specific Issues are as insightful as they are informative. Whether through the tracing of the development and components of Delhi’s various master plans or commenting on the role that the Delhi Development Authority (DDA) has played in the development of the city, they situate and illustrate the current reality of the city as a consequence of both planning decisions and indecisions of the past.

As described in the book, whether one subscribes to the arguments of centralisation versus decentralisation of commercial activity in the city, or the re-structuring of the city on the basis of high density developments along mass transport corridors, the role that “single – use zoning” and “setback laws” have played in defining the everyday urban experience of the city or other such urban design concepts, there is no denying the need for an authoritative voice to take what could otherwise have been a dreary, jargon laced text fortified with dry statistical urban data into an accessible, comprehensible and enjoyable read. In doing so, the book introduces to Delhi’s citizenry the urban development policies that have shaped their city. With repeated references to the 1961 master plan and constant reminders that formal planning did not keep pace either with the extent of migration and population growth or its effects on urbanisation, Sabikhi articulates and challenges the relationship that land development agencies established with the sanctimony of Delhi’s master plan. Recognising and regretting, the elasticity through which such documents have been viewed and the often arbitrariness through which land use and FARs (floor area ratios) have been manipulated, Sabikhi constantly refers back to the intrinsic nature of the city as a habitat and the critical role that sensitive urban planning and design can play in preparing it for the challenges of the future.

Also read: Louis I. Kahn: The American Architect Who Pursued His Passion as an Art

Considering the dynamic nature of cities, the mechanisms that influence their growth need to be equally agile. Specifically, in the case of Delhi, modern day urbanism is defined by the relationship established between both the “formality” and “informality” of urban systems and the multiplicities that are a product of this relationship. The schism that occurred on account of the formality/informality dichotomy has resulted ironically in an authentic and indigenous form of urbanism, that is independent and often at odds with the tools and policies that were to define it.

Through an analysis of key locations and components of the city (Connaught Place, Nehru Place, the effects of a transport-oriented development), the book describes what Delhi is and what Delhi could have been. While arguably, Indian cities can broadly be categorised into those whose antecedents were either mercantile (Bombay/Mumbai), cantonment (Bangalore/Bengaluru), religious (Madurai), administrative (New Delhi), etc. – each now is a collage of attributes that can be found in the other such urban agglomerations.

While cities across the country have developed within the broader umbrella of Indian urbanism, they undeniably have their own unique forms of expression, complexity and identity. The book, which uses Delhi extensively as a case study, would have done well to extend its scope to include not only projects from other parts of the country (as mentioned earlier) but also, to some extent an analysis of other cities in the country and their urban design strategies and guidelines.

In conclusion, Sabikhi proposes ten “urban sutras” for the currently under preparation Delhi 2041 master plan. While each of these would make a positive contribution towards the development of the city, the contribution that this book makes towards a greater understanding of urban design as an instrument of democracy, and public space as the space of democracy, lies elsewhere.

Through both the depth of insight and its extraordinary range, the book creates a common ground between the multiple stakeholders and the residents of the city. Its accessible language puts in historical perspective urban design and planning decisions that have given shape to Delhi. As part urban history, part architectural monograph and part projective text, A Sense of Space, the Crisis of Urban Design in India, makes an important contribution towards the growing literature on the urban design and planning of Indian cities.

It is a long overdue book that has come at an important period in Delhi’s development. It has pride of place on my bookshelves and I would recommend it to anyone interested in architecture and urbanism.

Rahoul B. Singh is an architect at RLDA Architecture Design Research.