Interview: 'We're Living in a World Where Utility Has Replaced Empathy'

In conversation with philosopher Ramin Jahanbegloo on his new book, the process of 'decivilisation' and where we go from here.

From a Clash of Civilizations, the global dialogue has moved to the fragility of civilisation as a concept in of itself. In a world where politics is influenced by actors such as ISIS or politicians like the US President Donald Trump, it seems difficult to understand what precisely keeps societies together and how they can communicate.

This is what makes the new book The Decline of Civilization: Why We Need to Return to Gandhi and Tagore, by the philosopher Ramin Jahanbegloo, so timely. He talks of how the essence of “being civilised” is dependent on a public relationship that is inclusive and accepting of differences, and the breakdown of these qualities has led to a process of “decivilisation”.

He spoke to The Wire about some of the key issues discussed in his new book.

Is there really a universally-accepted meaning of the word “civilised”?

Not necessarily. There has always been a great deal of ambiguity in relation with the two words “to civilise” and “being civilised”. The French author [Michel de] Montaigne uses the word “civilise” in the 17th century as having a “manner”. As for the French philosopher [René] Descartes, a “civilised” man is someone who is not a “savage”. As such, the term “civilisation” [works] as a sense of distinction, but also as a term which enabled the Europeans to redefine and reformulate their own frameworks of socialisation and human development. As such, the West has always related the idea of civilisation to that of progress, advancement, comfort, increased material possessions and cultivation of the arts and sciences.

In other words, as Swiss literary critic Jean Starobinski says correctly, the crucial point is that the use of the term “civilisation” was used to describe both the fundamental process of history and the end result of that process established an antithesis between civilisation and a hypothetical primordial state that was called savagery or barbarism. So it depends on our reading of history as a process and its end results. The ancient Greeks considered the Persians as “barbarians” because they were incapable of speaking Greek and living in city states. As for the Persians, they thought of the Greeks as being not civilised enough to run an empire like the Achaemenid Empire.

As Hegel shows in his monumental dialectic of the master-slave relationship, Phenomenology of Spirit, a strong and meaningful sense of recognition of oneself as the result of a struggle with the Other constitutes the indispensable foundation of freedom in human history. Therefore, full understanding of the process of freedom-making necessitates a civilisational acceptance of the Other as the Other. This is what is lost in today’s world, not only at the level of political leadership, but also at the level of citizens who lack more than ever an idea of “shared humanity”.

As Steven Pinker points out, statistically war and violence as an experience of humans has gone down tremendously in the last few centuries, people live longer, healthier lives, poverty is being dealt with, how is this evidence of decivilisation?

It would be wrong to analyse the problem of violence at the level of statistics. Violence is a mode of thinking and a mode of acting. We need to fight the capital punishment as a mode of thought rather than as a statistics. The same for rape of women in India. If rape exists it is because of what I would call “penis politics”, a bunch of male-chauvinist bureaucrats with ties teaching others how to run the society and the world, and trusting statics. We are dealing here with a hierarchical mode of thinking, which is thoughtless, because it looks at itself and others in bureaucratic terms. As a result, what we call “well being” is nothing but a mutilated life, because it has no true meaning to share with the other person or the other nation. The question of “utility” is the regulating idea which has replaced the idea of “empathy”. This is a decivilising process that I experiment on an everyday basis with my students who want to become corporate lawyers.

Can we really call the Greeks civilised given how deeply their politics was enmeshed with slavery? Is it possible to compare the term “civilisation” across centuries?

I think we should distinguish between the Athenians and the Spartans when we are talking about the Greeks. Also if we are referring to the art of politics and the art of education in ancient Greece, our references would be more correctly in the direction of Athens in 5 BC. For many, Athens in 5 BC is a model of civilisation and democratic life. However, Athens is also a male-oriented society which like many other societies in antiquity related slavery to war. Men were not sold as slaves in their own societies. Therefore, war was the chief source of the slave-trade.

However, modern slavery is more essentialist than war-oriented. In that sense, what should be said is that civilisation displays an extra-narrative ground to the plurality of historical discourses and cultures. The long interaction of historical civilisations with the complex issue of violence singles out the concept of empathy for particular attention. The violence embedded in the making of historical civilisations is epistemologically reframed and ontologically tamed by the empathic vision of civilisation. Violence on that level, therefore, calls for civilisational analysis. The historical incapacity of violence to generate mutual understanding and a possibility for a common horizon of shared values reaffirms the necessity of an alternative meaning of the word ‘civilisation’ that resists easy equivalence with notions of evil, horror and cruelty. Civilisations were less or more empathic through history. However, for the first time in human history, empathy is no more part of our civilisational upbringing. We live together without knowing why we live together. 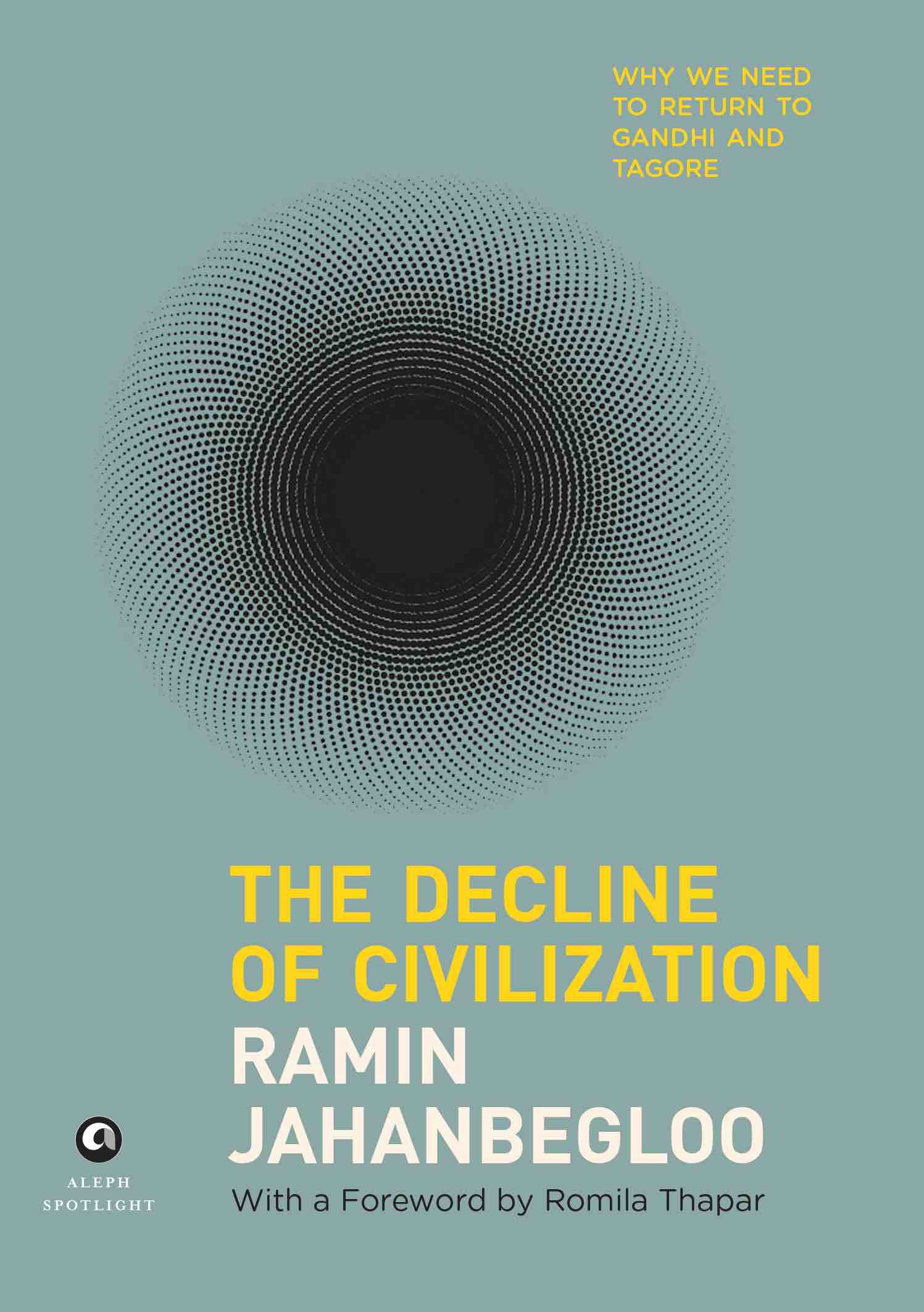 Ramin Jahanbegloo
The Decline of Civilization: Why We Need to Return to Gandhi and Tagore
Aleph Book Company, 2017

How is Mahatma Gandhi’s idea of civilisation different than European, modern views?

As a radical critique of modern civilisation, Mahatma Gandhi created a legacy that is the fountainhead of a new empathic cosmopolitanism and a pluralistic and multidimensional approach to the concept of civilisation. Gandhi insisted that civilisation must grow and develop in a relationship of constructive exchange with the existing conditions of people. As a result, he condemned what he considered the two fallacious maxims of Western civilisation: ‘might is right’ and ‘the survival of the fittest’. Gandhi’s civilisational approach to the central values of human dignity and equality and his multi-centred and civic view of democracy are based on three basic tenets: that ‘all knowledge is partial or corrigible’, that ‘men see the world differently’ and that ‘violence denied these fundamental facts’. As such, Gandhi’s open-ended view of civilisation is an empathic temporality and an alternative cosmopolitan sensibility that is critical to the two ideas of ethics and politics. The Trumpisation of politics in today’s world makes the Gandhian view of civilisation even more relevant.

Rabindranath Tagore, you write, gave up on the ideas of institutions and looked towards hospitality and individual expression; but without strong institutions, individuals will be crushed by the mob.

Institution is not an everlasting process. Institutions are not created through a natural rationalism or through historical determinism but are instituted through creation and social imagination. On this issue, I follow the theory of my mentor Cornelius Castoriadis. For Castoriadis, society is an imaginary ensemble of institutions, practices and beliefs that we all subscribe to and thus unconsciously reproduce.

So in case of Tagore, giving up some political institutions does not mean that he gives up the social imaginary of the institution, which he actually considers as an ethical and spiritual enterprise rather than simply political. Tagore aims towards an intercultural orientation of a dialogical praxis. It goes without saying that this dialogical praxis is increasingly central to contemporary democratic theory, chiefly due to the fact that we live in a diverse world that is unable to accommodate all cultural virtues and values into one life. It is, therefore, imperative that members of different cultures engage in critical intercultural dialogue whereby they try to understand each other before indulging in the criticism of cultural practices which they find offensive. In a world of Trump and ISIS, reading Tagore is an ethical and cultural necessity.

You write, “Like civilization itself, politics has become aimless and meaningless,” but is this true? In the age of authoritarian autocrats, politics has great meaning.

Politics has become meaningless in today’s world: both on the side of the leaders and the citizens. The desire to turn citizens into unquestioning, unaccountable and servile human beings has become the principal motive for the development of politics in the contemporary world. The rise of populist politicians around the world is harbinger of a worrying trend: zombified populations are marching to the order of big mouth demagogues, with little respect to or comprehension of the political process and practice.

However, the rise of the demagogues is the symptom, not the cause of erosion of public trust and engagement. It can be said that citizenry is only realisable through active participation in the public sphere. Therefore, divisive politics that pushes citizens into small bubbles and preaches nativism contributes to the decline of citizenry. But what is often lost in a political debate is the role of politicians as agents to transform the public discourse and move the society toward innovation and inclusiveness. A brief look at contemporary politics reveals that most shameful eras of our history are coincided by periods of divisive politics which often have contributed to violence and war.

Let me just add that, without politics as the art of organising the society and not just power making there is no real citizenry as becoming of individual is contingent upon their relation with others. As [Immanuel] Kant puts it engaging and diverse viewpoints enrich and inform our political modes of relating with others, as without plurality of “being with others” we cannot liberate our mind from [the] darkness of ignorance. On the other hand, individuality cannot be realised without the ability “to analyze and think for self” or as what Kant’s famously defined as enlightenment “the human being’s emergence from his self-incurred minority’’.

Lastly, what gives meaning to civilisation if life itself is a matter of chance? Such meaning can only be subjective, and thus atomised. Only a belief in eternal ideas would allow for such meaning to develop and that, as [Friedrich] Nietzsche remarked, is dead.

Most, if not all, living civilisations change and evolve over time. No civilisation constitutes a hermetically-sealed ensemble. The boundaries of a civilisation may change as it encounters other civilisations. This is actually how it has been all through human history. In that case, critical intercivilisational dialogue could lead to change where the process of dialogue and transvaluation of values replaces that of coercion and manipulation. When it is done in this manner, the partners in an intercivilisational dialogue end up engaging in a process of questioning rather than intimidating or patronising each other.

It is clear that only an open-ended, hospitable and empathetic dialogue, which takes the Other seriously, can be termed a genuine intercivilisational encounter. This is the whole difference between a Las Casas and a Sepulveda. As the past 600-plus years of Western history have demonstrated, the sacralisation of the idea of civilisation and its enforcement beyond the borders of the West was accompanied by a decivilising zeal which dismissed other perspectives and visions of the world through conquest and domination. As a result, the project of unique civilisation has brought us to its opposite: a decivilising society, where violence, fear and the logic of bellicose truth have the last word. Today, unfortunately, we are closer to a one-dimensional idea of civilisation, expressed in decivilising terms, rather than to a genuine inter-civilisational humanity with a shared understanding.