In Panjab: Journeys Through Fault Lines, Amandeep Sandhu provides us with a panoramic view of Punjab, taking us along in his journey of piecing together the land Ibn Battuta had named ‘Panj Ab’ – the land of five waters.

The author begins this non-fiction verse with a Punjabi couplet, ‘Je ho ji tu samjhe mahiya, oho ji main hain nahin (What you know of me, my dear, I am not that)’ by Aman Rozi. The couplet lays bare the idea that unravelling the geographical, political, economic and other facets of a place can always be an enigmatic experience.

The land in question has been fought over, won, ruled and divided many times and to understand it, one cannot only talk about the Indian side of Punjab that exists today but view it as a fragment of the huge land that existed decades ago.

Each facet of Punjab’s reality has been picked by the author and detailed in the sixteen chapters. The narrative flows from historical facts to the author’s personal history and merges with the reality experienced by him during his travels. The kind of data that has been collated and segregated by Sandhu into various chapters is staggering. We can read each chapter individually, but reality overlaps and similar issues fluidly emerge in other chapters also.

The thought of Punjab is evocative of yellow mustard fields and the Green Revolution that was a boon for many in its initial years. However, soon the greenery faded and the income from farming decreased. Sandhu compares his mother’s illness with Punjab and talks about the two ‘mis-revolutions’ that the state faced – Green Revolution and Khalistan. Green Revolution was promoted with new researches being practically implemented on the farms, but many failed.

The Indian government also tried to solve the issue of militancy and the demand for a separate land, Khalistan, in myriad ways. Instead of offering any solace, all the attempts made the wounds much more deep-seated.

These small ‘band-aid fixes’ that the government was providing for both these problems were not permanent solutions. Punjab was more than just its fields and the guns picked up by some but nobody saw the entire picture. 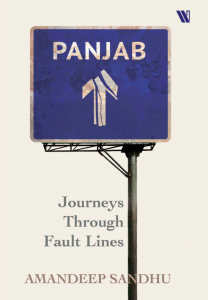 The political scenario of the state is discussed after every few pages because no history is complete without mention of those who have been in power. Each of the parties that have aspired for power or have been in power has been talked about. Apart from the Akalis, Congress and BJP, Sandhu also looks at developments surrounding the Aam Aadmi Party.

He also touches upon the various gurus and deras that exist in Punjab who also regulate the vote bank. People blindly follow these cults and when urged to vote for a certain party, they do as asked. There have been moments in the book when one is terrified by how callous politicians have been and how they have trampled the truth and built their empires on the corpses of the farmers, the unemployed youth and the Dalits.

No book about Punjab is complete without talking about Operation Blue Star. The attack on the Darbar Sahib in 1984 shook the Sikhs around the world and remembering it brings back painful memories of the time when the state thought it was acceptable to attack a place of worship.

The attack, as has been mentioned in the book, was planned months in advance with a model of the Darbar Sahib prepared for the army to practice in. The narrative portrays the atrocities by the state and also gives an account of how Jarnail Singh Bhindranwale rose to prominence along with Harcharan Singh Longowal.

A recurring problem that has time and again risen and played with during election campaigns and in politicians’ rhetoric is Punjab’s drug addiction. The book details the history of how the problem took root and has now spread to all parts of the state engulfing its youth in a never-ending cycle of drug addiction.

The medical facilities available in the state are not sufficient. Apart from drugs, the lack of resources and a reliable state support system for the farmers has instigated farmer suicides for the past few decades. Punjab is no longer the land where five rivers flow intensely. The rivers are now home to sand mining activities, industrial waste and bodies of people who have died by suicide.

The chapter on Dalits is significant as it brings to the fore the irony of the word ‘Dalit’ in Sikhism. Around 55–60% of the state’s population comprises of Sikhs. Sikhism was initiated by Guru Nanak Dev with the spirit that no caste system would be prevalent in the religion like it had plagued Hinduism. It was supposed to be a humanitarian religion where anyone who embraced it would be considered equal.

However, the reality was considerably different from that. There are separate gurudwaras for the Dalits. The Jutts in Punjab have devised ways to subjugate them and would go to any extent to use them and the reservation the Dalits get for their own means. This has been substantiated in the book with reference to various instances that have taken place in the past and unearthed through the interviews taken by the author during his journey through the fault lines.

The book touches upon the disappearances, incidents of sacrilege that brought the state to a boil, the various farmer protests such as the ‘rail roko’ protest, the stories from various villages about the past and the present. Sandhu’s travel brings to life the various issues that political parties keep trying to bury from time and again.

The book offers both a historical and a contemporary perspective of Punjab tracing the journey of the state from centuries ago. In the epilogue, Sandhu mentions how the people of Punjab who have seen ‘one generation lost to militancy, the next to drugs, and the present to exodus—are looking for new directions, new voices and new leadership’.

Guneet Kaur Gulati is an editor at a publication house and is interested in literature and the South-Asian socio-political discourse.