Where regimes seek to divide, the language of poetry helps break free. 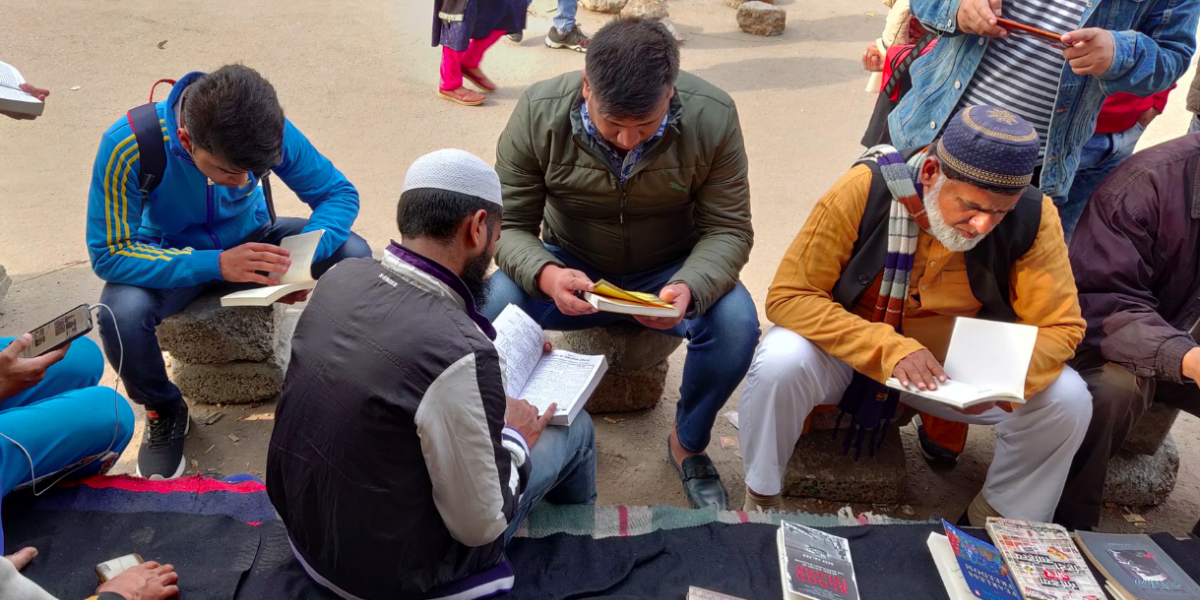 There has been considerable anxiety, anger, angst and agonising about the role language plays in contemporary times, and in the dark times.

Language is under attack when used in certain ways in the university and academia, on the streets and in polemics. It is also under scrutiny when used in and as poetry. As though poetry – ‘which makes nothing happen’ (W.H. Auden) – would overthrow regimes, incite people and shred nerves. But why are we afraid of a mere poem?

When poets sought to channelise public outrage or personal anguish into words, poetry was a genre that appealed to them, for various reasons. It was crisper, shorter.

It was not easy to decode and meanings in its compressed sentences, involved myths and convoluted syntax, and so hidden meanings about protest in the form of metaphors were not visible at first.

One had to work with the text – and we all know the people in power, when they do read, rarely have the time for this. But the question for us readers is: how do we see meanings like ‘dissent’ or ‘freedom’ or ‘resistance’ in poetry written for and within contexts as diverse as racism and civil rights in the USA, totalitarianism in the USSR, the freedom struggle, the French Revolution and 18th century British monarchy’s excesses?

The protagonists, when identifiable in poetry, are different, the victims and perpetrators different and the contexts, radically divergent. Ostensibly. Yet symbols of oppression or protest, freedom and aspirations in poetry seem to work across continents.

Literature is the hunger for Otherness, as diverse critics from Geoffrey Galt Harpham and Martha Nussbaum to, more recently Ranjan Ghosh and Hillis Miller have argued.

When we read, we seek to enter the lifeworlds of Others, other characters and their lives. The Other lifeworld is the exotic, which by definition is distanced and distant from ours and is best consumed detached from its original contexts. The literary as exotic enables us to encounter the Other world, but without the messiness of living in it. Thus hunger for the Other is not limited by geocultural boundaries: in fact, quite the opposite, it is a hunger for cross-cultural solidarity.

Cross-cultural solidarity that enables us to bridge different historical circumstances is possible, if we read ethically, as argued elsewhere. To read the suffering of the Other in literary texts, and in certain ways, is to be hungry not only for accounts of suffering but hungry for an end to that suffering.

Like the Ancient Mariner’s guest who wakes up sadder and wiser after the consumption, via listening, of the Mariner’s tale, the hunger for the outsider ought to engage with the Other’s suffering. Even aesthetic norms of specific cultural forms are ignored in our quest for Otherness, producing then an ethical aesthetics. For a cross-cultural solidarity to occur via aesthetics, the latter must be consumed as ethical aesthetics, unrestrained by its ‘original’ context but infused by it.

Thus, Holocaust texts, slavery narratives, and trauma texts from Rwanda may be read with a degree of fidelity to their origins but need not be restricted to them.

Reading literature is an act of deviance then, travelling away from originary aesthetic norms of the text, as Ghosh puts it: ‘Becoming aesthetic owes to sahitya’s ability for deviancy, detouring competencies in the form of an “imposed aesthetic” or trained habits of aesthetic response’.

Reading as deviation and detour  enables us to slide across geocultural formations. Reorganising the reading of Otherness could possibly be transcultural when, for instance, we practise an aesthetic that maps, for example, forms of dehumanisation across contexts to see dehumanisation, as a global condition (what Michael Rothberg would pioneer as ‘multidirectional memory studies’. And yes, yes, this reinstates to a considerable measure the old ‘universal’ nature of the literary.)

But peace, like a poem,
is not there ahead of itself,
can’t be imagined before it is made,
can’t be known except
in the words of its making,
grammar of justice,
syntax of mutual aid.

With the above sense of literature-as-deviance-and-detour in mind, it was intriguing to see Poetry Foundation’s collection, ‘Poetry of Protest, Resistance and Empowerment’. The assortment of poems cut across numerous contexts and cultures, and yet, they made sense even though, in a few cases, one had to look up a historical reference or two.

Partially illustrating how tropes of oppression, protest, suffering and hope can emerge from very different spatio-temporal contexts we can skim through some of the poems here.

There was on the site, Langston Hughes who in ‘I look at the World’ writes

I look at the world
From awakening eyes in a black face—
And this is what I see:
This fenced-off narrow space
Assigned to me.

I look then at the silly walls
Through dark eyes in a dark face—
And this is what I know:
That all these walls oppression builds
Will have to go!

If Hughes was speaking of walls of oppression, another text in the collection pointed to the walls that are blackened with the sorrows and blood of the oppressed. Here are William Blake’s lines from his astonishing ‘London’, from the 18th century:

the hapless Soldiers sigh
Runs in blood down Palace walls

The radical poet of 18th century England speaks to us alongside Hughes from 20th century racially segregated America, employing the same trope of the wall.

Claude McKay in ‘America’ would describe his country as feeding him the ‘bread of bitterness’, but admits he ‘loves this cultured hell’. And then proceeds to tell us how he stands with respect to this nation:

Yet, as a rebel fronts a king in state,
I stand within her walls with not a shred
Of terror, malice, not a word of jeer.

Within America’s walls, this is how a citizen stands.

James Baldwin in ‘Staggerlee Wonders’, deeply critical of the exclusionary policies that run his country, is caustic about how white America worries about China, Vietnam and planting a flag on the moon, but does not honour any treaty anywhere in the world:

They have hacked their children to pieces.
They have never honoured a single treaty
made with anyone, anywhere.
The walls of their cities
are as foul as their children.

So much for walls across time and space. And, not on the website, a poem that resonates throughout India since the early 20th century, also gives us the oppressive wall, the metaphor of restricted freedoms and the prison, in the lines of Gurudev himself:

Where the mind is without fear and the head is held high;
Where knowledge is free;
Where the world has not been broken up into fragments by narrow domestic walls;
Where words come out from the depth of truth;
…

Where the mind is led forward by thee into ever-widening thought and action
Into that heaven of freedom, my Father, let my country awake.

The freedom to transcend walls, to not be limited, is the aspiration of a nation, says Tagore.

Or, look at how Anna Akhmatova’s justly famous Requiem ends, at a wall, imposing, unmoving, behind which many loved ones have disappeared forever  :

I pray not for myself alone,
but for everyone who stood with me,
in the cruel cold, in the July heat,
under the blind, red wall.

This is the wall at which people wait for their loved ones.

Shifting the trope slightly, but continuing with the image of a lock-down, a carceral and an immobility regime is Maya Angelou’s legendary ‘Caged Bird’:

a bird that stalks
down his narrow cage
can seldom see through
his bars of rage
his wings are clipped and
his feet are tied
so he opens his throat to sing.

And Angelou’s bird sings of what else but…freedom :

The caged bird sings
with a fearful trill
of things unknown
but longed for still
and his tune is heard
on the distant hill
for the caged bird
sings of freedom.

So many walls, from America through London and Russia to Egypt and India. Capturing oppression, resistance, resilience and employed as a trope, the wall or the cage, is a potent transcultural sign: it tells us of Others whose lives are led (and end) within immobilising walls.

If Tagore and Angelou speak in their poetry of life beyond the walls that enfold, secure and limit them, Constantine Cavafy goes further, and wonders why we never protested when the walls were being put up. Here is Cavafy in ‘Walls’:

Without consideration, without pity, without shame
they have built great and high walls around me.

And now I sit here and despair.
I think of nothing else: this fate gnaws at my mind;

for I had many things to do outside.
Ah why did I not pay attention when they were building the walls.

But I never heard any noise or sound of builders.
Imperceptibly they shut me from the outside world.

Like the German pastor Martin Niemöller’s famous lines – Niemöller’s lines are engraved at the New England Holocaust Memorial Museum in Boston, USA, having deviated from its origins to energize the imagination of visitors elsewhere – about the one who never protested when various people were being taken away  (‘first they came for the socialists…’) so that when his turn came there was no one to protest, Cavafy alerts us to the risk of not resisting – and with the metaphor of walls.

Each of the poets here was dealing with a specific cultural context, from civil rights to the anti-colonial struggle. They all found the image of walls, walling in, plastic enough – strange, for inflexible walls – to employ.

When we read Blake or Cavafy, we see in our mind’s eye, an abstract human, incarcerated, yearning for justice and freedom. The incarcerated are the exact opposite of us readers, who are free to read, to roam. The freedom to read Literature is the freedom to know about Others who are unfree, albeit in different conditions of immobility. The study of Literature and poetry has never been more urgent than now.

Just one poetic trope across centuries and contexts reminds us that people behind walls are not always secure: often they are immobilised with terror.

The language of poetry, when speaking of immobility regimes, breaks free.