Poetry from the Ghettos and Why we Must Read Them

What one ought to worry about is not that these poems may be forgotten, but rather that their images are so flagrantly resonant even today. 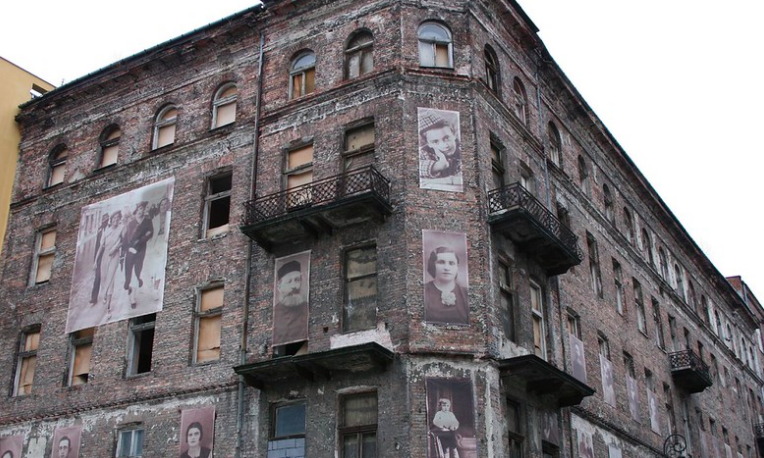 One of the few standing buildings of the old Jewish ghetto of Warsaw, now a place of remembrance. Photo: Juan Antonio Segal/Flickr (CC BY 2.0)

In a pithy account of poetry from the Holocaust, the editor of a significant volume of this verse, Marian de Vooght claimed that the poems ‘wrestled with the incomprehensible reality its writers were facing’.

She argued that sharing their pain, while being uncertain of their future in the concentration camps, was the primary purpose of the poets. The poems, she notes, survived, the poets very often did not.

Reading Holocaust or Nazi memoirs , or the poetry of resistance and hope, as we have seen, produces reflections on our time.

While contextually distant, ostensibly, they do provoke us to ask: are the conditions under which such poetry was originally written returning in some form? Are freedoms at stake? Is language suspect? Is hate speech becoming acceptable? And are ghettos returning?

Many of these questions occur in Yiddish and Polish poetry written in conditions of siege: in ghettos and concentration camps.

Frieda Aaron’s Bearing the Unbearable: Yiddish and Polish Poetry in the Ghettos and Concentration Camps (1990) and Carolyn Forché’s Against Forgetting: Twentieth-Century Poetry of Witness (1993) are, in fact, companion pieces, with some shared grounds of terror and suffering.

To go through these volumes is to peep into a psychobiographical history of the events and conditions in which citizens were surveyed, surveilled, identified, targeted, excluded from the category of ‘citizens’ and then eventually from the category of the human itself. Friends no longer remained friends as racial, ethnic and other hierarchies intervened and social relations, like citizenship, were defined by which community one belonged to.

Władysław Szlengel – a poet who was incarcerated in the notorious Warsaw Ghetto, and died there – in ‘Telefon’ puts it well:

And so I thought: let me call
someone on the other side,
when I’m on telephone duty
in the evening-

Suddenly I realized: by God –
there is actually no one to call,
in nineteen thirty nine
I turned a different corner –

Our ways have parted,
friendships have sunk in a swamp
and now it’s plain to see-
here is no one I can reach.

The political situation and the ideological barricades that stem from it, had divided people, friends, neighbours.

The ghettoisation is an incremental process: the gradual elimination of certain people from the ambit of citizenship, their reclassification as ‘enemy of the state’, ‘illegals’, and their dehumanisation. Poets have captured the forced marches and displacements away from their regular habitation to ghettos and camps, from Warsaw and Lodz to Auschwitz and Buchenwald.

Those selected and identified as ‘outside’ the pale were initially led to believe that there are no detention camps, no ghettos: even, on occasion, that they are being sent to safe places. Many were simply reconciled to getting away from the daily insults from their neighbourhood, so that when the trains (the cattle cars) came, says Władysław Szlengel in ‘Counterattack’:

Peacefully they walked to the train,
Sick and tired of the daily battle…

Then here is an example of how the illusion of a safe destination alters through the days of marching:

moved from Hoza Street to Street Sliska. In the pocket a bottle of vodka
and a chunk of sausage.
In carts, rickshaws, and wagons

a small valise and a chunk of bread, no other needs they had –
straight, straight in rows of five they marched through the streets.

the hand free but for water – and a strong pill.

This is Szlengel in ‘Things’.

One notes the gradual reduction in number and variety of ‘things’, markers of home, security and identity. The exodus, when it begins, has Jews with cartloads of stuff, and towards the end, nothing. Critics like Frieda Aaron read the above as a metaphor for the increasing constriction of the ghetto, but it could also serve as a trope for the reduction of a human into a category: deserving only of water and a poison pill. The stripping down of items of belonging to the minimum is a metaphor for the stripping away of identity itself.

Once inside the ghetto, that is all there is. It is a world in itself, a concentrationary universe which obeys no human or humane laws.

Those condemned to reside in the ghetto breathe poisoned air – although not in the same sense that those gassed did – and drink poisoned liquids. The trope of poison figures prominently in the ghetto poets. In Abraham Sutzkever’s ‘The First Night in the Ghetto’ we see:

Still hangs over my head raised above the void,
And from it black poison oozes drop after drop.

Sutzkever’s may be a lesser known image, but everyone knows Paul Celan’s famous ‘Death Fugue’:

Black milk of daybreak we drink it at evening

Black milk of daybreak we drink you at night.

Those still ungassed, drink poison. Other poets paint horrific images of camps, designed for maximum dehumanisation of the inmates. The images painted from that era will recall the photographs of refugee camps and slums, from India to Eastern Europe and Africa.

– and counts the last minutes

– and figures who soon will be released:

in the nearby chimney, lightly roasted souls
dance a spectral minuet with the black smoke.

…then crosses out the numbers, jots down some footnote:

The ‘Musselmen’ were a category of inmates so close to dying from disease and starvation, that they could barely stand, and took the prone position resembling a Muslim at prayer – thus ‘inspiring’ the Nazi wardens to term them ‘Musselmen’.

The lives of people in contemporary ghettos and camps may not have reached this extreme condition, but the signs of devastated lives are very much the same: stark poverty, absence of social welfare support, a terrorising state apparatus.

Elsewhere, Bau would describe the hunger that marks the inmates:

Flour coagulated into a loaf of cement –
condensed wages for a day’s torment -that’s bread.

Eight stomachs creeping through the eyes
divide it into eight even parts,
the exactness of each crumb;
– that’s the godhead
to which thought prays
behind the triple barbed-wire wall.
…and farther, farther, beyond the braid
of wires and torment, apparently a world exists.

Within the walls, only hunger exists – hunger marks the corporeal existence of the human. It is the human’s only reality. The poem concludes with the image of a world beyond the walls. The ‘apparently’ gestures at the impossibility of believing that there really is another world out there, one not defined by hunger, loss and pain.

The ‘concentrationary universe’ is ‘a place beyond the bounds of normality where “everything is possible” and is an “experience impossible to communicate,” yet “those very extreme qualities reveal a sheer fact of the living, in itself, brutal, entirely stripped of all superstructures’ (Michael Rothberg).

But what such a universe does is to also strip the inmates of hope, of belief in a world out there, from which, perhaps rescue may come.

Despite this all-pervasive intensity of the concentrationary universe, lullabies and songs used to keep the children minimally secure, emphasise hope. Much ghetto poetry deflects attention away from the conditions of living to conditions of possibilities:

Don’t rejoice, child, for your smile Is still forbidden us,

This is Shmerke Kaczerginski in ‘Hush Hush’. The metaphors suggest that natural settings such as rivers and the sun alone are untrammelled by wire fences and barricades and hence are free to shine. In ‘The Heart’s Voice’, Sutzkever writes:

The heart’s voice commands: believe
In the already desecrated word of justice.

Free yourself of the long lasting stigma. Death forgives every error,
Only slavishness it forgives not.

Perhaps exhorting the population of the ghetto to rise in revolt (the Warsaw ghetto uprising is a major event in Holocaust history), Sutzkever admits the world of justice is already desecrated but that ought not to stop the victims from rising against slavishness – that alone is unforgivable.

In another poem, ‘On the Anniversary of the Ghetto Theatre’ the same poet would say:

And as long as the outside is yours,
Ours is the ghetto here shall we lie
And from the divine heart knead a redeemer

And polish a tune..

Whether music and poetry are the sole signs of life and of resistance in such extreme conditions is a moot point, although Frieda Aaron declares that in the ghettos, ‘the domain of poetry was the front line of underground resistance’.

Sutzkever implies that composing music inside the ghetto is still a valuable act of agency and freedom. The outside may be yours, he says, but inside, there is music.

To compose, sing or even to talk in censorious times and the ever-widening concentrationary universe – which eventually will encompass a nation – is a risky proposition, as Paul Celan would write in a little-known poem, ‘A Leaf, treeless, for Bertolt Brecht’:

What times are these
When a conversation
Is almost a crime
Because it includes so much made explicit?

We know today what it means to read out poetry, cite philosophers or converse. Conversations are themselves forms of protest.

Tadeusz Borowski (who survived Auschwitz and Dachau and eventually gassed himself to death), worrying about the punishing splendours of nationalism, would say

We’re fed up of national colours!

The Polish flag will be striped!
The stripes, of course, are prison bars…

Borowski’s evocative symbolism presents nationalism and national symbols as eventually leaching the country and its people of freedom.

Eli Wiesel, Holocaust survivor, has claimed that the memoir-testimony is the genre most closely identified with the Holocaust. But does poetry also serve as testimony?

Examining poets like Charles Reznikoff, who used testimonies to compose poems such as Holocaust (1975) and Miklós Radnóti, the critic Sue Vice says: ‘As lyric poetry, Radnóti’s ‘postcards’ are subjective and imagistic responses to catastrophe at the moment of witness. However, they are not only testimony but also aesthetic artefacts’.

She concludes: ‘Poetry may include or quote testimonial elements, the “fabricated words” of its first-person address are always primarily aesthetic’.

Aesthetics also, however, generates the sentiment, including righteous anger and despair, as testimonial narratives do. As aesthetic artefacts, they employ a different route into the mobilisation of sentiment.

What one ought to worry about is not that these poems and poets may be obscure and forgotten, but rather that their images are so flagrantly resonant even today.

To read the poetry of the ghettos by those who lived (and died) there is to repurpose the role of aesthetics, as critics have argued. It also means seeing how metaphors employed and images put into words in these texts resonate across ages and contexts.

For poems continue to exist and be written.