Sometimes repetitive, occasionally slipping into cliche, Anu Gupta and Shalina Mehta's book is nevertheless an important addition to the documentation of Indian embroidery.

The phulkari was both an art form and a powerful means of self-expression for otherwise non-literate Punjabi women. Photo: Author provided

The sizzling, vibrant orange, ochre and pink satin-floss geometrics of Punjabi phulkari, once seen can never be forgotten.

That redoubtable 18th century Indian Memsaab, Flora Anne Steele, talking about the Phulkari embroidery of Punjab, called it “A work of faith, savouring somewhat of sowing in the red-brown soil.”

There can never be enough books on Indian Embroidery! No country has as many traditions and techniques, varying from region to region, community to community, as India, each uniquely itself but also unmistakably part of the Indian aesthetic. Phulkari too, its origins in Central Asia, was transformed by the culture and rustic dynamism of the women of Punjab into something distinctively Punjabi.

Anu Gupta and Shalina Mehta, the authors of Phulkari from Punjab: Embroidery in Transition, are both from the Department of Anthropology at Punjab University, Chandigarh. One did her PhD there and the other was a faculty member of 40 years standing. Anu Gupta is currently an assistant professor at the University’s Institute of Fashion Technology and Vocational Development.

Embroidery is a form of ornamentation and also earning for many communities; but equally importantly a needle and thread tells stories – of the flora and fauna, seasons and lifestyles that are the backdrop to the battles and dynasties listed in our history books. The appearance in a kantha or phulkari of a train, motorcar, or airplane illustrates the transition of transport from bullock carts and horseback to aviation more vividly than countless pages of prose.

Also read: The Threads of India’s Handloom Industry Are Being Gnawed Away at By GST 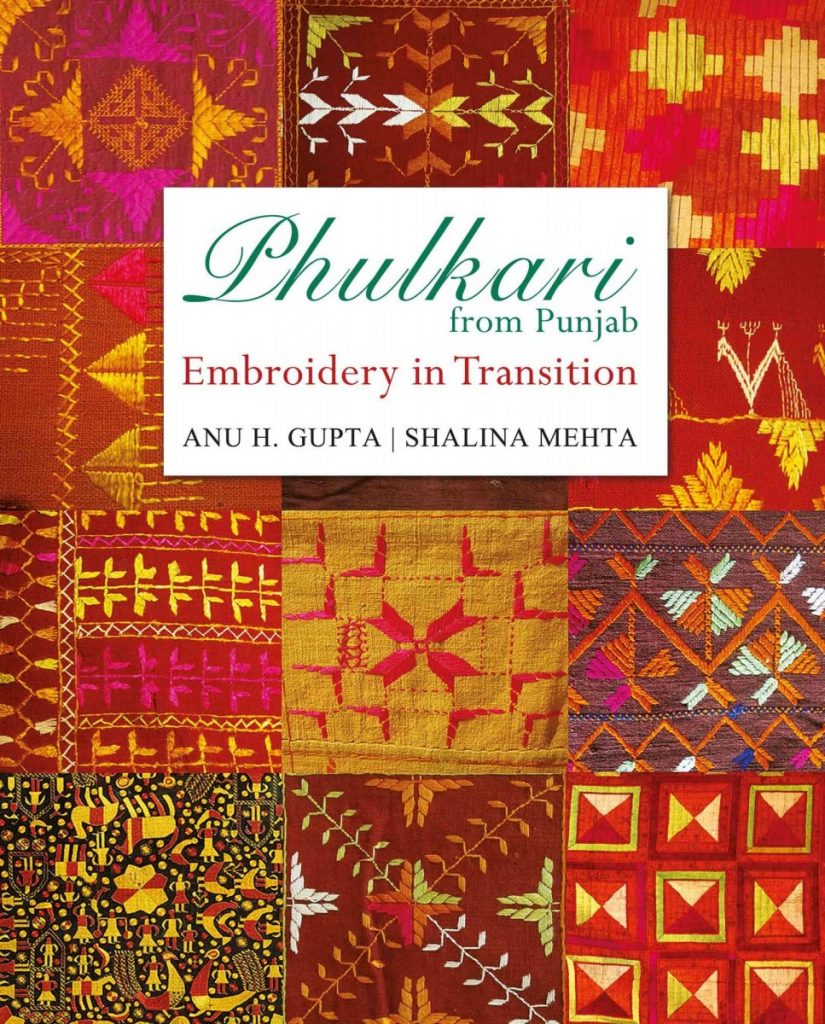 Over the decades the phulkari was both an art form and a powerful means of self-expression for otherwise non-literate Punjabi women. Guru Nanak in his scriptures stereotyped the notion of embroidery as a woman’s duty to establish her feminine worth (“Kadh kasida pahreh choli tan tu jane nari,”) but phulkari was much more than proving ones skills with a needle. As the authors say, embroidery could be subversive too, “translating unsaid emotions on fabric”. A phulkari ordhani was a heavy, all-concealing way of shrouding a woman’s shape and identity but the story its motifs and design told was all her own.

As Jasleen Dhamija wrote in her beautiful autobiographical essay in my book Threads and Voices, the traditional Baghs and Phulkaris were all about women. Not only did they spin the cotton and often dye the cloth on which it was embroidered, but they were the ones who designed and wore it.

They may never have travelled or seen the flowering gardens they depicted, but they created “their dream garden, their dream flowers” and “associated them with the ceremonies of rites of passage.” – marriage, childbirth, celebration… Even the embroidered phulkari of their shroud, dipped in the purifying waters of the Ganga, fulfilled “their desire  to be wrapped in their dream garden of flowers for their final journey”.

The story behind the stitches of Indian embroidery is both a parable and a paradox: craft traditions are a unique mechanism for rural men and women entering the urban economic mainstream for the first time, but they also carry the stigma of inferiority and backwardness as India enters a period of hi-tech industrialisation and urbanisation.

Phulkari is a classic example. Once an essential part of every Punjabi bride’s trousseau, a sign of her skills and upbringing, embroidery became a stigma that educated, wealthy girls should eschew.

As a result, authentic phulkari odhanis are seldom seen today. Most so-called phulkari (often from Haryana or Rajasthan) is a travesty – crude satin-stitch, the embroidery done from the front with the motifs block printed on georgette or voile, rather than with counted thread darning stitch done on the reverse of madder-dyed khadi, its threads hand-woven especially to facilitate the counted stitches. Each piece was a unique creation, with its own layouts and motifs, inspired by the dreams as well as the life of the maker.

Also read: My Mother’s Trauma of Partition Shaped How I View Pakistan

Eight-pointed lotuses and marigold flowers mixed with cotton bolls, cauliflowers and chillies, fields of wheat, goats and cows, and even jewellery and coins. Women churning butter, peacocks dancing, a scorpion or snake to avert the evil eye, a wedding party riding in a train, children flying kites…. Abstract geometrics combined with aspirational illustrations, each with its own song, women singing and stitching together. Charmingly if a visitor joined the group, she would add a motif or a few stitches, but in a different colour or idiom. 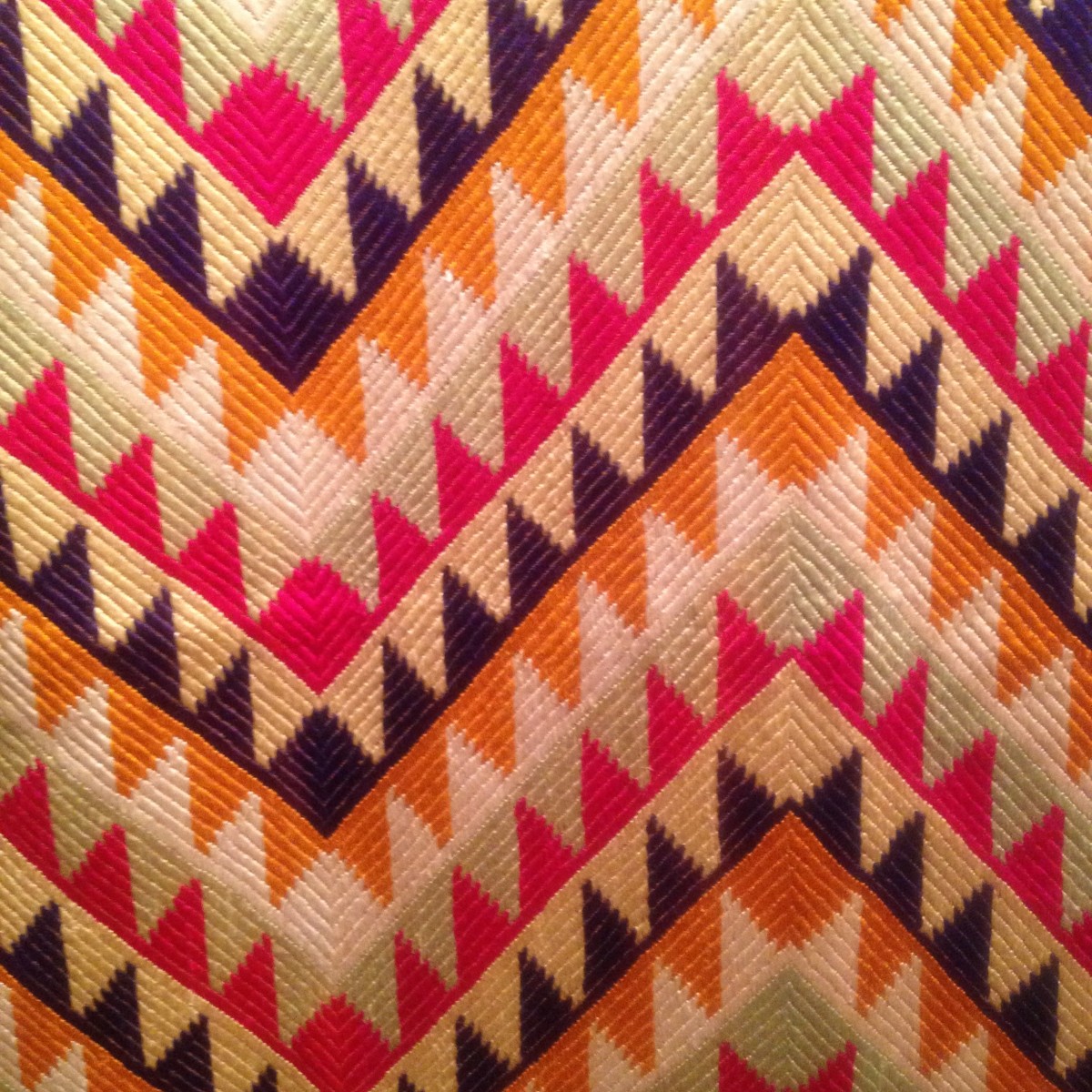 The best thing about Gupta and Mehta’s slim volume are the women who emerge from its pages. And the rituals the phulkaris were made for. Many books on craft describe the tradition, the techniques, the ornamentation, the objects themselves –  but forget about the makers. Without the who and why and when, the before and after, the story of craft remains lifeless. As is the case with phulkari itself. Now that the women themselves are no longer the creators, the embroidery has lost its joyous vitality and become mechanical.

Sometimes repetitive, occasionally slipping into cliche, Phulkari from Punjab: Embroidery in Transition is nevertheless an important addition to the documentation of Indian embroidery. Each thread is traced, from its origin to its final usage. The illustrations too, honestly portray the story of phulkari – both the glory of its heydey to its present decline.