Hugo Gorringe’s extensive fieldwork is the backbone of this well researched book, which is deeply empathetic and yet astutely observed. 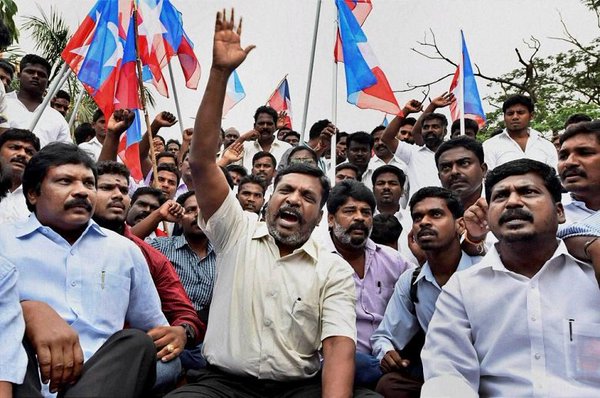 The Dravidian movement has dominated the Tamil political landscape for over a century. Their origin myth and raison d’être has been participating in social justice movements that seek to destroy the privileges of the erstwhile caste order. The figure of Periyar, mythologized as a militant anti-caste crusader, looms large over everything Dravidian. But much like how anyone who seeks decentralisation wants that process to stop at their level, caste emancipation in Tamil Nadu stopped with the Backward Castes who spearheaded the non-Brahmin movement.

The 1990s in Tamil Nadu saw Dalit movements reach critical mass. The Dalit Panthers of India (DPI) were among the most successful of them. It was a radical movement; its fierce and sometimes violent defence of Dalit rights is best captured in its slogan: Resist, Revolt. The DPI decided to boycott elections throughout the 1990s. But they were forced to rethink this strategy when it made them an easy target for police excesses. They were branded Naxalites and arrested frequently. In 1999, they decided to contest in elections after a long and fractious internal debate.

Hugo Gorringe in his book Panthers in Parliament: Dalits, Caste and Political Power in South India has profiled and captured the transformation of this movement from a radical outfit into a mainstream political party. Gorringe is a sociologist at the University of Edinburgh, who’s studied Dalit movements in Tamil Nadu for over two decades. As someone who grew up in Madurai, he has put his training in sociology and his knowledge of Tamil to the best possible use. It was Andrew Wyatt, another British sociologist, who gave us an analysis of the Tamil political landscape in his 2009 book Party System Change in South India: Political Entrepreneurs, Patterns and Processes. It’s telling that the best sociological works on Tamil politics no longer come from the University of Madras that had a famously good sociology department not so long ago.

Panthers in Parliament explores the institutionalisation of a truly organic and radical movement. It is at once a fascinating and heart breaking study. Some of DPI’s original activists from two decades ago, in Gorringe’s telling, are wistful to the point of being elegiac about the movement phase of what is now a political party called Viduthalai Chiruthaigal Katchi (VCK). They had serious reservations about contesting elections then; and are now convinced that entering the sewer of politics has tainted them beyond reproach. They hate compromises and loathe late entrants to the party – who are in it to gain material benefit. They find fault with Thirumavalavan, VCK’s leader, for no longer being as radical and focused on Dalit issues as he famously was in the 1990s. But in the end, most of them remain in the party. Thamizh Murasu, one such activist, when asked why he’s still in the party after all the criticism he’s put forward answers it best, “just because my father is [a] drunkard, it doesn’t mean he’s not my father anymore”. It poignantly captures the bond among the VCK cadre that made the movement what it was. For those unfamiliar with caste discrimination in Tamil Nadu, Gorringe captures it in its 21st century avatar. It’s both familiar and shocking.

According to the Dalit critique cited by Gorringe, the Dravidian movement is both intellectually dishonest and unoriginal. Iyothee Das, a pioneering Dalit intellectual in the late 19th century, laid the foundation for using Dravidian identity and social justice as a political plank in Tamil Nadu. But he, and all the other Dalits who contributed, have been written out of the Dravidian pantheon. The most significant aspect of this critique, however, is focused Periyar and his idea of self-respect. Self-respect, an idea that Periyar pioneered as Dravidian credo, is viewed as a way to shift the onus to the victim. When it is Dravidians, who are non-Brahmins themselves, that are the ones oppressing Dalits, what’s the point of teaching self-respect to the oppressed? Especially when the oppressor gets off without blame? This is a refreshingly original re-examination of a pillar of Dravidian ideology. 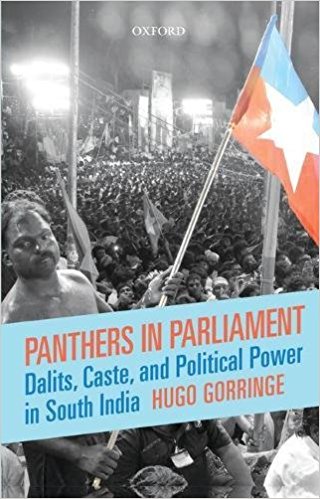 In a chapter aptly named ‘Doing Tamil Politics,’ Gorringe explains the moral universe in which Tamil politics operates. The culture is extraordinarily visual; even weddings and family events are celebrated by taking on to the streets with posters and hoardings depict photo-shopped images. How does a movement that just transitioned to electoral politics operate in such a culture? Even more crucially, the DPI looked at these forms of political engagement adopted by the Dravidian majors as tinged with caste hegemony.

M.S.S. Pandian’s biography of MGR makes a point of how MGR sought the blood of his cadre when he was ill and needed a transfusion. This was later used to state that he had the blood of the cadre running in him. It may seem absurd in retrospect, but ordinary Tamil voters took that seriously. They routinely killed themselves in large numbers when MGR fell ill or faced political difficulties.  It is in this political milieu that Thirumavalavan and VCK are “doing politics”. To eschew these established vehicles through which strength is displayed in the Tamil political sphere will only be construed as weakness.

In a culture where bravado, even if blatantly false, is rewarded, it’s impossible to practice politics that’s austere. Consequently, the VCK is now a party that does everything that Dravidian parties do as part of ‘doing politics.’ The movement phase saw messages on caste eradication and Dalit emancipation; that’s now been replaced with huge banners of Thirumavalavan, party flags and nothing else.

A criticism that’s been levelled against VCK is that they’ve reduced Dalit politics to symbolism and identity politics. But Gorringe’s fieldwork opens up the struggles of ordinary party members and how they view this approach as a vehicle to achieve dignity and equality. To have a flex banner in a street where Dalits weren’t allowed to walk is powerful in its own right. When asked about Dalit politics being reduced to symbolism and identity politics, an activist replies thus,

We cannot collect water at your taps; we cannot use the wells you do; we cannot walk on the paths you tread; we cannot wear shoes like you do, cannot cycle down streets like you, cannot have moustaches like you; we cannot keep male dogs that you keep; we cannot drink tea from the same cups as you; we cannot live in the same streets as you; we cannot get married in the wedding halls you use; above all, we cannot be cremated in the cremation grounds you use. Despite all of this we have never thought of splitting away from you; we wish to live in the same soil, country, village, street as you. We do not take pride in our identity as Dalits. When the country’s dust is steeped in caste and caste determines our life we need to stand against it. It is on that basis that we take up Dalit politics. It is for social change not identity politics.

Thirumavalavan at the centre of it all

Thol Thirumavalavan is profiled implicitly throughout the book. He has, however much he hates it, become an archetypal Dravidian politician. Despite being the most accessible and unassuming of Tamil politicians, he’s occasionally blamed by his cadre for being absent from protests. Gorringe explores this and rightly blames the party’s lack of second-level leaders for this problem. Thirumavalavan’s personal charisma and connections that he built during the movement phase have made the VCK a close-knit extended family. This was crucial in making it the formidable force it was in the 1990s and for successfully fighting for the Dalit cause. Paradoxically, Gorringe notes, it is Thirumavalavan’s accessibility that has become the reason for VCK being unable to build a second-level leadership.

People in remote rural villages know Thirumavalavan personally and expect to see him on the frontlines whenever there’s an issue. This stretches the leader thin. When someone else from the party visits an area for a community event or protest, people there aren’t satisfied. When Thirumavalavan accedes to these requests, it further undermines VCK’s second level leadership. If he doesn’t, he’s accused of having moved away from the base. The cadre dislike Thirumavalavan’s idea of holding elections for party positions; they want their leader to nominate people to party positions. All of these expectations are typical of a Dravidian party, where the party is merely a vehicle for a political entrepreneur, as opposed to being an organised movement. This is the sad reality of modern Tamil politics.

Accessing resources, or more of the same? 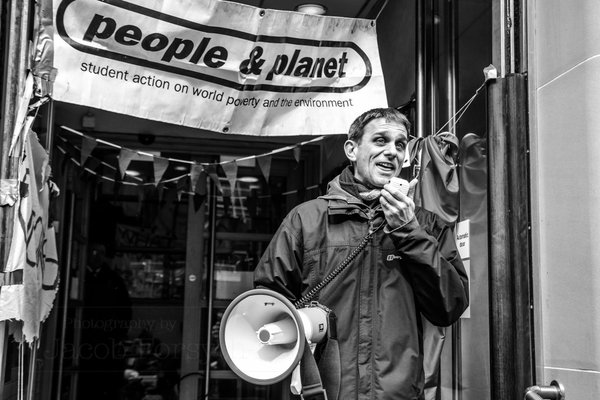 Hugo Gorringe speaking at a rally in Edinburgh in 2016. Credit: Twitter

Another dimension of institutionalisation is that the VCK now has access to informal networks of political power in Tamil Nadu. This informal institutionalisation, Gorringe explains, is often seen as a way to access resources by providing mediation that circumvents formal systems. The Dravidian parties, which have been incumbents for over 50 years, have always done it as a routine matter. However, the VCK has been criticised for adopting the same techniques. One of the important areas in which the VCK offers mediation is related to cases booked under the Prevention of Atrocities Act. This is problematic both in theory and practice.

In recent years, non-Dalits have been welcomed and given important party positions in an attempt to grow the VCK. This has left several long-time activists disillusioned. The charge against most non-Dalit new comers is that they are in it for the money. The reality of a first past the post system is that Dalits don’t have the majority to win elections and thus need the support of other castes to win. When the movement expands thus, friction is inevitable.

In trying to appeal to a wider set of voters who are not Dalits, the VCK, in the past decade, has taken up the plank of Tamil nationalism. Another deeply problematic aspect. Tamil nationalism is often a mask that caste parties, particularly those caste formations that are in direct conflict with Dalits, adopt. Dalits adopting the very mask that’s used by their oppressors comes at the cost of alienating some of the original activists. Worse, it betrays the original purpose of the movement, which is to fight for Dalit rights. This dance that a movement has to perform to gain wider acceptability and without alienating its core is complex and complicated. In the end, the effectiveness of this dance is what will decide the success of VCK. Gorringe quotes Mosse to sum the struggle up quite accurately,

“Empowerment depends upon political representation, but such political capacity is gained only at the cost of conceding power to a political system.”

Gorringe’s extensive fieldwork is the backbone of this well researched book. It’s deeply empathetic and yet astutely observed. His grasp of conversational Tamil, good enough to speak on stage at a political rally, seems to have truly helped him gain the trust of his interviewees. The future of the VCK, one comes to realise as one reads the book, is intertwined with the future of Tamil Nadu. The success of Dalit movements, like that of the Dravidian movement in the 20th century, is likely to shape Tamil politics for future generations.