Through talking to many of the participants of the 1988 operation, Sushant Singh paints a picture that is both informative and readable. 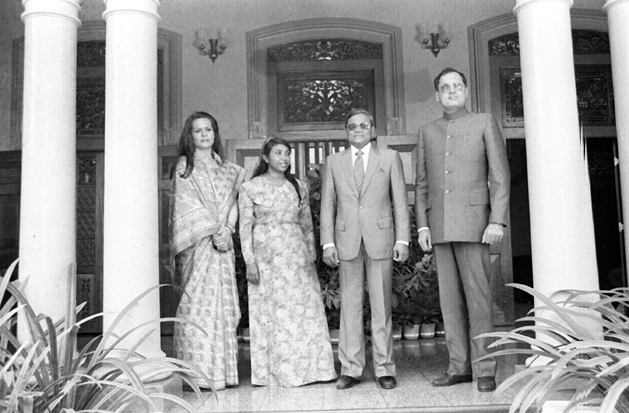 Photograph of Rajiv Gandhi and Sonia Gandhi with Maummon Abdul Gayoom and Mrs. Gayoom at the official residence of the Maldives President at Male of February 7, 1986. Credit: Photo Division

Sushant Singh’s slim volume Operation Cactus: Mission Impossible in the Maldives (New Delhi, Juggernaut, 2016) tells of India’s intervention to save the then president of the Maldives, Maumoon Abdul Gayoom from a coup attempt in 1988. The story hearkens back to the time when India first learnt what ‘out-of-area contingencies’ were all about. The coup was carried out by Sri Lankan Tamil militants on behalf of the Maldivian businessman Abdulla Luthufi.

The Indian Peace Keeping Force (IPKF) operation in Sri Lanka was escalating and when the crisis hit the Maldives, there were no ‘ifs and buts’: New Delhi was ready to go. Singh tells us the story of how troops took off from the parachute regiment base in Agra, took an almost five-hour flight and touched down at Hulhule airport, one kilometre across the lagoon from Male, just 16 hours after the government of India received an SOS from the besieged president in Male.

All this happened in an era when India’s relations with the West were changing, thanks to Rajiv Gandhi, who, as prime minister, had little time for the shibboleths of the past. Relations with Washington had dramatically changed for the better after his visits in 1985 and 1986. Washington actually began to encourage India to play a bigger role in its neighbourhood (save for Pakistan).

So when Indian forces were despatched to the Maldives, there was tacit Western support. The Indian aircraft reportedly received some help through meteorological information sent by a passing US warship.

What was remarkable was that many of those on the rescue mission had only a hazy idea of where Maldives was. Indeed, the military did not even have a decent map of the area. In so doing, its experience in Sri Lanka a year ago was being repeated, when it had to use tourist maps to operate. In this case, given the remoteness of the Maldives from Agra, not even tourist maps were available, only a coffee-table book.

Equally unprepared was the parchute brigade, which was in its peacetime location. Getting a force up to scratch and flying it nearly 2,700 kilometres to Male within a matter of hours was no picnic. Yet, despite the hurdles, the operation was launched. The challenge here was the small size of Male and the lack of space for paradropping. Neither was there any guarantee that the force would be able to land in the postage stamp-sized airport at Hulhule. An attempt to capture Hulhule through a paradrop would be a hazardous operation with the danger of the parachutists drifting out to sea.

At this point, the Tamil militants seeking to overthrow Gayoom made their first and last mistake. They did not take over the airport. A mere truck in the middle of the runway would have complicated the Indian effort. Since fortune favours the brave, the Il-76 aircraft was able to land and the paratroopers able to cross the lagoon, take on the mercenaries in Male itself and secure Gayoom.

There was more drama to come, involving the third of the Indian services – the navy. Luthufi escaped in a small vessel, which the paratroopers managed to damage but not stop. Subsequently, INS Godavari was despatched to track it down and capture him and the mercenaries. Through talking to many of the participants of the operation, Singh has been successful in painting a picture that is both informative and readable.

Recalling the story of Operation Cactus is important today, when events similar to the ones that preceded the coup are roiling the politics of the tiny island state.

At that time, the former president Abdulla Nasir was accused of being the real mastermind of the coup. Recent turmoil has consisted of the ouster of democratically elected President Mohammed Nasheed by Mohammed Waheed Hassan, followed by Gayoom’s half-brother Abdulla Yameen. Nasheed is in exile in the UK. Yameen recently accused his own vice president, Ahmed Adeeb, of attempting a coup and imprisoned him. Yameen has been reaching out to China – a matter of concern to India.

From the military point of view, there are important lessons that Operation Cactus offers us, the foremost being the need to be ready for such contingencies through advanced planning, exercises and linguistic skills.

The Indian Ocean is becoming more important by the day and India has vital stakes in its stability. The small island states in the area are vulnerable to the kind of threat that compelled India to send its paratroopers in 1988 on behalf and at the invitation of an elected government. There have been similar threats in Mauritius and Seychelles.

Future contingencies may not be that clear-cut but what is important is to have the tri-service capability of quick reaction. The states in the region trust India, which is the flag-bearer of democracy and an upholder of a rule-based approach to international relations.

Operation Cactus: Mission Impossible in the Maldives is available on the Juggernaut app.

Manoj Joshi is Distinguished Fellow at the Observer Research Foundation.